EOS is now hot and the EOS is now congested, and the CPU price has increased by 1300 times.

On November 8, EOS is still in a congested state. The EOSpark data shows that the current CPU price of the EOS main network has reached a peak of 10EOS/ms, and the price has increased by 1300 times compared with a week ago (the CPU price was 0.007634 EOS/ms a week ago). According to IMEOS, most EOS users are currently unable to conduct trading operations, and need to use a third-party account to help with mortgages in order to suspend the status of the account "catch".

It is reported that the EOS congestion incident originated from November 1st, the new project EIDOS token of AidenPearce, the founder of the original avocado project, made an airdrop on EOS.

In response, some users have proposed "new governance… stop voting, stop trading, stop BP collusion, and only allow one vote per token."

EOS resource design is based on the user having a certain amount of tokens, free use of a certain proportion of network resources, EOS system mainly contains three resources, namely network bandwidth resources (NET), CPU computing resources (CPU), running memory resources (RAM ). Among them, the CPU is one of the resources consumed by the user when making a transfer or transaction.

In the EOS network, when the number of EOSs used to exchange CPU resources suddenly increases, the available CPU resources corresponding to one EOS are reduced. For example, if a user exchanges 10,000 EOS mortgages for 10 minutes of CPU, if the CPU has a surplus, if the DAPP team mortgages a large number of EOS, this will result in a reduction in the available CPU resources per EOS, ie 10,000 EOS. The mortgage exchanged the CPU for less than 10 minutes. In addition, if the collateral of the main network decreases, the CPU resources allocated by a single EOS will increase, which will also lead to an increase in the total quota.

According to EOSTitan data, the EOS CPU usage reached a peak of 35.82% on November 1 and is currently down to around 20%. On November 1st, the CPU cost was 130ms/EOS, and the current cost was 0.1ms/EOS. 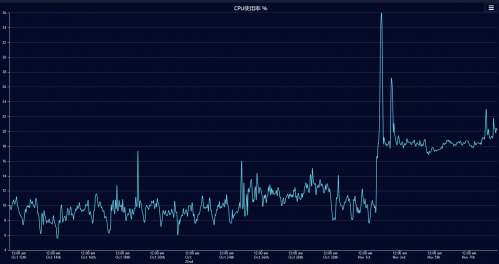 If users get more CPUs, they need to increase the total quota, that is, mortgage more EOS to get more CPU usage; or wait for CPU resources to recover, the general recovery time is 4 hours.

At present, the allocated memory on the EOS network is over 50%, REX has been lifted by 83.33%, and the EOS price has dropped slightly. The current price is $3.49.

Observation | Support the research and application of digital currency, why is it Shenzhen?

Blockchain and other patent application examination specialities are regulated

Dunamu CEO: Korean cryptocurrency exchange is embarking on the implementation of FATF guidelines

Bitcoin returns to the 2017 bull market? No, it’s better now, there are 8 reasons here.