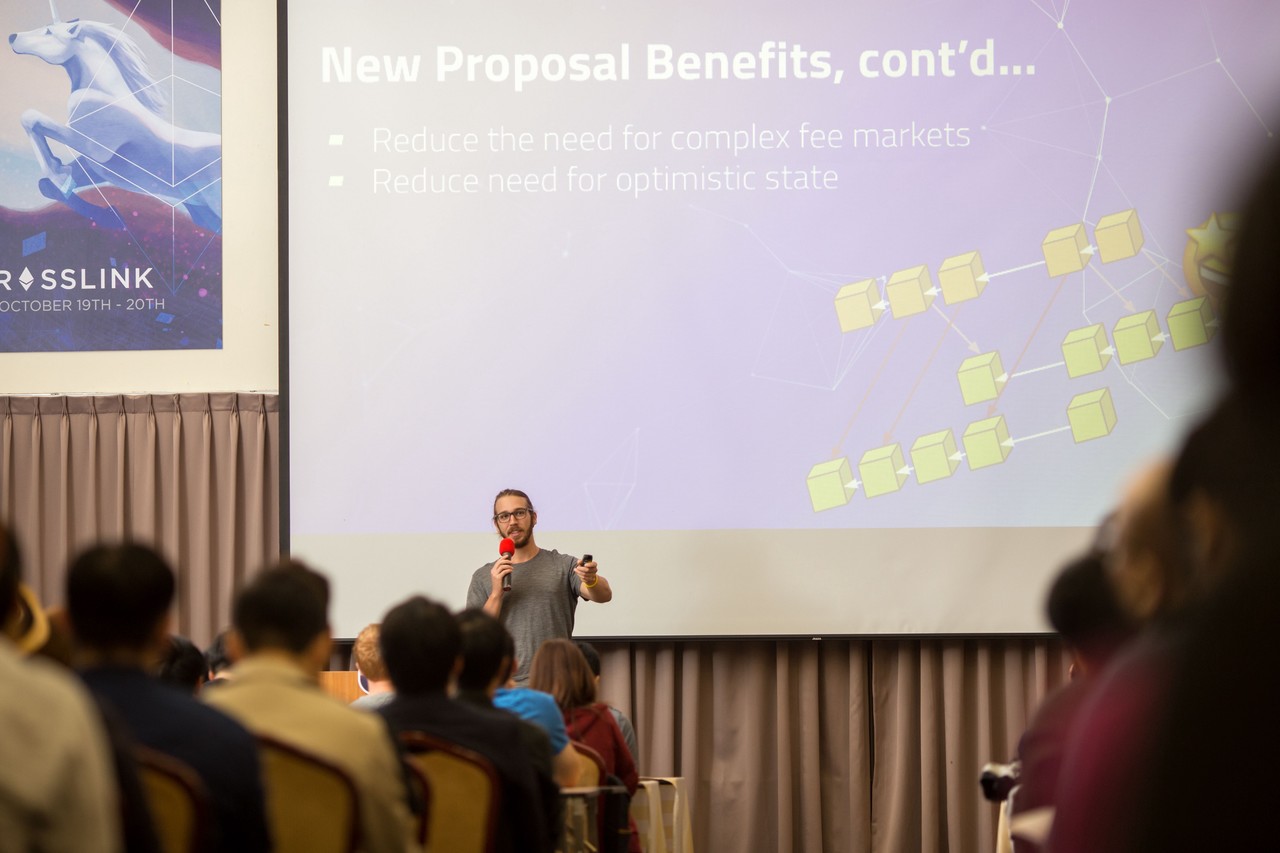 Crosslink 2019 Taiwan , held at the Taipei Shibuya Convention Center in late October, attracted blockchain enthusiasts from all over the world. On the first day of the agenda, Danny Ryan, the core researcher of the Etherium Foundation (EF) , was invited to share the current research direction and challenges of Ethereum 2.0. The Ethereum 2.0 architecture, new sharding proposals, Execution Environments (EE), and Two-Way Bridge issues.

I. Architecture of Ethereum 2.0 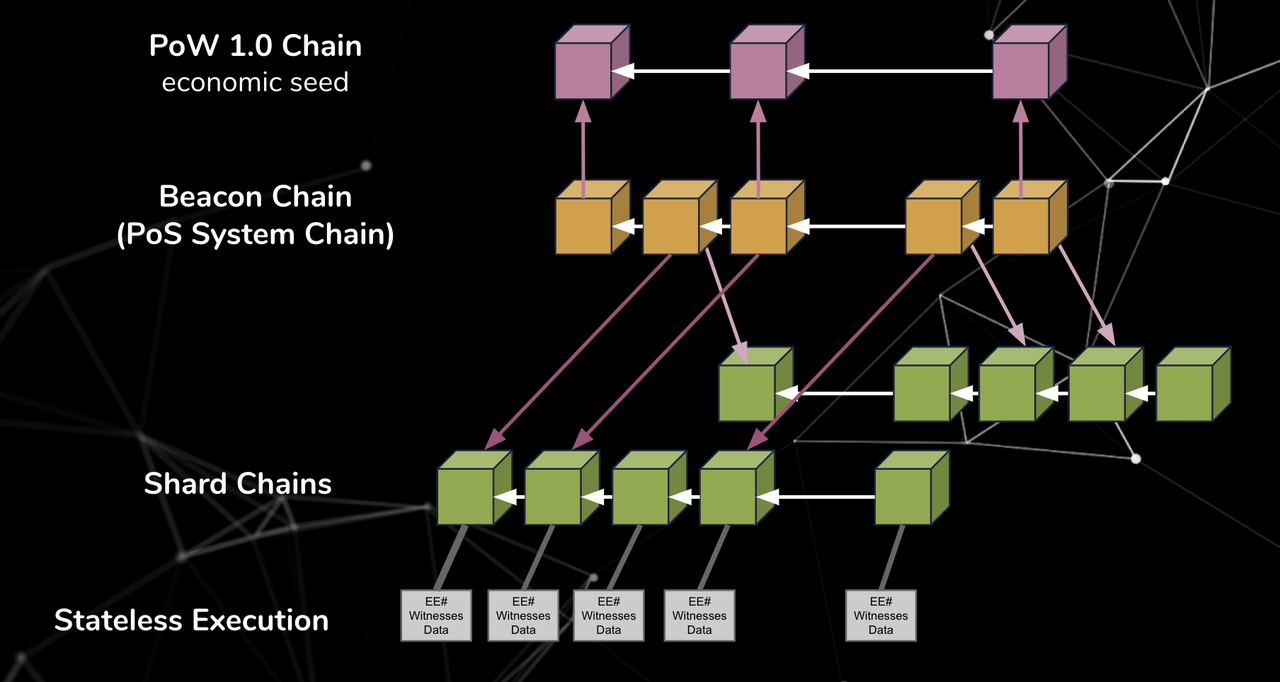 In the first phase , Shard Chains will be added. At this stage, the data structure of the slice chain will be mainly focused on, as well as its validity and Consensus. The segmentation chain is only used as data at this stage. Chain does not specify a state chain execution (State Execution) or account balance (Account Balances). This is more like testing the slice structure instead of trying to use slice to extend the beacon chain. At this stage, the beacon chain treats the block of the slice chain as a collection of features or meanings (Collections Of Bits). Ethereum 1.0 and Ethereum 2.0 will still exist and will be tested and migrated on the Ethereum 2.0 chain.

At this stage, the fragmentation chain will be cross-linked with the beacon chain (Crosslinks) , and the current state of each fragment, " Combined Data Root ", will be periodically recorded in the "Beacon Chain" block as cross-linking. . After the beacon chain block is completed, the corresponding shard block will be considered completed, and the other shards will know that they can rely on these blocks for cross-slicing transactions.

The second phase will start with all the functions. In the second phase, the fragmentation will be completed. The fragmentation chain will transition from a simple data container to a structured chain state and will be reintroduced into the smart contract. Each shard will manage virtual machines based on eWASM (Ethereum flavored WebAssembly) . It supports accounts (Accounts), Contracts, States, and other abstractions we are familiar with in Solidity. It is expected that tools that are familiar to you before the second or second phase (eg Truffle, Solc) , Ganache) needs to be converted to support eWASM version, Ethereum 1.0 and Ethereum 2.0 can be interoperable by two-way bridging, there will be scalable Layer 1 execution, by stateless execution to improve execution speed. 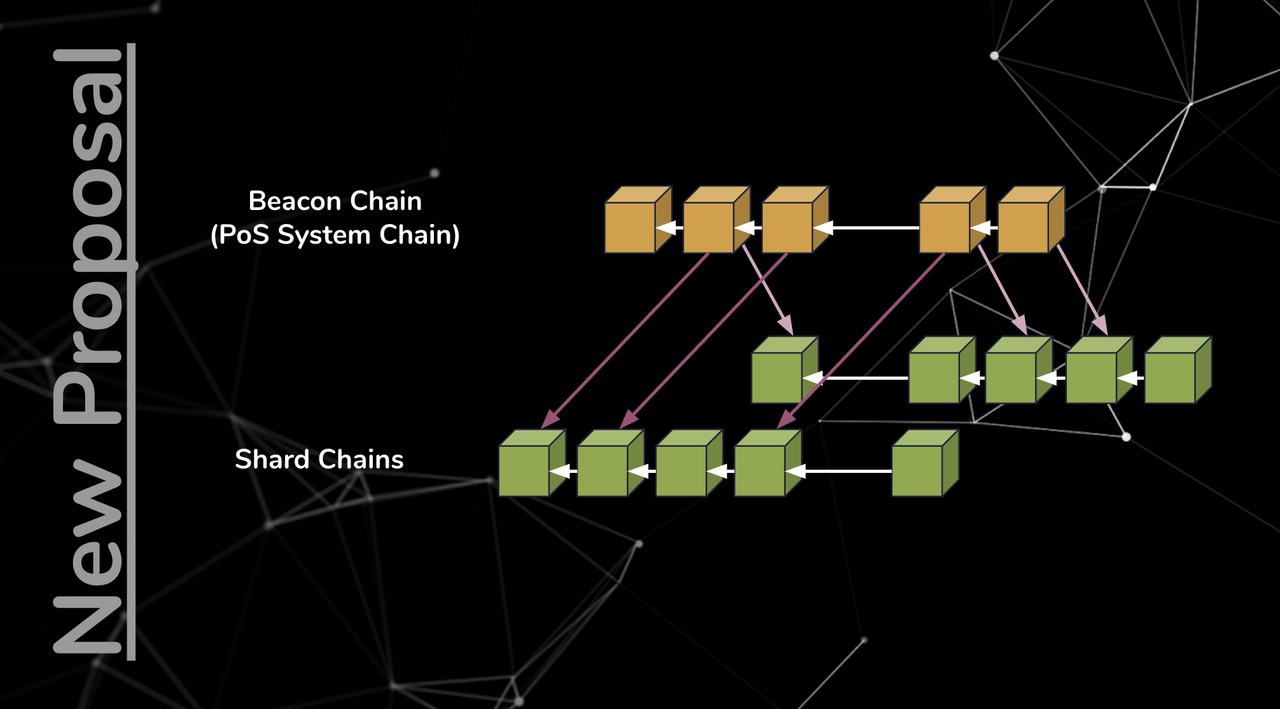 The mechanism under which Ethereum 2.0's original proposal operates is to perform cross-linking operations in each period (Epoch) , with 1024 slices (Shards) per chain, when cross-chain trading (Tx) is required. Because there is a long delay time for cross-linking in each period; the new proposal is updated to cross-link every time period, and the number of Shards is reduced to 32 to reduce cross-sharding ( Cross-Shard) The delay in trading, with cross-segment trading at each time.

Advantages of the new proposal

For the advantages of the new Ethereum 2.0 proposal, the number of new proposals (Shards) was reduced from 1024 to 32, which reduced the complexity of the operation, because the time between fragments was reduced from one epoch to one slot, and the time was shortened. The benefit is a better experience for DApp developers and users. In the original Ethereum 2.0 design, a complex fee market model and an optimistic solution were required to achieve Cross-Shard Transaction Fee. But the new proposal changed the design of the execution environment, making the original complex model greatly simplified.

The new proposal only needs fewer pieces (Shards) than the previous proposal , and the transaction can be started. There may be a longer slice time (12s), a larger slice block (Shard Block) , which is currently updated to the zeroth. At the stage, the test of the Zeroth Phase Test Network (Testnets) may be delayed, and the new proposal reduces the time required for the release of the zeroth phase.

I hope to give developers and users a better experience, using larger Shard Blocks to improve data availability and reduce development delays and time spent in the zeroth phase release. 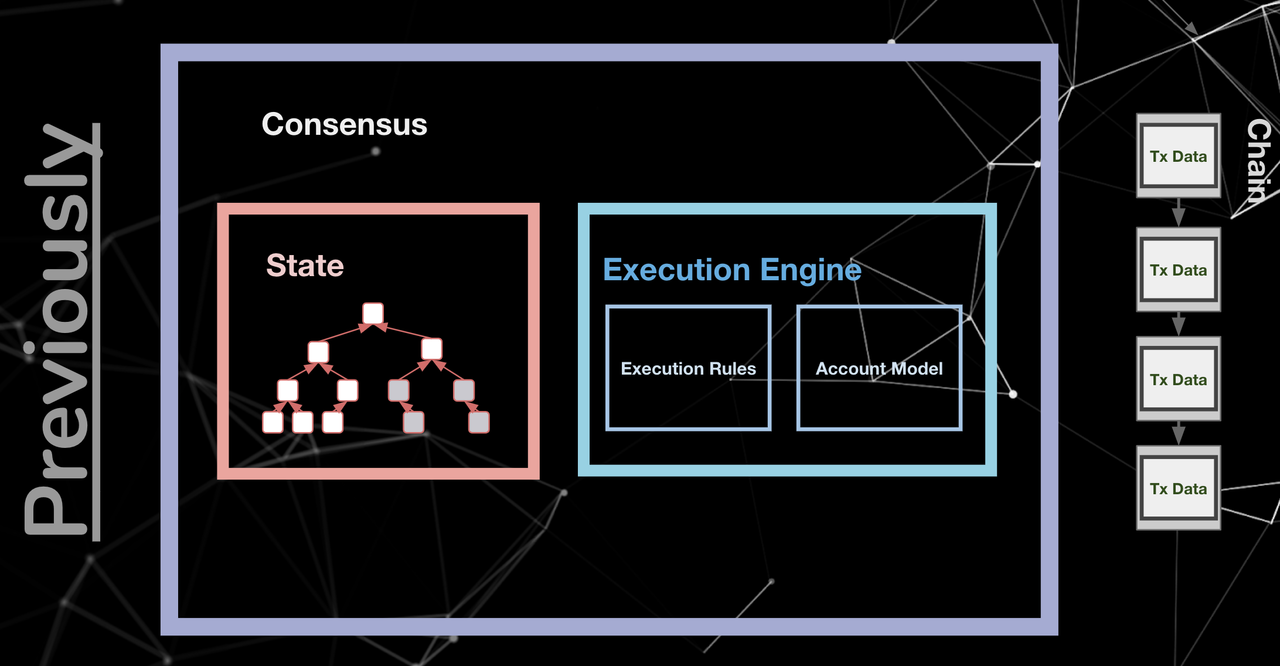 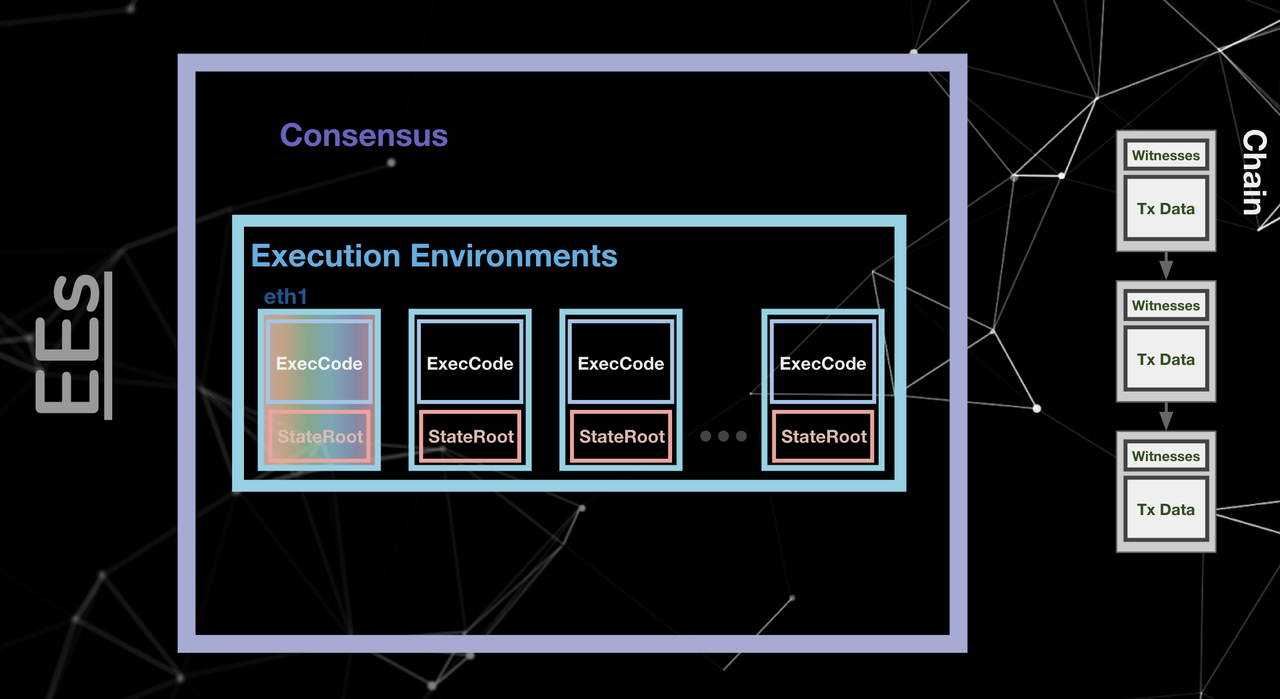 In the Ethereum 2.0 simple architecture diagram we can see the state root, which may be a 32 Bytes blob with the WASM Execution Code , which can be used to make detailed settings in the user hierarchy. There is a chain to the right of the picture. There is general transaction data and Witnesses on the chain. The witness is actually displayed in the database block. You need to execute the transaction for this status instead of the database, and you need to prove the data for the current The status root is valid. For example, if we want to pass a value between Account A and Account B, assuming we move 5 Ethereum from Account A to Account B, we can't directly say that the account and Balance are actually available. In the process, we Witness Data is required to prove the current status of the two accounts. The status root can modify and update the status tree when the execution code is executing transaction data.

The execution environment has many advantages. Compared to the old system, it may be able to bring products to market faster, because we don't have to wait until the core consensus is introduced before we can research and develop this concept. There will be fewer obstacles in Layer 1. It can use an execution engine with high scalability and data availability in a variety of applications, so this core infrastructure layer will be used for a long time in the future.

Virtual machines can have potential fragmentation issues that can affect transaction speed.

All current research is developing positively, and there is plenty of time to try and better understand the design space. In the future, it will take more time to build a better execution environment communication mechanism. Overall, the current stage of progress is an important milestone for the future.

In the proposal that the speaker mentioned earlier, Ethereum 2.0 originally had a one-way bridge, so you can switch from Ethereum 1.0 to Ethereum 2.0, but the original architecture does not allow for return, mainly for several reasons. This requires us to closely integrate the development of Ethereum 1.0 with the hard forks of Ethereum 1.0 and Ethereum 2.0, and put the two systems at risk of mutual influence, so the team believes that Ethereum 2.0 is released and stable before It is not wise to tightly couple the two sides.

At the beginning of the month at Devcon 5 in Osaka, Japan, the issue of bridging was widely discussed. The original One-Way Bridge model had the problem of verifier liquidity and, more importantly, it might Will trigger an alternative issue between Ethereum 1.0 and Ethereum 2.0. If we allow liquidity on Ethereum 2.0, then some form of transfer mechanism will fork Ethereum 1.0 to Ethereum 2.0. Or, it is generated before the two-way bridge. It is likely that there will be two coins at the same time. The team and the entire certifier community are worried about this problem. Currently, we are looking for ways to alleviate this problem.

This route requires BLS-12–381 in the actual EVM, which takes a lot of development time and it only provides lightweight client- level (Light-Client) level security. When the verifier generates a receipt for the withdrawal transaction on the 2.0 chain, we will get the Ethereum 2.0 lightweight client certificate. Once the receipt block is finalized on Ethereum 2.0, you can do it at Ethereum. Withdrawal on the contract of 1.0. However, this may not be the route the team ultimately chose.

The second route will run the full node of Ethereum 2.0 on the Ethereum 1.0 node. This route allows us to use the finalization mechanism, so we can not only use this mechanism to promote Ethereum 1.0 and Ethereum 2.0. The transfer between us, we can also use the security of the verifier to protect the Ethereum 1.0 chain, I think everyone is very excited about this, which is often called the "Finality Gadget Proposal".

But there is still a need for a mechanism to export the Ethereum 2.0 state root to Ethereum 1.0, so there are some discussions in the Ethereum 2.0 community that studying how to implement it may include a miner mechanism.

Another advantage of exporting the Ethereum 2.0 state root is that Ethereum 1.0 has a solid mechanism to achieve it, and with the high scalability and data availability of Ethereum 2.0, you can do some interesting applications like ZK Rollup and Optimistic. Rollup.

If you are on the exchange, list Ethereum 1.0 Ethereum and Ethereum 2.0 Ethereum, they should be the same price. If it is not the same, you can buy an Ethereum at a lower price, send him to the bridge, then get another Ethereum at a higher price and sell it. This arbitrage keeps their prices constant, which can be confusing for users, verifiers and developers. Two-way bridging prevents both sides of the currency from interchanging by arbitrage.

However, there are still some trade-offs here. Despite the confidence in the design of Ethereum 2.0, the team hopes to be validated in the production environment before it affects the safety and risk profile of Ethereum 1.0.

Two-way bridging is a tightly coupled consensus mechanism. The attack on both sides of the chain and the problems that arise will affect the other side of the chain. The development of the agreement is bound to be very cumbersome. We need to consider the security of each agreement if we The sooner the protocol is developed, the less progress we actually have. As each obstacle develops over time, they will block each other, which makes Ethereum 1.0 develop much slower than Ethereum 2.0 at this point. Because the actual user community has a lot of concerns and requires a lot of coordination, we can get hard forks on our production network.

So, if we put these things together, the slower the development and forking cycle of Ethereum 2.0, and this adds some extra overhead. In other words, the overhead of verifying that we can link the client is relative. of.

We should enable the bridge before adding the verifier's liquidity, but will wait until the first stage of the product is stable and then open; similarly, there are many related studies at the same time, which may affect when and complete the operation. .

This article was first published in the Medium station of the Taipei Ethereum Meetup. EthFans was authorized to reprint. In order to comply with the habits of mainland readers, the simplified and traditional conversion was carried out and some terms were changed to idioms.

Morgan Creek founder: too many people try to beat Bitcoin, but Bitcoin has become stronger

Bitfinex CTO: Large change of 120,000 BTC is indeed an internal address move of the exchange

Vice President of China Academy of Information and Communications Technology: Blockchain and other promising prospects can empower traditional industries