If 2019 is almost a stand-alone platform currency, let me think about " What is value capture? " and " What can tokens carry? ", then the next question is "Does the exchange have boundaries?"

Multicoin believes that the exchange will promote the adoption of open finance, and after a lot of liquidity and capital are pooled, the forked DeFi application becomes possible ; an exchange is strategically building something much larger than a cryptocurrency exchange: In the future of finance, it is striving to become the core of the global open financial system .

I think that Multicoin's point of view in the series is worth pondering. I am inspired by it and the activities of "Babbit and TA's friends – the exchange's new game, high salary or high risk" . I will guess the future of the exchange in this article. To a fork in countless possibilities. In order to pay tribute to the milk king, the title of this article will be "Exchange is the public chain platform."

My current point of view is:

The exchange is the first entry to capture users

This can of course be attributed to the current lack of truly available products, and the DApp user threshold is too high; but is borderless currency not the most successful application case now?

Tokens can realize the circulation of the public chain or DApp economic system. When the value of the whole system is increasing in the positive direction, the token may appreciate. Many exchanges and DApps on the exchange can be regarded as a cross-chain in the middle. Pieces (docked with various public chains and DApps, directly to users), when the value of these tokens grows, the exchange can capture value from it – currency transactions

The public chain and application may fail. After a lot of trial and error, it is possible to explore a truly usable track. Currently there may be only one and a half applications, half of which is DeFi, and one is borderless currency; maybe the derivatives exchange can be without borders. Capture value in money? – Derivative Transactions

How to enter the crypto asset market? Exchanges such as Coinbase support the French currency channel, a basket of currencies, etc., as well as a peer-to-peer over-the-counter trading platform – OTC

The exchange will play a more important role in the future

The exchange did not stop the pace of its own acquisition and investment in other start-up projects. Coin's acquired the encrypted wallet Trust Wallet and the derivatives exchange JEX, issued a stable currency BUSD; Firecoin and Nervos jointly launched a financial support to support the chain compliance and regulatory framework Chain; Coinbase acquires the institutional business of Bitcoin hosting service provider Xapo…

These features will be superimposed on each other, exploding a huge network effect. For example, when the OTC is carried out in the currency, you can open a contract of the same value at the futures station to hedge the risk. This has the potential to make the user's probability of leaving lower and more competitive than a single-featured platform such as Localbitcoins. Even create new application scenarios.

There is reason to believe that the threshold for the opening of the new exchange will become higher, the second and third tier exchanges will be under more pressure, and the head effect will become more apparent.

For a new platform, the first question is: Why are you? Why is a new platform with shorter time, fewer users, worse depth, higher trust threshold, and higher rates?

In the head exchange directly through the capital to swallow the upstream and downstream, the network effect continues to increase, while the PoS wave is quiet.

In the next year, the giant PoS projects such as Polkadot and TON will start the main network. Look at the EOS node of the predecessor EOS : OKEx ranks second, the EOS node ranks first, and the first five nodes of EOS are the exchanges.

Almost all head-to-head exchanges have launched PoS's Staking service (which may be standard on the exchange in the future), and users who have exchanges on the exchange's PoS tokens can directly receive inflation incentives; Polkadot, TON, etc. all use chain governance mechanisms. (The holder of the currency decides the network proposal by voting), Polkadot proposed the NPoS mechanism to try to solve the problem of the rich getting richer, but the effect remains to be seen.

The fully functional Ethereum 2.0 (Phase 3), if progressing well, may be launched by the end of 2021, leaving the time window for other public chains for two years.

On the last day of October, Gavin Wood wrote "Polkadot, Substrate and Ethereum" , saying "will bridge the Ethereum ecosystem to help expand the functions of both parties" just to cover up a purpose – to steal from Ethereum value.

There is no doubt that Ethereum has an advantage in the public track, so how can we overcome it?

I believe that the success or failure of a blockchain project is determined by multiple factors, such as technological innovation, network effects, and economic incentive models. The three interact and transform: According to these three points, the technology of the exchange's public chain is not innovative, and it is more modified and improved on the basis of the existing public chain; and the economic model of most exchanges is not open enough, but only as a function. Tokens (deductible deductions, etc.) and profit mapping (repurchase or destruction, etc.), while the head exchange tokens have some currency attributes (IEO, etc.), it is not clear how deflated platform coins can effectively Drive the entire network to achieve a virtuous cycle .

However, it can be seen that the network effect of the head exchange is extremely strong, and a large number of users and capital have been collected. The evolutionary path of the head exchange: spot exchanges – superimposing other functions – as a cross-chain middleware to steal value from other blockchains and applications – delivers users and value to their own public-chain platforms . 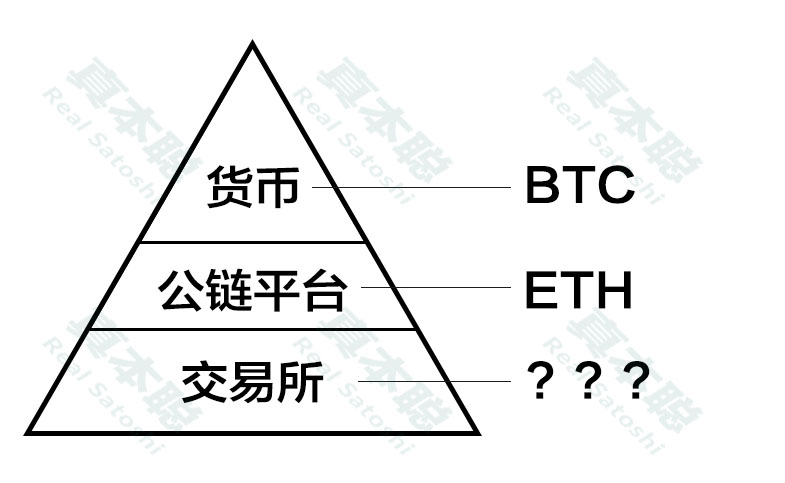 The ideal evolution path of the exchange: the exchange – the public chain platform – the currency

In the midst of it, some black swan events are also variables: the explosive growth of the coin originated in 94; the upgrade of ETH 2.0 may cause applications and assets to be frozen (VB says "almost no disruption") , currently ERC20 version The USDT accounts for 44% of the total share. If it is frozen, who will win this part of the market in a short time window? ……

Who is the market share of the exchange's public chain?

The goal of the head exchange's public chain is Ethereum, but I have deep doubts about whether they can achieve this.

A large number of small public chains lack users and trial and error cases to die, HPB returned the project to the community, and many Zilliqa founders announced that they would leave another stove… The exchange has a large number of users who are likely to create new application cases that will accelerate Shitblockchain The deaths directly devour their market share.

The weakness of the exchange's public chain

Most of the existing exchange business is centralized, and there is a single point of failure. Due to the high capital reserve and high profit of the head exchange, credit guarantee can be carried out, and even if an accident occurs, it can be paid.

Some small public chains claim to be decentralized (also convenient for the founding team to shirk their responsibilities), but in reality they lack users (most of the tokens are in the hands of a small number of people), and the security needs to be verified. It is not as reliable as the centralized exchange. .

Optimists will think that exchanges that have provided credit guarantees in the past are more likely to be trusted in the future, and pessimists will believe that past experiences do not apply to the future and should remain vigilant and skeptical.

The regulatory pressure on head-to-head exchanges will be growing, potentially having a huge impact on their existing business or rewriting the existing exchange landscape. If licenses are issued in some regions, there will likely be multiple local markets separated from each other.

This may also be the driving force behind the transformation of some exchanges to the public chain platform. Innovation is likely to open up new markets, but it may also fail. It is unclear what impact regulation will have on the exchange's public-chain platform.

3 ) Not enough to decentralize and open, security has yet to be verified

The existing exchange public chain has only taken a small step on the decentralized road. Most of the team decisions are made by the company, and the relevant ecological construction is mostly driven by investment and IEO. The community spontaneously builds. There are very few cases of application.

How to attract more developers and applications, how to become a more effective open ecology, how to achieve decentralization and security, are urgent problems to be solved.

Its return will be rich enough, so how big is the probability of occurrence?

There are a lot of conjectures and assumptions in this paper, and some of them lack rigorous logical relationships and are for reference only. If you have other opinions, please welcome Weibo private letter @ blockchain barley to communicate with me.

Media: Interesting APP is a blockchain chain, but it is a pyramid scheme.