More and more hype about the upcoming bitcoin halving, halving is scheduled to happen in May 2020, about 190 days from now. This information is well known, and the number of bitcoins awarded to miners will be halved every four years, and the third is halving.

Currently, approximately 1,800 new bitcoins are produced each day, and every time a block is mined, the miners receive a reward of 12.5 BTC, which will drop to 6.25 in May next year.

Due to the lower incentives for miners, they will stop mining or retain their own bitcoins until the new price compensates for the cost involved in mining. Similar to other commodities/assets, the supply and demand of Bitcoin will change in tandem, creating a new equilibrium price for the increasingly scarce asset bitcoin.

This will be the third halving of Bitcoin. The first time was in November 2012, the block reward dropped from 50 BTC to 25 BTC, which had a huge impact on the price of Bitcoin. The second time was in July 2016, which triggered a bull market that lasted for a year and a half, bringing the BTC price from around $650 to nearly $20,000, which is still the highest level ever.

Of course, many people familiar with the field of cryptocurrency saw the potential for profit before halving, and began to change their positions for a long time before the incident. The following BTC historical price chart clearly shows the price increase before and after each halving:

Bayern LB has applied a stock-to-flow ratio to predict bitcoin prices after halving next May, which is often used for commodity analysis. (First class note: inventory flow ratio = quantity of existing goods / quantity produced per year)

The inventory-to-traffic ratio of gold is 58, and bitcoin is 25.8. After halving, the number increases to 53 . Based on this model and studying the price behaviors that have been generated around the halving event in the past, they suggested: “If the inventory ratio of Bitcoin in May 2020 is included in the model, the price of Bitcoin may reach $90,000. This means the upcoming The halving effect has not yet been reflected in the current price of Bitcoin."

In fact, Bitcoin is not the only cryptocurrency in which supply growth is slowing.

The supply growth of a series of altcoins will also decline in 2020-21, and some of them have dropped this year. From this year to the next year, the inventory ratio of many mainstream cryptocurrencies has fallen sharply. In theory, if demand remains the same, their prices should rise.

Ethereum does not have a hard supply ceiling like Bitcoin, but after the hard fork of Constantinople was finally implemented on February 28th, the block reward was reduced from three ETHs to two. In theory, this has led to a 33% drop in new supply per year for Ethereum and a new circulation of approximately 4.5% per year for Ethereum.

By 2021, with the launch of the Serenity phase of the Ethereum, the growth of Ethernet supply is expected to decline further by 75%. The upgrade of the quiet phase of Ethereum will introduce fragmentation, PoS consensus and many other upgrades. The quiet phase will be set to be carried out in three phases. Once the third phase is reached, the ETH's increase will be slowed down. 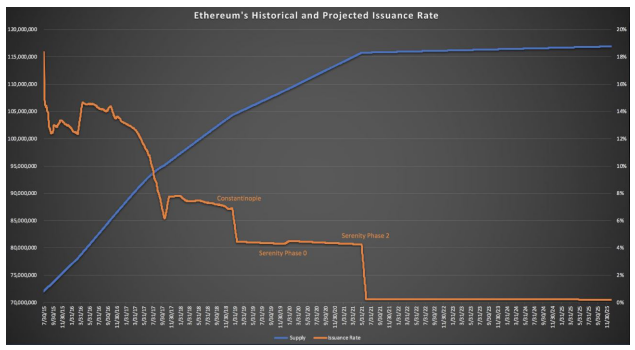 (First class note: blue is the supply curve of Ethereum, orange is the inflation rate)

This downward trend seems to continue into the fourth quarter and next year. Ripple said unequivocally, "Looking forward to the fourth quarter, we will continue to pay close attention to changes in trading volume and intend to maintain similar practices. The transaction volume in the fourth quarter will be comparable to that in the third quarter." Having said that, the price of XRP There is no positive response to reducing the XRP.

However, bitcoin cash lacks historical data to show that its price will be significantly affected by a halving. However, from a structural point of view, doubling the inventory flow ratio of its BCH will at least put supply pressure on the bitcoin cash price.

In early June, the EOS community voted in favor of a proposal to reduce the “inflation rate”, that is, the new annual rate of EOS tokens was reduced from 5% to 1%. Block producer rewards remain unchanged at 0.25%+0.75%, which means that more than 4% of EOS will hit the eosio.saving account is locked (first class note: some system accounts can be controlled on the EOS blockchain ) A variety of corresponding features, these accounts have a prefix of “eosio.”, where the eosio.saving account stores 4% of EOS inflation) . On March 5 this year, the “eosio.saving” account had a balance of more than 28.75 million euros (about $108 million) and was growing every day (first-class position: this means an increase in EOS that was dug up and circulated to the market). Less and less) .

EOS experienced a short-term price increase throughout the time, setting a new annual high. However, according to Coinmarketcap's data, this joy is short-lived, and the price of EOS has been declining since then.

The inflation rate of Monroe has fallen faster than Bitcoin. XMR's overall block award fell below the Bitcoin award for the first time this year, and in August, the daily supply growth was lower than the benchmark for Bitcoin (the first position note: Monroe's third reduction on November 6 this year Half, the block reward dropped to 2.190923256 XMR) .

The inflation rate of Monroe has been 4.1% since 2019 and fell to the expected 2.39% by the beginning of 2020. This made 2020 an important year for XMR, and its inventory flow ratio eventually exceeded Bitcoin. According to Bitwise, Monroe’s annual circulation will fall by 41% next year.

Due to the uncertainty of the maximum total supply, DASH will continue to be mined for 192 years until a single year is required to mine a single Dash. By 2209, only 14 DASHs could be dug up, and it took 231 years to dig out the last DASH.

Despite the complicated algorithm of DASH supply , DASH's supply growth is expected to drop by about 7% every year . In theory, if other conditions remain unchanged, this will bring continuous price increase pressure.

Litecoin halved in 2019 saw the trait of 'purchasing rumors, selling news', and the price rose from $20 at the beginning of the year to $140 in August. However, there has been no rebound after halving, and this rising bullish price activity can be explained by the re-bullish sentiment of Bitcoin.

Since the last half of Bitcoin, the encryption market may have matured significantly, but with the approach of May 2020, it may be a splash. Whether through community consensus or through algorithmic design, these mainstream cryptocurrencies, like bitcoin, will undergo radical changes in supply between 2019 and 2021.

As bitcoin is halved, encryption technology has also become the focus of attention, and the price increase of these digital assets may lag behind. As Bayern LB said, half of the price has not been reflected in the expectations.

Reprint, please keep the copyright information, thank you for reading.