On Thursday, local time, according to the US Department of Justice, the prosecutor from the Southern District of New York announced that Hugh Brian Haney had pleaded guilty. Haney was accused of money laundering in the first half of 2018, "cleaning" nearly 20 million US dollars of drug money.

About eight years ago, Haney was a senior member of the drug trading organization called Pharmville and one of the suppliers of drugs in the organization. In February 2012, Haney received more than 4,000 bitcoins in the Silk Road website account, which was used to purchase the illegal proceeds from Haney's “drugs”.

At the beginning of 2018, when Haney tried to sell the remaining bitcoin in his account on a cryptocurrency exchange for $19,147,053, the exchange was alerted, and the exchange freezed his account for the first time. The source of funds was backtracked. In the end, Haney was arrested in July 2019 for allegedly using Bitcoin for huge money laundering. US Attorney Geoffrey S. Berman confirmed that the bitcoin that Haney plans to sell for more than $19 million is an illegal source of drug sales to global buyers through the Silk Road website.

After being arrested, Haney initially claimed that the bitcoin she planned to sell was mining income, but after tracing through the chain information, it was confirmed that this part of the bitcoin came from the Silk Road website, and three months after the arrest, Haney Finally pleaded guilty to involvement in money laundering and illegal transactions. According to official sources, Haney will be formally sentenced in February next year.

You should also know about the Silk Road.

In November 2011, Ross Ulbricht, who was still a student, established the Silk Road website. According to him, his original intention was to create an economic community that bid farewell to “centralization”, on which only Bitcoin can be used. The process of trading and trading is encrypted throughout, and neither the buyer nor the buyer knows the true identity of the other party.

However, it is precisely because of this "highly anonymous" feature that the site became a hotbed of crime shortly after its establishment. A large number of illegal transactions have become popular on the website, and the “Silk Road” has gradually evolved into a dark world filled with drugs, child pornography and even murderers.

For this reason, Ross Ulbricht was arrested by the police two years after the founding of the site. After the arrest of Ulbricht in October 2013, the Silk Road website was officially closed, and Ulbricht was eventually sentenced to life imprisonment for multiple charges.

According to a member of the Dark Web organization who provided document resources and technical services to black market customers, the dark market trading market represented by the Silk Road is actually a centralized marketing, communication, trading, credit and hosting platform. User loyalty and market share are primarily regulated by the market itself, rather than through a layer of dealers.

However, as the dark-net transactions were partially valued by governments and heavily cautious, the accounts of some moderators and operators were stolen. In addition, for those information security experts, the flat organizational structure makes it easy to sneak into the dark market, and it is easy to identify the identity of a platform operation team or seller team. This has led to the rapid loss of the trust base in the dark market. These have directly led to the rapid decline of the dark net after a brief outbreak.

Although the Silk Road has faded out of the historical stage, its huge wealth has not been left.

At the end of August 2018, a netizen named "sick_silk" posted on reddit that a wallet address associated with the Silk Road had transferred $1 billion worth of digital currency assets in just three days.

These assets were previously split into N wallet addresses with 100 bitcoins, and the original wallet address had over 110,000 bitcoins and a certain number of BCHs. The last transfer before the asset transfer in 2018 needs to be traced back to March 2014.

At the time, the shallots sorted out the split path of the original wallet in the report: 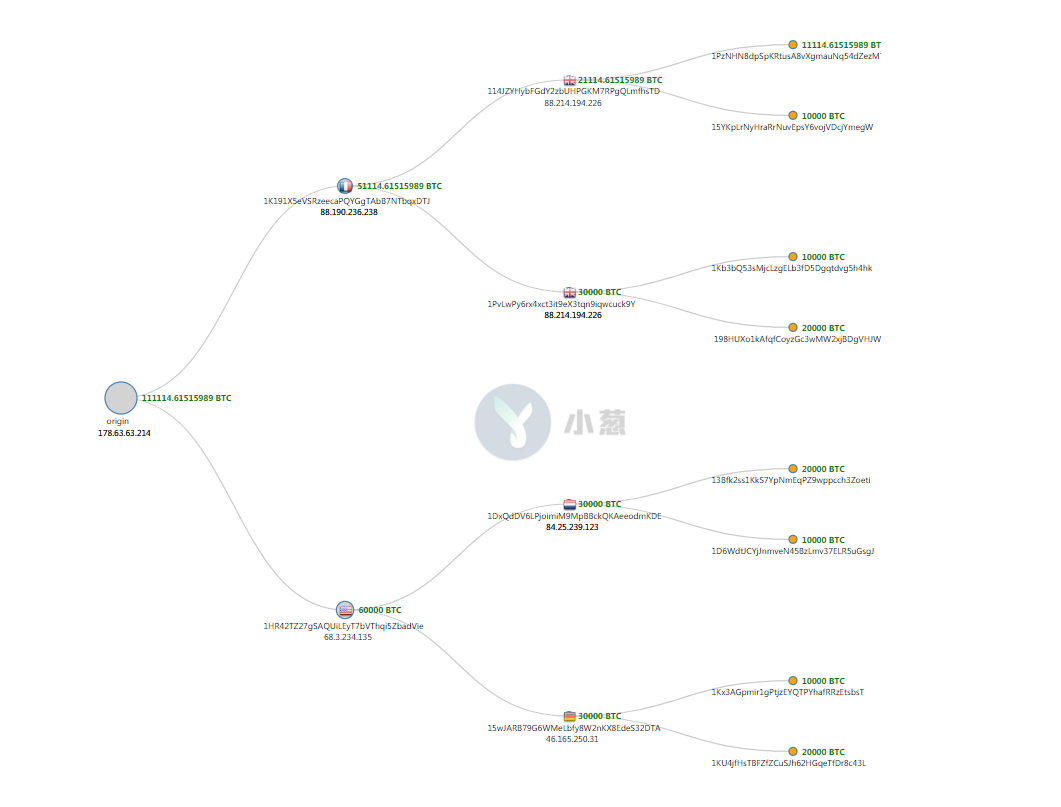 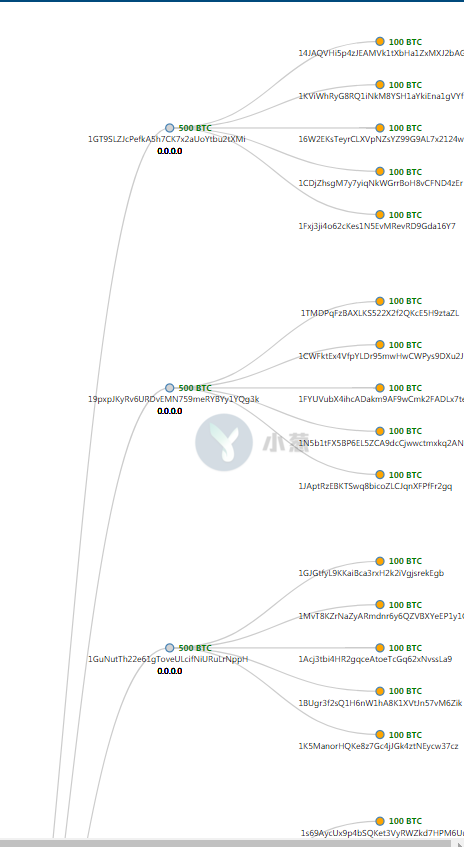 The source of these assets can be traced back to the same address: 1933phfhK3ZgFQNLGSDXvqCn32k2buXY8a, and as early as October 2013, some netizens pointed out that the address is a "Silk Road" wallet address.

After further tracking this huge amount of wealth, a netizen named "sick_silk" pointed out that the owners of these funds are selling these funds or exchanging them with other currencies, which is likely to be used to hide their behavior. Reminiscent of the hundreds of thousands of people who have participated in the willingness to call for the expropriation of Ross Ulbricht, there are voices on the Internet, this huge wealth is likely to still belong to Ross Ulbricht.

So far, these bitcoins have not yet been transferred to cryptocurrency exchanges, indicating that they will not be sold soon. But the large-scale merger operation is often not the ultimate goal, it indicates that the holder will make a big move, or transfer funds to a more secure device.

In the face of such a huge amount of funds, there will inevitably be the emergence of Haney who tried to take risks, as mentioned at the beginning of the text, and this will obviously become a huge hidden danger in the market for a long time.

A "Silk Road" fell, and thousands of "dark nets" stood up.

When the regulator shut down the Silk Road website in 2013 and sentenced its founder, Ross Ulbricht, to life imprisonment, it was argued that such “extreme punishment” would effectively organize imitators. But the trading model proposed on the Silk Road website is driven by the huge demand in the dark corners of the society and the huge benefits that accompany it. Others continue to take risks and let this black industrial chain be closed after the Silk Road is closed. continue.

According to the DarknetLive website, although many websites suspected of providing covert trading services have been shut down in the past few years, dozens of platforms providing illegal trading services are still operating worldwide. At present, the "new generation" of the dark network has been greatly improved compared to the regulatory and post-regulatory resilience. This industry chain may never go to the sun, but it will never be Was completely eliminated.

More and more people are calling for pardoning Ross Ulbricht

Over time, more and more people began to “scream” for the founder of the Silk Road, Ross Ulbricht. Many people on behalf of Ulbricht issued a statement publicly opposed to his sentence for the creation of a website. As of the publication, Ulbricht has spent 2,233 days in prison. The celebrities who called for the pardon of Ulbricht include former US Assistant Secretary of Housing Catherine Austin Fitts, actor Keanu Reeves, "Bit Jesus" Roger Ver, writer Lew Rockwell, Litecoin founder Li Qiwei, billionaire Tim Draper and political critic Tom Woods. Organizations such as Cato Institute and Downsizedc.org have also joined in the willingness to join.

So far, nearly 235,000 people on the website named FreeRoss have signed a petition for Ross Ulbricht's pardon.

Secret history of bitcoin in…

The activity on the bitcoin chain dropped slightly, and the time taken to produce a block increased.