For a time, the policy spring breeze blew the land of China, "What is the blockchain" on the hot search list, and then began the national discussion of "where can the blockchain be used?"

Recently, blockchain browser Brave announced its latest user data, and the eye-catching performance of 8 million months of life has aroused widespread concern in the industry. Is the blockchain application coming to an explosion? In addition to the browser, what are the links that "blockchain +" also links? What are the real performances of the “Pioneer Forces” that explore these blockchains?

1. There are many scenarios where trying to live 8 million monthly is a case

PAData selects the coin of the TOP 100 CoinMarketCap listing value on November 22nd, except the non-technical and pure transaction types other than the public currency, platform currency, and stable currency, and the project tokens with the envisaged application scenarios are the observation objects [ 1]. Finally selected Brave (BAT), BitTorrent (BTT), Centrality (CENNZ), Chiliz (CHZ), Enjin Coin (ENJ), HedgeTrade (HEDGE), Augur (REP), Status (SNT), Solve.Care (SOLVE) These 9 items. However, it must be affirmed that this observation is not fully observed, but it is still possible to take a peek at the attempt of “blockchain+” from these cases.

According to the official website of each project, among the nine projects in the scope of observation, Brave is a browser, BitTorrent is an information transmission project that provides seed downloads; Centrality and Status are tool-based projects, the former is a development toolkit for developers, and later Is a push tool and content management tool for Ethereum DApp applications; Chiliz is a blockchain for the sports industry that allows teams to issue tokens such as Atletico Madrid, Rome, Juventus, etc.; Enjin Coin is an application. Blockchain for the gaming industry; tokens can be used in the gaming community; HedgeTrade is a social software that analysts can share on the platform; Augur is a predictive application that predicts to be considered a pan-DeFi; Solve.Care is a blockchain for the health sector with the goal of improving the delivery and management of healthcare. 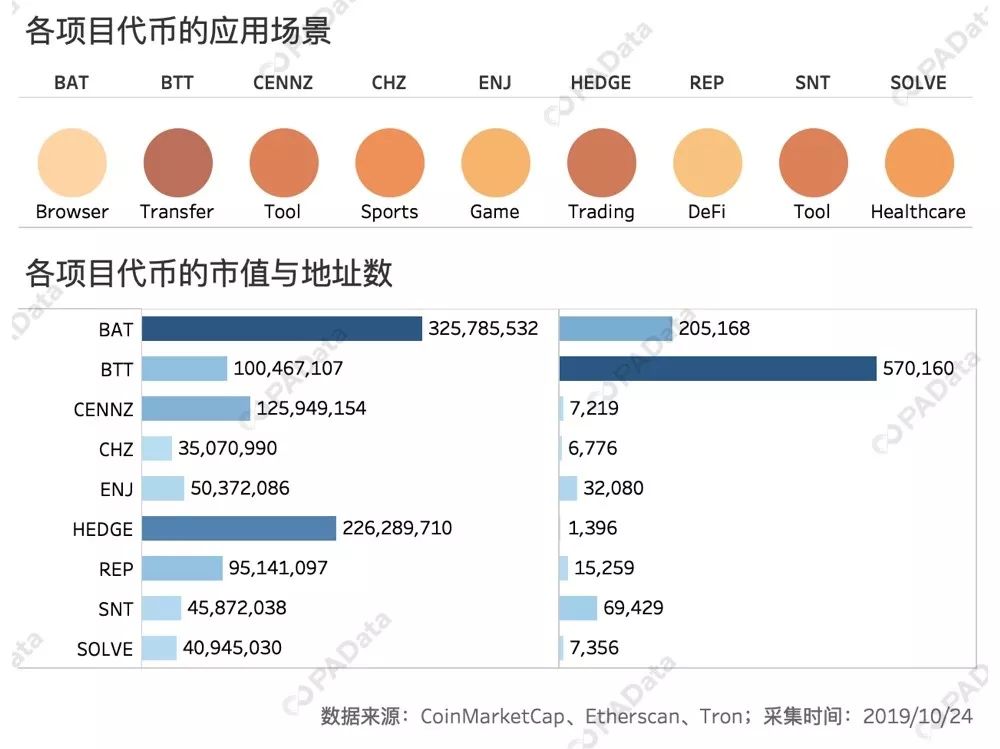 From the perspective of user activity, according to the latest user data published by Brave's official blog, the daily life of the browser has reached 2.8 million, and the monthly activity has reached 8 million. The market value of its native token BAT has reached about 326 million US dollars. According to the statistics of PAData "TOP 30 Series of cryptocurrency" in March, BAT has already entered TOP 30 when the market just warmed down at the end of March this year. From the point of view of the number of token-holding addresses, BAT has also reached about 205,200, which confirms that BAT users are really active.

But are other "blockchain+" attempts also such good user performance?

When PAData counts user data of other projects, it is found that most projects do not publish specific data, which may mean that the user activity of these projects has not reached a certain level. In addition, the third-party platform DApp Total contains the user data of Augur, which is calculated according to the highest daily activity of 265 in history. The highest monthly activity is only 7950, less than 10,000.

It can be seen that Brave's high monthly activity is only a case, and may not be related to Brave for "blockchain +" and "blockchain +". The Orange Book has pointed out that Brave's user experience is better. The first is the browser, which can satisfy the user's appeal of migrating data, shielding advertisements and protecting privacy. Secondly, it is the token model of BAT advertising economy. Other "blockchain+" attempts have not been prominent in terms of data migration and user experience, which has made it difficult to pull new projects.

2. The transaction is still the main use token lacking value capture mechanism

PAData counts the user address of the TOP 100 balance in the blockchain browser and finds that the chip concentration of different item tokens varies greatly. In theory, the more addresses that hold tokens, the more dispersed the total amount of tokens held by each address, which means that the more independent users, the better the user activity.

Statistics show that SOLVE, CHZ, CENNZ and HEDGE have a high degree of token concentration, of which SOLVE has reached 66.32% and CHZ has reached nearly 60%, which means that the tokens of these two projects are monopolized by a single address. BTT with better token dispersion, the most "rich" address only accounts for 8.12%, and the TOP 100 address has about 30% of the total circulation. However, the high dispersion of BTT tokens may be related to its good secondary market liquidity. There is no reliable data source to disclose the number of specific users using BTT for information transmission.

In general, these “blockchain+” tokens have a relatively high degree of monopoly . There are 5 items of tokens, and the total amount of TOP 100 accounts for more than 90% of the total circulation. After further observing the address tag, PAData found that for the “ blockchain +” case of these already issued tokens, the main use of most project tokens is still transactions. Of the nine observations, the total weight of the tokens on the seven exchanges of the seven projects exceeded 15%, and nearly 30% of the highest ENJ tokens were circulated on the exchange. Only the two tokens, CENNZ and SOLVE, accounted for 0.2% and 6.27% of the total liquidity on the exchange. Most of these project tokens are not very mainstream tokens. From the perspective of their main circulation exchanges, Binance has a large advantage in the circulation of small currencies. There are 4 projects in 9 projects. The coins are mainly distributed in Binance. Moreover , the currency prices of these project tokens on the exchanges fluctuated greatly, and the average single-day maximum amplitude reached 12.15%.

According to the statistics of PAData "TOP 30 Series of cryptocurrency" in September, the highest single-day amplitude of the cryptocurrency of the market value of TOP 30 is only about 5% in August, the highest volatility of VSYS is only 8.31%, and the lowest volatility is only 3.72%. (except for stable currency). Therefore, the one-day fluctuation of the nine “blockchain+” items in the observation range is much higher than that of the mainstream currency. 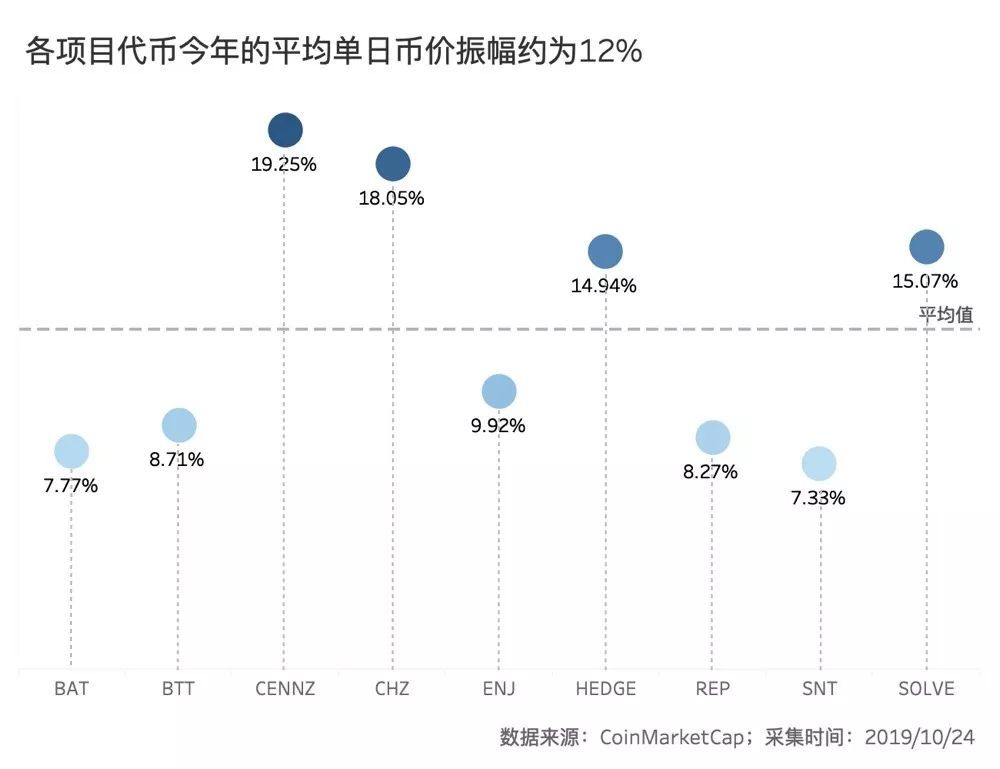 If the current cryptocurrency generally lacks a value capture mechanism, or a value-supporting system, then the “blockchain+” project tokens that have tried to eat crabs in other fields are undoubtedly lacking in this regard. However, these tokens are directly related to the actual business. If the users cannot be given stable value, then these tokens will lose the basic functions of the currency, and it will be difficult to reform the business model of each industry through the “blockchain+” approach. Finally, the “blockchain+” of these traditional industries will be the same as “Internet+”, only staying on the physical connection.

[1] PAData screened 13 tokens according to this standard, but only 9 were retained after considering the availability of data on the token chain and transaction data in the secondary market. 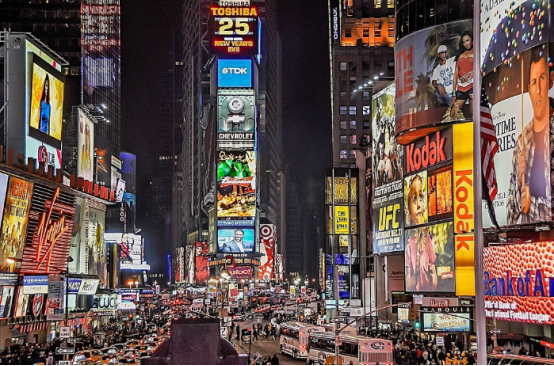