The theme of “Using. Unbounded” at the Wuzhen Conference was great. As the largest blockchain exchange event after the domestic policy was favorable, the big coffee was gathered and the popularity was full.

What are the most valuable information that can be extracted from many wonderful sharing and reports from Wuzhen?

Many members of the PPk technology community also went to the Wuzhen blockchain universe center, focusing on some on-the-spot topic sharing, participating in the special session and community tea party, guest dinners and various social activities in the industry. After the meeting, they concluded that they passed This Wuzhen event will be able to see the maximum value of blockchain technology, and build a new type of autonomous identity and promote the upgrading of the Internet format.

Here are a few representative Urumqi live themes to share, for a brief review for discussion: 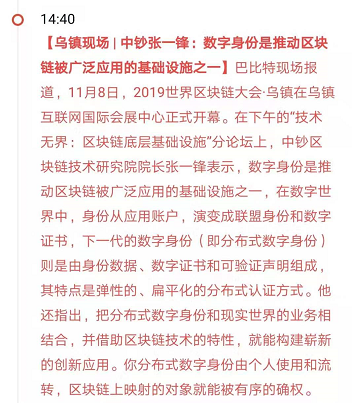 Web 3.0 is an old word, before Bitcoin came out. Web3.0 is a relatively well-informed statement. It is based on the accepted version of Web1.0 and Web2.0, and it is a general reference to the next-generation WEB format, but it is directly explained without explanation. Not the same as saying. The round table shared a multi-angle interpretation of Web3.0 for reference. The PPk technology community is also based on the control of the World Wide Web into the giant siege control model. The key word for Web 3.0 we understand is Peer peer-to-peer. It is more accurate to call the PeerWeb peer-to-peer web. Under PeerWeb, the control role of the website platform will be further weakened, and the difference between the client and the server will be blurred. Each content browsing node is also a content service node. This is also the development direction of the PPk open agreement, and will be shared in more detail in the following.

The MOV protocol is a big move for digital asset business applications after the original team built the "1 main multi-side" architecture, and is a very meaningful innovation of the public chain platform.

The "distributed blockchain business ecosystem" introduced by the CEO of the original chain can be understood to some extent as a specific case of PeerWeb/Web3.0 in the field of enterprise digital assets.

Distributed digital identities are not only for individuals, but also for corporate organizations. Enterprises can independently register the chain logos such as Odin, flexibly choose related business certifications, and provide a credible basis for the digitization and distribution and distribution of their assets, and in the specific chain and circulation options, like The multi-layer cross-chain flexible architecture of the "1 main + multi-sided + MOV protocol" is very suitable. The Oracle oracle design ( https://www.chainnode.com/post/391633 ) has been added to the MOV protocol, and a stable currency ( https://www.8btc.com/article/512471 ) similar to the renminbi has been introduced. Defi scenes such as asset-related offline, decentralized transaction pricing, mortgage lending, etc. also provide a lot of imagination, which deserves attention. Recently, online exchanges (https://www.chainnode.com/post/388237) have been held in the “Linked MOV White Paper”, and interested friends can pay attention to and study.

The most important point in the content shared by Yuandao teacher is "6G-1". 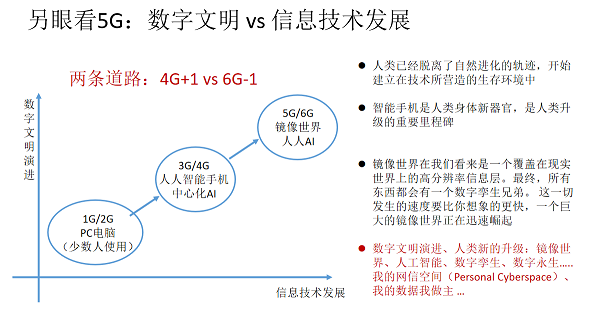 This picture in the report expresses three meanings: "First, 5G of 6G-1, the user terminal is no longer a smart phone, but a mirrored world; second, the computing structure is no longer the "cloud+" of today's mobile Internet. "tube + end", but "fog + chain + screen"; third, and most importantly, 6G-1 is facing the next generation of people, new and new human beings who are constantly evolving with scientific and technological progress. In the new information network space ( Cyberspace 3.0) build your own digital presence, build your own digital twins, and ultimately build your own digital eternal life.". It is envisaged that 5G will upgrade the user terminal to the mirror world of the real world. For the existence of its own digitization, it will naturally bring the premise of autonomous digital identity.

5G was mentioned many times in this conference. It happened to be a friend of the communication industry background during the lunch time of the conference, and also discussed the value of 5G. The focus of 5G is to improve the access performance of the terminal by an order of magnitude. Not only is the transmission bandwidth faster, but also the number of concurrent access devices has been greatly improved, and the computing power of the terminals such as mobile phones has increased and the cost has decreased. After combining the various factors, the traditional mobile terminal can be upgraded to have the Server capability and become the peer Node, which has a basis for further building a peer-to-peer trusted value Internet.

When each person's mobile phone can become a server that publishes its own content, it can be independent of the control of the traditional platform, and can independently confirm the rights and benefit the content value. The independent digital identity demand will become more and more obvious.

There are also a lot of valuable sharing content, please refer to the special report of Babbitt Wuzhen ( https://www.8btc.com/special/508685 ).

The current Internet deviates from the initial "distributed, out of control, self-organizing" goals, and is on the path of "concentration, control, and organization" led by capital interests. In 2009, Bitcoin was born, and its underlying Blockchain technology subtly blended previous technologies such as P2P, digital cash, and asymmetric encryption. It was the first in history to achieve "organizational form." The innovative nature of centralization and business logic that maintains perfect consistency and centralization is called “revolution”. Our PPk technology community believes that this original feature of the blockchain will greatly influence the development of network technology and help the Internet industry to change again.

Last year, Wuzhen Blockchain Conference invited many heavyweight guests, and there were many visitors and projects on site. At that time, members of the PPk community also exchanged ideas on various project booths. Each of these projects had its own characteristics, but it was a bit familiar with the taste. I felt that most blockchain projects still stayed in the blockchain LAN mentality, although the district was used. Blockchain technology, but the core business logic still does not get rid of the traditional Internet's siege control mode. Simply put, the information flow lacks the openness of cross-chain and cross-system. Once the user chooses, it is difficult to freely switch to another home. The blockchain is just a piece of leather. A stamp is the original shape, mainly for the Coin to send the Token and the blockchain. In fact, it can be done with traditional IT technology, even more mature and better.

With the recovery of the market this year, the CrossChain project represented by Cosmos and Polkadot has become a new hotspot. The Oracle technology for solving the gap between the chain and the world outside the chain has also developed rapidly. There are many ChainLink, Band, etc. A variety of technical solutions, these indicate that more friends in the industry have seen that they are exerting and promoting in different areas of focus, and strive to evolve the originally isolated "blockchain island" into a "blockchain network." At this year's Wuzhen Conference, keywords like "cross-chain interoperability and multi-layer cooperation" have also been highlighted many times.

Compared with the initial simplistic bitcoin, the current blockchain technology has been greatly enriched, with a multi-modal public chain carrying "Coin/coin" or "Token/token or pass", and a coin-free alliance chain. . Between different coin chains, it is not a "dark forest" that "you die". It can be based on autonomously credible, open and universal chain-on-label protocol, defining standard protocols such as equivalent and feasible transmission and application to "break the boundary" and " "Connected", each can be combined and applied, bitcoin is "root", the public chain is "branch", the alliance chain is "flowers and fruit", combined with the development of more emerging technology fields, to build a new "multi-layer cooperation" Value Internet" ecology.

The blockchain technology blockchain technology brought by Bitcoin is just one kind of information technology. It is not perfect like TCP/IP technology. It has a scene suitable for solving it, not a panacea. The current bitcoin blockchain has become the core infrastructure for the next generation of Internet NET 3.0, which is driven by consensus. However, it also needs cutting-edge emerging information technologies in more fields such as network communication, and the integration of a future Internet. Architecture to better support specific application scenarios.

The traditional "IP waist" of the IP network architecture is in the IP packet part, and the Named Data Network (NDN), one of the US government's next-generation Internet Research Programs (FIAs), changed the "bee waist" to Content chunks. To shift focus to the data content itself, IP becomes one of the optional underlying transport transport protocols rather than the only one. By recording and identifying the identification characteristics of the data block, the routing node of the NDN caches the data blocks for subsequent multiplexing. In the NDN network environment, the data requester does not care about the actual location of the data. As long as a valid data block identifier is provided, the network will automatically find the most recently available cache node or the original node to obtain the data block and return it to the requester. From this we will think that both the network routing node and the requester need to be able to verify the authenticity of the data block, which is precisely the advantage of the blockchain technology. Based on the blockchain technology, the naming identification solution is provided to the NDN technology system, which is also the direction that our PPk technology community is further promoting development. At present, whether it is a traditional business model such as BAT, or a "pseudo-P2P" mode such as the hot UBER, AirBNB, and Didi, there is essentially a "P" with superior control as the core existence (below) The model is shown on the left).

Our PPk technology community envisages that the network will continue to evolve and evolve under the impetus of emerging technologies such as Blockchain and NDN, and will be upgraded from a simple message channel to a neutral information platform to achieve “network as data, network as platform”. In the future, whether it is the individual who obtains the information service, or the individual who provides the information service, sp, can be connected autonomously and peer-to-peer in the “N”, the network, the only “big platform” environment. Each access individual is a member of N, and N is a neutral role that is equal for all access individuals. The “pNp” model on the right side of the above figure can better adapt to the development trend of the Internet of Things, smart devices, big data, etc., and the “pPp” business model that relies on the traditional “control centerization platform” for survival will be foreseeable. The impact. Taking big data as an example, the value of data is not "big" but "liquidity". "Network is data" will completely change the siege of data, and greatly satisfy the liquidity demand of data.

Last year's Baxter Wuzhen blockchain conference let everyone "see the future" when the market went down. This year's Wuzhen event will take advantage of the favorable Dongfeng, breaking the "bounded" thinking and pointing out the application of the blockchain. A clear solution: using the logo on the chain as a breakthrough, leveraging the peer-to-peer credibility of blockchain technology, and integrating emerging technologies in many fields, such as network communication, to promote the next-generation peer-to-peer WebPeerWeb with multi-layer cooperation!

DApp trading volume fell by nearly 40% in the third quarter

Messari product owner: By the end of this economic crisis, Bitcoin's dominance will rise to more than 90%

Is the development of Ethereum opening a new direction? Hyperledger announces the acceptance of the first public Ethereum blockchain project Pantheon