The so-called Ethereum killer never appeared. The ERC-20 token is close to the capitalization of Ethereum, and the network has also flourished. Other smart contract platforms are not even comparable to Ethereum in terms of related activities.

Coin Metrics used an analysis developed by Chris Burniske of Placeholder, a New York venture capital partnership, to measure the health of the Ethereum network. This indicator compares the market value of ETH with the market value of all tokens issued on the network. This ratio of network value to token value assesses the health of the Ethereum token ecosystem.

The data value indicates that the market value of ETH is equal to the total market value of the token it holds. This means a healthy, potentially underestimated smart contract platform. Coin Metrics found that since the second quarter of 2017, this percentage has dropped from slightly below 35 to 1.9. 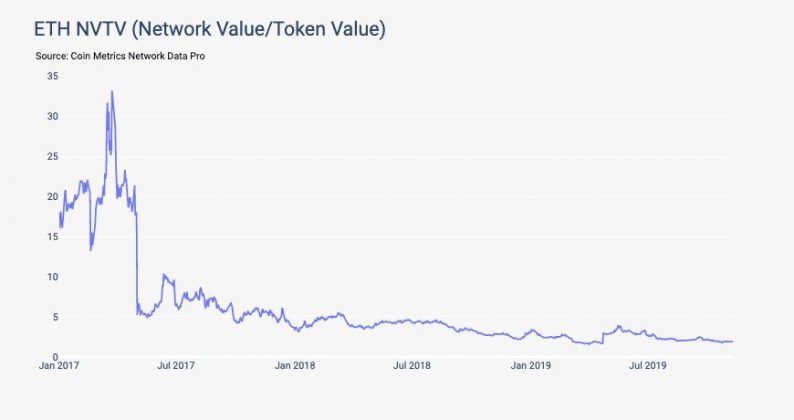 What caused the decline?

ERC-20 tokens bloom throughout the 2017 ICO frenzy. Most of them are practical tokens, and their initial prices have exploded before the price fell quickly – but ETH has followed a similar trajectory. Ico generally accepts ETH or BTC as a return on its token, which puts demand pressure on the platform's local tokens.

ETH has experienced the cold of the entire market experience – perhaps because the ICO project sold ETH to Fait to fund its activities.

According to Coin Metrics, the increase in the value of non-local tokens has been contributed primarily by stable currencies since mid-2018. In the past year and a half, their total capital has increased from $109 million to more than $2.8 billion, accounting for 1% to 28% of the entire ecosystem of ERC-20.

In contrast, utility tokens have decreased by nearly $2 billion, from 70% of the ERC-20 market value to less than 50%. Exchange tokens remain fairly stable, accounting for about a quarter of the value of ERC-20 tokens.

At the same time, ETH's performance is not so good.

The health of tokens carried by Ethereum is improving, and it can only explain half of the problem. Since the middle of 2018, steady growth and declining ETH prices have reduced the relative value ratio. On July 1, 2018, ETH's total capital was slightly less than $50 billion. It is now about $20 billion. The ERC-20 market is basically stable. Its composition changes as the relative importance of the stable currency increases, but its total value of about $10 billion has only increased a little during this time.

According to Coinmarketcap, Tether is still the dominant stable currency with a market capitalization of more than $4 billion. This is 10 times the market value of the second largest ERC-20 stable currency USDC.

Tether can drive a lower ratio of network values ​​to token values. Tether is built on top of some protocols. The most important are Omni and Ethereum. As Coin Metrics pointed out, “In the past few months, usage has moved from an omni-based version to an ether-based version. If this trend continues, Tether will play a role in the total value of the tokens carried by the Ethereum platform. The more important the role.

How are the Ethereine killers? He found the activities on the Ethereum, WAVES and NEO platforms to be very healthy, with a ratio below 10. On the other hand, the proportion of EOS is over 200, far higher than Ethereum. Burniske said at least one asset is priced lower than its token-managed tool. It means:

On the basis of >200 times EOS and 2 times ETH, #Ethereum seems to be seriously underestimated.

It believes that although the Ethereum network has its own ups and downs, it is still a healthy platform for token activity. It is wise for crypto investors to be vigilant about this indicator. At the current price, ETH may be seriously underestimated.

Analyst: Even if the currency is launched by Binance US, US users may face four major problems.

The securities pass service platform XChain and Yi Tongheng will cooperate to promote the integration of blockchain pass-through economy and industry.