Starting in 2014, starting from Bulgaria, under the leadership of the "Encryption Queen" Ruja Ignatova, onecoin swept the world.

Vicat coins have gradually faded out of the country's vision.

On November 5th, the original Vicat lawyer, Mark Scott, was tried by the New York courts, and the BBC also launched a Vika-themed program, The Lost Encryption Queen. More truth about the Vicat was disclosed.

However, although the founder has disappeared for two years, Vicat was hit by police around the world, and the main criminals were arrested one after another. However, the deep chain Deepchain found that in China, the “believers” of Vicat coins still exist.

"The main criminals of Vikco have been arrested."

In the official introduction, Vikco is the second generation of virtual currency, which can be freely circulated and value-added quickly, allowing investors to “get rich overnight”.

Vikco is a membership system, and to become a member of the “Vicat Coin” organization, it is necessary to pay an activation code of “Threshold Fee” ranging from 130 Euros to 36,330 Euros, recommended by the old members.

In addition, Vicat coins are divided into static mode and dynamic mode. The static mode is that after the members pay different levels of membership fees, they can obtain the corresponding Vicat coins in a certain period. Dynamic mode is to obtain different proportions of returns by developing offline members.

Member grading, dynamic and static profit model, no matter which direction you look at, Vicat coins are inseparable from the word marketing.

In fact, since 2016, many governments including China, India, Belgium, and the United Kingdom have defined Vicat as a pyramid scheme.

According to Bitcoin.com, on February 17, 2019, Florida lawyer Mark Scott was arrested on suspicion of involvement in the Vicat Ponzi scheme.

However, Mark Scott is not the first high-level staff to be caught in the Vicat project.

In March 2019, Konstantin Ignatov, one of the founders of Vikco, was arrested at Los Angeles International Airport and subsequently detained at the Metropolitan Correctional Centre in New York.

Konstantin is the brother and personal assistant of Vijaco founder Ruja Ignatova.

In the previous 2018, Sebastian Greenwood, another key player of Vicat, was also arrested in Thailand and then extradited to the United States.

Up to now, except for the founder of Vijaco, Ruja has not been brought to justice, most of the core players of Vikco have been arrested by police in various countries.

On November 10, according to CoinTelegraph, Mark Scott’s court hearing found that the size of the Vicat coin scam was much larger than previously expected, and the US government underestimated the amount of the Vikco scam.

In addition, Jamie Bartlett, head of the BBC's "Disappearing Encryption Queen" program, also said that the amount of Vikaco should be three to four times the amount previously estimated, about 36 billion yuan.

It can be said that the crime of Vikco is "shocking".

However, it is such a cryptocurrency MLM project that affects the whole world. The initiator is a woman with a glamorous appearance and resume.

“Hey, are you willing to join our business plan?”

On May 10, 2017, Ruja Ignatova, the "culprit" of Vikco, left this sentence on Twitter and disappeared into public view. 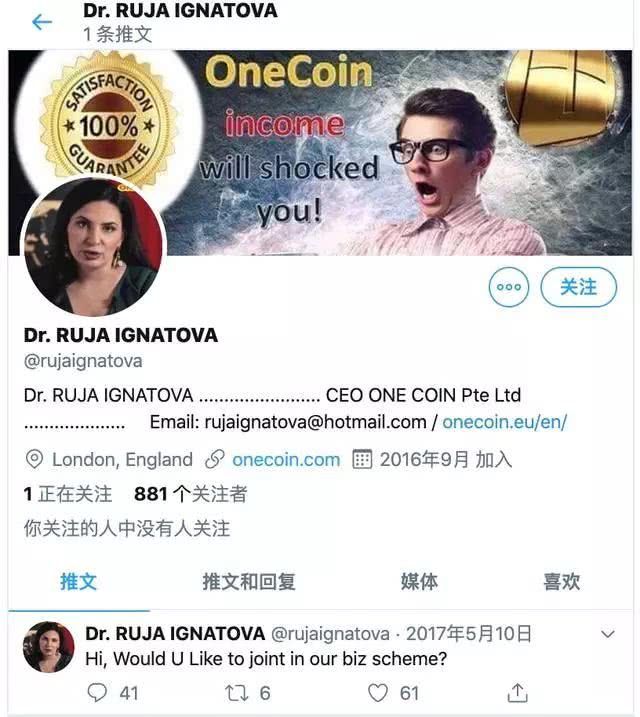 The time goes back three years, when Ruja just created Vikco in Bulgaria.

Every exquisite scam will have a "strong" leader, and Vicat is no exception.

With these titles, Ruja travels around the world to preach.

Every time Ruja is dressed, she wears gorgeous costumes, jewellery and bright lipsticks, just like the Queen of England. So that their fanatical followers gave her a resounding name: the encryption queen.

"Our slogan is to give everyone a high return, and improving the lives of everyone in the world is the vision of Vikco."

In the preaching, Ruja claimed that Vicat is a cryptocurrency, limited in number, unique, not inflationary, and impossible to forge.

But in fact, Vicat is not a real cryptocurrency, its code, circulation and transaction records are not open to the public.

However, despite this, Ruja's highly provocative preaching, coupled with the high return on promises and the expansion of MLM's heads, quickly swept across the globe.

Every time Ruja arrives, there will be thousands of fans following.

In the eyes of supporters, Ruji is the embodiment of wisdom and beauty.

Not only that, but Ruja and her avid followers also designed Vikco's support gesture: the index finger and thumb buckled into an "O" shape.

As long as you support Vicat, it is "family."

Ruja earned a lot of money with the trust and support of the "family". According to the BBC, in the first year of 2016, Ruja raised 4 billion yuan.

However, for the supporters of Vikco, the dream of “getting rich overnight” is quickly broken.

In 2017, the global cryptocurrency industry is in full swing, and Vicat has also hosted a grand carnival in Portugal. But to everyone's surprise, Ruja, the founder, was not present.

Ruja himself could not be reached by phone, mail, social networking site, and Ruja was not found in the Bulgarian capital Sofia.

Ruja disappeared, and even her luxury yacht in Bulgaria didn't have time to take it away. 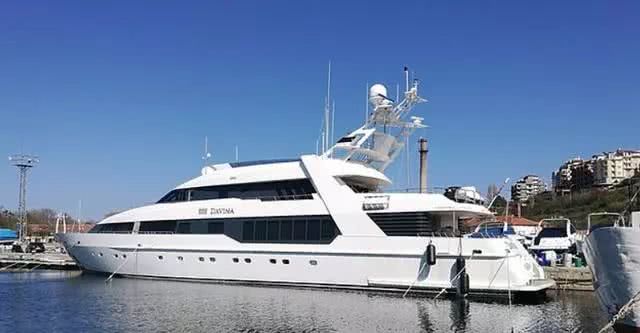 At this time, some followers of Ruja realized that they might have been cheated.

In the first year of the “MLM market” of Vikco, China, which was far more than 6,000 kilometers away, was affected and became the hardest hit in the future.

In 2014, Vicat entered China in the name of “investment”.

It is reported that the team of Vicat Coin in China has set up different membership levels, generally with 5 levels of membership, entry level, advanced class, professional level, senior management level and tycoon level.

The Vikco China team promised that Vicat will only go up and down, and the increase will be "significant."

In addition, as long as the Vicat member introduces the new user to purchase the Vicat coin, 60% of the amount spent by the new user will be distributed to the old user as a bonus.

Faced with such "tempting" returns, more and more people are falling into the trap.

According to media statistics, Vikco has more than 3 million members worldwide, including more than 2 million Chinese members, accounting for two-thirds.

The number of members is so large that the Zhuzhou police found in the statistics that from the highest level of the organization Lumou to Ni Moumou (Hong Kong people, at large) and then to the Zhuzhou City police arrested the suspect Wang, the hierarchy between the three Up to 79 stories.

In foreign countries, the membership level of Vicat has reached an incredible 67,000 floors.

Since 2016, more than a dozen countries including the United Kingdom, Germany, and Belgium have issued warnings or crackdowns on the Vicat currency project. Like other countries in the world, the Chinese police have spared no effort in cracking down on Vikco's pyramid schemes.

From May to December 2016, China’s Zhuzhou police smashed more than 20 provinces and cities and arrested 55 suspects of Vikco coins.

In December of the same year, the Intermediate People's Court of Zhuzhou City made a second-instance judgment on 35 MLM backbones in the case. Duan and Li were sentenced to four years in prison, and the remaining 33 defendants were sentenced to fixed-term imprisonment of four years or less and 10,000 yuan. The fines ranging from RMB to 5 million were confiscated in accordance with the law of 1.368 billion yuan.

Although the Chinese police have made a series of achievements in cracking down on the crimes of Vicatco pyramid schemes.

But there are still people who choose to believe in Vikco, and believe in this illusory dream of riches.

Although Vicat has been severely hit by the police, Li Hua is still full of "faith", and even bluntly the outside comments are stigmatization of Vicat.

Li Hua said that he went online and he said that Vicat will go to the exchange next year and it will be extracted at that time.

"According to the current market price of 190 yuan, then I can get more than 60 times the income of 200,000 yuan." Li Hua has been thinking about his 12 million that has not yet reached. 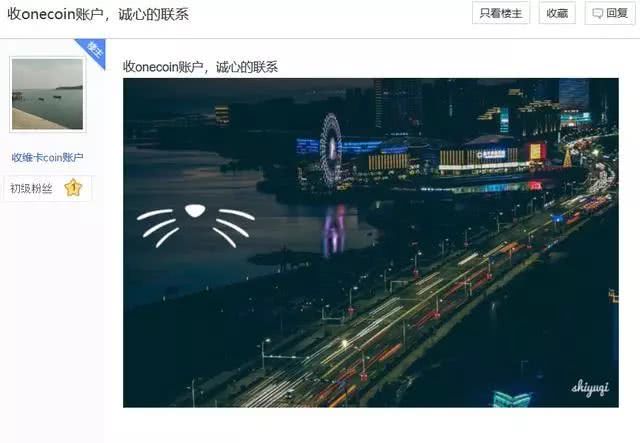 In the comments, there are not a few respondents. 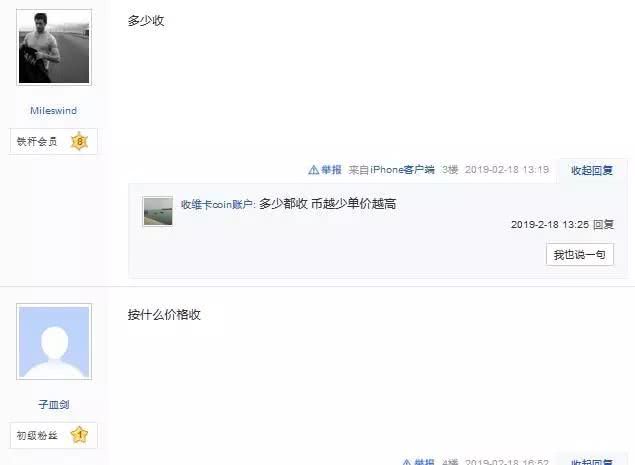 In addition, on the website of the technical community CSDN, there are also some users who constantly send articles to promote the "authenticity" of the Vicat coin.

But in the paper, how to boast that Vicat coins only rise and fall, high returns, some people in the comment area will say: "Can't mention it, what is the use of 1000 times?"

"Now, it is impossible to get it out," Li Hua told DeepChain, "but can do over-the-counter trading."

Having said that, Li Hua showed a video to the deep chain DeepChain. 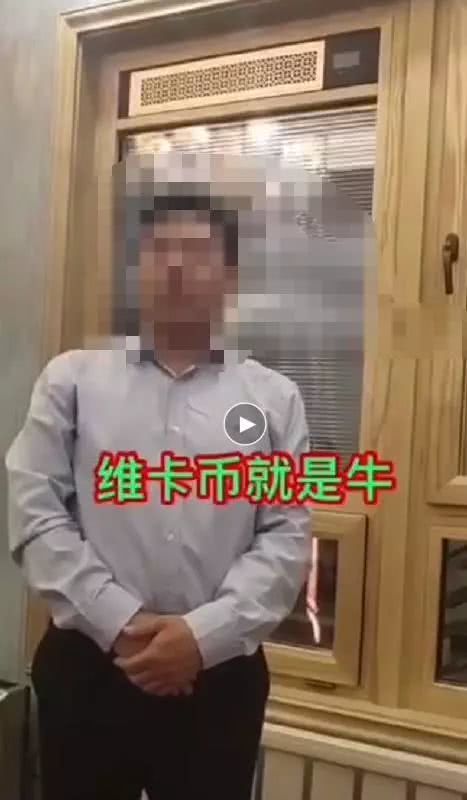 In this video, a furniture industry company from Tianjin announced a product fair in Shanxi, and said that it would take out 50 million yuan worth of products to exchange Vicat coins on the spot.

In order to verify the authenticity of the information, DeepChain communicated with the company by telephone, and the other party said that they did not know.

"Buy the Vicat coin. If you don't have confidence, go to the trade fair and use the Vikco coin to change the real thing."

Li Hua told the deep chain DeepChain that this kind of trade fair has been held several times.

However, for this kind of trade fair, some netizens have questioned: this series of trade fairs will eventually be a farce. 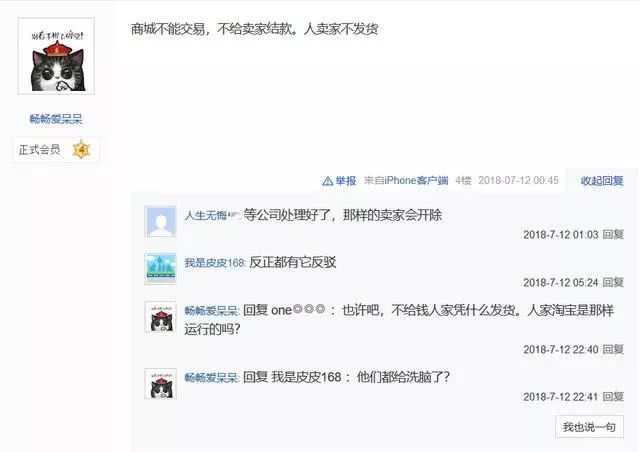 According to a person familiar with the matter, many Vika currency merchandise exchange fairs, hundreds of thousands of tickets, and only accept legal currency.

"This is obviously another criminal that the criminals use the psychology of Vikco users." The insider revealed.

In fact, the believers who hold the Vicat coins are somewhat aware of the truth about Vikco. At the end of his conversation with Li Hua, he suddenly said to the deep chain DeepChain that he does not expect the Vicat to rise more than 60 times, can double, or keep the original price.

"Just as long as you can shoot." 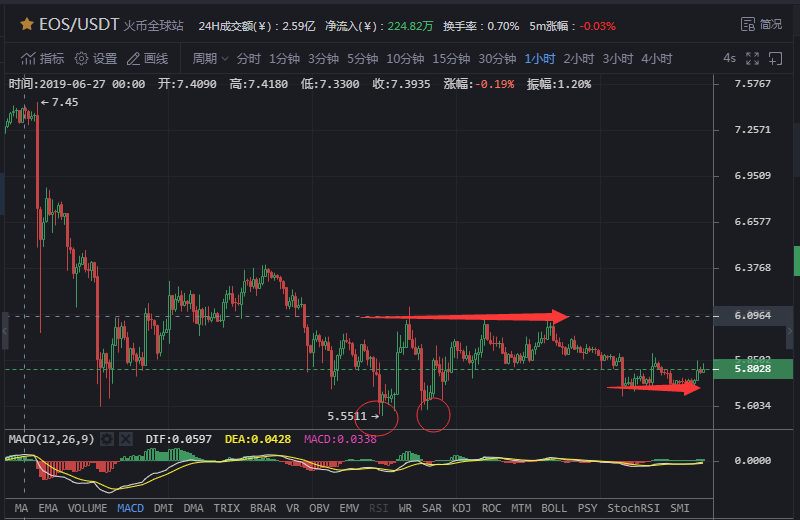