The recent BNB is actually the most dazzling star in the currency market. It has already hit a record high. It is currently oscillating nearby, but we have seen that the two big guards HT and OKB have not followed their recent highs, and the historical highs are even more Don't expect it, BTC is also oscillating in the interval, there is no sign of choosing direction, and the fund wait-and-see mood is strong. BNB's crazy rise is a bit like the fund's behavior in the bear market. It has little to do with the model currency. At present, the other main players in the platform and mainstream currencies are still waiting to see the next trend of BNB. At present, it can only be regarded as a new high. It can't be counted as an effective breakthrough. If BNB can continue to pull up to determine the breakthrough trend, then other currencies will keep up with the rhythm.

In the 1-hour K-line chart, we can see that the BTC quickly retraced to the lower rail of the track line at 5 o'clock in the morning. The volume was not very large, and it was quickly pulled up again. In the K-line chart, we can see that several large Yinxian lines on the left side have been recovered. The market has not had much pressure, and some are only psychological pressure. If the volume of the target breaks through the upper rail, it can actively do more. Effectively break the lower track and may return to the $5,000 integer mark. 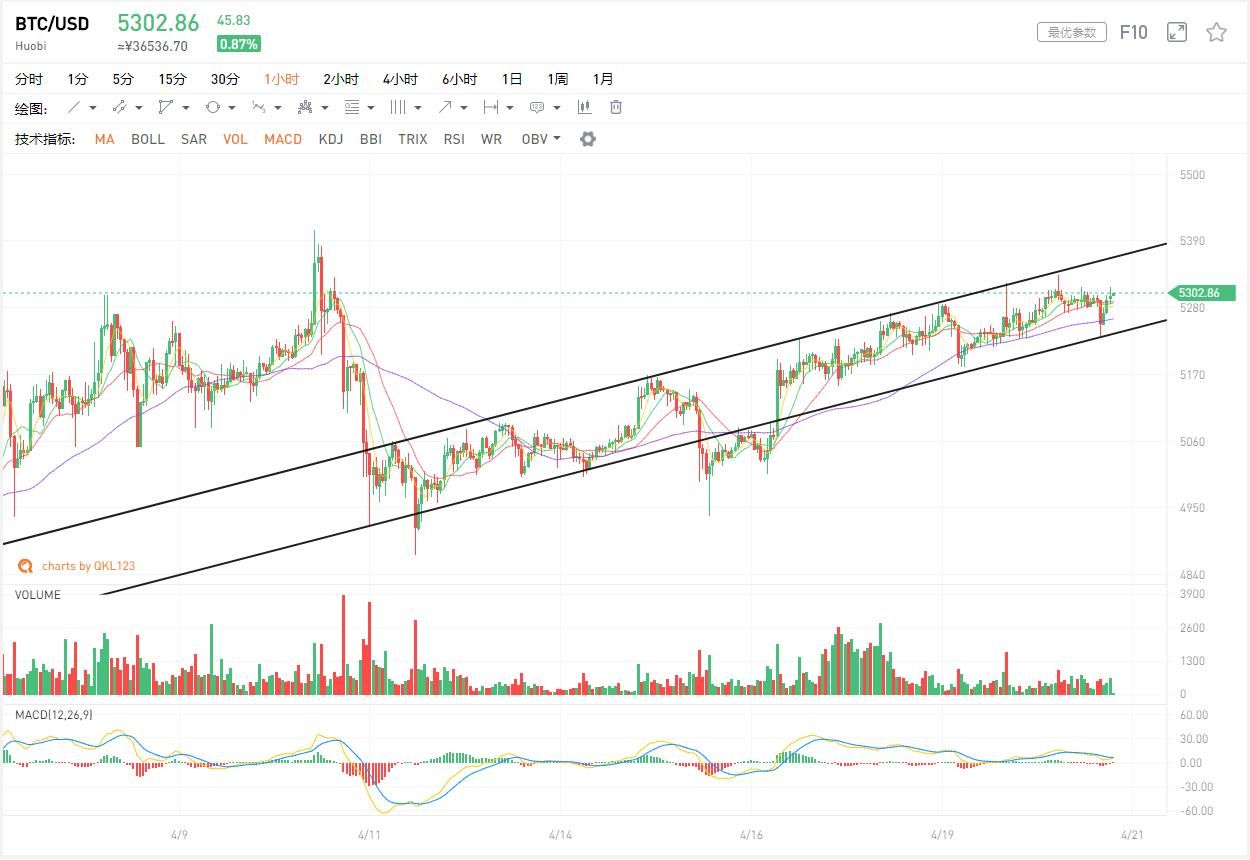 ETH has already stood on all short-term and medium-term moving averages. The current moving average has not yet chosen the divergence direction. The macd indicator has not been glued yet, and the 5-day average line and the 10-average line continue to run downward. From the daily level, the trend of the target is OK, mainly following the trend of BTC, without its own independent trend. As can be seen from the time-sharing chart, the trend is a bit like a small-scale head and shoulders, head and shoulders. The top neckline is around $175. If the volume is above this level, the market is bullish. Pay attention to the pressure of $185.6. The medium-term target is still around $230. If the defensive falls below 165 again, the market will weaken. Bearish. In the range of $ 143-150. 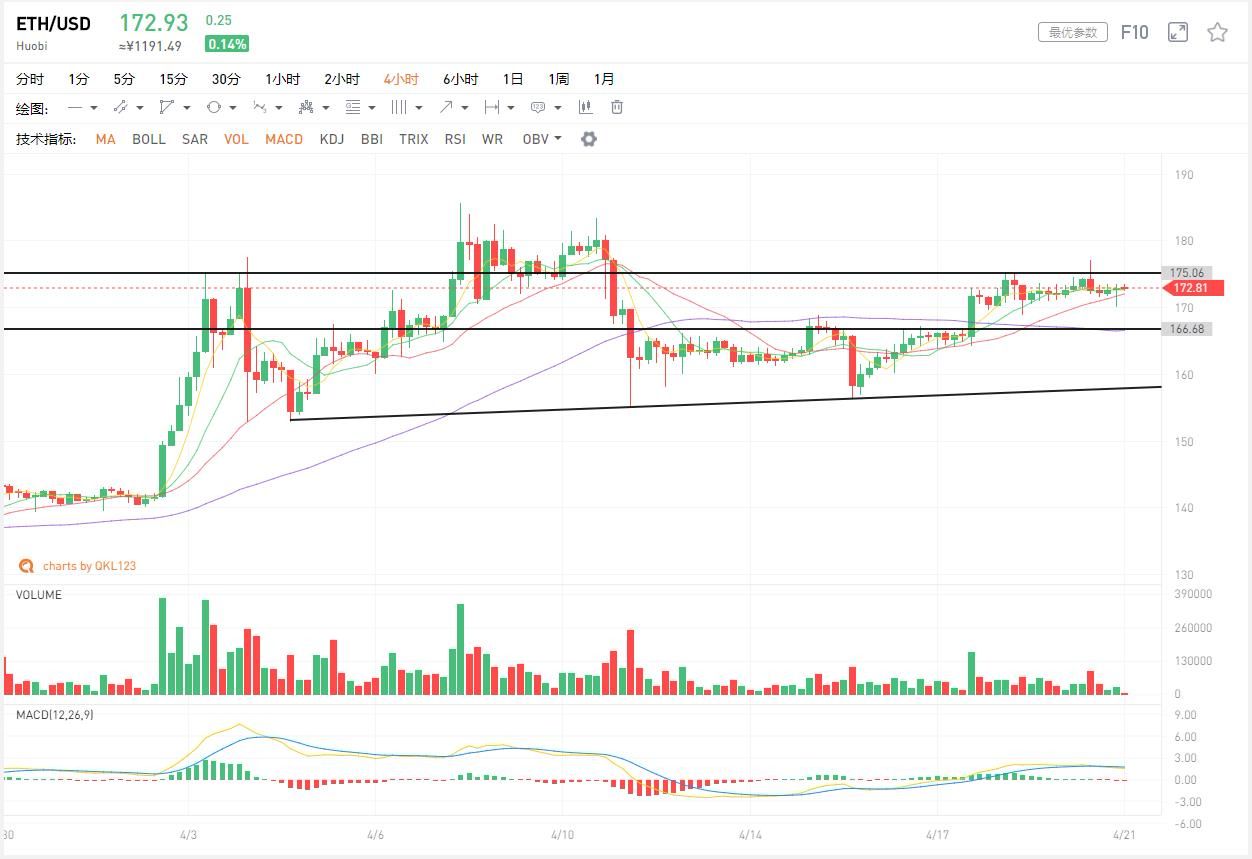 XRP followed the BTC with a small amount of diving, but the BTC quickly recovered. The target returned to the support at $0.32. At present, the amount of rebound is not good enough. It is very likely that the second foot will be down again. If the BTC's trend is very good, the target's decline will not be too deep. It is expected to be supported at 0.32 US dollars. This target will generally rise sharply at the end of the market. There are no signs yet. Does it mean that the market will continue to move upwards? 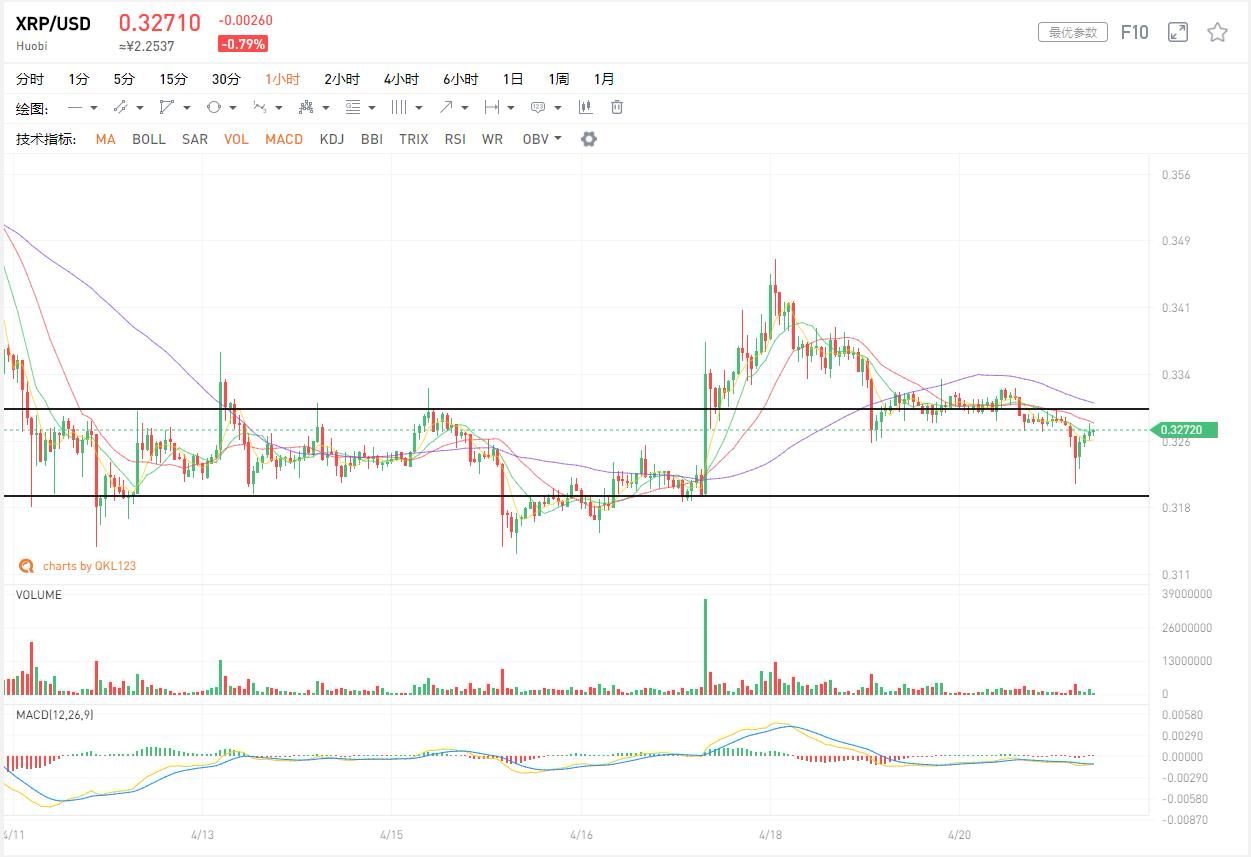 BCH did not have much consensus on the time of Auburn, but it is still necessary to pay close attention to whether the event will be further fermented. In the short term, the trend of BCH is not optimistic. If it is good, it will not break through the high point of 346.5 US dollars. It is more difficult to organize an effective attack. The price of the currency falls below 5 antennas, and the 5 antennas turn downwards. There is a certain suppression, the macd indicator forms the trend of the duck opening mouth, and there is suspicion of accelerating the decline. The short-term support is around 290 USD. At present, the target may be a triangle-level triangle or a flag-shaped flag. Finishing, if it is under the flag, it may further step back to 227 US dollars, I think this point has a strong support, can be low-suction, the medium-term target still sees 430 US dollars, but breaks 227 US dollars, the market End, stay on the sidelines. 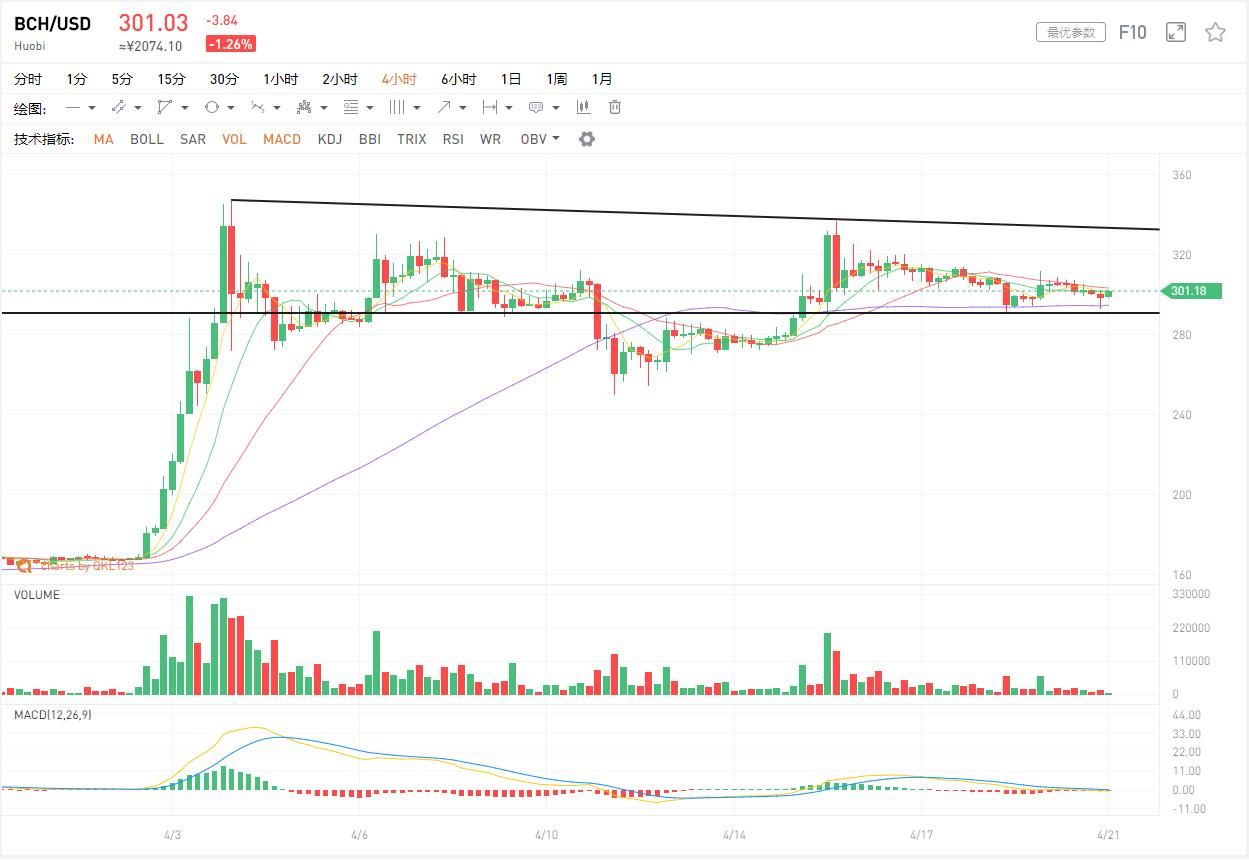 From the daily chart, we can clearly see that LTC fell and increased its volume. It is very difficult to rebound from such a trend. The top selling pressure is large, the moving average is tangled, and the macd is down. Keeping in a strong area above the zero axis, the target may use shock to digest the recent profitable disk; from the 4-hour K-line chart, the LTC has gone out of the triangle, but it is not oriented. The choice is a bit like a box volatility. The top of the box is around $85 and the bottom is around $75. If the volume breaks above $85, it is bullish to $100, and the bottom of the box is down to $62. 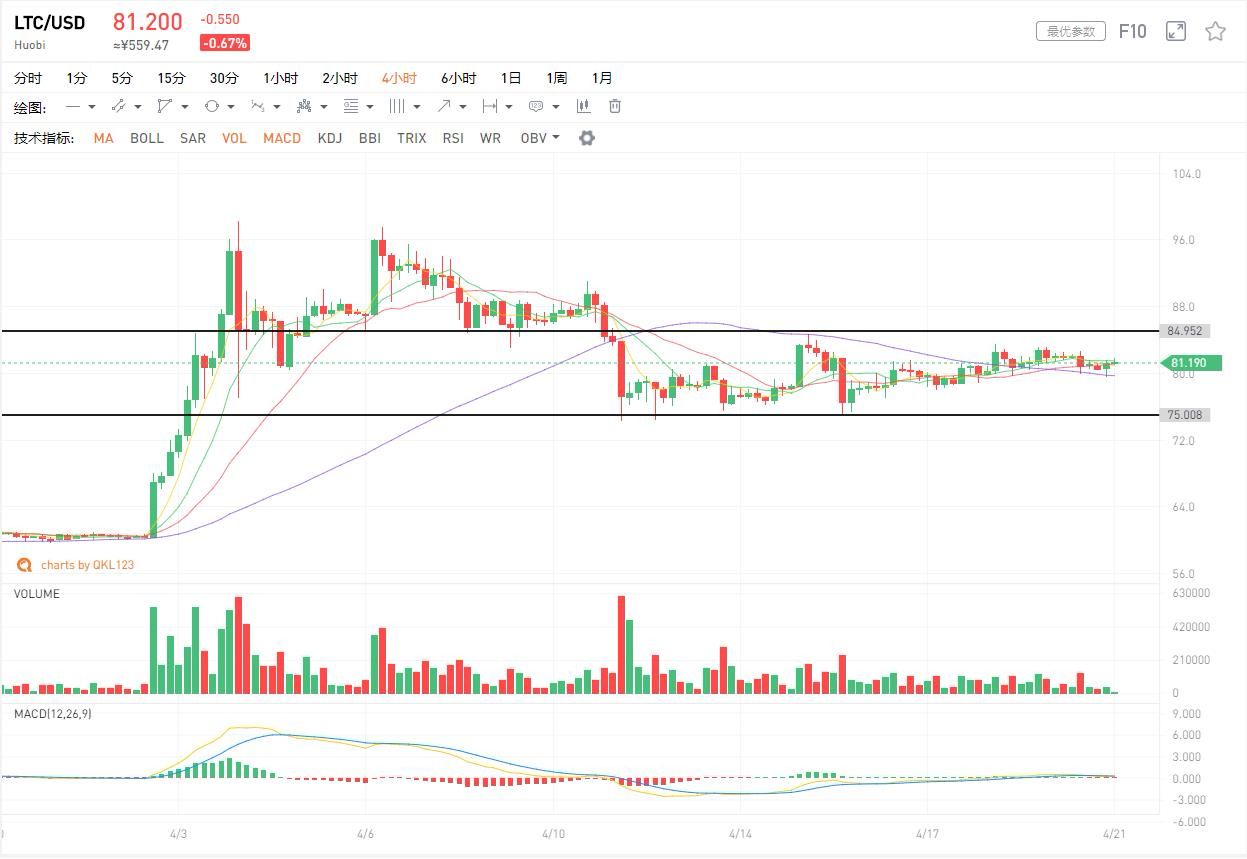 The trend of EOS in recent days is almost a straight line, 5 antennas and 10 antennas have been leveled, and the macd indicator continues to run downwards. From the perspective of time-sharing, the target is more like a small-level head and shoulders trend. The volume of the right shoulder has shrunk severely and has not yet fallen below the neckline. The neckline is the uptrend line below. If this position is to attack 5.9 USD, it needs to be replenished to pass, and once again, the support of 5 USD is supported. The probability will fall below, so it is still based on the risk. The rate of killing below 5 US dollars will be very fast. If you kill it below 4.4 US dollars, you can low-slow, effectively fall below the market, wait and see, and the volume will exceed 5.9 US dollars. The bearish is ineffective and is bullish to $6.8. 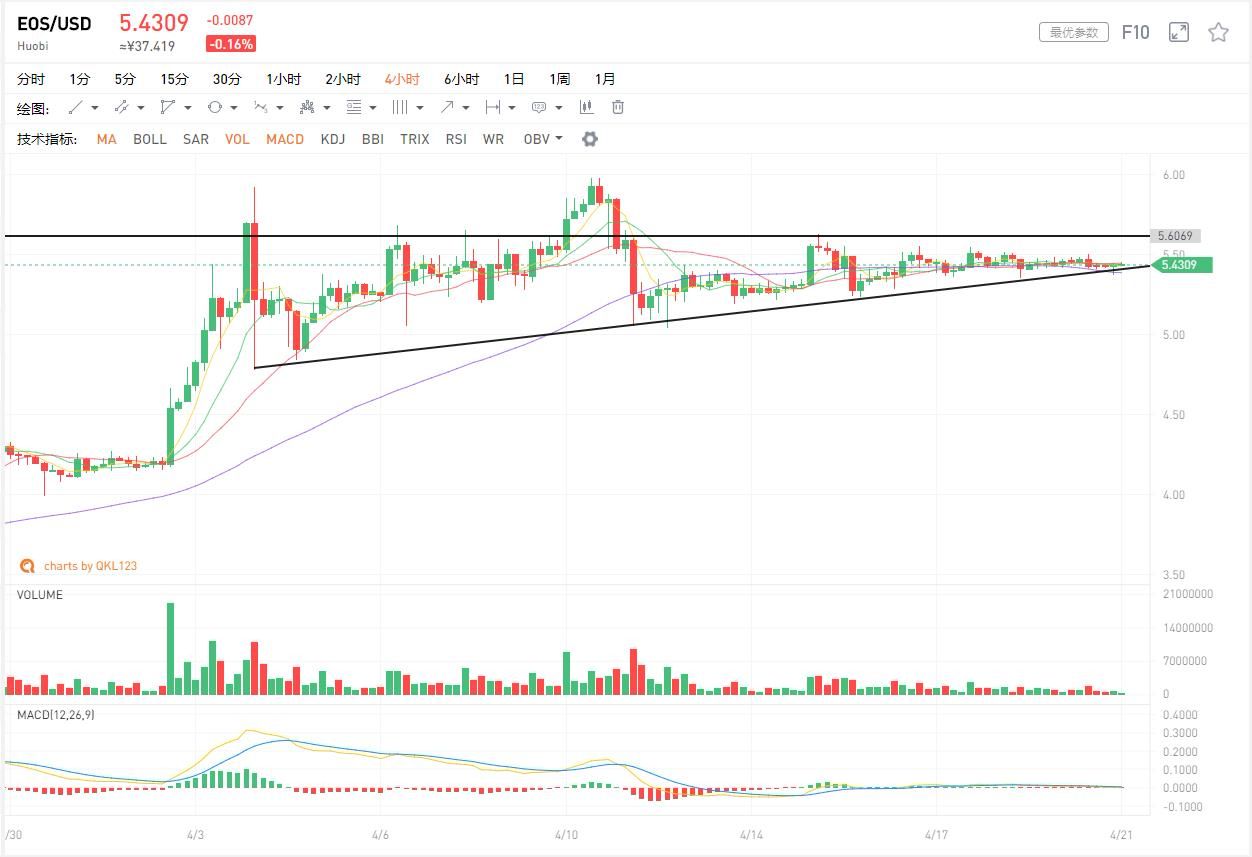 The main force of BNB is really a good one. At present, the target has already hit a record high. The current new high is not an effective breakthrough. It is not stable, and the transaction volume is only slightly enlarged. The new high will not be shocked or it will be stepped back. We just use the target as the observation target, do not operate, pay attention to the gains and losses of the 5 antennas, and the 5 antennas may fall back. 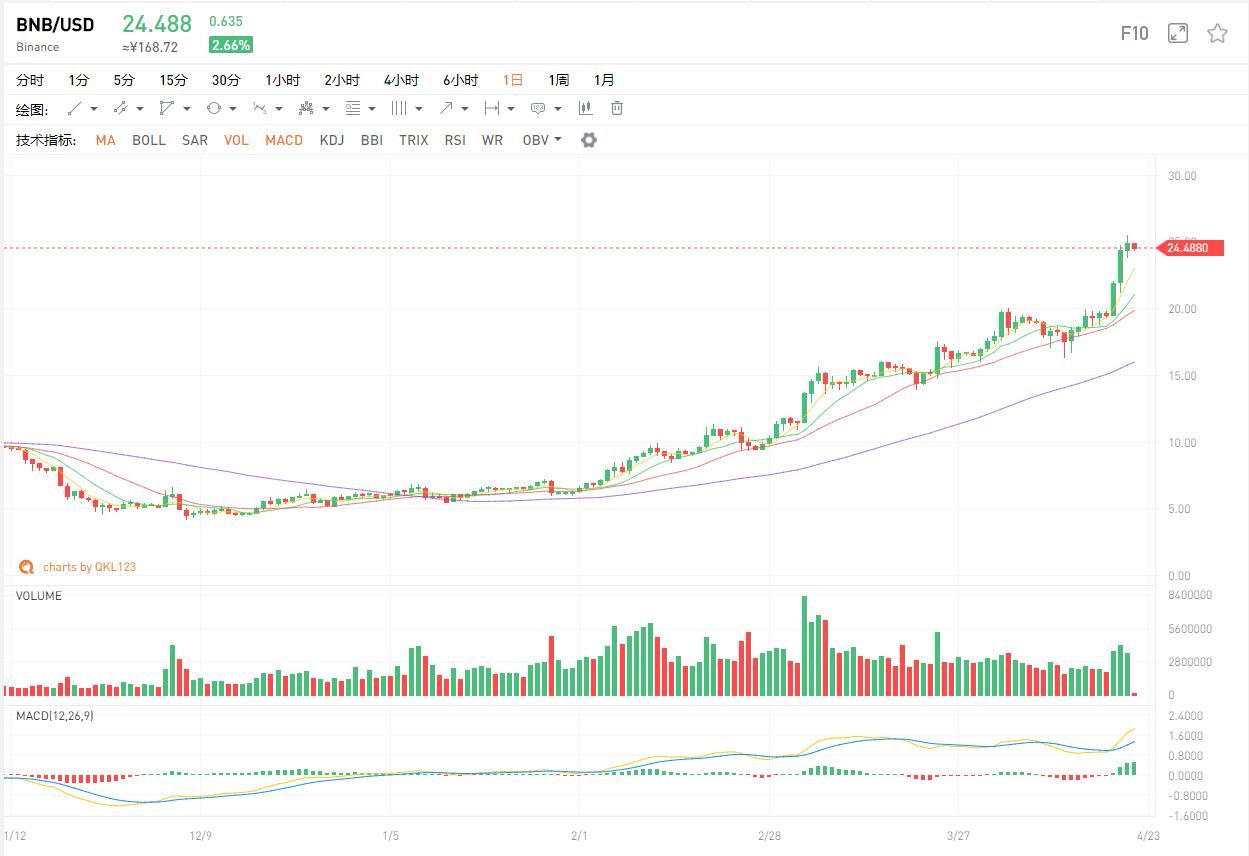 TRX has not yet reversed the neckline after falling below the neckline position. It is still oscillating above the support level of $0.025. It may follow the pressure of the upward test neckline in the market. The volume breakout can be actively done, but it is not excluded. Take the trend of an ABC, that is, there is still a demand for the C wave to fall, can be low in the range of 0.02-0.024 US dollars, effectively fell below 0.02 US dollars to leave. 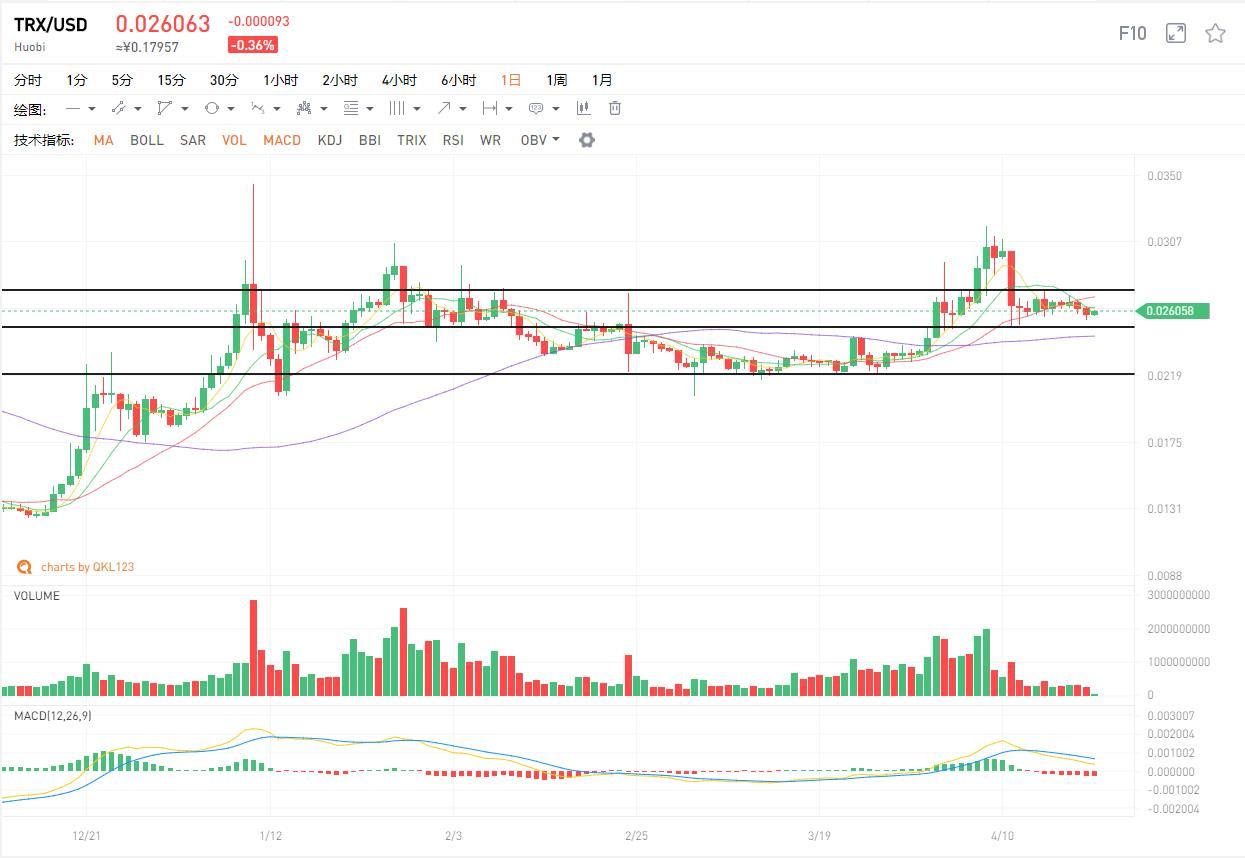