Whether in the Chinese or English world, as long as you search for the name of Don Tapscott, it will appear with the keywords of the father of the digital economy, the blockchain and so on. If you enter Don Tapscott's official website, the banner on the top of the home page is his famous TED talk on how the blockchain is changing currency and business.

At the recent San Francisco Blockchain Conference, PANews interviewed the digital economy. This Canadian entrepreneur who has been eclipsed is still active in the frontier of the blockchain world. Not only does his book Alex Tapscott write a book about the blockchain theory and application of the blockchain theory. (Related reading: Is the blockchain really a bad thing? | The author of the dialogue "Blockchain Revolution" ), published many speeches, and further promoted blockchain consulting and research projects – allegedly, Don's The research institute's areas of concern include 14 directions of “blockchain+”, and even energy-related projects, and research cooperation with Tencent and other companies in China. 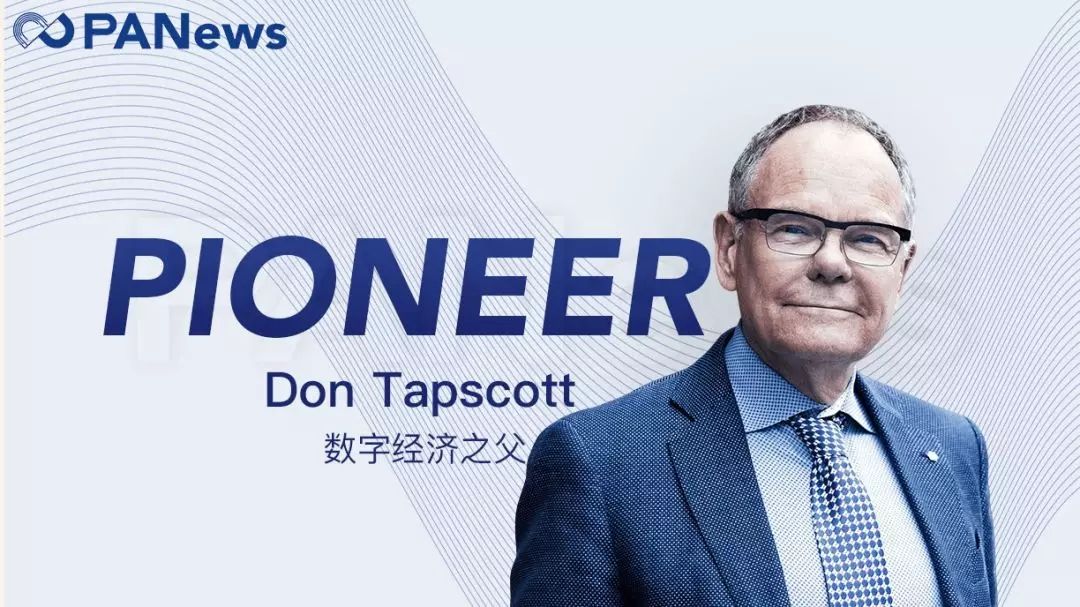 Don is not a Bitcoin Maximalist. In terms of business applications and currency globalization, Don is more optimistic about the prospects of stable currencies. He believes that all stable currencies are likely to contribute to a global currency. Don's opinion is also true to the arguments: The stable currency of Tether is a good observation window. Bloomberg said on October 25 that CoinPayments, one of the world's largest digital currency payment processors, said that USDT's use in the payment sector has been as high as 30%, and another payment processor, B2BinPay, shows that USDT is on the C side. The use of the B end increased by 20%.

Of course, when talking about whether China's DCEP can become a global currency, Don did not show a positive attitude in the country. It is affirmation of the global cryptocurrency that the Bank of England Governor Mark Carney called in August, and believes that the latter can take on this responsibility.

Don’s attitude towards supervision is very objective. On the one hand, he criticizes the prevailing government’s strict supervision of the blockchain with the certificate, and on the other hand, he clearly opposes “the central bank should not be involved in the blockchain”. Such a radical argument. When talking about the blockchain format of the home country of Canada, Don’s attitude is quite calm, and he believes that Canada’s regulatory environment is still hindering the growth of the country’s blockchain format (the Canadian blockchain ecological map that PANews previously authorized to compile The Block). And think that the problems in the blockchain between the United States and Canada are similar.

Looking back at Don's words in the interview, he can feel his uniqueness everywhere – compared to the "revolutionary optimism" of many blockchain practitioners, he is more inclined to a rational and optimistic attitude, in affirming the prospects of the industry. At the same time, without losing the respect for the strength of the "constructionist", this may be precisely the state that all blockchain practitioners should learn and accept after the Chinese government has fixed the blockchain industry.

The following is an interview record selection, Enjoy~

01 PANews: The Chinese government has recently accepted blockchain technology in the country. As you said, the government's heavy deployment of this technology will have a huge impact on the entire industry. I want to know, what do you think of this?

Don: The speech delivered by the Chinese national leaders is very good. Every country should follow such practices and policies. In his speech, he said that the blockchain is a key technology for the country to build an innovative economy in the future. I fully agree with this. According to Mark Carney, governor of the Bank of England, from a global perspective, people will choose their country's legal currency instead of bitcoin to buy food in restaurants, buy Starbucks or buy real estate. And the legal currency will be the currency of the DCEP as proposed by the Chinese government. In China (the government's speech), there is an opportunity not to mention that all stable currencies are likely to contribute to a global currency.

02 PANews: Yes, that is the global vision of Libra, a cryptocurrency . Then do you think China's legal digital currency will eventually become a global currency?

Don: I don't think China's legal digital currency should try to be a global currency. The latter should be in the form of a global cryptocurrency that the Bank of England Governor Mark Carney called for to replace the dollar hegemony. (Note: At an economic policy symposium held in Wyoming, USA in August this year, the Governor of the Bank of England proposed a digital currency supported by central banks to replace the US dollar, the synthetic hegemonic currency "Synthetic Hegemonic Currency" ).

All of these things are very important for many reasons. In terms of currency, one of the reasons is that the global economy and the national economy are highly volatile. The central bank needs tools to make everything that happens in the economic operation present with greater transparency so that it can There are very good countermeasures.

The central bank is biased towards giving the society more money, rather than giving it to large commercial banks, and hopes that the latter can make a difference in this regard. They accurately place money on people's equipment or a certain part of the crowd.

03 PANews: Like the situations you just mentioned, how long do you think they will happen?

Don: We can't predict what will happen in the future, but the future can be achieved through hard work. Many of the technologies predicted in the industry in the past have actually been realized today.

Don: Why is it so different? I do not know either. My point is that people should keep an open mind. Although all countries will introduce their own legal cryptocurrency, it should also allow or even encourage the development of other cryptocurrencies and blockchains. One reason is that money is just one of hundreds of applications for blockchain technology.

If the government tries to stop the development of blockchain technology with a pass, it is preventing the full growth of the economy. As I mentioned in my speech, we will experience the largest era of asset digitization. It is not only related to currency, it is also related to the digitization of all assets such as securities, intellectual property, data, identity, music, and so on. These cannot be achieved in a centralized manner via a centralized bank. It will grow organically from innovations throughout the economy.

So this is not a game relationship. Some people believe that the central bank should not engage in blockchain-related matters. I don't agree with this view because we do have a national form. We have a central bank that tries to help its economy manage its economy better with monetary policy.

Don: I think they are making a bad mistake. Regulators need to maintain a balance between protecting investors, consumers and citizens, and building innovative economies. And many countries are not doing well in this regard. This is related to the regulator's understanding of cryptocurrencies, which, when mentioned, associates them with crime. However, this is not the case.

Our regulatory system needs to make a huge difference. You know, in general, it is very difficult to issue a pass in a Western country. Securities-related regulators will identify them as securities, and regulators in the tax department will identify them as revenue and tax them. Regulators in some other institutions may identify it as an identity, data, or something else, and use laws to protect things like privacy. You are faced with these competing regulatory authorities, which adapt to the old economy but do not match the needs of the new economy.

06 PANews: So do you think it is up to the parties to work together to advance the development of the blockchain , rather than fighting alone?

Don: Yes, this should not be decided solely by the government, but should involve multiple stakeholders, including the government, the private sector, civil society, non-governmental organizations, and academic institutions. This requires a national level to initiate a process of discussion to participate in the discussion of the technology and to come up with a viable strategy, because our current institutions and institutions are products of the industrial age, but we have entered the digital age, then this Need a change and "update upgrade."

07 PANews: You are based in Canada. I want to know how the Canadian government is doing this.

Don: The situation in Canada is very similar to that in the US, and there is nothing better. A survey we conducted showed that the regulatory environment is the first reason that hinders the development of the Canadian blockchain industry. Therefore, the problems in the United States and Canada are very similar.

08 PANews: I believe that you are working to improve this situation.

Don: Yes, we are doing this. We also have many institutional members in China. Tencent is one of them, and a BRI blockchain research institute has an office in Nanjing. We are also likely to attract other Chinese companies to become members of our blockchain research organization.

09 PANews: I believe many companies are very interested in such cooperation. Thank you for your answer. There is another problem, I noticed that you are involved in power-related matters and have an understanding of this particular area of ​​the blockchain industry.

Don: Are you referring to an energy project?

PANews: Yes, that is the energy project. I want to know, in addition to the above projects, what projects are you paying attention to through your research center?

Don: We are observing how the blockchain changes business and government. The things we focus on have little to do with cryptocurrency investments, and others have a lot of attention to cryptocurrency investments. Our main focus is on the blockchain's transformation of fourteen industries, including supply chain, financial industry, manufacturing, media, energy, resources, telecommunications, and more.

10 PANews: I watched your last speech video and it was very inspiring. I think you are very optimistic about the future of the blockchain ?

Don: Again, the future is not something to achieve. I am neither an optimist nor a pessimist, but I think we do have a lot of opportunities because the information internet has created some good things, but it has also caused some problems. Now we have a value internet. The blockchain has been rooted and flowered. It won't eradicate our problems, but it gives us another chance to make everything better. So I am very determined about this and will continue to do things to achieve it.

Yang Jie, Chairman of China Mobile: China Mobile will build security and deepen the application of technology such as blockchain Swiss Federal President Maurer: Technology areas such as blockchain can deepen cooperation between China and Sweden