Blockchain is one of the important applications in the Web 3 era, and Encryption has long focused on this topic.

Web 1 was an early form of the Internet. At the time, the internet was a read-only static HTML page directory, and the interaction between users was very limited. Web 2 began around 2004 and consists of social media, blogs, and online communities that allow end users to collaborate in real time.

Compared to Web 1 and Web 2, Web 3 is harder to define. For the most part, this is because Web 3 is still in its infancy. Ethereum is the leading blockchain network in the Web 3 era and was launched in 2015. To date, many practical technologies dedicated to improving the user experience of the Web 3 terminal are still under development.

Despite this, there have been consensus on some of the key attributes of Web 3, which the industry generally considers to be the opening of a new Internet era. The goal of Web3 is to provide a more user-centric experience in an intermediary-free read-write network. Technology allows individuals to control data privacy and data ownership by default. Web3 also introduces a decentralized Internet, in which third-party efforts to “rent-seek” have gradually reduced control over user interaction and value transfer. In essence, Web3 technology provides the foundation for services and markets such as P2P communications and payments. Blockchain technology and digital assets play an important role in shaping the current development and decentralization of Web 3.

Since BTC launched the world's first blockchain in 2009, blockchain technology has evolved in several key areas. By the middle of 2019, the development of Ethereum has achieved fruitful results – the number of developers is up to 250,000 to 350,000; the most decentralized applications, more than 2,200, monthly active users are about 140,000 people. The above data are considered to be the best demonstration of the development of the blockchain ecosystem as of now.

Despite this success, the adoption of Web 3 applications is still far behind Web 2. For Ethereum and other blockchain communities, Web 3 still has a long way to go to become the standard or goal of the global Internet.

What is the most prominent technical challenge for the Ethereum blockchain ecosystem in 2019? What solutions can be implemented to drive user adoption? The following are the three main aspects that need to be considered.

The lack of scalability is one of the biggest dilemmas currently facing the Ethereum blockchain. At any time, when the Ethereum block link receives more traffic, the associated costs (gas fees) and the time to complete the transaction will increase significantly, which ultimately hinders the adoption of the mainstream. As of August 2019, the Ethereum main network can only handle 15 to 25 transactions per second. Of course, there are some blockchain networks that can handle more transactions, but this often comes at a price (for example, sacrificing decentralization or security).

Most of the blockchains currently in use still do not reach the level of scalability offered by Web 2 or French currency database technology. For example, Visa has been able to reach 1,700 tps and claims to be able to handle up to 56,000 tps. The recent goal of Ethereum is to reach at least 100,000 tps.

Although Ethereum has been working to promote scalability solutions, most of them are still in development or in the test network phase.

The extension of Layer 2 makes offline trading possible. All in all, this preserves the original advantages of the blockchain (safety, invariance, decentralization) while also reducing costs (slow confirmation time, volatility/gas cost, etc.). The sub-chain and state channel are the two most eye-catching Layer 2 expansion solutions developed and implemented by the Ethereum community in recent years. 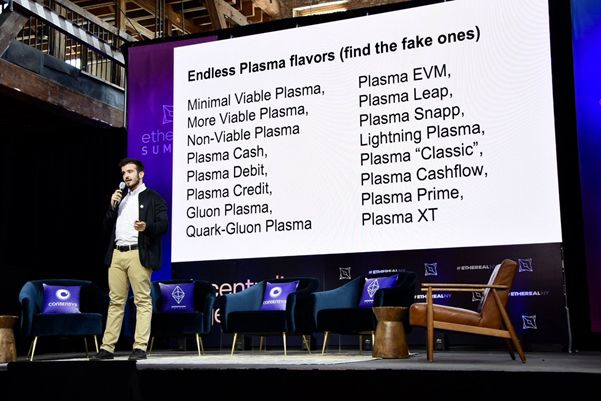 Will competition between Plasma developers lead to innovation in Layer 2?

Fragmentation is another scalability solution that is a kind of database partitioning that divides a larger database into smaller, faster, and easier to manage parts. This is called "data segmentation."

In the Web 2 era, fragmentation is very simple. For example, depending on the user's geographic location, information related to different customers is placed on different servers.

However, implementing sharding in a blockchain is much more complicated. Traditional blockchains require all nodes to carry all historical transaction data for a given chain. This slows the blockchain speed, but it also makes the transaction safer and solves the "double flower" problem. Fragmentation allows the node to securely process transactions using only a portion of the transaction data history of the blockchain, thereby speeding up the transaction. The segmentation chain is expected to be available for the Ethereum main network by 2020, including Phase 1 of Serenity (Ethernet 2.0). However, in the initial release of Phase 1, the slice chain may not be an immediate scalability solution.

In addition to Ethereum, some projects have already achieved fragmentation. Zilliqa launched its main network in January 2019, becoming the first project to use an operational segmented blockchain. Currently, the Zilliqa blockchain can handle 2,828 transactions per second. 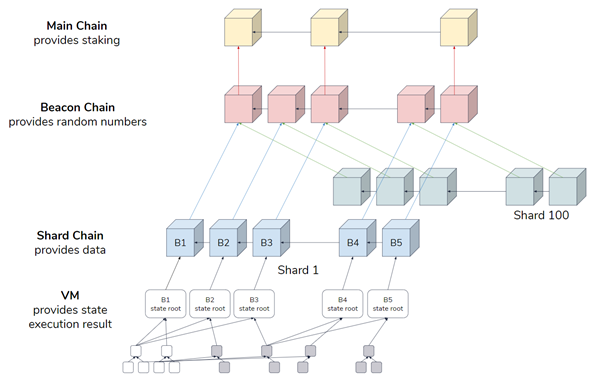 The picture above is the illustration of Serenity (Ethereum 2.0) after the introduction of the shard

In the PoW mechanism, approximately 90% to 95% of the computational power is used to generate hash values ​​(random numbers). Once random numbers are generated, they have no other use. From a computational point of view, this not only causes waste of resources, but also leads to other problems, such as the cost of transaction verification for miners who cannot be successfully mined, and the energy-intensive hardware mining equipment. Environmental pollution.

The Ethereum 2.0 core infrastructure beacon chain is undergoing major changes to the fragmentation status, enabling DApp developers to choose to invoke the beacon chain contract that mimics the Ethereum 1.0 execution environment and develop 2.0 in a familiar development environment. The basic idea of ​​this adjustment is that the contract and ETH as the underlying layer concept only exist on the beacon chain, while the shards can continue to maintain their own execution and state. The beacon chain was developed by Eitafang founder Vitalik Buterin and developed by the fragment development team Prysmatic Labs. In May 2019, PrysmaticLabs announced that the beacon chain test network was officially launched for public access and provided an open community of consensus nodes.

The beacon chain is expected to be officially launched by the end of 2019, which indicates that the transaction verification method of the Ethereum main network will be converted from PoW to PoS.

Currently, several major blockchain projects (EOS, Tezos, Tron, Lisk, etc.) have implemented PoS. Compared to the PoW blockchain, the PoS blockchain can handle more average transactions per second. Switching from Ethereum to PoS provides better scalability for the blockchain and the Web 3 applications running on it. The ESP's PoS solution, Casper CBC, has been led by Vlad Zamfir since 2014. PoS (Phase 0) and Fragmentation (Phase 1) are integral parts of the Serenity roadmap.

The Web 2 era has some typical features: centralized servers are vulnerable to large-scale hacking, and business models are overly reliant on advertising—this requires the sale of sensitive user data, and data privacy becomes a chronic disease (the rules such as GDPR are based on this). At the above level, Web 3 has already shown its superiority.

Of course, new challenges have surfaced. Since the data stored on the public blockchain can be viewed publicly on the block browser, the data is hardly commercialized by a centralized entity like the Web 2 era. In addition, as long as the public address of a particular object is known, it is easy to view its transaction history and total asset value in real time, which leads to new privacy issues. In the traditional financial industry, the above situation is never possible.

The AZTEC Agreement is a project that provides privacy for Ethereum transactions for financial institutions. The zero-knowledge privacy agreement for the project is already on the Ethereum main online line. The logic behind it is to encrypt "values" by homomorphic encryption and range proofs while allowing transaction verification. Among them, homomorphic encryption performs an arithmetic check on the encrypted number, and the range proof ensures that a negative number (a large positive number in a finite field) cannot destroy the "double flower" check mechanism.

The standard transaction cost with AZTEC requires 800,000 to 900,000 gas. Although this is still a reasonable transaction cost range, such private transactions will become cheaper as the Ethereum blockchain is updated in the future. If EIP 1108 is implemented, the cost of privacy transactions provided by AZTEC may be reduced to 300,000 or less.

In addition to AZTEC, there are other privacy trading solutions on Ethereum. For example, Zether, a fully decentralized, secure payment mechanism developed by researchers at Stanford University. There is also the public version of the EY Ops chain developed by Ernst & Young.

Web 2 has its own advantages. For example, the extensive use of graphical interfaces makes them more interactive, greatly improving the user experience. At this point, at least for the average user, the Web 3 interface is usually not as accessible as Web 2.

For those accustomed to using simple Web 2 passwords, using a private key to access funds stored in a digital wallet is a new learning curve. In addition, if funds are stolen or keys are lost, there is basically no effective recovery method. Even for those familiar with blockchain technology, it is common to enter the wrong hexadecimal code to cause financial losses.

How the mobile experience is consistent with the experience provided by the browser, this issue has yet to be resolved. Of course, objectively speaking, there are far more UI/UX issues than scalability and data privacy issues.

In addition, the criteria for judging whether a Web 3 application is easy to use are quite subjective, based on the opinions of each user. This makes it more difficult to determine the "unknown factors" that are required for mainstream adoption.

There are several effective technologies available to address the UI/UX aspects of Web 3. For example, MetaMask simplifies the process of storing funds and improves accessibility (dApps connected to MetaMask) on the basis of security. User-readable wallet addresses are now available through Ethereum Name Service (ENS). This not only makes it easier for people to remember their wallet address, but also reduces the possibility of sending funds to the wrong address.

In general, Web 3 applications will become more accessible through continuous improvements to UI/UX. 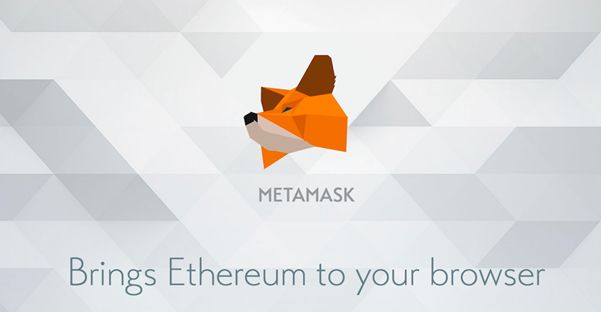 What is the next step?

There are many practical use cases for blockchain technology, and the term "Web 3" is no longer a castle in the air. But it will take time to realize its grand vision. Fortunately, we have seen the changes that are taking place.

The Ministry of Industry and Information Technology will promote the healthy development of the blockchain industry around key aspects such as standards.

Bitcoin continues to strengthen, short-term return to above $10,000