What is the cause of the bitcoin skyrocketing?

Bitcoin broke out today, and it suddenly rose by 5,000 points. Due to the sharp rise in prices, the data of major exchanges appeared to be stuck, and the highest point was not uniform, but it basically broke through the 5000 mark. The market has always believed that the resistance level of 4200 points has been broken in an instant.

Market rumors: Monday (April 1) reported that the US Securities and Exchange Commission (SEC) unexpectedly announced the approval of the listing of two Bitcoin exchange-traded funds (ETFs). At the beginning of next month, Bitwise Asset Management and investment management company VanEck will officially release the Bitcoin ETF.

It was later confirmed that the news was a fake news released by the April Fools Day.

A false news triggered a crazy rise in digital goods. The repressed investment sentiment, with this false news, got a catharsis. Some people have become rich, and there are also many well-known big bangs! OK today, not a few. The futures market has always been a game of life and death, too unfriendly. The old cow is still here to remind everyone that there is no 3-5 years of investment experience, do not touch futures and contracts, why not have money to know.

Do a good job in stock, you can make a lot of money, people are most taboo, greed will blind their eyes, it will make people take risks. The digital currency market is still in its infancy, and the volatility itself is very large. Even the largest bitcoin on the plate has risen by 20% today. A big man, only use 5 times leverage to short, has a small leverage ratio, can lose 20 bitcoins, the risk is very large.

In stock, even if the price falls, the currency is still there, and at the current price, the currency with a slightly better qualification will be pulled up later, and there will definitely be opportunities to make money, just for a long time. At this time, the bullets are precious, and everyone must cherish them. Now ten thousand, when waiting for the bull market, it is more than ten thousand, hundreds of thousands, good operation, can reach a million, seeds can not be destroyed in winter.

Bitcoin is currently trading at 4,600 points. How do you go later?

Some people say that it will not be like the USDT storm on October 15 last year, and then waterfalls in a few days; others say that it will directly pull up to 6000 points. Everyone has their own opinions. The benevolent sees the wise and sees wisdom.

The old cow believes that there are a few points to pay attention to,

March has passed and the uncertainty of the policy has passed smoothly. The wet season is coming soon, and the computing power of Bitcoin will increase periodically. The miners hope to reach the maximum yield during the short-term flood season and have a strong willingness to pull up. There are rumors that the mining machine is not necessarily a hole in the wind. You can focus on the boss of the mining machine market, the bit cash BCH will also have a strong willingness to rise, to focus on the layout!

Everyone is most concerned about the price. Today's high reached 5,000 points, just in the middle of two key points, 4480 and 4880. As long as the 4500 is held in the later stage, the probability of continuing to rise is very high, and it will not return to 4200 points in the short term. After the big rise, basically set up the late trend, or up, there will be shocks in the 4880 long and short, this wave of views, can see 5300.

During the day, it will continue to pull up to 4830, and then there will be a small correction. During the Ching Ming Festival, 4500 will be an important support level.

Today's heavy volume rise, the world data shows that BTC, ETH, EOS ranked the top three net inflows of funds, and the net inflow of BTC was nearly 300 million US dollars. The willingness to make big money is very strong, especially in stock. In terms of futures, long and short are intertwined, but in stock, large funds are actively deployed and recruited.

At present, Bitcoin is opening up the shocking space, which is much stronger than the bottom of the bear market in 2015. This bottoming interval, initially drawn to 3155 – 5300, can be basically confirmed, 3155 is the bottom of the bit market of bitcoin, there will be no new low.

(The point is based on the fire currency network) 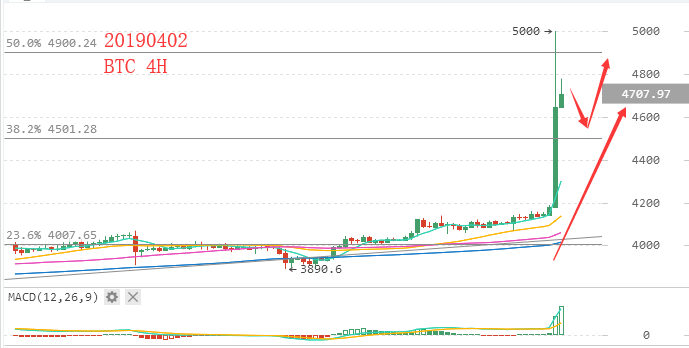 Technical Comments: Bitcoin reached the resistance level of the weekly level MA30. After the volume was sharply enlarged, the subsequent funds were short-lived. The resistance at the top 4880 was very strong. The short-term could not pass. Today, the first resistance to 4830 is short-lived. Later, it is still bullish. If you return to 4600, you can consider doing more.

Technical Comments: Ethereum is in the rising channel. At present, the vicinity of 153 is the pressure level of the recent high-point trend line. The recent performance of Ethernet is not strong. If there is a callback, or the first batch of mainstream currency, 148 has small support. .

Technical Comments: Although there is a large outflow of bit cash, the trend is very strong, the willingness to pull up is very strong, and the market outlook is dominated by multiple orders. Recently concerned about the resistance of 200 points above.

Technical Comments: Grapefruit has reached the key resistance level of 5.0 years ago, and has been continuously pulled up recently. The position is already a bit high. It is best to keep watching. The spot can continue to linger. Futures are best not to touch. At present, the indicator is very strong, and it is mainly adjusted to a certain position.

Pay attention to the public number of "The Bulls and the King", and check the latest strategy in the first time.

Report: The volume of transactions on AA-rated exchanges increased by 29% in July

Wan Hui: The "mine disaster" is a dynamic and relative state. Finding cheaper, stable, and controllable electricity around the world is the correct posture for mining.