Foreword: The FAMGA here is the first letter of Facebook, Apple, Microsoft, Google and Amazon, which refers to the technology giant. Technology giants may be late, but never miss it. Due to its distributed nature, the blockchain is completely different from the technology giants. What is the relationship between them in the future? Is it a completely competitive relationship? Or are they competing with each other? What will happen in value capture. The future will be presented one by one. The author of this article is Lou Kerner, translated by the "Blue Fox Notes" community "Wang Zelong".

Cryptography is a new computing paradigm that will generate more breakthrough innovations and create more wealth over the next 20 years, compared to the Internet's achievements over the past 20 years. As a VC, the problem I face is who will capture this massive wealth creation. They will continue to belong to the Big Five, which has captured the vast majority of the technology for the past five years, and will still belong to the new audience (the native native of the encrypted world).

In this article, I will: 1) define the encrypted world I am talking about; 2) highlight the strengths and weaknesses of the "two sides of the war"; 3) clarify the decisive factor in the upcoming war of capturing the future wealth of cryptocurrencies.

How to define an encrypted world?

There are four emerging technologies:

3. Smart contracts – also known as if then patterns (if-this-then-that statements)

4. Zero proof of knowledge – can prove something without displaying any information, also known as magic

The success/failure of these business models is increasingly driven by this subject:

6. Community – A group of people who help cryptocurrency projects succeed, they are motivated by the spillover value of the project's success.

The main wealth creation is concentrated in FAMGA

The first article about FAMGA and the growing impact of the oligopoly was in January 2017. In the first month, less than 200 people read the article. But I think this phenomenon is very important, and another article about FAMGA was written three months later. This time, more than 10,000 people read the article in the first month, which was the most read article in their own article.

My simple premise is that each of these businesses is increasingly becoming a data business, and the more relevant data there is, the stronger the competitiveness. FAMGA dominates the aggregation of data. The obvious negative impact of this phenomenon on the world includes stifling competition and innovation. The power of the oligopoly can be seen in its growing share of the market value of top 100 companies in the United States: 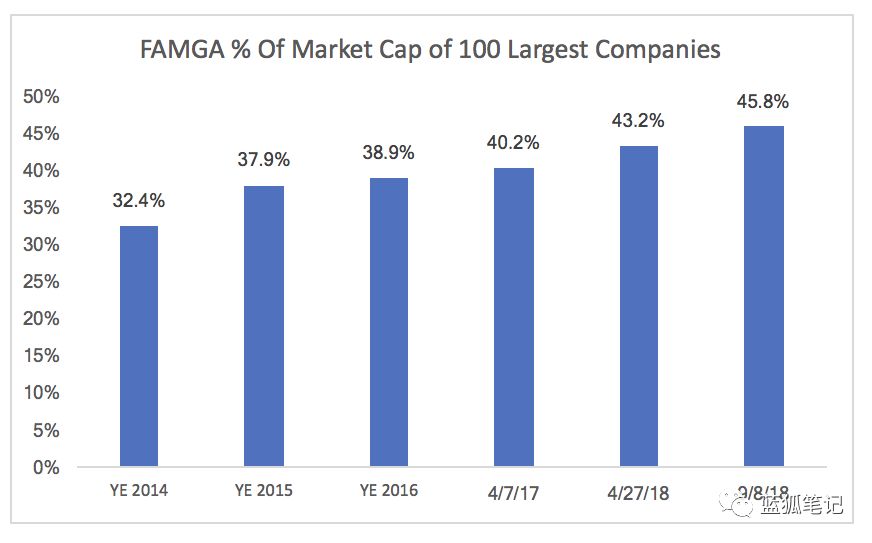 It is worth noting that since the end of 2014, FAMGA has accounted for more than 63% of the value of top 100 companies.

Although the FAMGA phenomenon is worrying, I present my most optimistic thoughts in the image below, which shows how the market value of the top 100 technology companies in the United States has changed over time: 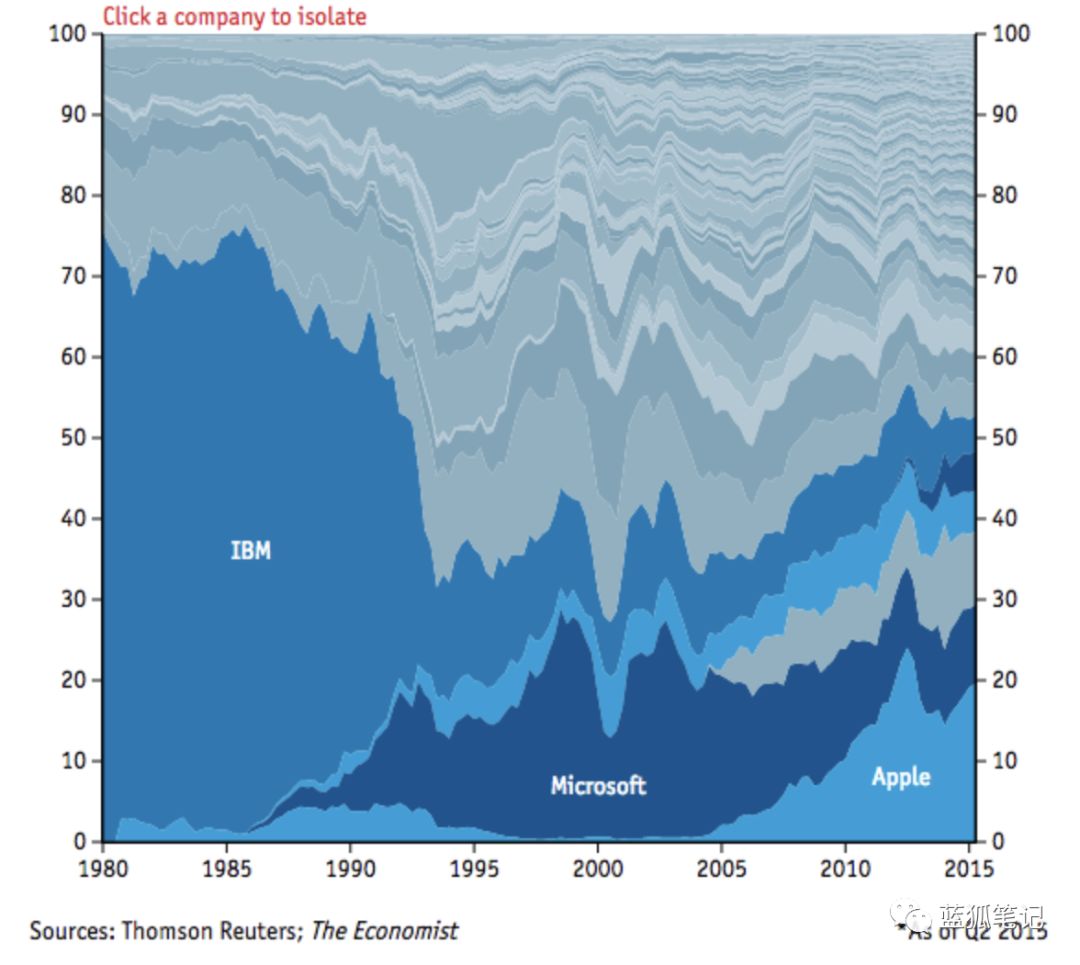 It shows that we have gone through many stages and that no company can be permanently dominant. The first is IBM, followed by Microsoft, and now it is FAMGA. Although I have not seen the existence that can threaten the dominance of FAMGA, I am encouraged by the history of change in dominance – nothing will remain constant. Two months later, I saw the crypto light of the encrypted world.

Why is the encryption world ready to drive large-scale wealth creation?

Because we have new tools, it can drive large-scale wealth creation, and it is already in effect.

Whether it's valued at $68 billion (according to the Wall Street Journal) or $72 billion (according to CB Insight), Uber is widely regarded as the world's most valuable startup. Uber was founded in March of 2009. Almost at the same time, in January 2009, Satoshi Nakamoto dug out the first bitcoin. Today, the market value of Bitcoin is $107 billion (even after it fell 68% from its December high. The current market value is $93 billion, fluctuating around $100 billion). The cryptocurrency proves that it not only drives large-scale value creation, it also creates more value than the old model.

Although there are many factors that influence the value of Bitcoin, in the final analysis, the beliefs of the community are affecting the price of Bitcoin. At first glance, Bitcoin seems to be a game of confidence or a Ponzi scheme. But then I realized that all assets are themselves a game of confidence. Facebook is a confidence game. On July 26, 2018, Facebook disclosed its revenues, and the results were not satisfactory, and its share price lost $119 billion. This is the single-day maximum loss of the market value of a single company in human history. People learn new information and lose confidence.

With the improvement of tools, the development of the network, the increase of throughput, the simplification of the UI, the solution to the biggest problems of the community (such as governance issues, token economy…), the new business of encrypting the world. The model will drive large-scale disruptive innovation and wealth creation.

But who will capture this value creation?

Based on the Occam razor principle, FAMGA will capture the main part of the creation of cryptocurrency values.

The principle of Occam's razor is "If you don't have to, don't add entities." From my perspective, the simplest answer is that the industry landscape will not change.

FAMGA will continue to leverage its data strengths. And its high scalability and all other advantages, overcoming the cryptocurrency of the native community, and capturing the main part of the creation of cryptocurrency values. It sounds like a Star Wars. Occam's razor suggests that the Empire is the dominant force, and the simplest solution is to defeat The Force.

There is a better way, and the cryptocurrency community can be the deciding factor.

In his excellent article "Why is decentralization important," Chris Dixon emphasizes the natural evolution of the platform, which also includes FAMGA:

Ultimately, FAMGA is responsible to its shareholders and employees. As a large number of users have been included in FAMGA, their future profit growth can only come from the value extraction of stock users and other corporate users in the ecosystem, but not through incremental users. (Blue Fox Note: This is what the Chinese Internet industry often mentioned before: Where is the second half of the Internet? Essentially, the user's growth dividend is gone, and without new users, the industry has entered a brutal competition that kills each other. stage.)

I don't think these companies are evil. Seeking profit growth is the nature of capitalism, and I am a capitalist. But at the same time I am also an individual. I believe that new business models are being built, which will bring better results to mankind, not just economic gains (even if they are huge).

They empower communities, they give users privacy, and they support forks (this is a feature rather than a vulnerability). I can also say more about the benefits it brings. If people in the world of encryption can take full advantage of the true potential of the community, this is the only way to counter FAMGA's vast competitive advantage and capture value creation.

We know that FAMGA is accumulating for future wars. Business headlines have posted "Facebook's blockchain team recruiting chief traders" (Blue Fox notes: Facebook's stable currency is about to go online is also endless). Amazon announced that it will offer BaaS (blockchain as a service), and since Amazon registered a series of domain names related to cryptocurrencies, rumors about its currency have been rampant in the past year. Although Sergey Brin once admitted that "Google failed to stand at the forefront of blockchain technology," it subsequently released a blockchain solution on its own cloud platform.

FAMGA may have a nap, but they are already waking up. There must be a battle between them and the cryptocurrency community. The original force of the encryption world against FAMGA's "Death Star" is the community.

We are still at an early stage of understanding how to provide an effective incentive structure for different people in the community (ie, token economics). Although the work of many communities is focused on tokens, the state of the community is also a very powerful motivating factor and it is given free of charge. I also know that the community is building new tools to enhance the capabilities of the best projects, and to quickly attract and build a large-scale community.

With trillions of dollars being involved, the war will be epic. I hope the community is with you.