Messari has long focused on the changing trend of the crypto asset supply curve.

Over the past six months, we have spent a lot of time building a complete flow-supply curve for the top-ranked cryptographic assets. This work confirms our initial intuition: more precise methods and more scientific analysis methods are needed to define and classify asset supply types in order to conduct in-depth research on cryptographic assets.

We can classify and measure all aspects of supply:

Based on the definition of the above categories, let us look at the changes in monetary policy in the top 80 crypto assets.

Fair distribution: no pre-mining, mining starts from the blockchain. For example BTC, Monero and Dogecoin.

Instant mining or secret pre-excavation: The founder used asymmetrical advantages to exploit a large number of tokens at the time of issue, or did not announce the initial stage of the token, thereby secretly mining. For example Bytecoin and Steem.

Built-in central vault: The founding team/foundation receives ongoing mining awards to fund project development – ​​in the form of a certain percentage of block rewards or super blocks. It does not include decentralized financial funds such as Decred or Bitshares. Representative projects such as Zcash and Zcoin.

Public sales: Part of the initial supply is offered to investors through the acquisition of another cryptographic asset (usually ETH or BTC). For example, Tezos, Basic Attention Token, and Augur.

Airdrop: The initial partial supply is distributed to the community for free or as a small task. These tokens are usually thrown into the hands of token holders from large blockchains such as BTC to achieve a fair, decentralized and transparent distribution. Examples include Decred, Nano, and Ardor.

Centralized distribution: Some tokens may be airdropped, sold to private investors or distributed to partners, but the entire initial supply is centrally managed. For example XRP and Ontology.

Book Bifurcation: The owner of the original encrypted asset will prorate the new encrypted asset created in the hard fork. For example BCH and ETC. Sometimes, the fork contains an additional pre-mining or hidden mining to cover the cost of the fork and future development costs, and reward the team. For example, Bitcoin Gold and Bitcoin Diamond. 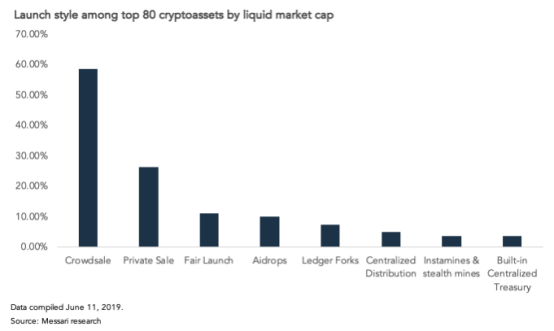 Of course, some of these assets may mix different types of offerings, such as private sales and sales to the public, public sales and airdrops, ledgers, and built-in treasury.

However, it is worth noting that only 1 / 10 of the top 80 encryption assets are "fairly launched." More than half of them sell tokens to investors through the public sales model.

Zcash's built-in central vault model is not widely used in the top 80 assets, but other projects like Veil have adopted a similar model, which is the percentage of super block rewards rather than block rewards. 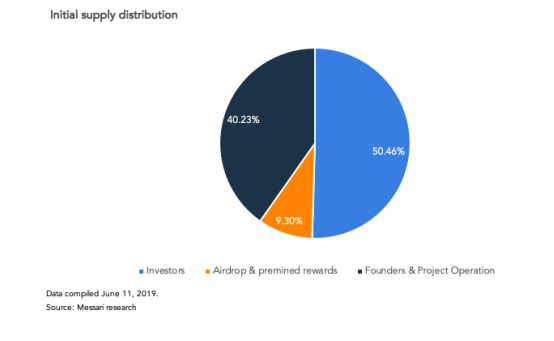 In addition to pure fair issuance of assets and book balances without pre-excavation or built-in vault models, almost all projects allocate some initial supply or continuous mining awards to the founding team and project operating funds.

On average, these projects even allocate up to 40% of the initial supply to the founder and project operating funds. Other parts of the distribution include investors (private sales and public sales), airdrops and pre-mining. The pre-mining reward is that the reward for mining or pledge has been pre-mined and allocated to the project operating funds to support the expenses. Waltonchain, GXChain and AElf all have this kind of pre-mining reward.

The continuation of the collateralized asset structure can be defined by the volatility (the absolute number of tokens generated) or the inflation rate (the percentage of supply growth). Fixed issuance: The number of tokens generated per period (block, day, year) remains the same. This has led to a decline in the inflation rate. Examples of fixed distribution strategies include Tron and Dogecoin.

Reducing inflation: Depending on the rate of decline in inflation, this may result in an increase, fixed or reduced circulation per period. For example, Steem's inflation rate drops by 0.5% per year until it reaches a permanent inflation rate of 0.95% per year, as well as Decentraland's continuous token model, although its inflation has not yet been activated.

Declining issuance: The number of tokens generated per period (block, day, year) decreases over time. This has led to an exponential decline in inflation. Declining is very common in the issuance of PoW tokens, which can be achieved by halving production or by continuously reducing block rewards. More than 75% of the deferred tokens are PoW tokens, and 80% of PoW tokens use a declining policy. For example, BTC, which is halved every four years, and Monero, are characterized by decreasing block rewards until the reward reaches 0.6 XMR in 2022, when Monero will eventually transition to a fixed permanent release (0.6 XMR per block).

Most tokens characterized by a fixed supply are non-native tokens that do not require newly generated tokens to motivate the miner or verifier to provide security to the network. 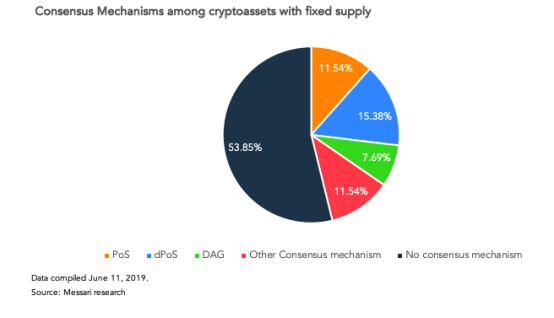 However, in some cases, even PoS and dPoS native tokens have a fixed supply.

In fact, there are other ways to motivate verification: transaction costs, pre-mining rewards, and secondary token issuance. Waves' rewards are denominated in another asset, Miners Reward Token (MRT), and participants also receive transaction fees. The Loom network rewards the PlasmaChain certifier by pre-mining tokens that allocate pools of reserve funds.

Non-procedural deflationary monetary policy: Non-procedural mechanisms such as quarterly destruction of the currency security make the remaining supply of tokens declining over time, and each quarter of the currency will destroy the equivalent BNB of 20% of profits until the remaining supply reaches 100 million BNB ( Half of the initial supply). The diluted supply of these tokens is really hard to predict. For BNB, our model relies on various assumptions (cost and revenue structure, previous destruction analysis, and future developments, etc.). By 2050, we estimate that token destruction will reach 600,000 BNB, and we apply similar relative deflation to each supply (coin, angel investors, and token crowdfunding participants).

Procedural deflationary monetary policy: Due to procedural mechanisms (destruction of fees, slashing penalties, and destruction of the value of the transfer), supply will decrease over time. BOMB tokens are such an interesting experiment:

To date, more than 27,000 BOMB tokens have been destroyed.

Destruction and casting balance: The underlying services that access the network will destroy tokens. Independent of the token destruction process, the agreement generates new tokens for each time period (block, day, year) and assigns these tokens to the service provider. The percentage of newly generated tokens assigned to a particular service provider is equal to the percentage of tokens that are destroyed for accessing their services. If 10% of the destroyed tokens are used to access a particular service provider, then the service provider will receive 10% of the new foundry token. Factom is the first protocol to introduce a model of destruction and casting balance.

Other combustion and casting models: There are different destruction and casting models. For example, the Maker supply is deflated (the MKR token is burned when the borrower pays the stabilization fee). So far, according to Maker Tools, as of November 14th, 4934 MKRs have been destroyed, the annual destruction rate = (unpaid DAI supply * stability fee) / MKR price, more than 7800 MKR (0.78% of the total) .

However, in the case of multi-collateralized Dai, a new MKR can be generated through a failed auction contract to make up for bad debts. In addition, some assets are likely to transition from inflation policy to deflationary policies. For example, ETH 2.0's pledge reward is likely to be lower than the transaction cost incurred, and EIP 1599 attempts to replace the cost model of the “first price auction” in Ethereum with a mechanism to adjust the basic network fee according to demand. The basic costs will be destroyed and the miners/pledges will only receive tips other than the basic fees. This will lead to deflation and supply generation slower than destruction.

Encrypted assets do not always maintain the same release type. As mentioned above, Monero will be adjusted to a fixed release policy in 2022. Zcash was issued by slowly launching mining activities, increasing circulation in the first 20,000 blocks (2 weeks) and then transitioning to a halving-based issuance declining process (half every 4 years). Ethereum will transition from a fixed issuance policy to a dynamic issuance, and scales proportionally based on the total equity of the network. In the end, it could even become a deflationary asset. Another important aspect of the crypto-asset monetary policy is whether there is a cap on the supply (maximum hard supply) or no cap (constant issue). In our example, 80% of the encrypted assets have a defined maximum supply. Although the BTC supply cap will not be reached until 2140, other inflation assets are already very close to their supply caps. For example, the 14 million BCD pre-mining by Bitcoin Diamond has greatly accelerated the transition to the minist's currency structure for transactional expenses, which should be achieved around August 2024. The main question is whether there are enough incentives for miners to continue to maintain the safety of the blockchain.

The current field of cryptographic assets is seriously lacking in the methodology of accurate valuation, paradox calculations. The supply of encrypted assets seen through the above indicators will provide investors with the most basic and important valuation methods.

Messari is demonstrating the supply framework on data products as quickly as possible. Over the next few months, we will present data on startup methods, initial offerings, release types, and supply caps on OCFX and asset profiles.