However, according to further research by CoinMetrics, the actual supply of Bitcoin is much lower than this data.

According to statistics, at least 1.6 million bitcoins may be permanently lost. In addition, the actual liquidity of Bitcoin (over 16.3 million) is much lower than it should be.

After delving into the bitcoin code, you can see that there are formulas that set limits on block rewards. These simple lines of code effectively set the bitcoin supply to 21 million BTC. 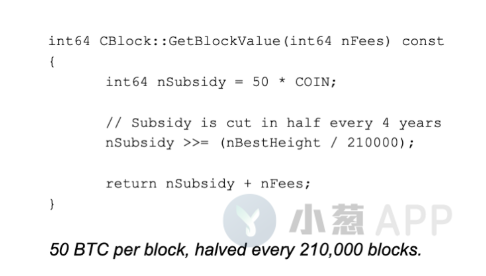 Of course, most investors know the total supply of Bitcoin. However, what more people don't know is that Bitcoin's code base does not review BTC supply limits of no more than 21 million, but software checks each block's requirements no more than the specified amount.

Take the 18 million bitcoin mining on October 19 as an example:

The birth of this bitcoin, known by the encrypted community, is a milestone in the end of the bitcoin inflation process. But savvy observers commented that Bitcoin's supply did not reach 18 million BTC when the block height reached 600,000. Bitcoin core developer Pieter Wuille mentioned that the actual supply of bitcoin at the block height of 600,002 was 17,999,854.82192702 BTC.

Today, we will delve into why bitcoin supply is lower than expected and explore how many bitcoins have been lost forever.

1. Bitcoin that can prove lost

The bitcoin ledger consists of a set of "unspent outputs" or "UTXO set". By summarizing the BTC values ​​of these outputs, you can get the bitcoin supply seen by the entire node.

The first block of Bitcoin contains a transaction that has produced 50 BTCs. However, the 50 BTC outputs of the transaction were not included in the UTXO set. It is not clear whether this is due to negligence or intentionality.

The direct result of this is that even if the 50 BTCs are visible in the transactions contained in the main chain, they will not appear in the bitcoin ledger.

This happened twice in the early history of Bitcoin:

Trading e3bf … b468 is the coinbase output of blocks 91, 722 and 91,880 In each case, when the second transaction occurs, its output will overwrite the previous output. This results in neither of the covered outputs being concentrated in the UTXO.

In other words, this 100 BTC is not in the book of Bitcoin.

To this end, the developer introduced BIP-30 in 2012 to prohibit the inclusion of new duplicate transactions before the output of the old transaction is fully used. However, the processing of existing duplicates has not changed and remains in the chain to this day.

In addition, the introduction of BIP-34 in the second half of 2012 also made it more difficult to replicate the coinbase transaction library.

3. Remuneration not received by miners

Another group can prove that the lost bitcoin is related to the coinbase transaction through full node verification.

The Bitcoin agreement stipulates that the miners in the effective block can receive the remuneration specified in the agreement and the transaction fees contained in the block. Each node checks whether the miner is trying to claim compensation beyond the allowable range. However, it is worth noting that the entire node does not care whether the amount received by the miners is lower than the amount it deserves.

Obviously, asking for less than what they should receive is not a rational act of the miners, but this happens quite often.

The table below lists the most notable cases: 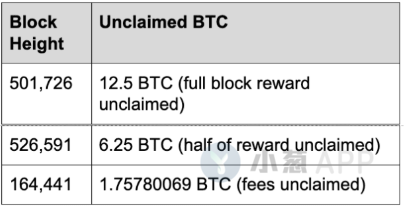 Overall, this behavior occurred in 3 different events, with a total of 1,221 anomalies. The chart below shows the number of blocks that have not applied for full compensation:

According to Bitcointalk user midnightmagic, the original intention of Bitcoin developer Matt Corallo was to pay tribute to Nakamoto.

Although most of these outputs are created with a value of 0 satoshis, some output is not. As of block 600,000, there are already 3.723039 BTCs sent to the OP_RETURN output, making it permanently unusable and not part of the bitcoin supply.

In general, we can calculate the actual supply of bitcoin at a block height of 600,000 by subtracting 18 million bitcoins from the bitcoin that can be proved to have been lost. In addition, there are cases where the actual supply of bitcoin bitcoin (more than 16.4 million pieces) is lower than it should be.

There is no easy and provable way to destroy Bitcoin before the OP_RETURN output is standardized. As a result, some users use a "false address (pseudo address)", that is, an address without a known private key.

We have listed some notable fake addresses:

However, in theory, these bitcoins will not be lost forever. Someone can find the private key for it. However, the only known way to find the private key through only one address is to randomly guess until the correct combination is found. In fact, the possibility of this happening is extremely small.

There are some key sections of code that will be responsible for drafting, signing, and broadcasting our transactions to the Bitcoin network. Today, we rarely find some destructive errors in it, but this is not always the case.

In November 2011, MtGox encountered a vulnerability in its wallet software, sending 2,609,363,043,419 BTCs to fake scripts, and then did not know how to spend it. The fake script is like if you are trying to send money to an "empty" public key, and the software is not programmed to detect it. This is not advisable.

As we all know, another example of losing Bitcoin is the currency that has not been moved for years. We have no way of knowing if the asset owner still has a password.

As of the 600,000 blocks, there were 1,496,907.88,000 bitcoins in the last mobile bitcoin before July 2010. According to various estimates, Nakamoto has more than half of these coins (because it was the main miner in the early history of Bitcoin).

Overall, these zombie coins have rarely moved since the bull market in 2013. Considering that the price of stolen bitcoin has experienced a skyrocketing situation, it can be concluded that the owners of these bitcoins are either long-term Holders or they cannot obtain them at all.

4. Bitcoin that will not be circulated for the time being

The last category may be considered to be lost, or at least temporarily not circulating, bitcoin (known stolen bitcoin).

There have been many major hacking and theft incidents in the history of Bitcoin. Bitcoin in two cases of theft was considered to be no longer in circulation.

In March 2011, hackers stole 79,956 BTCs from MtGox wallets, which have not yet been touched. As of today, it is the address of the sixth richest.

In the history of Bitcoin, there have been many major hacking and theft incidents, and two of them have been considered “non-circulating” events. In 2011, MtGox’s stolen 80,000 BTCs and the 2016 Bitfinex were stolen. The 120,000 BTC.

In March 2011, hackers stole 79,956 BTC from MtGox's wallet. These bitcoins have not moved so far (the hacker is most likely to be unable to access the private key). As a result, the address ranks sixth in the Bitcoin Rich List.

We depict the supply of bitcoin up to 600,000 blocks from three perspectives. 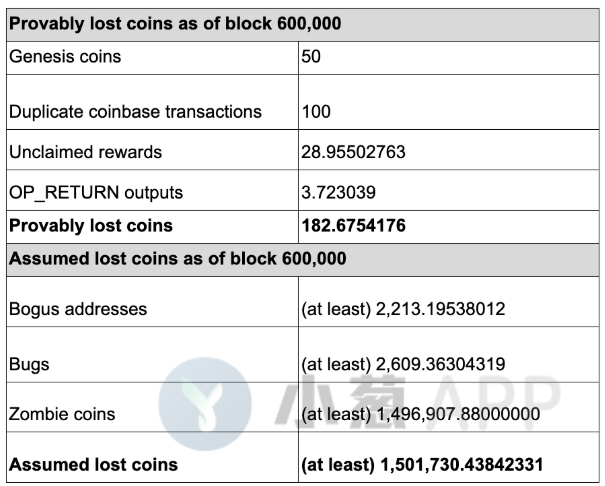 1. Bitcoin's Supply: The correct value of bitcoin supply on Bitcoin technology (except for bitcoin that can prove lost);

2.Allive Supply: A supply other than Bitcoin that can prove lost and assumed to be lost;

3.Liquid Supply: A supply other than stolen, bitcoin that can prove to be lost and assumed to be lost. The calculation results are shown in the figure below:

Although the report calculates the most conservative estimate of the number of bitcoin losses. But it still shows that bitcoin is getting scarcer. At present, there are only less than 3 million bitcoins left in Bitcoin for mining. And can scarcity really stimulate the price of bitcoin? let us wait and see.

The full text has been deleted and changed. Please indicate the source.

The “blockchain” has become the new “painting skin” of deception, and these words are all routines!

MoneyGram CEO: The company is working to optimize and improve the use of XRP as a cross-border transfer engine