The sudden wave of the market is unpredictable, and bitcoin, such as the same kind of strong heart, has made the whole market start to get excited.

Today, according to CoinmarketCap data, Bitcoin has ushered in a surge, rising above the $5,000 mark, the highest since November last year. 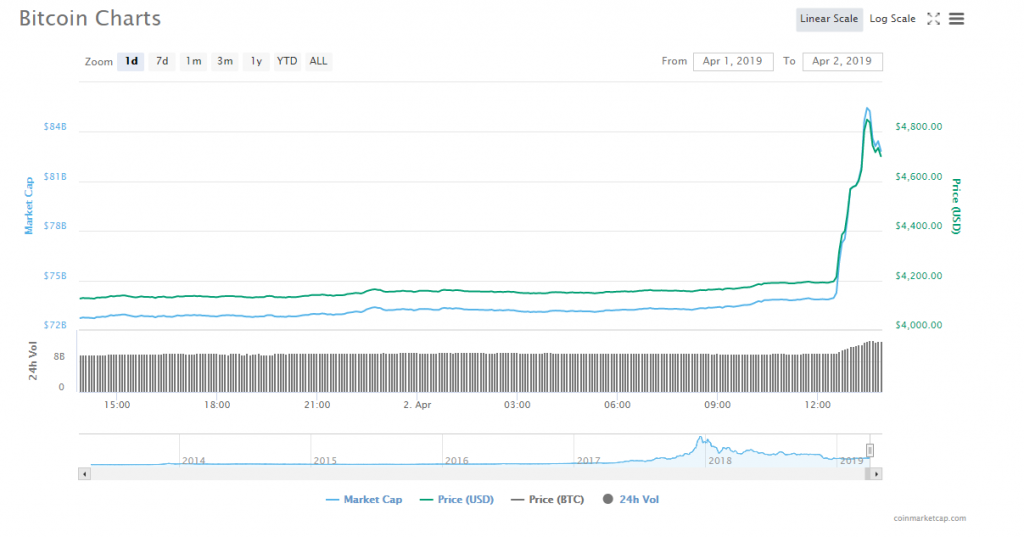 Surging out of thin air?

Affected by the hot bit market of Bitcoin, the currency security, fire coins and OKex exchanges all experienced short-term congestion and even downtime. At the same time, the topic of "bitcoin rose" was once hot search.

In response, cryptocurrency analyst Joseph Young explained on Twitter that "the rebound in Bitcoin today is only a technical increase. If it breaks through $4,200, bitcoin will start to soar. According to Bleeding_Crypto's guess, some people will pay $4,200. The price has sold $80 million in bitcoin. I am curious as to where this will lead the cryptocurrency market."

Jehan Chu, managing partner of blockchain investment and consulting firm Kenetic Capital, said, “Overall, digital currency markets such as Bitcoin are still small and vulnerable to mood swings relative to other markets. I think today is Nothing special, this is only temporary."

"The overall market is on fire, the big currency and the big platform coins will go up, and the small currency will be active! The fire of the stars can be ruined!" At the same time, Li Shubing, CFO of the Fire Coin Group, said on social media.

In addition, DGroup founder Zhao Dong said on Weibo that there will be a good rebound in the market, but be wary: the rebound is not a bull market. Because there is now a game of funds in the field of memory, there is no incremental funding. There is no need to care about the long-term holding of the currency, two years after the big bull market (summer).

In fact, many people are puzzled by this wave of market. OKEx CEO Jay Hao said on Weibo, “I have been asking me, “Bitcoin has gone up” Is the main force of this wave market launched on OKEx? Friends, I really don’t know, but it is said to be the first Quickstart on OKEx."

Zhao Changpeng, the founder of the currency, also expressed the same view. "Who knows any news? I have been asked several times, but to be honest I know nothing."

Today, a news report that the US Securities and Exchange Commission (SEC) announced the approval of the listing of two bitcoin exchange-traded funds (ETFs) has been widely recognized as an important factor in the strong rebound.

However, the SEC has made a postponed decision on the Bitcoin ETF proposal. In the SEC's view, bitcoin prices are volatile, easy to manipulate, and difficult to monitor effectively. However, in the past, the SEC's tough attitude is no longer as strong as it used to be. Committee members even said that the Bitcoin ETF will be approved sooner or later. From this point of view, perhaps in the near future, cryptocurrency will take a big step toward the mainstream.

It is worth mentioning that the US Congress recently introduced a new cryptocurrency bill: the Virtual Money Consumer Protection Act and the Virtual Money Market Regulatory Competition Act, which aims to address the manipulation of virtual currency prices and enhance US competition in this area. force. Once the proposal is approved, it will help the Bitcoin ETF to be approved.

However, some people think that the rise of Bitcoin has nothing to do with the Bitcoin ETF. The reason is that from the continuous upswing of the blockchain sector in recent days, large funds have already entered the market. This is an organized and premeditated pull. .

In fact, according to the zero-aware blockchain, the concept of blockchain has continued to open on the two days. Easy-seeing shares, Anne shares, Chenxin Technology, Sifang Jingchuang, Hualian, and Yingyin shares have been trading daily. The daily volume is also significant, which means that the underlying technology blockchain of cryptocurrency is constantly being recognized.

Perhaps one day, the era of encryption that belongs to everyone will come.