“In the cryptocurrency 500 competition, you can look at the most exploited tokens using the proof of work, because these are the only supercomputer-like workloads in the cryptocurrency world. The cost of other consensus algorithms is much lower, just like The market has been proving that their cryptocurrency value and security are much lower. This is a balance between value storage and utility attributes." The hash in cryptocurrency mining is a measure of parallelism with triggers in the supercomputing world.

Workload proves a balance between safety and value

The miners compete through the workload proof consensus algorithm, submitting a set of transactions to the blockchain and winning block rewards. Encrypted currency mining through workload proofing continues to represent the most effective consensus algorithm category, with a decentralized approach that maximizes security and makes tokens a valuable carrier.

In the cryptocurrency 500 competition, you can view the most exploited tokens using the proof of workload, as these are the only supercomputer-like workloads in the cryptocurrency world. The cost of other consensus algorithms is much lower, as the market has always proven, their cryptocurrency value and security are much lower. This is a balance between value storage and utility properties.

Increase in computing power and difficulty

The mining industry entered the era of mega-megawatts in 2016. Three years ago, the global bitcoin hash rate has exceeded 1EH/sec. Now, Bitcoin's total computing power is close to 100 EH per second, which is 10 billion hashes per second. (To date, the average of seven days is 95 EH / sec.) Encrypted hashing is a very simple calculation. In the case of bitcoin hashing, using SHA(256) requires multiple iterations until it meets the predefined The difficulty of winning the problem.

When the overall hash rate increases or decreases, the consensus algorithm periodically adjusts the difficulty of the problem. Bitcoin made 300 such adjustments to the data in about two weeks.

Table 1 shows the bitcoin hash rate history for every half of the block year starting from the two-week age of Bitcoin. Each block has 52,500 blocks per year and lasts for about 10 minutes, while the block year runs slightly shorter than the regular calendar year, with the most recent statistics being about two weeks. Since the launch of Bitcoin's blockchain in January 2009, we are now in the second half of the 12th block year. The hash rate is displayed in the form of TH per second, 1000 TH is 1 PH, and 1 million TH is 1 EH. 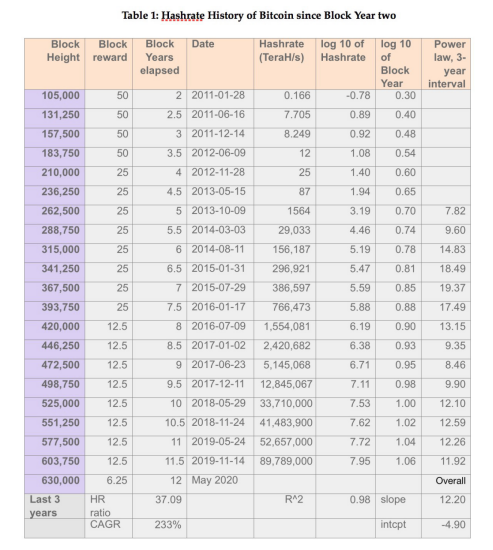 In the table, the first column shows the block height (number of blocks), and then the next column shows the block reward. The halving of annual incentives for every four blocks is a key halving event that reduces inflation to zero. Show calendar date, then in the next column, the total hash rate for all miners worldwide. Get the base 10 logarithm of the hash rate and the logarithm of the past block year. In the last column of the table, you can see the 3-year previous interval slope of the log-log regression (power-law relationship) between the hash rate and the block year.

Two exponential relationships: HR = c * exp(a * Byr) where HR is the hash rate, Byr is the number of years passed, a and c are parameters, and the power law relationship is: log HR = c + a * log Byr.

The exponential relationship has stabilized in recent years, but in the past nine years, the power law has remained in good shape for eight orders of magnitude. The hash rate grows at a very fast rate, about 12 times the time! With the rapid transition from GPU to ASIC, the hash rate increased with the power law > 15 for a period of 2014-2015. It has now stabilized and is growing much faster than Moore's Law.

On the other hand, due to increased security and scarcity (as bitcoin inflation continues to decline, especially at every halving), with the fifth power of the past block time, bitcoin Prices have risen rapidly. Miners were motivated to increase the number of systems dedicated to mining to get the latest, most powerful hardware, increasing capital investment, so the hash rate followed the price increase. The result is that the increase in the hash value is greater than the square of the bitcoin price.

As shown in Table 1, in the last three calendar years, the bitcoin hash rate increased by 37 times, and the compound (calendar year) annual growth rate was 233%. This means doubling every seven months, or more than three times faster than Moore's Law.

In the face of difficulties, the choice of miners

Mining inputs include equipment costs, maintenance costs, manpower, electricity, and the expected price of Bitcoin or other cryptocurrencies over the life of the equipment; various studies have shown that typical capital expenditures are 1:1 more than operating expenses.

Since the main equipment cycle is about two years, miners must predict the cost and future bitcoin prices several years in advance to justify the new capital investment. If the price drops, they can turn off the least efficient equipment (close to or less than the shutdown price) and only use the updated equipment with the best per kilowatt hash value for mining. There may also be seasonal effects, and many miners are located in areas where hydropower is cheaper and have lower water costs. If some miners turn off certain equipment, more efficient miners will increase their share of Bitcoin rewards because mining will be less difficult.

Capital expenditures are sunk costs, so miners will continue to mine if prices fall, as long as they can get positive cash flow after deducting operating expenses (but if cash is scarce, they may have to postpone equipment upgrades). They can also hedge their expected future production by using bitcoin options or forward sales of futures.

This fast-growing global hash rate is based on an architecturally optimized ASIC computer design dedicated to mining, performance, packaging and efficiency, and the results of the huge advances made by the mine in finding the lowest cost location. Power and cooling, and optimize its facility design. Of course, the result is a long-term long-term sharp rise in bitcoin prices. Since the beginning of 2011, prices have risen more than 1,000 times.

Reprint, please keep the copyright information, thank you for reading. 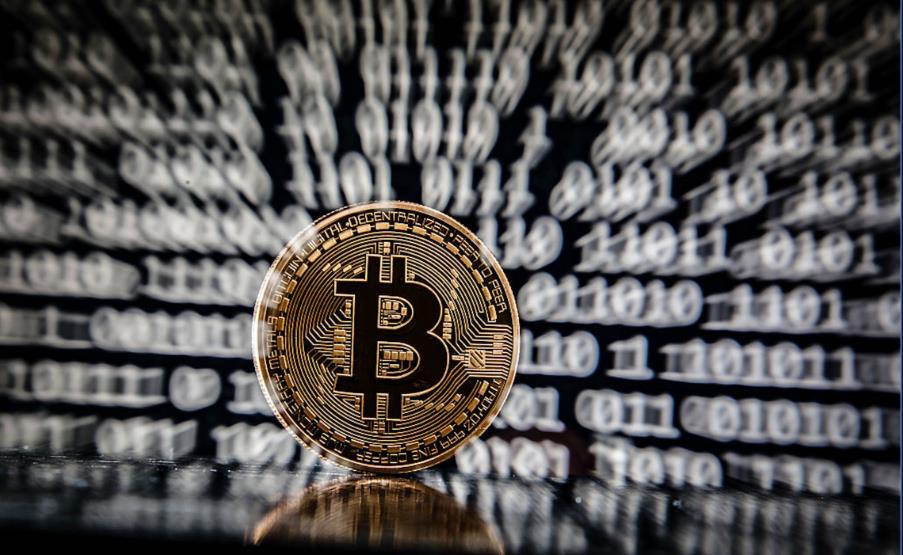