At present, the EOS CPU congestion index reaches 100%, the EOS network has entered saturation and the congestion has been going on for nearly three weeks. 87% of the CPUs are in an occupied state, and only 13% of the available CPUs are available. According to the IMEOS report, as of November 19, the total CPU consumption of the entire network was 11,353,236ms, which caused the DApp EIDOS of the EOS network to consume 82.93% of the entire network.

On November 1st, EIDOS tokens were airdropped on EOS to attract a large number of wool parties. The peak number of active users of the DApp reached 4,730, which is currently down to 1,580. It is reported that the airdrop will last for 15 months. As far as the current situation is concerned, the EOS network will remain congested. Most EOS users are still in a state where they are unable to trade, and need to use a third-party account to help with the mortgage, to suspend the status of the account "catch".

Previously, the financial network-chain financial mentioned that the EOS system mainly contains three kinds of resources, namely network bandwidth resources (NET), CPU computing resources (CPU), and running memory resources (RAM). Among them, the CPU is one of the resources consumed by the user when making a transfer or transaction. The network bandwidth resource (NET) is used to synchronize and transmit a transaction. When the user sends a transaction message, the block producer needs to package the transaction to generate a block, and then synchronize the block to other producers through the network. This process requires a certain amount of NET. Running memory resources (RAM) is used to record and store information, including user account information and smart contract execution information.

According to EOS Titan data, after the launch of the EIDOS airdrop on November 1, the CPU cost is 0.41ms/EOS, and the CPU cost is 0.1ms/EOS from November 7th to November 18th. The current cost price is 0.09ms/EOS. . In the EOS network, when the number of EOSs used to exchange CPU resources suddenly increases, the available CPU resources corresponding to one EOS are reduced. CPU usage fluctuates between 20% and 36%. 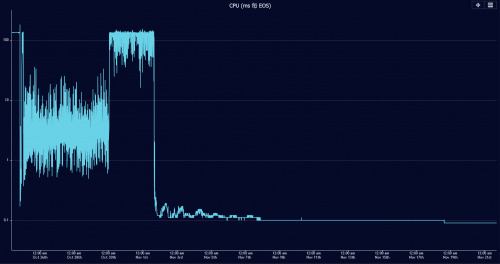 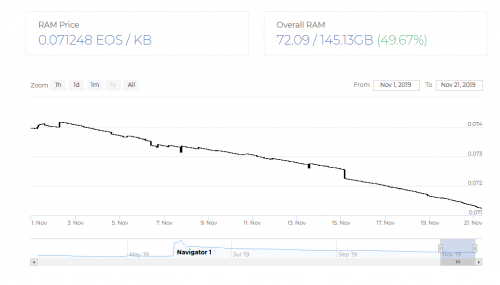 According to CoinmarketCap data, EOS is currently priced at $3, and on November 1, the price was $3.25, a 24-hour drop of nearly 4%, and a market capitalization of about $2 billion.