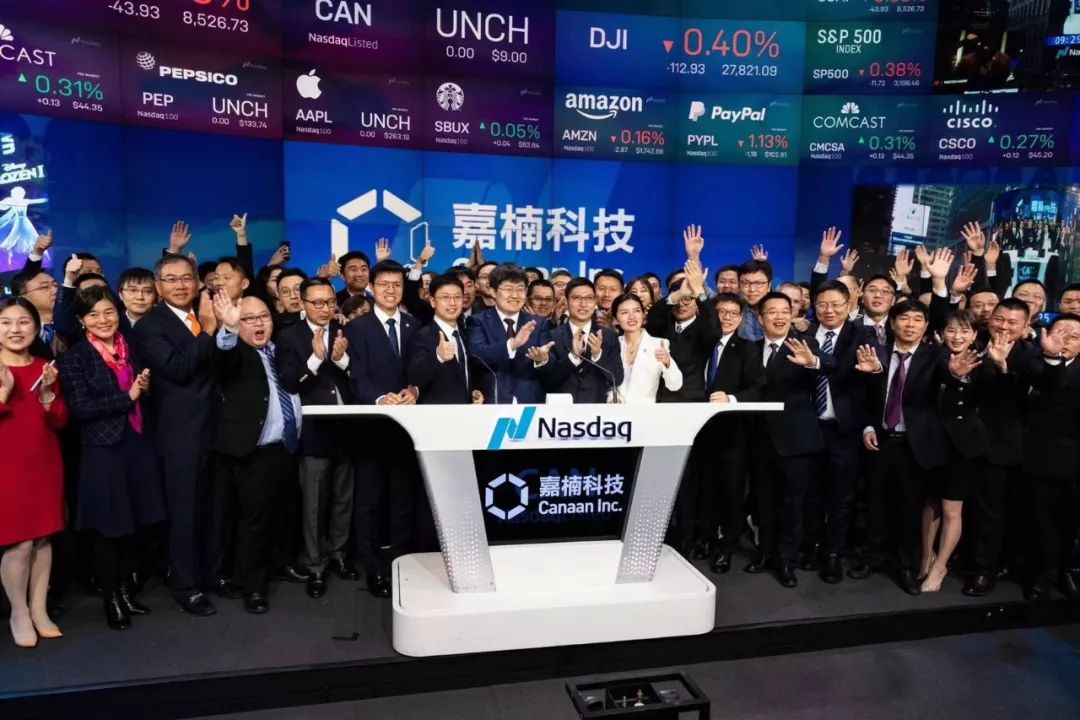 This listing means that Jianan has become the first IPO of China's independent intellectual property artificial intelligence chip companies to the US, and is also the first block of the global blockchain.

Jia Nan said that the proceeds from the fundraising will be mainly used in the following five aspects: 1. Strengthening the company's leading position in supercomputing solutions and enhancing the competitiveness of blockchain and AI products; 2. Continue to invest in Energy-efficient chip design; 3. Continue to introduce new AI products; 4. Launch AI Saas platform; 5. Continue to expand overseas business.

According to the prospectus, Jia Nan Chairman and CEO Zhang Nanxuan and his team invented and delivered the first cryptocurrency mining machines using ASIC technology as early as January 2013, which will further develop the research and development of AI chips. Laid a solid foundation.

According to public information, in 2011, Zhang Nanyu, who was still reading at Beihang University, first contacted Bitcoin. After a night of research, he thought that 1% of Bitcoin could change the world, and designed two FPGA mining machines. In January 2013, the world's first ASIC mining machine was made, leading the industry into the ASIC era.

Jia Nan emphasized in the prospectus that the company has been focusing on technology development, design and research, and is committed to the long-term development of the blockchain and AI industries.

In 2016, Jia Nan broke through 16nm in the chip process, and was also the first company in China to produce 16nm chips. This also promoted Zhang Nanxuan and his team to start the development of edge-side AI chips.

In Zhang Nanxuan's view, whether it is a blockchain or an AI chip, the entire entrepreneurial process has always focused on doing things related to computing. "One has improved the efficiency of social operations, and one has changed people's lives. The ultimate goal is to It is through intelligent computing to improve people's lives."

At present, Jianan has more than 300 employees, with an average age of 32. Among them, the R&D team consists of 127 people, and more than 65% of the members have more than 7 years of experience. Jia Nan also emphasized in the prospectus that the company's core R&D team worked with the founding team for more than four years.

The high-tech capabilities and stability of the founding team and the R&D team also brought considerable development results. As of September 30, 2019, Jia Nan registered 69 patents in China, including 6 inventions, 50 utility model patents and 13 design patents. In the same period, Jia Nan has registered 81 software copyrights and 30 IC layout designs in China.

Jia Nan mentioned in the prospectus that he has mastered the entire IC design process and has large-scale chip mass production experience. He has completed seven kinds of tapes for 28nm, 16nm and 7nm ASICs with a success rate of 100%. In 2017, a total of more than 150 million ASICs were produced in 2018 and six months ended September 30, 2019.

Since the beginning of 2015, Jianan has established a partnership with TSMC, a world-renowned IC manufacturer, and was selected by TSMC as one of the first partners of 7nm ASIC. The company also works with ASE, STATSChipPac and SPIL, one of the world's largest providers of IC packaging and test services, providing IC packaging and testing services.

In September 2018, Jia Nan became the first company in the industry to deliver commercial edge smart chips based on RISC-V architecture and self-developed neural network accelerators. The company's first generation of artificial intelligence chip, the KIT K210, has two functions: machine vision and machine hearing. It can seamlessly integrate different algorithms to handle various application scenarios, including smart home, smart energy consumption, smart retail and smart driving. It is widely regarded as a milestone in the development of hardware in the field of artificial intelligence edge computing.

According to public information, Jianan has already reached cooperation with upstream and downstream enterprises in Baidu and Softcom Smart. As an important member of Baidu AI hardware ecology, Jia Nan provides Baidu's customized development module PaddlePi-K210 based on Kanji K210, and opens the PaddlePaddle model device-side deployment solution. Specifically, developers do not need hardware changes. The public version of the mold can always be in the sample stage.

In the cooperation with iSoftStone, the non-inductive access control system developed by Jianan has been deployed to the iSoftStone headquarters building, which can identify and verify the identity of nearly 50,000 people per day.

In addition to the above cooperation cases, Jianan's first generation of artificial intelligence chip "Guizhi K210" has also covered intelligent buildings, smart homes, smart energy consumption and intelligent agriculture and forestry, and with the world's largest cloud computing vendor Amazon AWS Cooperation, through the network that meets the requirements built on the cloud in a few minutes, makes the company more focused on the business itself, which makes Jianan the first enterprise in China to realize the cloud on the IC.

It is worth noting that the relevant departments have issued a series of policies on blockchain and artificial intelligence, hoping to use the blockchain as an important breakthrough for independent innovation of core technologies, and accelerate the development of blockchain technology and industrial innovation.

In addition, the “Guiding Opinions on Accelerating the Cultivation of a New Mode of Shared Manufacturing and Promoting the High-Quality Development of Manufacturing Industry” issued by the Ministry of Industry and Information Technology on October 29 also proposed to promote the construction of new infrastructure. Strengthen the construction of new infrastructure such as 5G, artificial intelligence, industrial Internet, and Internet of Things, expand the coverage of high-speed, large-capacity, and low-latency networks, and encourage manufacturing enterprises to realize the interconnection of people, machines, and objects through internal network transformation and upgrade. Provide information network support.

Therefore, for Jianan, whether it can achieve more breakthroughs in ASIC performance will also help it further realize the integration and innovation of blockchain and AI.

For the future plan, Zhang Nanzhen believes that 2019 is a key node of Jianan, not only because Jianan successfully completed the listing, but also because the gradual popularization of 5G will directly lead to large connection, low latency and low power application scenarios. The outbreak.

“Jia Nan, as a company focusing on the edge-side AI market, hopes to provide equipment with local computing power through smart chips, and provide computing services for more corporate customers.”

In Zhang Nanxuan's vision, the reason for choosing R&D of edge-side AI chips is based on two opportunities:

From a technical point of view, AI has revolutionized the traditional computing architecture. Nowadays, popular GPUs and FPGAs are not completely designed for AI. At present, the specialization of AI chips has become a trend, which is the opportunity of Jia Nan, and it is also an important reason for Jia Nan to develop ASIC computing equipment from the beginning.

In short, with the injection of more capital, the rapid development of 5G technology, the increase of application scenarios, and the support of government policies, the AI ​​field has become the most concerned and fastest growing vertical industry in recent years. Nurturing huge market potential and opportunities.

Zhang Nanxuan said that after Jianan successfully landed on Nasdaq this time, he hoped to use the ever-improving super-power as the productivity of the company, provide customers with AI competitiveness, and help customers realize their self-worth in the intelligent world. "No matter which company, its ultimate goal is to create value and provide good service for users." Zhang Nanxuan said.

Xu Lijuan of China Software Evaluation Center: The application of cryptography has promoted the development of new technology industries such as blockchain

Coin An Zhao Changpeng: The coin security server has been restored

V God: I hope that the registration of Ethereum can be standardized

Cardano founder: Will not participate in lunch with Buffett, Cardano is not a scam