Editor's Note: The original title is "Reading the US Cryptographic Industry"

Foreword: The United States is one of the fastest growing countries in blockchain technology and one of the most important in the encryption industry. From the perspective of ordinary users, to what extent does the user adoption of the US encryption industry develop? Which states are developing faster? What is the motivation for ordinary people to participate in bitcoin or cryptocurrency? How do the laws of the US states deal with the development of cryptocurrency and blockchain technology? This article can give you a rough overview. The author of this article is coinbase, translated by the "TK" of the "Blue Fox Notes" community.

Let's take a look at the key status of the US encryption industry:

If you want to know how much Americans are interested in a topic, there is nothing better than Kim Kardashian's benchmark. Kim Kardashian’s social network advantage makes her a large part of our collective consciousness. Since the beginning of this year, one of the few ideas that has caused us more attention is Bitcoin. (Blue Fox Note: "We" mainly refers to Americans in this article)

On average, Google users in the United States search for "bitcoin" more frequently than they search for Kim Kardashian, and the number is on the rise.

In late June of this year, as prices rose, Google’s search for “bitcoin” was three times higher than the search for “Kardashian”. Not just a reality show star. Last year, Americans entered "bitcoin" on Google more often than headlines such as "royal weddings" and "election results."

In other words, Bitcoin is moving into the mainstream in the US – although Bitcoin has only a decade of history (it was born in January), it captures the imagination and attention of Americans. The following is a report on Americans' perceptions and adoption of cryptocurrencies, such as which state in the United States has the highest participation rate and the highest level of enthusiasm. This report is based on the integration of YouGov's report by coinbase and the macro-level data of coinbase's own user activities, which are reported in an anonymous and aggregated format.

We have also studied a growing number of states whose legislative bodies have developed active regulations for cryptocurrencies and blockchains to address local needs and interest in the technology.

Finally, by communicating with local customers of coinbase (these customers have different ages and occupations, from different regions) to find out who is interested in cryptocurrencies in which regions.

When given a list of available cryptocurrencies, research shows that 58% of Americans have heard of bitcoin. People have expressed various reasons for participating in Bitcoin, some are eager to increase the diversity of their portfolios, and some have a deep understanding of the potential of security and decentralized currency paradigm shifts. 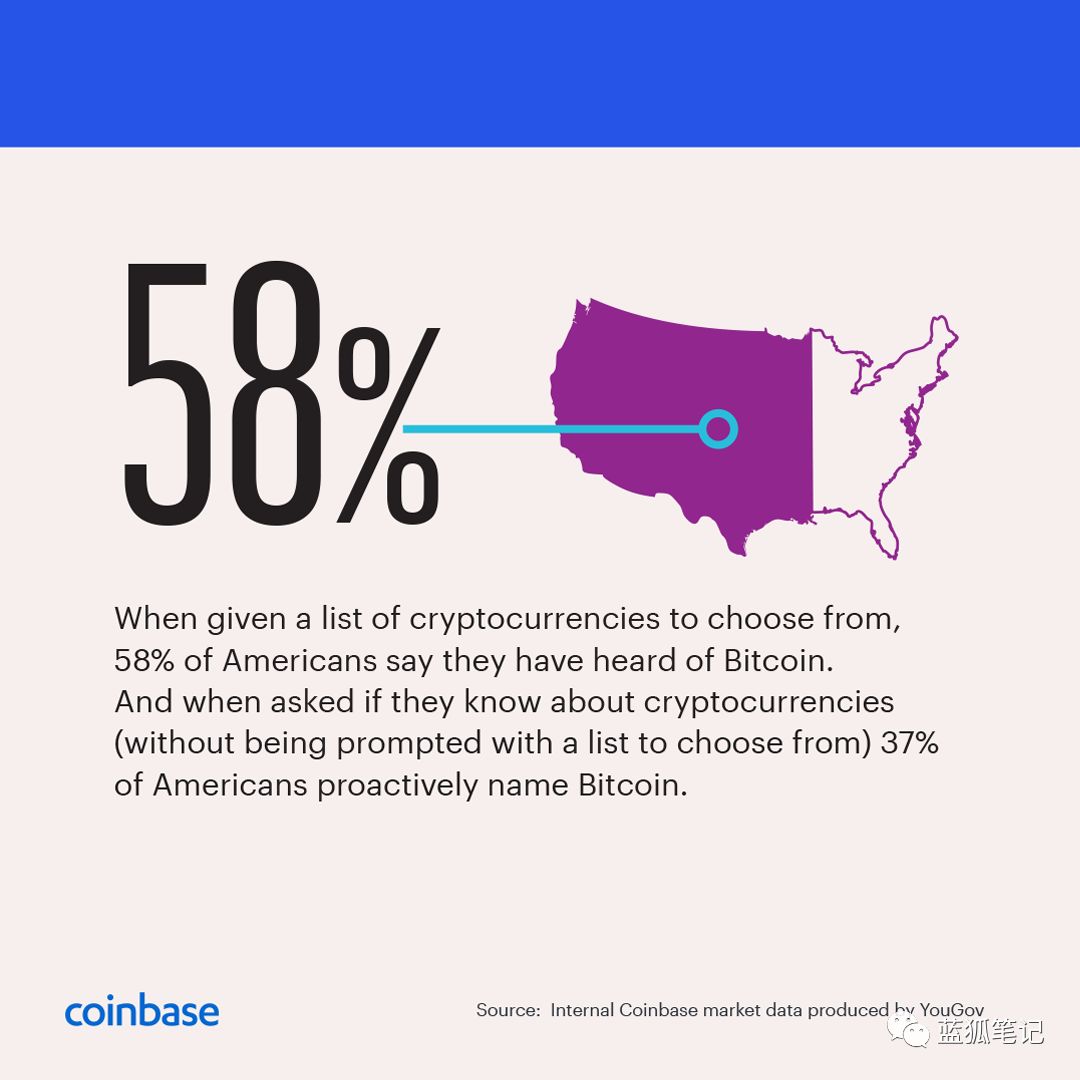 “For me, the most attractive aspect of cryptocurrency and bitcoin is that it is a world currency idea that can be transferred across borders without regard to exchange rates or high transfer fees or longer delays.” Christopher, a 26-year-old small business owner in New Jersey, said.

"If I move to another country someday in the future? My cryptocurrency will automatically accompany me. I don't think it's getting rich through Bitcoin. I just really believe in cryptocurrency and hope that this technology will succeed." 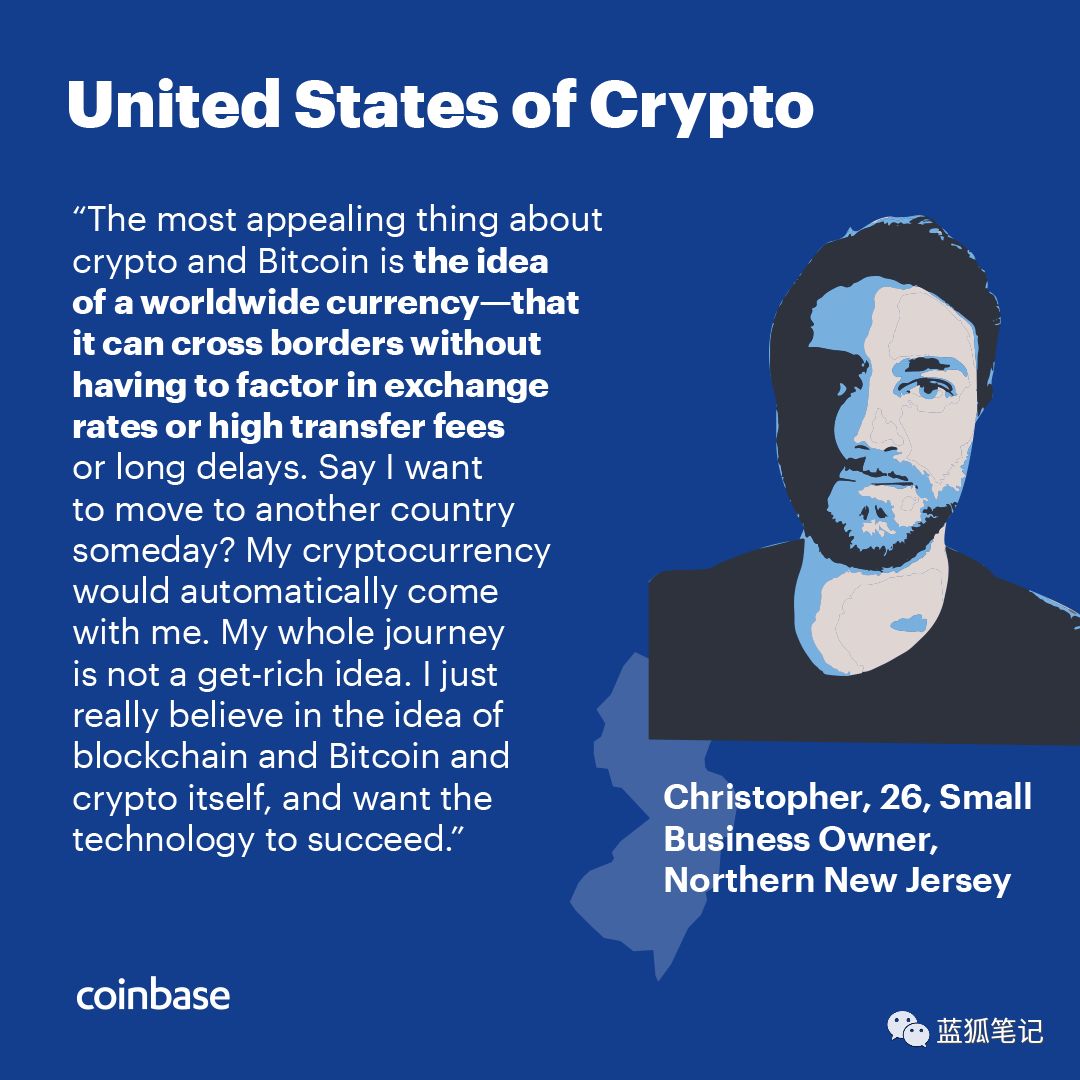 Encryption industry, from one state to another

In the United States, 37% of Americans, when there is no cryptographic currency list option prompt, will refer to Bitcoin when answering inquiries about cryptocurrency. 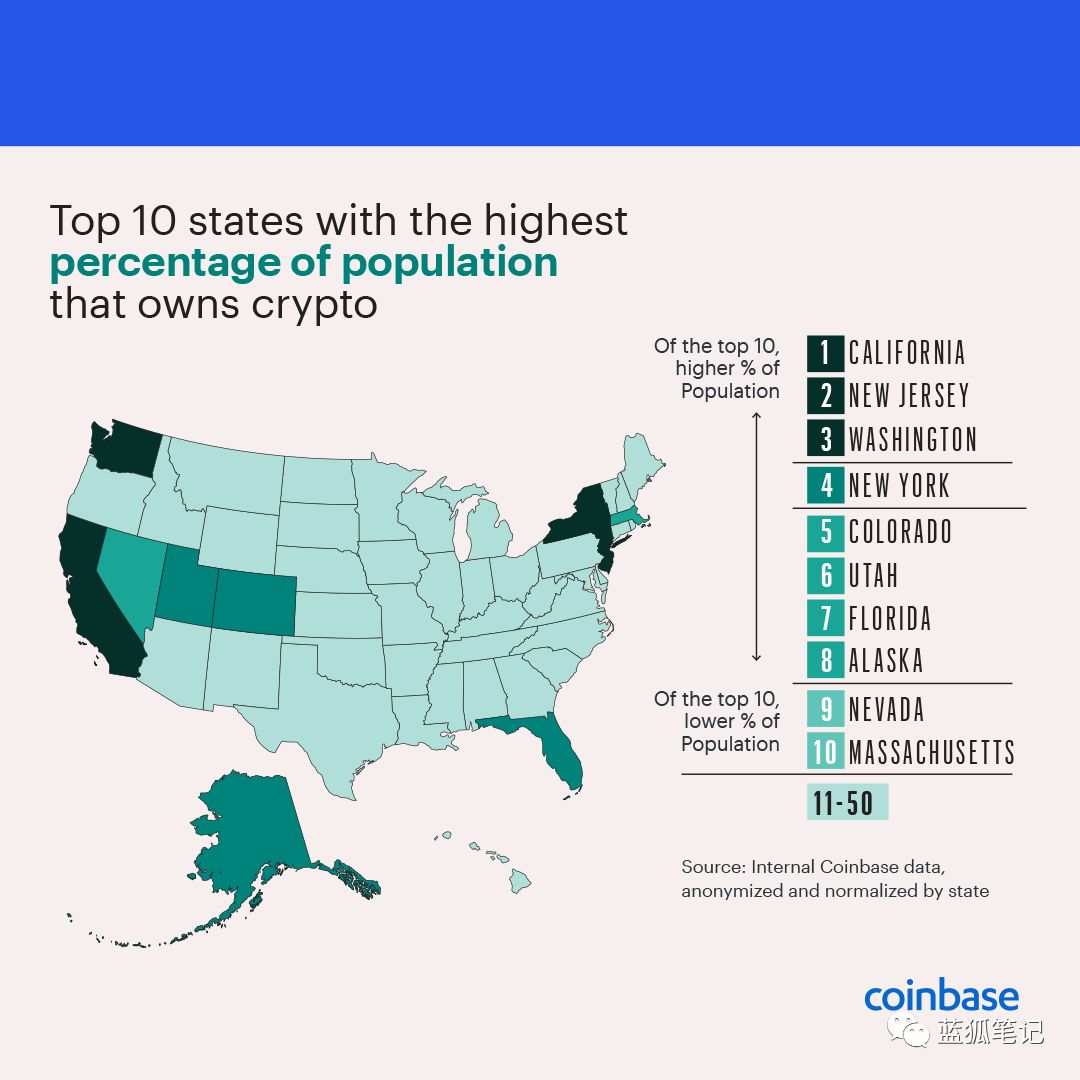 In some states, the proportion of this number has increased dramatically. In Wisconsin and Utah, 57% of respondents can speak Bitcoin without the help of prompts. Followed by Colorado, Massachusetts, and Wyoming. Even the fact that there is still some low awareness of Bitcoin is a chance for some people currently involved.

Todd, a 49-year-old IT director from Northern Virginia, said:

“Cryptographic and artificial intelligence and nanotechnology are cutting-edge technologies that can change our way of life. Many ordinary people have rarely heard of them.” 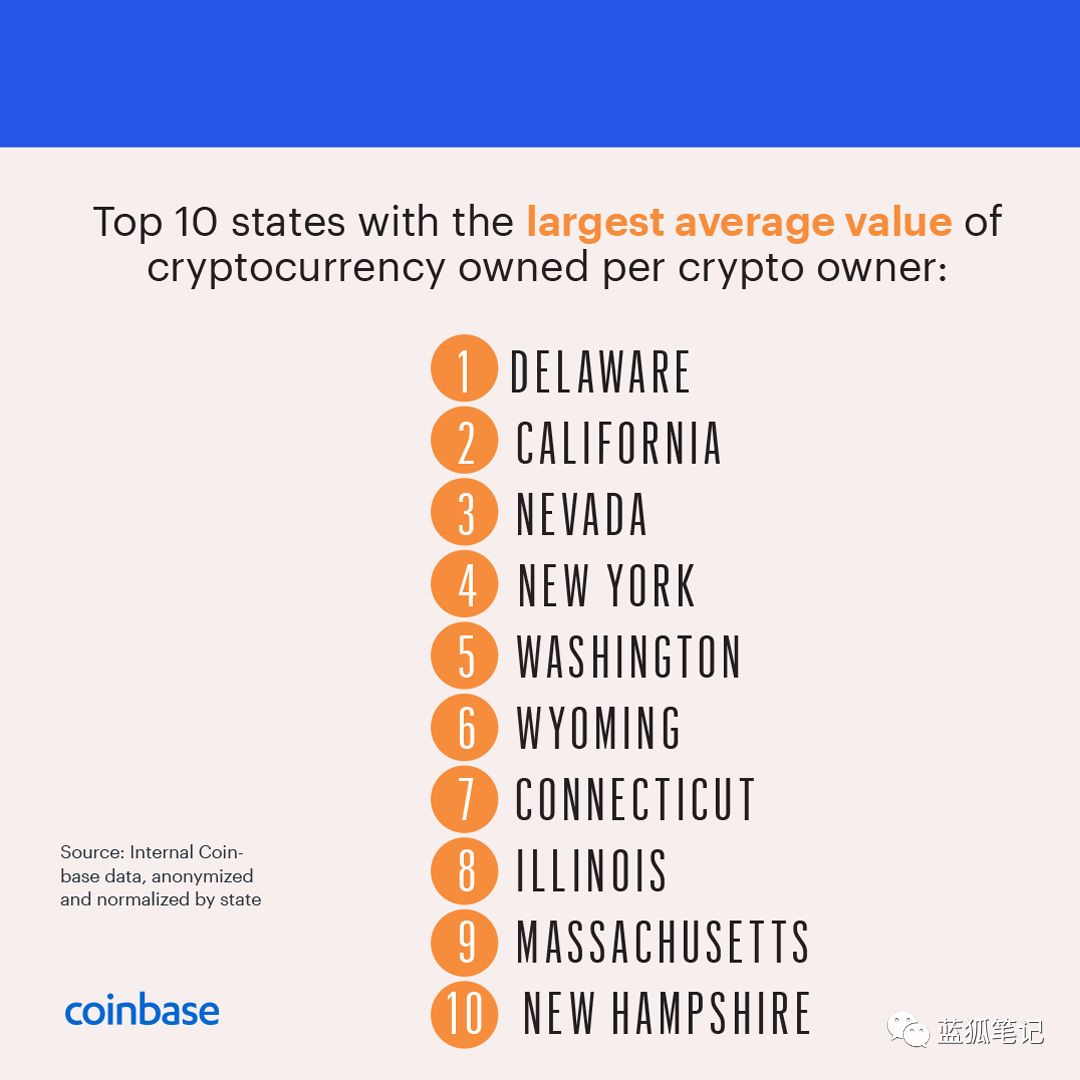 Some states with the highest percentage of cryptocurrency owners, such as California, New York, and Washington, also have the largest per capita holdings, which means that not only do many of these states hold cryptocurrencies, but they also hold Bigger. Interestingly, there are some categories, including those with a lower proportion of people with cryptocurrencies but higher per capita holdings, which means that a small number of people in these states hold more cryptocurrencies than each. Average holdings. After population adjustment, the most populous states of this type are Delaware, Nevada, and Wyoming.

What is driving demand?

For some people, cryptocurrency investment opportunities are their main driver. 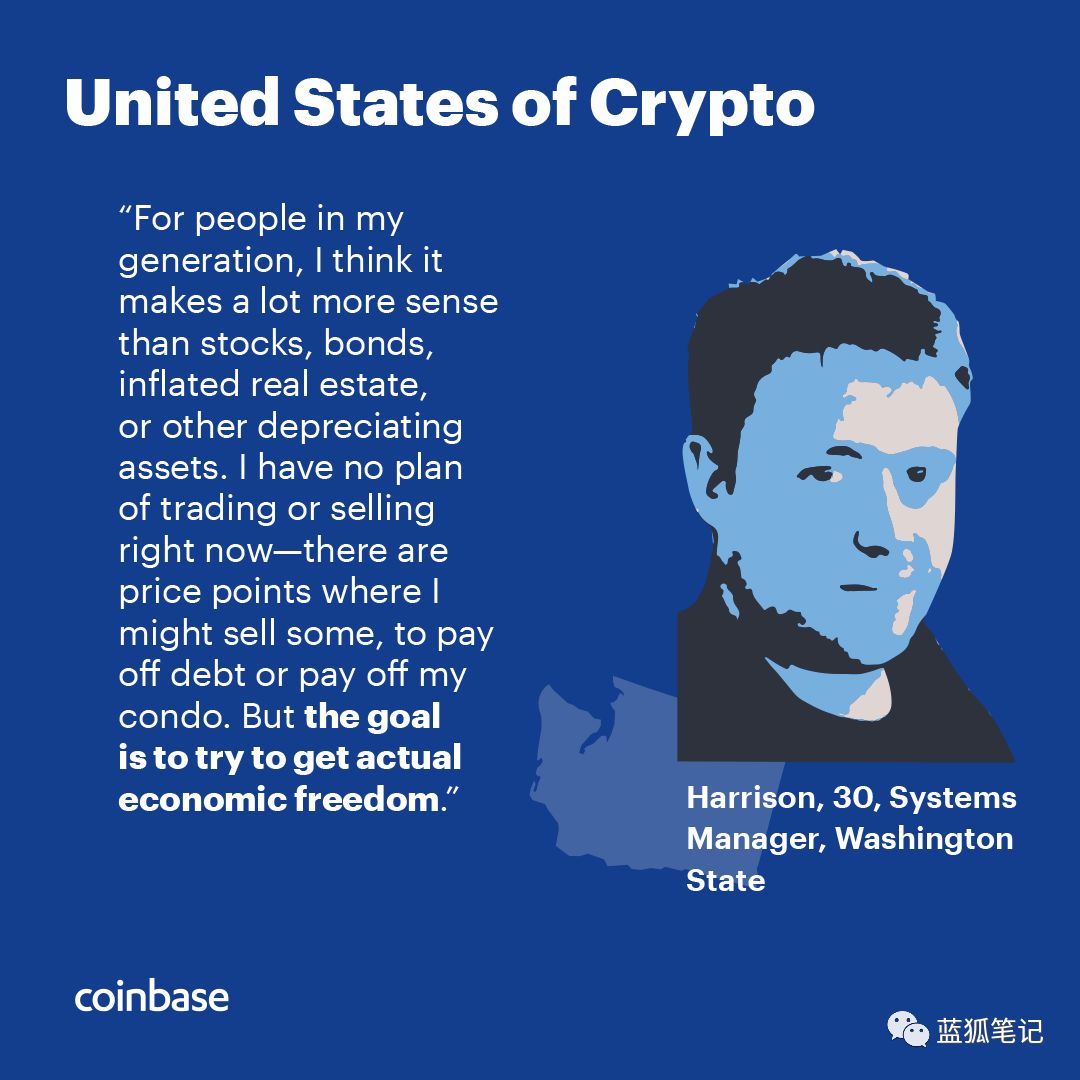 “For our generation, I think it makes more sense than stocks, bonds, inflationary properties, and other depreciating assets. I don’t have a plan to trade or sell now – I might sell some at some price point. Used to pay off debts or pay for apartments. But the goal is to achieve economic freedom."

Similarly, Todd also mentioned that cryptocurrency has opened up a new form of investment acquisition. 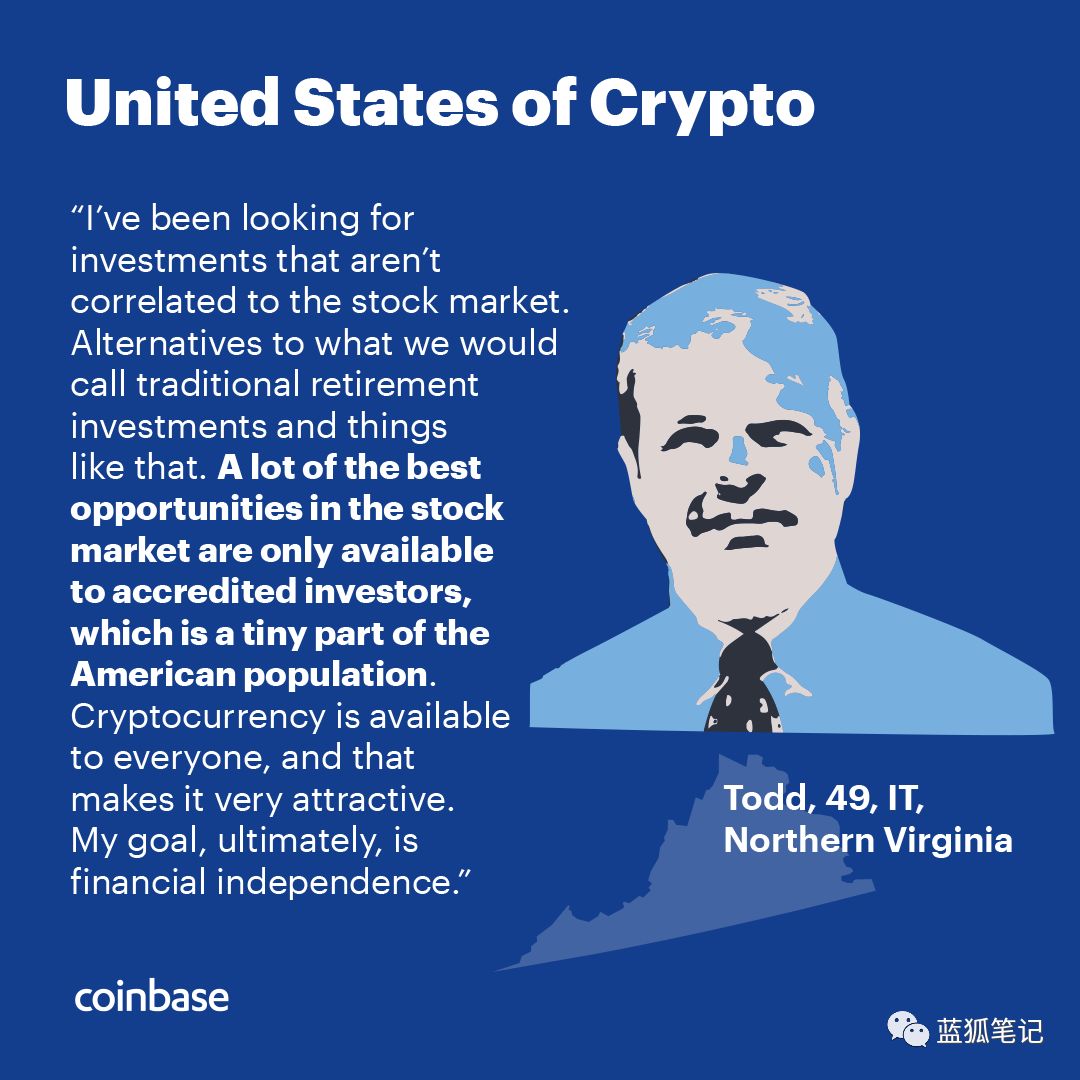 “Many of the best alternative investment opportunities (not related to the stock market) are open only to qualified investors, which is a small part of the US population. And cryptocurrencies can be used by everyone.”

Some people also participate in cryptocurrencies in order to teach others. 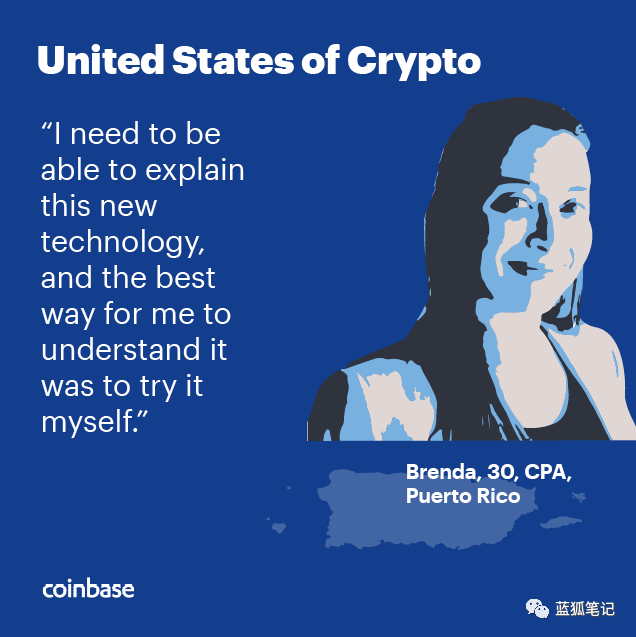 Brenda is a 30-year-old certified public accountant currently living in Puerto Rico. She recently started practicing and noticed that she was in a field where she had little training on cryptocurrencies, so she bought some cryptocurrencies to help her understand. she says:

“I need to be able to explain this new technology, and the best way I know about it is to try it myself.”

Opportunity to experience emerging technologies is another key driver.

“I am very interested in new technologies. I actually learn cryptography and computer science at university, so I can easily understand it. I would like to find a job on cryptocurrency or blockchain technology.”

(According to Coinbase's research, 42% of the top 50 universities in the world have at least one course in encryption technology or blockchain. The students in the class come from various disciplines and participate in the courses in this field. More and more interested)

As interest has increased, states have increasingly enacted regulations to address the need for cryptocurrencies and blockchains. As of June 2019, more than 70% of states in the United States have issued decrees related to cryptocurrency or blockchain technology. In April, Ohio announced that it would receive taxes on bitcoin payments. Josh Mandel, former Ohio State finance minister and supporter of the decision, said in an interview with the NPR market, "We are doing our best to make a small effort… creatively considering how technology can make taxpayers Life is easier.” (Overstock.com took advantage of this opportunity to pay approximately $35,000 in taxes using Bitcoin)

Earlier this year, Wyoming passed a set of thirteen laws in which cryptocurrencies were viewed as currency and banks were allowed to “provide hosting services for digital assets”. With these rules, this mountainous state is trying to become the legal location for banks that want to provide asset management and other encryption services to customers across the country. Since 2015, New York State financial regulators have awarded 18 so-called BitLicenses to virtual currency companies that want to represent clients for Wall Street-style transactions or other transactions.

How interested are Americans in buying cryptocurrencies? According to the coinbase study, in the near future, more than 15% of Americans may "somewhat" or "very" possibly purchase bitcoin or some other cryptocurrency. Coupled with institutional investors, this figure may be even higher: asset management giant Fidelity Investments said in May that 22% of its institutional investors already own digital assets, and almost half of them might consider adding cryptocurrencies to their portfolios. .

As consciousness grows, this seems to continue. The search for "bitcoin" on the tubing reached a record high this year. New Jersey customer Christopher explained how he extracted fragments from the tubing to create a PPT that was used to explain bitcoin to his baby boomer's father. He said:

"I grabbed some videos, some pictures, and then disassembled them in a way that he could understand. Now, he also has his own cryptocurrency, and every time his token appreciates, he will send me a copy. Screenshot, this is the real bond between us." 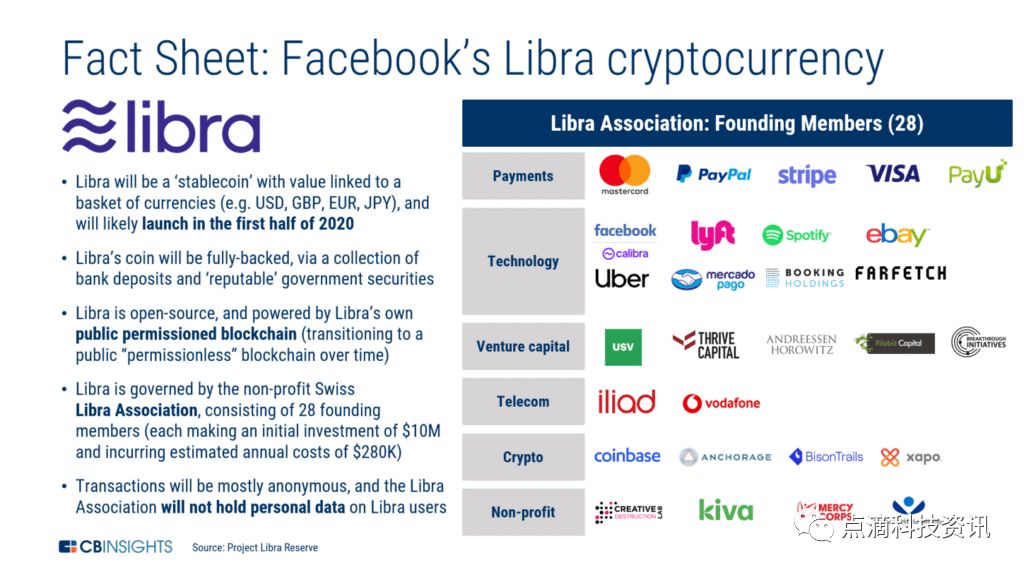