On November 22nd, the Shanghai Headquarters of the People's Bank of China issued the “Intensifying Supervision and Control to Combat Virtual Currency Transactions”, saying that it carried out special rectification of virtual currency-related activities in Shanghai, and ordered the discovery of virtual currency transactions registered overseas. The platform provided services for promotion, drainage and other services to immediately rectify and withdraw.

Regulations continue to hit the illegal and non-compliant behavior of the blockchain. On November 21st, the Office of the Leading Group for the Special Remediation of Internet Financial Risks in Shenzhen issued the “Risk Tips on Preventing the Illegal Activities of Virtual Money”. On November 14, the Shanghai Financial Stability Joint Office and the People's Bank of China Shanghai Headquarters Mutual Gold Rehabilitation Office jointly issued the "Notice on Launching the Circulation and Renovation of Virtual Currency Trading Places"; on November 13, the Dongguan Financial Work Bureau issued "About Prevent the risk warning of illegal fund raising in the name of “virtual currency” or “blockchain”.

This is in stark contrast to the development path of P2P in the past. Nowadays, the P2P field is facing a “clear tide”, but it is clear that the blockchain has learned a lesson.

Looking back at the starting point: Yunus in 1976 and Nakamoto Satoshi in 2008

The P2P model originated in 1976. At that time, Muhammad Yunus, who had not yet won the Nobel Peace Prize, loaned $27 to 42 poor villagers to protect them from the exploitation of usury. And in 1979, the unsecured micro-loan model, Grameen Bank, was created.

The real birth of P2P is after entering the 21st century. In 2004, Zopa, the first P2P online lending company in the world, was established. It inherited the "Graham model" and innovated into a true P2P model.

In 2006, the P2P model was introduced to China. In 2007, China’s first P2P platform was auctioned. However, by 2012, P2P has developed relatively slowly. According to statistics, there are no more than 100 national platforms in this period.

The subsequent "first year of Internet finance", P2P ushered in its highlight moment.

In 2013, the government deliberately leveraged, and many banks contracted the credit business, and P2P just solved the loan problem of small and micro enterprises. In the second half of the year, the balance treasure went online, and P2P also borrowed Dongfeng to help solve the problem of private idle funds, but investment channels. Less problem.

This year, the number of P2P online lending platforms exceeded 1,000. 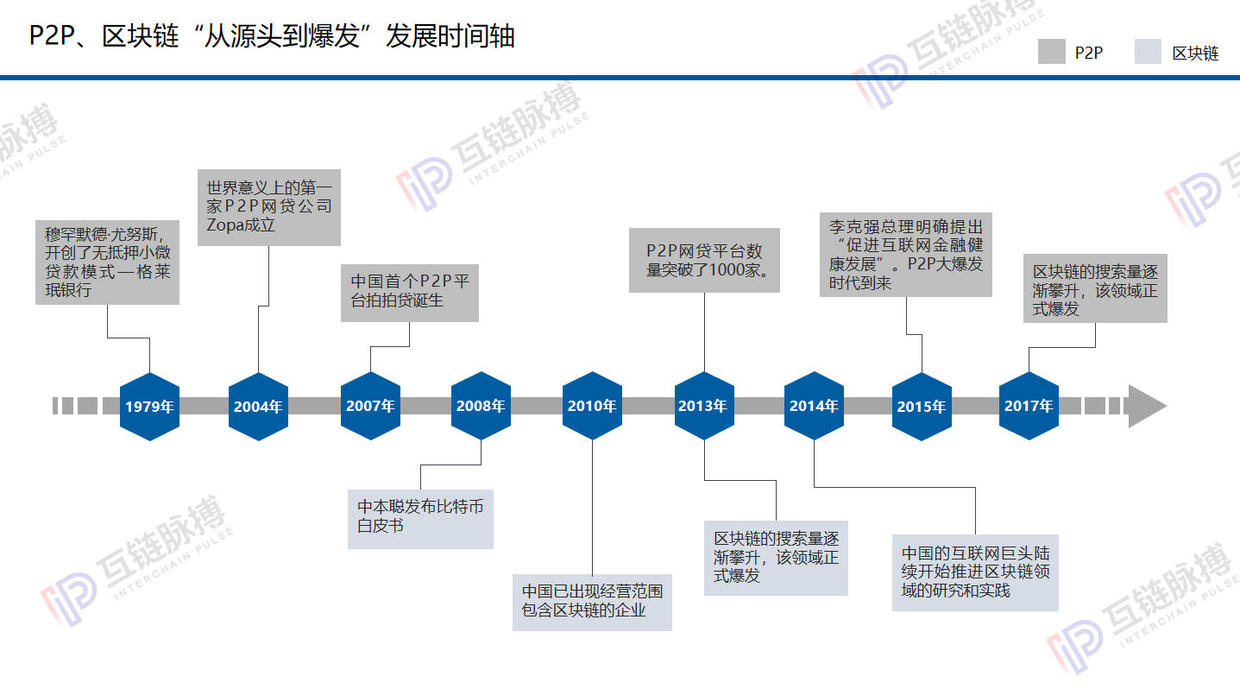 On the other hand, in 2008, when P2P was still moving slowly, blockchain technology began to sprout, and Nakamoto launched the Bitcoin white paper in October.

But compared to P2P, the development of blockchain is faster.

At the end of 2013, Bitcoin ushered in the first small peak. According to the Baidu Index, the amount of bitcoin search reached the highest point so far. In 2014, China’s Internet giants began to promote research in the blockchain field. practice.

In 2016, Bitcoin was halved and the market fluctuated, once again entering the public eye. Along with this, more blockchain companies and blockchain projects were born at this stage. According to the company's data, the business scope established in 2016 includes more than 1,000 companies in the blockchain; according to innojoy data, in 2017, China applied for nearly 1,500 blockchain invention patents.

That is, in 2017, the search volume of the blockchain gradually increased, and the field officially broke out.

At the same time of the P2P outbreak, the rift of the thunderstorm appeared; when the blockchain emerged, the pseudo blockchain project was also in the air.

In fact, the appearance of P2P cracks has been shown before the outbreak. In 2013, P2P expanded rapidly, and some media reported that the cost of building a pseudo P2P platform during this period was not high. Some software development companies will develop relatively mature network platform templates, each P2P template is priced at around 30,000 to 80,000, and the total cost of starting an online lending platform is around 200,000.

According to statistics, in 2014, the Wenzhou Municipal Public Security Bureau investigated and dealt with seven P2P online lending platforms suspected of illegally absorbing, and the amount involved has reached more than 100 million yuan. The cost of doing evil is small, and the income is high. P2P has thus become the hardest hit area for “illegal fundraising”. Even on some platforms (Hengjin Loan), I went online in the morning and ran in the afternoon.

By 2015, the P2P outbreak period has come, and the stocks of P2P have skyrocketed. More reports have been reported. During this period, CCTV reported P2P 9 times, including "News Network" 6 times, and Premier Li Keqiang made 4 sounds to P2P. "Focus Interview" 1 time, "China News" 1 time. At the same time, in December 2015, Pleasant Loan was listed on the New York Stock Exchange, becoming the first domestic P2P online loan to go public in the US.

But after the peak, regulation followed. In August 2016, the China Banking Regulatory Commission promulgated the Interim Measures for the Management of Business Activities of Internet Lending Information Intermediaries. In November 2016, the China Banking Regulatory Commission and the Ministry of Industry and Commerce and the State Administration for Industry and Commerce issued the “Guidelines for the Registration and Registration of Internet Lending Information Intermediaries”. The record can be carried out but it is not going smoothly. As of now, no P2P platform has become a regular army through filing.

The P2P platform has successively thunderstorms, and the blockchain has also entered the stage of mixed projects.

According to media reports, at this time there are a large number of shops writing a blockchain white paper on the Internet, starting at 5000, plus PPT8500, and English translation plus 1000. Mutual chain pulse survey in August 2018, in Shenzhen, the development cost of a single pyramid currency system is between 6-10 million yuan.

It is also a low-cost, high-yield, fast-moving business. The pyramids and funds in the name of the blockchain will become popular. At the beginning of 2018, the head of the Tencent Security Anti-fraud Lab said that the MLM platform using the blockchain concept has exceeded 3,000. The blockchain has also been stigmatized by pyramid schemes and bubbles.

But this time, the country clearly draws on the experience of P2P governance, preemptive, and quickly promoted supervision in 2017. On September 4, the People's Bank of China and other seven ministries and commissions issued the "Announcement on Preventing the Risk of Subsidy Issuance Financing", cracking down on various types of token issuance financing activities, and clarifying that ICO is illegal. Immediately afterwards, the heads of domestic exchanges were interviewed one after another, allegedly being restricted from leaving Beijing; the ICO platform began to retreat and the virtual currency prices plummeted.

But in 2018, there are still quite a few people in the blockchain field. The state has once again promoted supervision. In August 2018, the five ministries and commissions, such as the China Insurance Regulatory Commission, issued the “Risk Tips on Preventing Illegal Fund Raising in the Name of “Virtual Currency” and “Blockchain”. Beijing, Shenzhen, Hainan, Shanghai and other places have also issued risk warnings related to illegal fundraising of virtual currency.

Since then, active regulation to promote compliance has also been introduced. In February 2019, the National Network Information Office “Regulations on the Management of Blockchain Information Services” was officially implemented, and in March and October, two batches of domestic blockchain information service filing lists were issued.

Blockchain is better than P2P: stronger support is stronger

By 2019, the blockchain was elevated to the national strategic level. Blockchain concept stocks soared; People's Network, CCTV, Xinhuanet and other media frequently reported; "The first block of the blockchain" Jia Nan Zhizhi listed on the NASDAQ.

State support, rising stocks, frequent media reports, and “first stocks”… The blockchain in 2019 seems to be repeating the P2P boom in 2015.

However, the inter-chain pulse is concerned that the government's support for the blockchain sector is stronger and the regulation is stronger than the previous P2P.

Previously, the support of Internet finance was proposed by Premier Li Keqiang, and P2P was developed as a form under it; at this stage, the “1024 Conference” raised it to the national strategic level.

In terms of regulation, blockchain supervision is pre-emptive and strong.

As far as this year's regulation is concerned, although P2P is also a strong regulation, it is more likely to clean up the battlefield afterwards. In January 2019, the Office of the Leading Group for the Special Remediation of Internet Financial Risks issued the "Opinions on Doing a Good Job in Classified Disposition and Risk Prevention of Online Credit Institutions"; in October, the Supreme People's Court, the Supreme People's Procuratorate, the Ministry of Public Security, and the Ministry of Justice jointly Issued "Opinions on Several Issues Concerning Handling Criminal Cases of Illegal Loaning".

Recently, the blockchain field has also introduced strong supervision, and it has the nature of preventing the micro-duration before the development of the situation. In October 2019, the state upgraded the blockchain development to a strategic height. On November 14, the Shanghai Financial Stability Joint Office and the People's Bank of China Shanghai Headquarters Mutual Gold Rehabilitation Office jointly issued the "Notice on Launching the Circulation Remediation of Virtual Currency Trading Places", indicating that the virtual currency related activities were arranged.

On November 21st, the Office of the Leading Group for the Special Remediation of Internet Financial Risks in Shenzhen issued the “Risk Tips on Preventing Illegal Activities of Virtual Money” to investigate the illegal activities of “virtual currency”. It is worth noting that the "Prompt" document pointed out that this action is the relevant deployment of the National Mutual Remediation Office, which is consistent with the deployment of the Shanghai Mutual Rehabilitation Office on the 14th. Explain that this is a national action.

In this way, stronger support and stronger supervision will help the blockchain to embark on a new development path different from P2P.

Analysis: Despite the healthy growth of the Bitcoin network, its market is still worrying