The development of DeFi is attracting more and more attention. If DeFi will have a bright future, then MakerDAO is no different from the behemoth of this great field, such as the bitland in the mine. According to DEFI PULSE, the MakerDAO project has locked a total of $398.6 million so far, and the locked amount accounts for 86.61% of the entire DeFi ecosystem.

Founded in 2014, MakerDAO is an automated mortgage platform on Ethereum and a provider of stable currency Dai. MakerDAO is a decentralized derivative financial system based on Ethereum. It uses a dual currency model, one for the stable currency Dai and the other for the equity token and the managed token MKR. Dai's main online line in December 2017. Through the dual currency mechanism, MakerDAO enables the entire decentralized pledged loan system to function.

Dai and the US dollar are anchored 1:1. Like other stable coins, Dai also has price fluctuations.

Unlike other stable currencies, Dai is gaining value by encrypting digital currencies with excess mortgages. Centralized stable currencies such as USDT, TrueUSD, and GUSD have $1 of legal currency for each dollar of tokens issued, and 1 Dai is backed by digital assets that exceed $1.

Unlike USDT and TrueUSD, Dai's operating mechanism is open and transparent, which is one of Dai's advantages. Not only is Dai itself transparent, but in exchange for Dai's collateral, Ethereum's value fluctuations and quantity are also transparent and publicly visible.

MKR is an equity and managed token in the entire MakerDAO system.

There is a situation that will lead to the system to issue MKR: if the collateral price collapses in a short period of time and falls below the liquidation ratio, the mortgage assets cannot support Dai's liquidity, the system will confiscate the assets and auction, in order to repay the previously lent Dai (for the system, every release of Dai means a liability for Dai).

The system began to issue MKR and sold MKR to purchase Dai. The system then sells the mortgaged assets in an open auction and uses the raised Dai for repurchase and destruction of the MKR.

In this case, the holder of the MKR became the bottom of the final system. MKR holders enjoy the benefits of system growth while also bearing the risk of system crashes.

It can be said that the holders of MKR control the operation of the system. So how is MKR distributed in the system?

MKR currently has a total of 1 million pieces, with 61% of the shares circulating in the market, 39% allocated to the Foundation, and 15% allocated to the core team. The allocation mechanism of MKR is not clear and ICO is not carried out. At present, the top 10 positions held by the top 10 are 73.67% of the total, and the top 25 are 81.85% of the total. The fourth place in the holdings is the investment institution a16z. 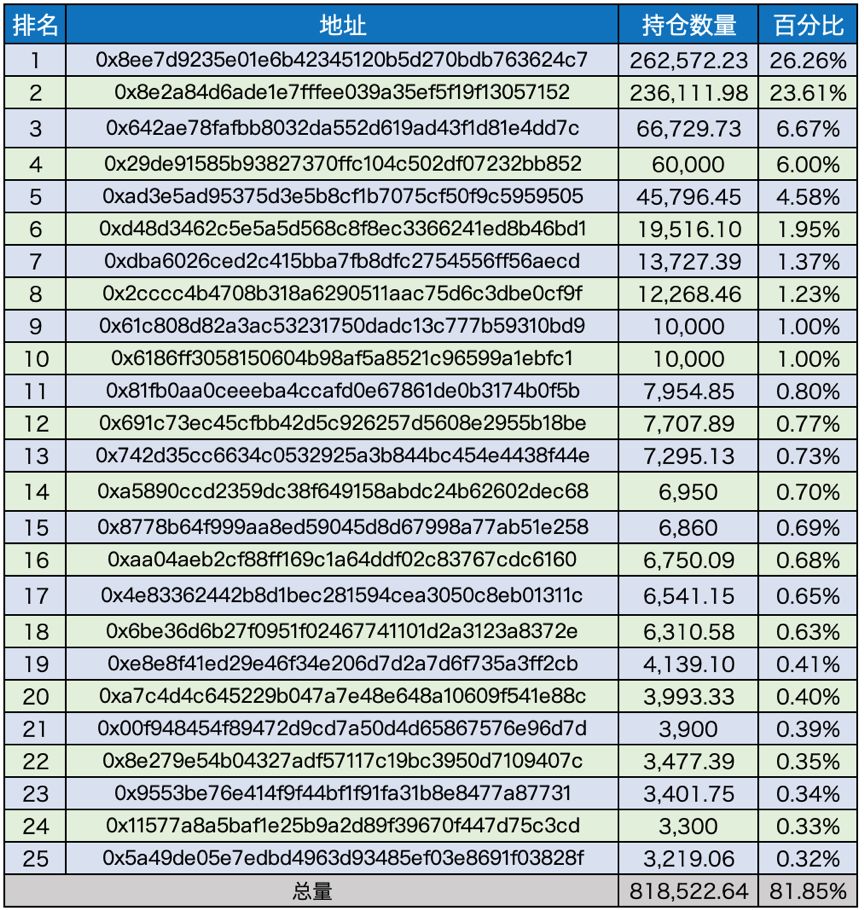 After learning about the two currencies, let's take a look at how the entire system works. A map of the carbon chain value is produced so that readers can understand the process more clearly:

Pledge ETH for Dai: First, the user enters the ETH held in his hand into the ether pool to get PETH. After that, PETH was entered into the Maker Smart Contract CDP (Collateralized Debt Positions) to obtain Dai.

The most important thing in the whole system is how to ensure that the price of Dai and the US dollar remain within a stable range. MakerDAO designed a target price change rate feedback mechanism (TRFM): When the Dai price is below $1, the CDP debt ratio will decrease. This means that the same amount of ETH (assuming the ETH price does not change) will reduce the number of Dais, reduce the supply of Dai in the market, increase the stability fee, increase the cost of obtaining Dai, and thus reduce the decline in Dai prices.

In the past three months, MakerDAO has increased the stability of the system six times in succession, which is why. As the market picks up, Ethereum prices start to rise, and mortgage Ethereum borrows DAI as a leverage. People can use the borrowed Dai to buy more Ethereum and make a profit. In this case, the system mortgage generates a lot of Dai, and these DAIs are not used as stable coins like the USDT, but are sold by the holders for more digital assets. In this case, the value of Dai against the US dollar cannot be stabilized and will fall all the way. This is the background for MkaerDAO to increase the stable currency rate.

Conversely, if Dai's price is higher than 1 US dollar, CDP's debt ratio will increase. The same ETH can exchange more Dai, and Dai's supply will increase, which will reduce market demand and lower prices.

What is the impact of a pledge of collateral in a short period of time?

The surge will not destroy the system, but will lead to an increase in the number of users of the system, so that more and more people mortgage ETH to Dai and then buy ETH. At the same time, the long-term increase in ETH will cause Dai to exceed supply, so the price will be under $1 for a long time. This is why the stability fee has increased from 0.5% to 1% since February, then 1.5%, 3.5%, 7.5%. Up to 14.5%. If ETH continues to rise, the stabilization fee may increase further.

Once a plunge occurs? First, the mortgage behind Dai is over-collateralized, which means that you can only get $60 worth of ETH for a $100 ETH, which creates a cushion. The system stipulates that when ETH falls to 80 US dollars, it can mortgage more ETH or liquidate. If it is liquidated, the mortgager still needs to pay a fine. The fine will be returned to the PETH pool to destroy PETH.

If the holder does not replenish the position in time, they will need to pay the fine. However, even if a fine is imposed, it is more cost-effective than direct system liquidation, so most mortgagers will pay a fine to redeem ETH. Because there are users who do not watch the discs in time, they also breed groups that specialize in arbitrage for the contract of clearing. If it falls below $60, this could trigger a global liquidation, the operation and creation of the mortgage debt warehouse will be banned, and the holders of Dai and CDP will receive a convertible net asset value.

Since 2017, the price of ETH has also skyrocketed, but the MakerDAO system has not received any impact, which is enough to show that it is still a healthy pledge loan market at this stage.

In the entire system, the current (first quarter of 2019) most profitable is the holder of MKR, which was previously the holder of PETH, because the liquidator's fine is as high as 13%, and the fine will be used for purchase. And destroy PETH to increase the ratio of PETH convertible ETH. Now the reason why MKR holders make money is because Dai's stability fee is constantly increasing, and MKR's destruction is increasing. 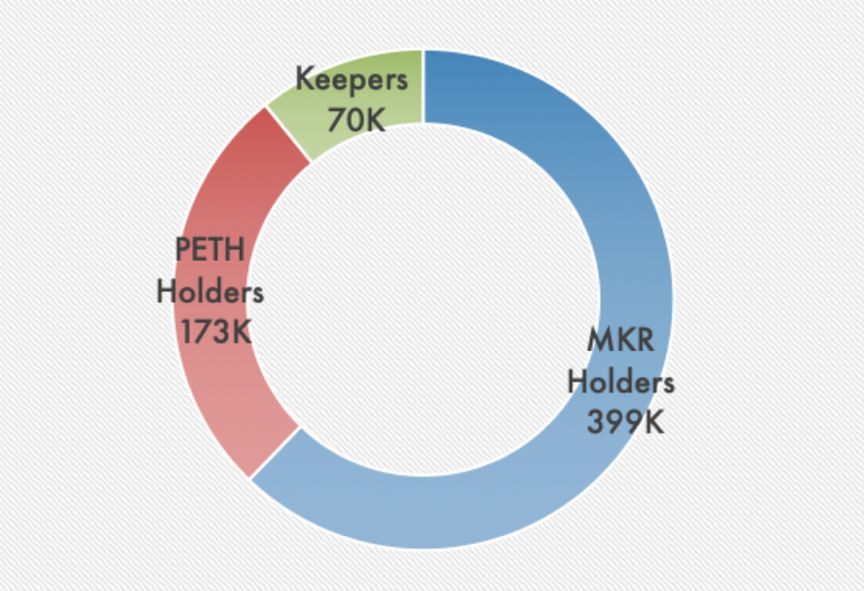 Who is holding MKR?

Since MKR authors are extremely important to the governance of the entire system, we need to see who is holding MKR.

Currently the team has 29 major members and the CEO is founder Rune Christensen. 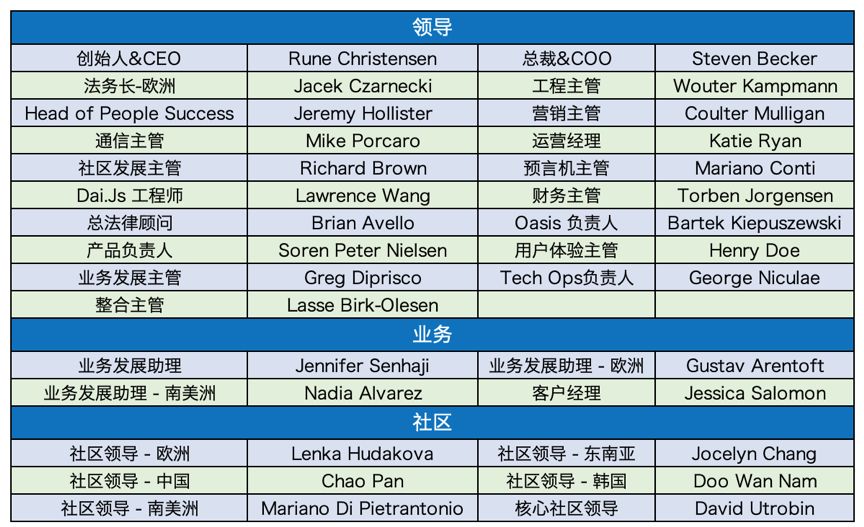 How much does MakerDAO have in the DeFi market? The development of DeFi has drawn increasing attention. If we think that DeFi will have a bright future, then MakerDAO is no different from a unicorn in this great field, such as the bitland in the mine.

According to DEFI PULSE data, up to now, the MakerDAO project has locked a total of 398.6 million US dollars, accounting for 86.61% of the entire DeFi ecosystem.

How stable is the MakerDAO system?

Through the Dai browser, you can see that the entire system has locked a total of 2.06 million PETHs, destroyed 781 MKRs, and produced 89.92 million Dais.

At present, the overall mortgage rate of the market is 410.852%, which is much higher than the minimum clearing rate of 150%. There is no systematic liquidation risk during the period. The debt ceiling ratio is 89.917%, and PETH has a small premium to ETH.

ETC community veterans: Currently the community mainly promotes MultiGeth and Parity nodes, and Geth will be phased out