Six indicators to explore the clues of the cryptocurrency market

Since November, Bitcoin has fallen by nearly 30%, and prices have risen to a new low in the past six months. Of course, the decline in other mainstream currencies is even more tragic, with most currencies renewing their lowest since April.

The CEO of IntoTheBlock sent a paper analyzing several indicators about Bitcoin.

1. The profit and loss data of the currency holding address indicates that the BTC support level is $6,600 and the resistance level is $7,700.

The indicator on the chain shows:

2. The purchase cost of approximately 2 million currency-bearing addresses is between $6,600 and $7,900.

This means that the purchase of Bitcoin's currency holding address at a cost of $6,600 to $7,900 may result in purchases or sales activities within this price range. In other words, $6,600 seems to be an important support level. Once the price drops by $6,600, some of the addresses are "no longer making money," which means they will lose money if they choose to sell. If the sell-off continues, these currency-bearing addresses may trigger panic selling.

Second, the total amount of bitcoin transactions has rebounded slightly

As shown in the chart below, the total amount of Bitcoin's large transactions (single amount greater than $100,000) has rebounded to last week's level in the past week. This shows that both investor confidence and trading activity have risen.

According to the small onion report, Tokenview data showed that the index on the bitcoin chain rebounded last week (2019.11.18-11.24), and large transfers were frequent.

As shown in the chart below, in the past two weeks, the encryption transactions in Western countries accounted for 53.02%, slightly higher than the Eastern countries.

In the past week, the number of active addresses in the Bitcoin network has remained relatively stable, with a slight increase of 3.48%.

V. The outflow of funds is serious

The exchange's net traffic analysis shows that funds have been flowing out of the central and cryptocurrency exchanges in the past few days. It is worth noting that this trend seems to be moving towards the worst trend of the year.

In the midst of a downturn, investors typically exchange crypto assets for stable currencies. Tether's trading activity seems to reflect this.

Of course, the above data is not a prediction of the encryption market trend, but only provides some clues to the market.

As for how the bitcoin market is going, the analysts' opinions are mostly pessimistic.

The onion analyst pointed out that the BTC achieved a downward decline in the intraday lows in the early trading session, which caused the short-term market bearish sentiment to further “explode”. With the steady pressure of the 4-hour 50-period moving average and the effective fall of the 7300 key support, the downtrend is already quite clear.

In addition, crypto-equity analyst FilbFilb conducted a poll in the telegraph group, with approximately 2,400 people voting. The results show that 60% of Bitcoin investors believe that $6,700 is still not at the bottom.

And trader Peter Brandt said that the bitcoin longs on Twitter must be cleared so that the price can hit $50,000. He said that perhaps bitcoin prices need to be depressed for quite some time in order to make preparations soar to $50,000.

However, it is worth noting that, according to Coindesk's analysis, in the field of cryptocurrency, BTC prices have now fallen below their support level of 7,000 US dollars, and the traditional market performance is flat due to the increasingly complex geopolitical influence. Although BTC has fallen, there is no indication that capital has moved from the cryptocurrency sector to the traditional market. 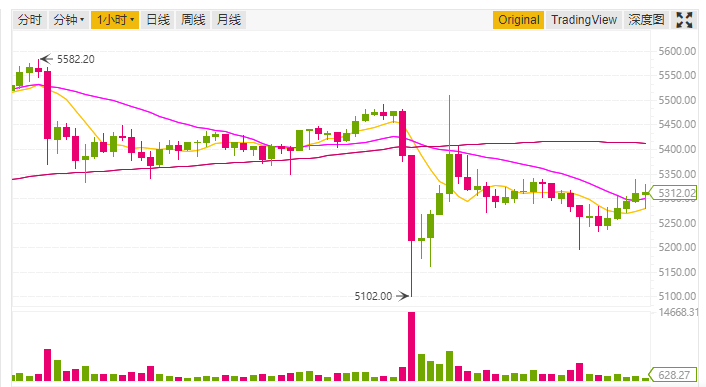 BFX Storm: Any war is a game of power