In the "1025 New Deal" full moon, in a month, the official media's attitude towards the blockchain has changed.

On November 25th, the "People's Court News" published an article in the 02 edition of "The law and technology are indispensable to combat" blockchain "MLM", pointing out that "blockchain" MLM fraud has risen and has spread, and discusses how Combat. The latest blockchain review published by Xinhua News Agency reminds the public that "there is no way to misunderstand the blockchain." Blockchain cannot be a "gimmick" for speculation and deception.

There have been many similar official media comments recently. The focus of criticism from the Xinhua News Agency, the People's Court Newspaper, and the Economic Reference Newspaper has all pointed to the issuance and speculation of virtual currencies under the name of the blockchain. Interlink Pulse counted seven party media at the beginning of November, and 65 directly related reports were released within one week of the New Deal. At that time, the keywords were data, industry, security, innovation, etc. A large number of articles were biased towards the concept of science popular blockchain and There are only three articles to remind you of the hype of virtual currency.

The turning of official media speech is to some extent synchronized with the dynamics of national regulatory policies.

Recently, Beijing, Shanghai, Shenzhen and other governments have begun investigating exchanges and rectifying virtual currency trading activities. A number of "currency" media have been blocked. From voice to action, the country is cracking down on illegal virtual currency transactions.

Incomplete statistics on the pulses of the interlinks. Xinhuanet and People's Daily included articles reprinted on the subject of combating virtual currencies or exposing fraudulent use of blockchain. There were 28 articles from October 25 to November 25 at noon. Among them, a total of 15 articles in a week (November 19 to November 25). 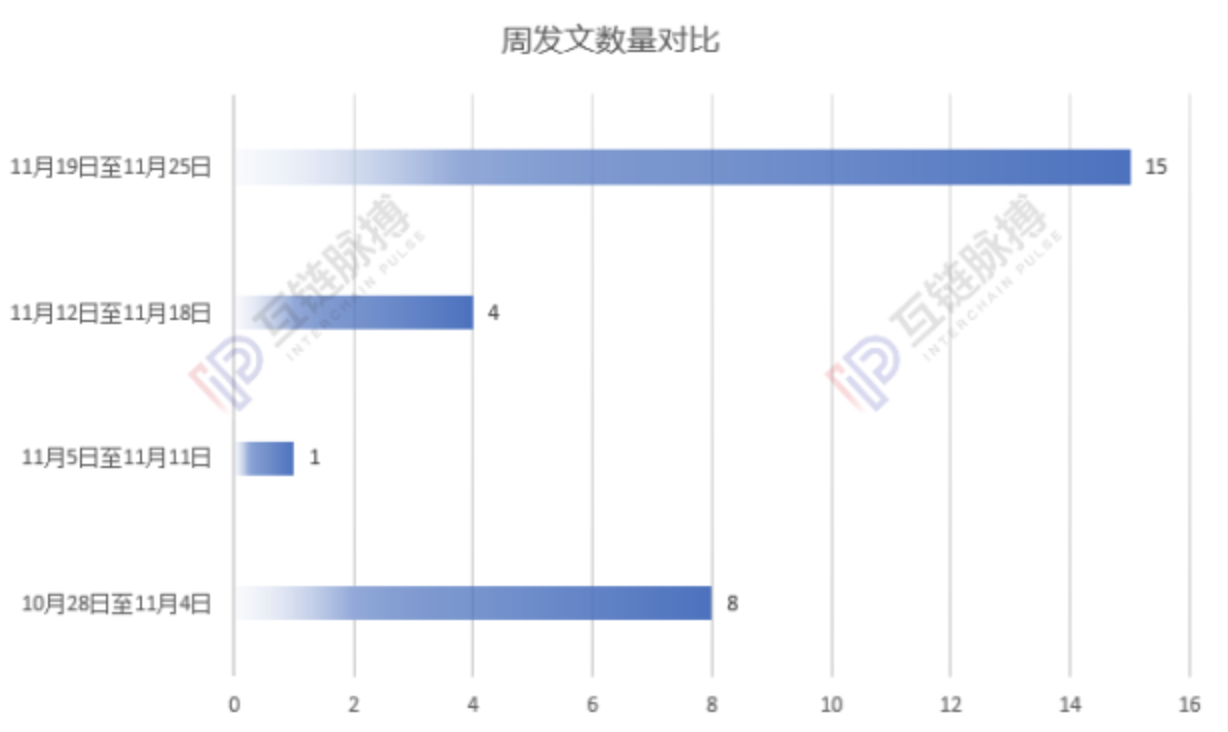 Interlink Pulse observed these articles and found that they mainly revolved around three points of view. Including clarifying the relationship between the blockchain and virtual currency, explaining that the concepts are not the same; second, cracking down on fake "blockchain" scams, or exposing virtual currency scams; finally reminding the public that blockchain cannot be a gimmick for hype, let alone Deceptive signboards need to be alert to such activities and invest rationally.

Original source: Blockchain is not equal to virtual currency

Some official media distinguish the two from the nature and use of blockchain and virtual currency . Beijing Business Daily compares blockchain as a grabber. Virtual currency is just a skin. Blockchain is a low-level technical architecture and a grabber for industrial interconnection and can serve the real economy. China Economic Network pointed out that the blockchain can empower the real economy and cannot be vulgarized as "speculation of coins."

In the "pseudo" report of the official media, the focus interview was conducted on November 18th. The report was titled "Scamming under the name of" blockchain ", and chaos is worrying." "scam. For example, a blockchain wallet project similar to BEEBANK uses the concept of the blockchain to engage in a fund disk and immediately circulate money; or similar to the blockchain virtual pig raising and Qubu Technology's online points to earn games, under the guise of the sharing economy However, borrowing the banner of the blockchain has nothing to do with the blockchain.

On November 20th, the Science and Technology Daily published an article "When various virtual currencies are flying all over the sky, they are wary of turning the blockchain into a" block mess ". The "RXChain Ruixing Chain" and "Alibaba Coin" that expose the popularity of well-known enterprises are not related to Ruixing Coffee and Alibaba Group, but their names make the "scam" more confusing.

The Economic Reference also summarized the recent pseudo- "blockchain" chaos. On November 22, it published a paper entitled "Underground" speculation in the currency and another block chain to cheat "golden signs". On the one hand, the concept of the blockchain has become a "must-have hot spot" in the stock market. Some investors are not concerned about whether the blockchain can bring benefits to listed companies, and simply hope that the company is linked to the blockchain to push up the stock price. On the other hand, the coin issuing company that has already fallen into a low tide has recently "hit chicken blood", and the coin issuance has induced the public to buy.

After clarifying the concept of the blockchain and investigating the details of the fake "blockchain" scam, the official media is spared no effort to warn the public to reduce speculative psychology and rationally identify fake projects or scams.

Many official media reports have titles with warning text. For example, CCTV, "How to play when the blockchain is on fire?" Experts advise: Don't invest in these cryptocurrencies ", The Beijing News" Blockchain is not used for "hype" ", Economic Daily" Be wary of deceiving by using blockchain hype ", Xinhua" Some people borrowing blockchain "Famous deception is worthy of vigilance" …

Many of the above reports mentioned the recent investigation and rectification of virtual currency transactions in many places. In fact, this series of vocalizations and actions is bound to happen.

The "1025 New Deal" can create a good social environment for the role of blockchain technology in the real economy and manufacturing industry. However, when the New Deal came out, the "currency circle" also boiled, and the illegal transactions of virtual currencies are on the rise.

For example, on October 26th, Sun Yuchen sent a Weibo to claim that when he returned to China in 2013 to promote the blockchain, the term "blockchain" did not exist, and now their project is still alive. Later, he also invited Luo Yonghao to join Tron. A mutual chain pulse issued on November 4 pointed out that the blockchain in the eyes of "Sun Yuchens" is not a blockchain advocated by the country. For "Sun Yuchens" who started their business with ICO and virtual currency transactions, the carnival must be difficult to last.

On November 15th, TRON ’s official Weibo “TRON TRON official blog” was closed, and the page showed that the account could not be viewed due to complaints about violations of laws and regulations and relevant provisions of the Weibo Community Convention. Also blocked is Binance's official Weibo. On the evening of November 20th, the "currency circle" media-Deep Chain, Coin Circle Bond, One Coin, and the speculation school were blocked, citing "the user complained and reviewed by the platform for alleged violations of relevant laws and regulations and Policy, account has been discontinued. "

Weibo and public account are only part of the process.

On November 25th, the Beijing police recently cracked the illegal digital currency exchange BISS (Coin Market) and characterized it as illegal fund-raising scams. This is the first case where the virtual currency exchange in the "currency circle" was directly blocked. Next, as the local governments check and rectify the closure of the network, some illegal and illegal transactions are bound to be impacted.

It is reported that at present, the Shenzhen Local Financial Supervision Bureau has passed the "Ling Ling" system to find out 39 illegal enterprises suspected of carrying out virtual currency activities. At present, the list of these 39 companies has not been released, and the results of investigation and rectification may severely crack down on illegal transactions.

As early as a few days after the "1025 New Deal" was issued, various regions have issued notices of investigation and rectification, and launched actions.

On November 11, the Ministry of Industry and Information Technology of the Inner Mongolia Autonomous Region issued a notice on the joint inspection of the cleanup and rectification of virtual currency "mining" enterprises. The inspection period lasted from November 11, 2019 to November 25.

On November 13, the Dongguan Financial Work Bureau issued a notice on "Precautions against Risks of Illegal Fund Raising in the Name of" Virtual Currency "and" Blockchain "."

On November 13, the Beijing Municipal Bureau of Local Financial Supervision issued a “Risk Tips on Branches of Trading Venues Carrying Out Operations Without Approval”.

On November 14, the Shanghai Joint Office for Financial Stability and the People's Bank of China's Shanghai Headquarters' Mutual Funds Rectification Office jointly issued the "Notice on the Rectification of Virtual Currency Trading Venues".

On November 21, the Shenzhen Municipal Leading Group Office for Internet Financial Risk Special Rectification issued the “Reminders on Preventing the Risks of“ Virtual Currency ”Illegal Activities” and notified the investigation.

On November 22, the Shanghai Headquarters of the People's Bank of China released "Strengthening Supervision and Prevention and Control to Combat Virtual Currency Transactions", stating that special rectification of virtual currency related activities in Shanghai will be carried out.

So far, special rectification activities have been carried out in Inner Mongolia, Dongguan, Beijing, Shanghai, and Shenzhen, and certain results have been achieved. It is conceivable that the wind of "original clear source" will continue, the "currency circle" earthquake will continue, and the application of blockchain technology will usher in a cleaner social environment.

Bitcoin sucked away by the "black hole", the actual total amount of BTC has been less than 21 million

Former Governor of the Reserve Bank of India: Blockchain will stimulate the growth of small and medium-sized enterprises

University of Qatar, HBKU, collaborates with IBM to provide training programs on emerging technologies such as blockchain