The Unrecognized Potential of Ethereum: From Prisoner's Dilemma to Cooperative Game

The author is Virgil Griffith, a member of the Ethereum Foundation. The original title is "Ethereum is game-changing technology, literally." It is compiled exclusively by Encrypted Valley.

The author cuts in from the perspective of game theory and tries to answer the classic question of "What is Ethereum?" Finally, it is inferred that: Ethereum is an unprecedented cooperative game arena, a powerful economic carrier that we do not understand yet.

People often ask "What is Ethereum?" The usual answer is: "World Computer." That's it?

The largest intelligent contract platform, Ethereum, can act as an external monitor that will not be bought and ubiquitous, and is used to enforce and monitor agreements between stakeholders. This means that in theory, Ethereum can turn any non-cooperative game into a cooperative game (alliance game). Under the introduction of the smart contract mechanism, the previous interest pattern will be broken.

The transition from non-cooperation to cooperative gaming is achieved through a technology called Game Warping, which we define as a transparent, triggerable, non-interventional chain clearing payment system. It makes the creation of new rules possible, making cooperative games a logical choice.

Ethereum and smart contracts are not necessary to change the game. But before that, it is difficult to find universal, trusted third-party tools. Of course, when it comes to the combination of smart contracts and real games, we must find the right mechanism to bind the key operations of the game to the chain contracts.

The most famous problem in game theory is the prisoner's dilemma, which is a typical non-cooperative game. In this game, a rational strategy puts the player in the worst position.

But in Ethereum, the prisoner's dilemma became a cooperative game. Suppose players A and B want to do something "naughty". But before they sinned, they each deposited a million dollars (worth 1000 utility points) in a smart contract. The contract stipulates: "If I post a wrong message, my one million dollars will be destroyed." Now that the smart contract has taken effect, as long as the bonus provided by the police does not exceed one million dollars, the rational prisoner will choose Cooperation.

In search of inspiration, this list includes situations that match the prisoner's dilemma: carbon emissions, sports stimulants, tragedy of the commons and international weapons growth. Can Ethereum provide something for these areas? This seems to be credible.

Deer hunting is a typical cooperative game. We assume that two hunters can choose to hunt a buck or a rabbit. The biggest reward is that both sides can hunt the Bucks (the two hunters need to work together to successfully kill the Bucks). At the same time, hunting deer is also a more risky strategy, because if another hunter is going to hunt rabbits, then the deer-hunting people will get nothing – a safer option is to get a guaranteed return from hunting rabbits.

The ideal distortion is the same as the prisoner's dilemma. Each hunter saves a large sum of money (a value of 1000 utility points), and if a hunter chooses to hunt a rabbit, the money will be consumed.

The game distorted the deer hunting game. Green indicates Nash equilibrium. The result is the same as the prisoner's dilemma, and cooperation is the only balance now.

After the distortion, the rational hunter will insist on choosing the Bucks. In order to make the game more realistic, the Deer Hunt game also has some changes and extensions, but it can be realized by transforming it into cooperation through distortion.

In addition to distorting the game for the collective benefit, a player can also gain a competitive advantage by twisting the game. We use the widowhood game (also known as the cockfighting game) to illustrate this point.

In this game, there are two players A and B, as well as two moves, turning and going straight. The widower game is such a game: if two drivers drive to the other side, one of them is a reckless person who chooses to go straight; the other is a rational enough person who will choose to turn first. Then the reckless person is probably the winner of the game.

This process can be done by depositing a large amount of money in the chain, and if you suddenly turn, the money will be consumed. This is equivalent to telling another player that you as a "rational person" will never turn suddenly.

This is Ethereum, which is equivalent to "publicly throwing away the steering wheel."

Player A publicly distorts his actions, forcing Player B to make a choice between -1 utility, or -100 for straight. The performance of reason is: B chooses to turn, A gets reward.

There are two kinds of balance in the widowhood game: [straight, turn] and [steer, go straight]. But after the distortion, the only remaining balance is [straight, turn], and you (player A) get the most return.

In an Ethereum world, the cowardly game became a game to see who would be the first to publicly throw away his steering wheel.

Not only is it limited to profiting from distorting your own game, people can even use the threat to distort the games you are not involved in to make a profit. This kind of extortion is obviously not recognized, but we have listed it as a derivative of smart contract technology. Recall from the case of Bono & Wolpert, where the third player C knows that players A and B are about to play a game (and their payment matrix). With Ethereum, Player C can create a smart contract by clearly seeing players A and B. This newly created contract stipulates that Player A is required to pay the contract, otherwise the contract will send a large amount to Player B unless B performs a competitive action against A. In essence, Player C extorts Player A by threatening B to take a competitive action against A.

More specifically, please consider the following. Player A has an up/down action and Player B has a left/right action. At first, they were very eager to take advantage of the 10 utility points of Positive-Summer interaction (up, left).

However, Player C identifies the game that is about to be played and instantiates a smart contract, extorting $5,000 from Player A (worth 5 utility points). If A refuses to pay the contract, the contract will pay B up to $100,000 (worth 100 utility points) for him to choose "to the right."

Once Player A sees the Smart Contract, A will face two even worse choices – Composite Game I or Composite Game II. Unfortunately, for Player A, the rational choice is Compound Game II, and A will pay the extortion fee. 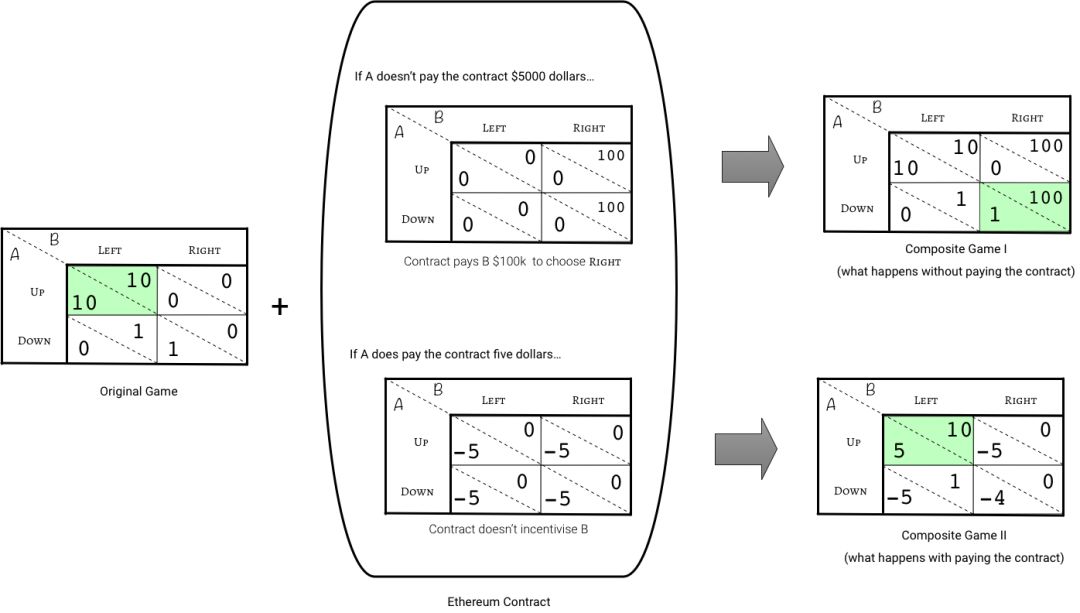 The contract extorts A's money so that the contract does not motivate B to always choose "to the right." Green indicates Nash equilibrium. This game twist is equivalent to the notorious p+epsilon attack.

One of the most surprising aspects of game distortion is that even if someone makes a promised payment, he can change the rational strategy (which is usually the result of the game), so there is no real payment. If everyone plays the game rationally, the game can be affected for free.

caveat. Ethereum payment and consumption will only be triggered by events in the chain. Obviously, this is a limitation—for example, in a prisoner's dilemma, if a prisoner can defect without a chain, the player can avoid millions of dollars in consumption. The relevance of off-chain communication varies from case to case. But the less extra-chain interaction between players, the more likely the game will be distorted. The biggest contribution to this field will be to discover the exact attributes of the game to ensure that the player's distorted actions will always be broadcast on the chain.

It is also important to note that in order to obtain personal gains and to make game distortions, the accepting player must find that the distortion has been completed; more precisely, the distortion must be a well-known fact. This restriction may be a good thing for an anti-social contract.

What will happen to Ethereum?

Technically, game distortion does not require smart contracts. However, for the Ethereum smart contract, an obvious trait is that when it comes to your jurisdiction or other related issues, it is difficult to find a reliable and fair "judge." In addition to these qualities, Ethereum (or another smart contract platform) makes all game distortions more practical by providing a deterministic, all-view, cheap, and convenient judge.

This framework provides a process for generating Ethereum startups. For example, people can follow these steps:

Really, grab this idea and put it into practice!

Special thanks to Georgios, vi and Dan for developing game distortions and draft feedback for our joint research.

Bundesbank official: cryptocurrency has not yet threatened financial stability