Nine months after the distributed cybersecurity startup Gladius reached a settlement with the US Securities and Exchange Commission (SEC), it announced today that the team has disbanded and failed to comply with SEC regulations to repay ICO investor funds.

On November 22, Alex Godwin, co-founder and CTO of Gladius, announced the dissolution of the project in the official Telegram group:

"We regret to inform you that Gladius Network LLC has ceased operations and has applied for dissolution. Despite our best efforts, the company has no funds to continue operations."

In February of this year, Gladius volunteered to report to the SEC on unregistered securities offerings, and agreed to repay its ICO investors and register its tokens as securities under the Securities Exchange Act of 1934. Gladius is also committed to submitting required periodic reports to the Commission. In response, the SEC agreed to withdraw its charges and said it would not impose additional penalties.

It is reported that Gladius Network LLC, a Washington-based cryptocurrency startup, conducted an ICO at the end of 2017 and raised a total of approximately $ 12.7 million in digital assets (about 24,000 ETH). This is also the first ICO incident handled by the SEC since 2019.

On November 6, the U.S. Securities and Exchange Commission (SEC) released its fiscal 2019 annual report. The report shows that a total of 271 securities transactions have been suspended this year, including companies involving digital assets, with the total number lower than last year's 280. The report showed that a Nevada company falsely claimed that it had partnered with an SEC-qualified custodian to conduct crypto transactions and provided SEC-regulated token products as examples. In April, due to concerns about the accuracy and adequacy of market information, the SEC suspended the trading of cryptocurrency exchange Bitcoin Generation's securities. In addition, the SEC executed 31 asset freezes due to various misconduct in 2019. According to the report, the SEC filed a lawsuit against suspected unregistered "securities" digital asset issuers in 2019 for fraud or breach of federal securities law registration requirements. To file a lawsuit or fine a non-compliant digital currency company and related personnel, the SEC states:

"These actions send a clear signal that if the product is securities, that is, regardless of the label on the product, anyone who issues, promotes or offers to buy and sell the securities platform must comply with federal securities laws and comply with Protection requirements. "

Caijing.com-On-chain financial statistics found that as of now, the SEC has filed suits against 14 companies or issuers involved in the cryptocurrency business. According to incomplete statistics, it has collected a total of nearly 35 million US dollars in fines and reached settlements with 8 indictees. 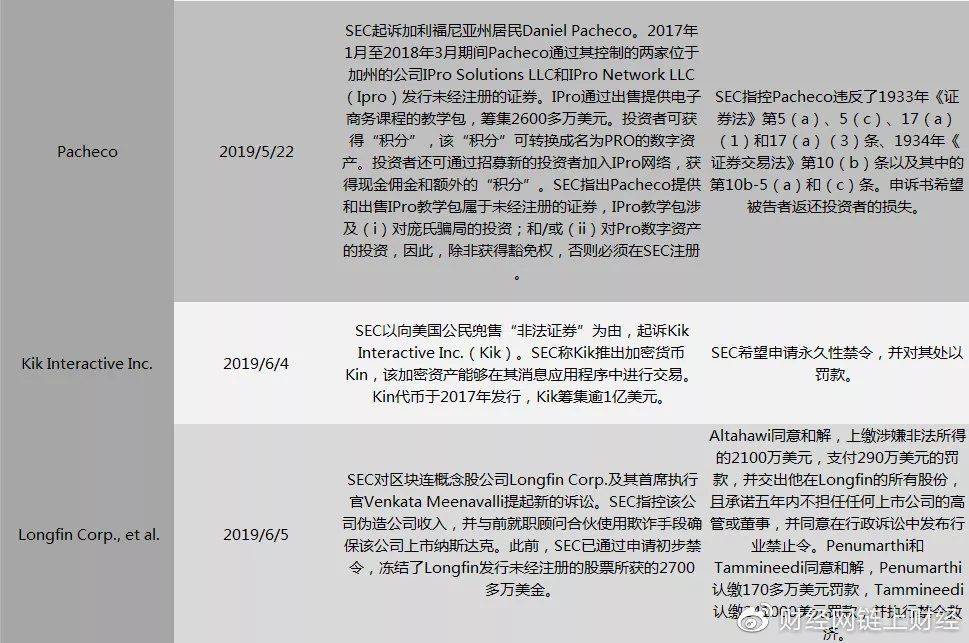 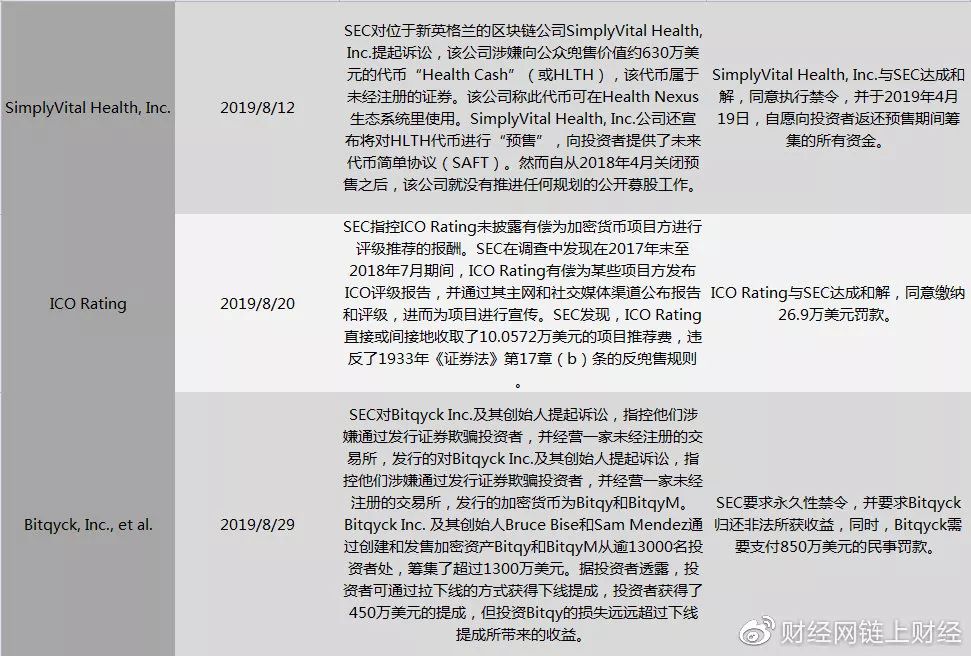 From the perspective of US supervision, the SEC's supervision of digital assets still refers to the traditional federal securities law system. As long as digital assets meet the "securities" defined by federal law, they will be included in comprehensive supervision. The SEC mainly uses the "DAO Report" to determine whether digital assets will be brought under supervision. Regarding the sale of securities or the provision of related services to U.S. citizens, that is regulated; decentralized organizations can also become the subject of securities issuance or related services and are regulated; the sale of securities or the provision of related services in the form of fiat money or digital assets does not affect Regulatory effectiveness. For market participants that violate federal securities laws, the SEC will spare no effort to deal with it, but at the same time also provide relevant market participants with the opportunity to re-compliance through rectification; the SEC encourages technological innovation that is conducive to the capital market and will pass Finhub's “New Strategic Center for Innovation and Financial Technology” is involved in various fintech innovations. Securities digital assets, as a digital upgrade of traditional securities, are expected to receive continuous attention.

In addition, the SEC in the SimplyVital Health, Inc. case sent a clear signal to the case involving a future simple token agreement (SAFT) that the issuer of the "pre-sale" token needs to return to investors the funds raised during the pre-sale All funds have insufficient grounds to defend with SAFT.

Earlier, Caijing-Chain Finance reported that Telegram submitted an argument that Gram tokens are not securities, and stated that the SEC's suspension of its blockchain platform, Telegram Open Network (TON), was baseless. Telegram claims that "no securities were issued to the public through an ICO." The $ 1.7 billion it raised was raised through the Future Token Simple Agreement (SAFT) framework. Telegram has signed a private purchase agreement with some private equity investors, which stipulates that Gram can only be acquired after TON is launched.

Brian Quintenz, a member of the Commodity Futures Trading Commission, has publicly stated that the "simple agreement for future tokens" (SAFT) concept is that crypto tokens provided by pre-sale are "transformable." "From the financing point of view, they may be securities in the beginning, but at some point in time, they may soon become commodities," he said. Because of this variability, SAFT issuers and investors use it as a bet to bet on whether the SEC or the court will test the token as a security. In response, the SEC said the argument was not convincing.

Deutsche Bank has laid off tens of thousands of people, and Bitcoin has been fired again. What happened?

In the next 6 months, an Australian company will submit a Bitcoin ETF application to the country’s stock exchange