Fidelity Digital Assets, Fidelity's crypto division, recently announced that the New York State Department of Financial Services has approved its application for crypto trust service Fidelity Digital Asset Services, LLC to operate a trust business in New York State. The move will expand its potential customer base to compete with hosting businesses that already have operations in New York, such as Bakkt.

It can be seen that the world's largest professional fund company has gone one step further in the blockchain field. Not only that, Interchain Pulse is concerned that companies such as Pioneer Group, Goldman Sachs Group, and JP Morgan Chase are also actively deploying the field of blockchain and crypto assets.

In contrast, China's fund companies are relatively conservative and rarely intervene in the blockchain field. Interchain Pulse is concerned that this may be related to China's definition of digital assets and the innovation supervision of domestic fund companies.

Bank of China, securities, trusts, and insurance companies have successively entered the blockchain

Among them, the main force in cross-border payment is banking institutions. At present, from the People's Bank of China, to large joint-stock commercial banks, and city commercial banks, they are gradually promoting the application and practice of blockchain. This can be seen from the list of blockchain information service filings released in March and October this year. Six batches of filing lists have involved ICBC, Ping An Bank, Zhejiang Commercial Bank, Jiangsu Bank, Weizhong Bank, and Suning Bank. Bank, a total of 14 blockchain services.

Earlier, the pulse of the mutual chain was also counted in the article "Decision on the Blockchain Financial Battlefield Chinese Financial Institutions Action Map". As early as 2017, 12 banks have launched blockchain applications in different use cases. 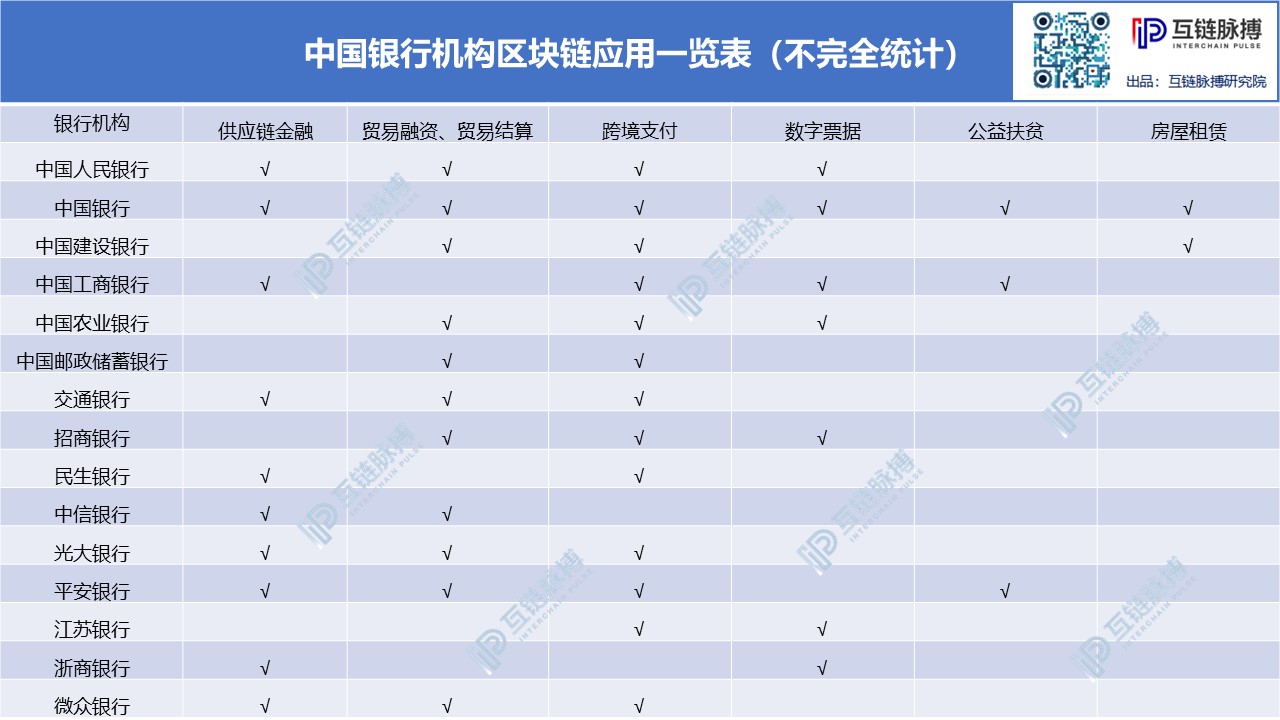 Since September 2017, Tianfeng Securities, Debon Securities, GF Securities, Huatai Securities, etc. have successively launched related products. According to the inter-chain pulse statistics, there are currently at least 7 single-blockchain ABS products on the market.

In the field of trust, there are also companies that promote the development of blockchain ABS products. For example, on February 22, Yunnan Trust uploaded the underlying consumer financial assets into the chain to the asset management ABS blockchain system of China Merchants Bank.

At the same time, trust companies have the characteristics of blockchain technology to develop more business. Wanxiang Trust has access to the digital asset depository and custody function. By storing key materials and information in specific businesses on the blockchain, it improves the thoroughness and security of investors' digital assets.

On the other side of the United States, not only banks, securities, trusts, and insurance companies are promoting the development of blockchain. Fund companies also have a corresponding layout.

A few days ago, before the New York State Department of Financial Services approved Fidelity's application for crypto custody services, Fidelity had already begun exploring the direction of the blockchain. In 2013, Fidelity launched the blockchain incubator and classified it as a part of the Fidelity Application Technology Center. Since then, it has continued to practice in the field of digital currency development.

In March 2019, the hosting service was officially launched. Fidelity Digital Assets announced on its official Twitter that it has launched a Bitcoin custody service to a group of "selected qualified customers." Its solutions will also focus on the needs of hedge funds, family funds, pensions, endowment funds and other institutional investors.

Not only is Fidelity, the Pioneer Group, the largest fund management company in the United States, also entering the field of blockchain. In May this year, Pioneer Group is using blockchain to help manage data for some of the most widely used financial products, including its largest mutual fund, a stock market index fund with a total market value of $ 800 billion. At the same time, there are reports that Pioneer Group may be the first large financial institution to use blockchain as its core service.

In addition, according to the news in August 2018, Goldman Sachs is considering providing custody services for crypto funds, and also said that it is conducting research on related services; it also invested with former Goldman Sachs partner and billionaire Mike Novogratz in cryptocurrency custodian BitGo Holdings Inc. $ 15 million.

It can be seen that the fund companies at the head of the United States are all exploring and researching in the field of blockchain and crypto assets, and have gradually achieved landing.

Chinese fund company stops blockchain or is stuck in regulation

In December 2016, China's Huiyin Group has established a Bitcoin investment fund called "Huiyin Blockchain Investment", with a managed capital scale of US $ 20 million.

In December 2017, Penghua Fund launched its own technology platform, A plus platform. The A Plus platform has invested in big data and quantitative technology applications, intelligent investment advisory, blockchain and other directions. Through the platform, it fully integrates its professional asset management capabilities with Fintech's technological innovation capabilities to provide investors with accurate wealth management solutions. Program.

But the above practices were promoted in previous years, and the layout is not deep.

The pulse of the inter-chain further concerns, and the reasons that lead to the differences in the development of blockchain business between Chinese and American fund companies are primarily policies.

Another reason is that the innovation business of domestic fund companies has encountered a blank period. The domestic fund industry practitioners revealed to Interchain Pulse that, first of all, the supervisors actually hope that the fund industry will do a good job of active equity management and have stricter control over innovative products. For example, commodity futures funds are approved after 5 years of research and development, and innovative varieties such as blockchain-based ABS will be more difficult to obtain.

Secondly, due to the excessive innovation pace of domestic fund companies, some development chaos has occurred, and regulatory intervention has led to the suspension of some innovative projects. Fund companies are also more cautious in terms of innovation and development.

Mutual Chain Pulse is also concerned that in recent years, supervision has indeed frequently attacked the fund platform, comprehensively blocking various hidden risks that may arise during the operation of the fund sales platform. In 2017 and 2018, supervision continued to be serious.

The beginning of regulation is just connected with the stagnation of the development of the blockchain, which may lead to the reason why domestic fund companies stop the blockchain.

Ji Xiaonan, former deputy head of the Central Inspection Team: There are reasons to believe that the development of China's blockchain will take it to the next level.

Analysis shows that since last year, cryptocurrency fraud on Twitter has almost doubled

Analyst: Although Bitcoin is unlikely to rebound in the short term, it is still bullish in the long run.