In a deteriorating market environment, the public chain Algorand (Algo) ushered in its first traditional corporate customer. On November 22nd, London-based World Chess announced that it will issue and sell "secure tokens" on the Algo public chain this week, which is expected to be equivalent to 4% to 6% of the company's shares.

In June of this year, Algo relied on the background of its technical founding team, and projects such as Polkadot were known as the third-generation public chain. It is well-known and has been “arranged” by mainstream digital asset trading platforms.

In the past six months, the Algo team released the Algorand V2.0 agreement under the new mainnet solution, and also successfully passed the financing certification of some Arab countries to facilitate local institutions to use the Algo network for economic transactions.

However, most of the time, this team known for its strong technical ability seems to be busy "fire fighting", and has successively introduced "auction shutdown, early refund, Staking lockup" and other measures to prevent the total market value of assets from falling. However, from the current market performance, the effect is not significant.

Over 90% drop during the year, community downturn

You may not have heard of Algorand (Algo), but if you refer to the previous "Dutch auction", it may remind you of a little bit of memory. If you mention the "Turing Award-level fund disk" again, I believe many people will Think of this project, which was donated by Chinese currency people as "Two Dogs".

In June of this year, the main online website of Algo completed the auction of the first batch of 25 million Algo Tokens at a price of US $ 2.4 within 4 hours. The market value of the circulation once rushed to the top eight in the world, and it was close to the mainstream of Ethereum and EOS. Public chain.

One of the reasons for Algo's popularity comes from the glorious resume of the founder, Professor Mikali, a 65-year-old Italian who is a professor at the well-known institution MIT and also a 2012 Turing Award winner.

However, two days after the auction ended, Algo came up with a "three daily strikes", and in the following days it plummeted. 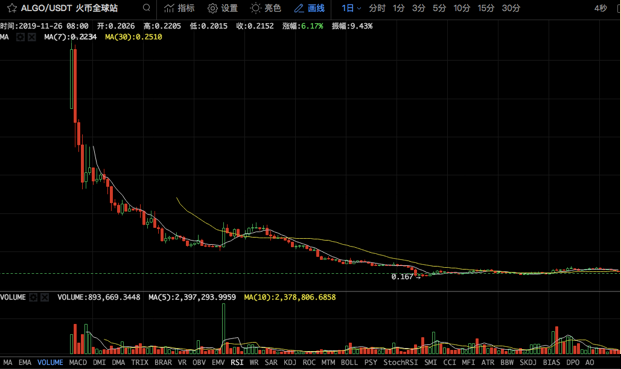 Two days after the first round of auctions, Algo prices have hit three consecutive times

On November 22, Algo welcomed the first traditional enterprise customer of its public chain network. London-based World Chess announced that it will issue and sell "securities tokens" on the Algo public chain this week, which is expected to be equivalent to 4% to 6% of the company's shares.

World Chess is a company that owns commercial rights to the World Chess Championship. The company's CEO Ilya Merenzo told the Financial Times last week that the future batch of Tokens will be listed on the Alternative Investment Market (AIM) of the London Stock Exchange (lse) in 2020. "Most of the funds raised will be used to grow the World Chess business."

Some commentators believe that if World Chess Token successfully enters the securities market, it will mark the birth of the first security token in the cryptocurrency field. This attempt is encouraging for the blockchain industry.

For Algo, the underlying public chain that provides blockchain technology services, World Chess Token may allow Algo to prove its usefulness, or value. However, from the current market performance, there is no feedback yet.

In the Algo official telegram group, the community seemed to have little interest in the news of World Chess Token. After the news was released, only a few people discussed it.

Turing Award winner project was "grabbed" by the exchange

Different from the market enthusiasm at the beginning of the project, the outside world's attention on Algo has cooled down a lot in the waning market.

Half a year ago, Algo took the star team to the blockchain world. In addition to the Turing Award winners, the rest of the founding team were mostly scholars from Harvard, Tsinghua and other well-known institutions. Once Algo's mainnet was launched, it was sought after by the mainstream market trading platform. On June 19 of this year, Huobi, Binance, and OKEx successively opened Algo trading pairs one day after the Algo mainnet was launched. Huobi will set the time to open trading services at 3 pm on the 21st, ahead of 10:30 am, showing the project's popularity.

At the technical level, it claims to find a technical bottleneck that breaks through the "impossible triangle problem" of the blockchain.

The "impossible triangle" refers to the fact that blockchain projects cannot take into account the three requirements of Decentralization, Scability, and Security. The industry generally believes that this is a basic problem that blockchain technology is difficult to enter the commercial field on a large scale.

Algorand Chief Scientist Chen Jing previously said in an interview with the media that Algo's TPS performance will be comparable to VISA in the future. In order to solve the problem of decentralization, it introduces a self-selection mechanism. Through cryptographic lottery technology, Algo randomly selects consensus nodes among the users. It is impossible to predict in advance who will be selected, thereby avoiding the tendency of centralization.

However, there are not a few public chains dedicated to solving the "impossible triangle" problem. Why is it so hot? In addition to the team halo, its price "bottom guarantee mechanism" is a good marketing strategy.

Algo is the first digital asset in the cryptocurrency circle to adopt a Dutch auction. This method is also known as a "sale auction". The auction price goes from high to low. When the latest unit price is equal to or exceeds the number of auctions, the auction ends. Everyone closed at the lowest bid.

Algo's guarantee mechanism promises that if the auction price exceeds $ 1, investors can choose to clear at 90% after one year, and the time is 7 days after 1 year. Algo subscribed at the auction stage can apply for clearance. In the first round of auction, Algo closed at a price of $ 2.40.

With this clause, the equivalent of a one-year put option is officially given to the buyer, with a loss limit of 10%.

At that time, Algo's "bottom guarantee mechanism" greatly boosted the enthusiasm of participants in the highly volatile and speculative currency circle. The first batch of 25 million Algos sold for a high price of $ 60.4 million in 4 hours. It is no wonder that various exchanges are competing to go online after the auction.

In the past six months, Algo's main project promotion was the on-chain governance model and a new proposal for the mainnet, and released the Algorand V2.0 agreement. In addition, its business promotion has also made a breakthrough. In October, it successfully passed Shariah-compliant financing certification, allowing local institutions to use the Algo network for economic transactions.
Compared with the progress of the project, investors obviously pay more attention to the price trend of Algo, which has become the most headache for the project team in the past six months, so that they have to allocate time and energy to the maintenance of market value.
Browsing Algo's price trend in the past six months, the decline is its main theme. The auction method that was once widely sought after by the market seems to have hidden dangers from the beginning.
On June 26, one week after the first auction. The Algo Foundation issued a warning, saying that it is currently found that the behavior of some early supporters may bring uncertain risks to the development of Algorand. In particular, including selling, short selling and similar actions may damage the performance of the network, affecting Project credibility.

Chen Fangfang, the person in charge of the operation of the Algorand Foundation, said that if an investor's actions cause significant risks to the project, the foundation has the right to terminate the investor's continued participation in the Algorand project.

Analysts believe that the "early supporters" here actually refer to private equity investors in the Algo project. According to the official website of Algo, in the initial stage of the project, a total of 32 institutions, including CMB International and Melco Capital, received investment from them. Their cost was only $ 0.05, the position was locked for 2 years, and one-third of 730 was unlocked every day.

The private placement price was $ 0.05, but the high price of $ 2.4 was sold in the first round. In theory, private placement participants will make 48 times more money on Algo. "As Algo's private equity investors, they are motivated to participate in the auction and raise the price of the auction, so as to make more profits. Therefore, the price of the currency plummeted in the secondary market before allowing Algo to sink into public opinion."

From the subsequent market trend, the warning did not work, and the price fell again after a brief correction.

Whether you buy from the secondary market or participate in the Algo auction, you can't escape the fate of buying a quilt. In desperation, the team ’s original idea of ​​“the auction lasts for 5 years, 2 rounds per month, 25 million per round, and an estimated total auction of 3 billion Algo Tokens” was eventually suspended after 2 months.

Four days later, the Algorand Foundation announced that it would suspend Dutch auctions this quarter. As of now, the auction is still at a standstill. Instead, it officially launched the Stake Mortgage Reward Program, which allocated 200 million Algos as collateral rewards to the entire community.

Obviously, the team's hope of "fire fighting" is pinned on the lockup of the secondary market, but looking at the trend, the efficacy of this Stake mortgage reward plan is also average.

Now Algo has ushered in the first traditional enterprise customer of the public chain network, and it has begun to open up in applications. Unfortunately, there is little response from the community. It seems that the confidence drop caused by the 90% plunge is not small, and another bad news is that the entire market is getting cold.

What do you think of the team background aura of the project?

IMF survey: People are more willing to pay for lunch in cryptocurrency in the next five years

Director of OCT Group: With the support of 5G Internet of Everything technology, blockchain and other technologies are accelerating the transformation and upgrading of China's economy 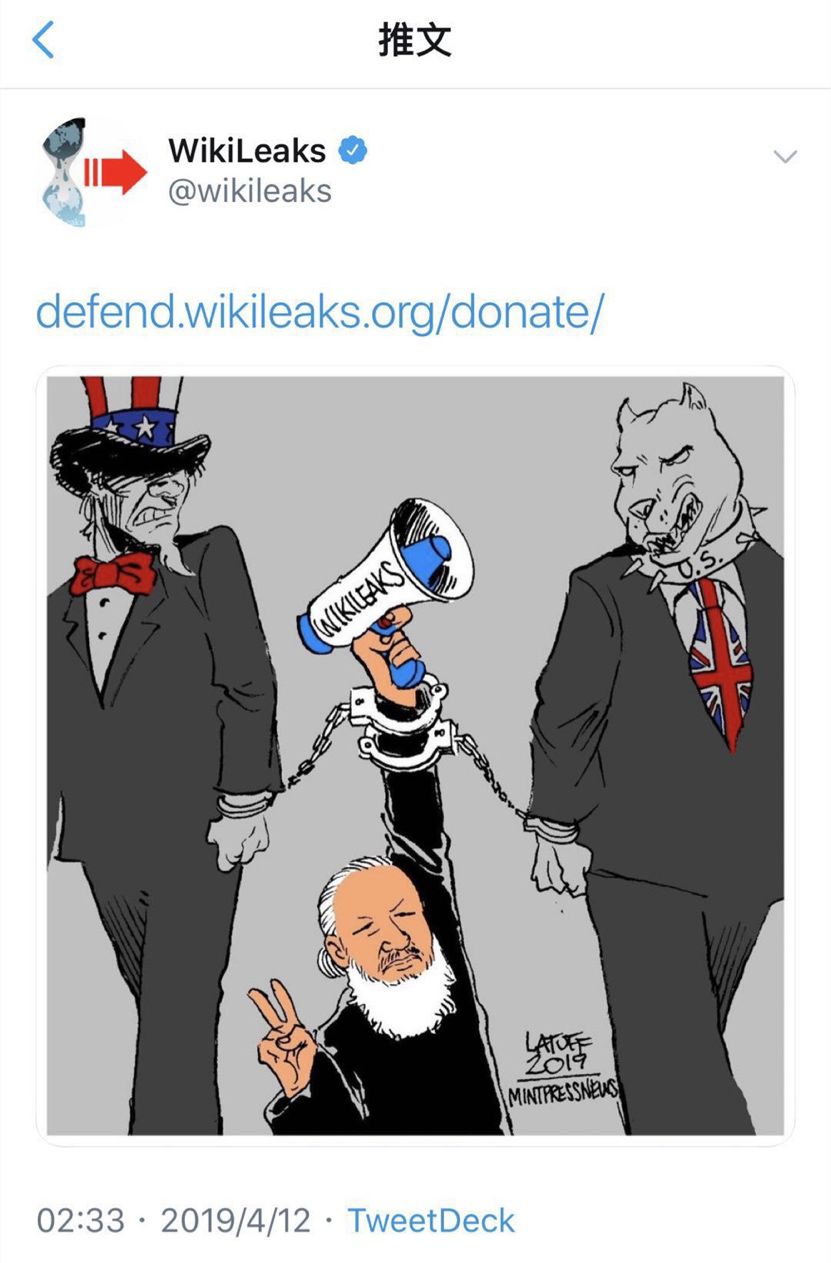 CoinDesk Research Director: Bitcoin volatility is unlikely to weaken in the short term