After the technology companies have developed a clear path for blockchain governance for the government, the city government began to try to build its own underlying platform.

With Xiong'an and Hangzhou as representatives, the government has begun to explore a new blockchain city governance model-after completing the previous part of the technical work, the technology company will no longer participate in subsequent data operation and use. Babbitt provides technology for Hangzhou's "Government Service Chain", but the operator of the system is the Municipal Data Resources Administration, and its construction is considered to be that the Hangzhou Data Resources Administration initially has the ability to build blockchains. Sign.

From point to surface, many places have started to build their own blockchain city governance underlying platforms

Compared with applications in other fields, government blockchains are dominated by government voices, and landing is less affected by policies and other factors. Inter-chain pulse statistics show that in the first half of 2019, there were 83 government applications, accounting for 20.3%.

On the basis of a large number of government affairs landing projects, comprehensive livelihood and smart city construction (such as transportation, water affairs, etc.) projects, the government has a practical foundation for building a blockchain underlying platform.

Incomplete statistics on the pulses of the interlinks. Since the end of 2017 in Xiong'an New District, Hebei Province, 10 government-related blockchain applications have been launched, and the service targets are mostly in the field of people's livelihood.

In the future, Xiong'an will launch a personal points system and use blockchain technology to reward citizens for their good performance. And this time Xiong'an self-built the underlying technology platform of the blockchain, or coordinated these projects, and laid the blockchain on all aspects of urban construction. 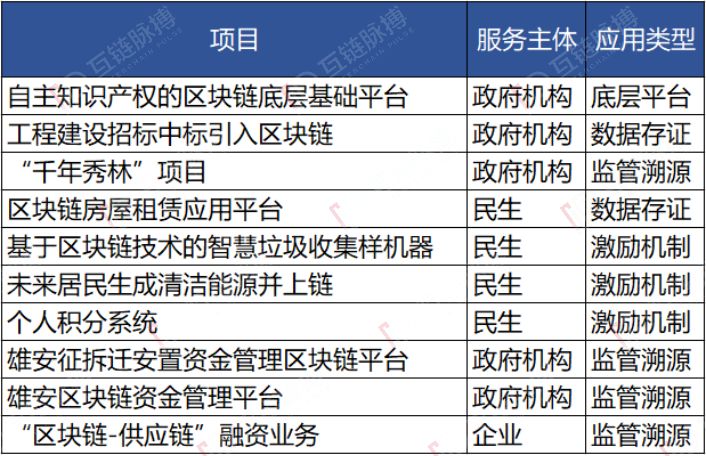 At present, society has basically reached a consensus view on blockchain-blockchain is infrastructure. In the future, the underlying infrastructure of the urban governance blockchain may only have one or two platforms on which many applications can be built.

Like Xiong'an, Hangzhou and Loudi are also aimed at integrating business. The autonomous and controllable “government service chain” led by Hangzhou Data Resources Administration has entered the trial operation stage.

The development of Hangzhou blockchain government affairs started late, but it is catching up this year. Hangzhou has built 3 government affairs projects during the year. In March 2019, Hangzhou Metro can issue electronic invoices based on blockchain technology; in May, the Zhejiang Blockchain Notarization System was officially launched; in June, the Hangzhou Internet Court launched a “5G + Blockchain” network-related implementation new mode.

At present, the "Government Service Chain" has initially set up 4 blockchain nodes, adopting a "one-master, multi-sided" technology architecture, and began trial operation in May this year, with a total of more than 3 million blocks in 6 months. It is reported that the platform can basically meet the government's security and efficiency requirements for the system, and actually supports trusted application scenarios.

"With the increasing number of blockchain application landing projects, an ecology was finally formed on the integration of a platform." Su Di, vice chairman of the Loudi CPPCC, said in an interview with Interchain Pulse that Loudi City develops the blockchain industry and the government Provide scenes, data, and platforms for project landing, attract project landing, and then integrate, "then the entire Loudi has become a digital city based on blockchain.

At present, Loudi City's unified urban-level blockchain basic platform is provided with technical support from FunChain Technology. Loudi City Government can open it to other enterprises to build a blockchain industry ecology.

"Bing is divided into three paths", three modes of the blockchain city race have been run

According to the government's participation and openness in blockchain city governance, development can be roughly divided into three paths. First, in the foregoing, the government can build the underlying platform or own the intellectual property rights of the project, and the government can lead the open data. The second is to "outsource" the project to the technology company for construction management, but the use and opening of the data may face more serious problems. Test; Third, join some existing inter-city blockchain alliances, such as the BSN network, and the data will be more open.

The government built its own low-level platform. First of all, the various types of data accumulated by the government for many years have less resistance to the on-chain, and the project landed more quickly. The government has the leading power, and to a certain extent, it can better coordinate and coordinate the use of resources. For example, Loudi is a government-led open resource that can attract more projects to land. But this model also requires the government to form a corresponding technical operation and maintenance team, which is essentially the responsibility of a social enterprise.

Beijing launched a big data action plan in 2018 and cooperated with Huawei. The blockchain catalog was officially launched in October this year.

On November 9, Zhang Xiaojun, the person in charge of Huawei's blockchain, said that the directory chain was launched for a week, and more than 44,000 data were uploaded to the Beijing Municipal Bureau of Public Security (Bureau of Public Security, Municipal Taxation Bureau, Municipal Medical Insurance Bureau, etc.). Data items, more than 8,000 responsibility directories, more than 1,900 information systems, and 2.7T data. In the future, information on 16 districts and counties will be accessed (3 companies have been connected), and inter-government data sharing authority management will be opened to resolve incomplete directories. Directory data two skins, and the problem that the directory is randomly changed.

Behind the massive on-chain data is a year of hard work by the Beijing government department.

Since 2018, the Beijing Municipal Bureau of Economics and Information Technology, the Municipal Committee of the CPC Committee and the Municipal Finance Bureau have led various government departments to sort out and set up a “Responsibility Catalog” one by one, corresponding to the formation of a large “data catalog” of the city. Over a year, the Beijing Blockchain Directory linked the responsibilities, directories and receipts of all 53 departments to build new data sharing rules.

The operation effect of Beijing's directory chain points the way for the construction of a blockchain city. But not all local governments now have the resources, technologies, and capabilities to reintegrate the city's data, and can restructure data sharing rules. At the moment, only Beijing can do this.

On October 15, the National Information Center, China Mobile Communications Corporation, China UnionPay, and others jointly announced in Beijing that the Blockchain Service Network (BSN), which was jointly designed and constructed by six specific units, was officially released for beta. BSN is planned by the National Information Center. China UnionPay and China Mobile use relevant blockchain technology and existing network resources and data centers for independent research and development and deployment. It is a national blockchain that spans public networks, regions, and institutions. Service infrastructure platform.

The design vision of BSN is ambitious, and the specific implementation effect cannot be judged at present. However, before BSN, there were governments and companies that started from a single perspective to build a cross-city basic platform.

On October 12, Chen Chun, an academician of the Chinese Academy of Engineering, stated in a public speech that the application cases of the National Provident Fund Center have achieved remarkable results. The Provident Fund Data Sharing Platform of the Ministry of Housing and Urban-Rural Development has connected with the Provident Fund Centers in 491 cities across the country, with more than 50 million pieces of data on the chain.

The success of the provident fund data sharing platform also shows that there is a possibility of on-chain data sharing and collaboration between cities and business connections, and there are also a wide range of application scenarios.

It is conceivable that with the expansion of the possibility of blockchain application and the demand for new technologies in the construction of smart cities, the underlying blockchain platform that cities will build in the future will coordinate related blockchain projects and may form cities and cities. The underlying platform shared between. But how to build this platform, is it built by local governments, or is led by social enterprises, or even directly established inter-city alliances, spread from face to point? It is still unknown, and the three modes have their own advantages and disadvantages. It is difficult to tell who can go further.