On November 27, the official Slack of Protocol Labs using GPU to "mining" news was revealed, which was interpreted by many "Title Party" as the "minded army" of CPU miners and suffered a "disaster".

When I first saw this news, I didn't care too much, because about half a month before I heard that the government was discussing the plan to join the GPU, but it needs to be emphasized here that the GPU is just an add-on, not a Replace CPU. As shown in the figure below, the official also explained that each machine only needs a GPU, and more GPUs will not bring actual revenue increase.

I did not expect that this news would be over interpreted by some unknown media, so I think it is necessary to explain the mining principle of Filecoin in order to listen to it.

The first thing to emphasize is that Filecoin is different from other decentralized storage projects. In other projects, users interact directly with the platform, and users do not know which miner the data is stored in. Filecoin provides a platform similar to Taobao. Users can choose miners for data storage, that is, Filecoin uses directional storage. As shown in the figure below, when storing files, users can independently select the miners responsible for storage. 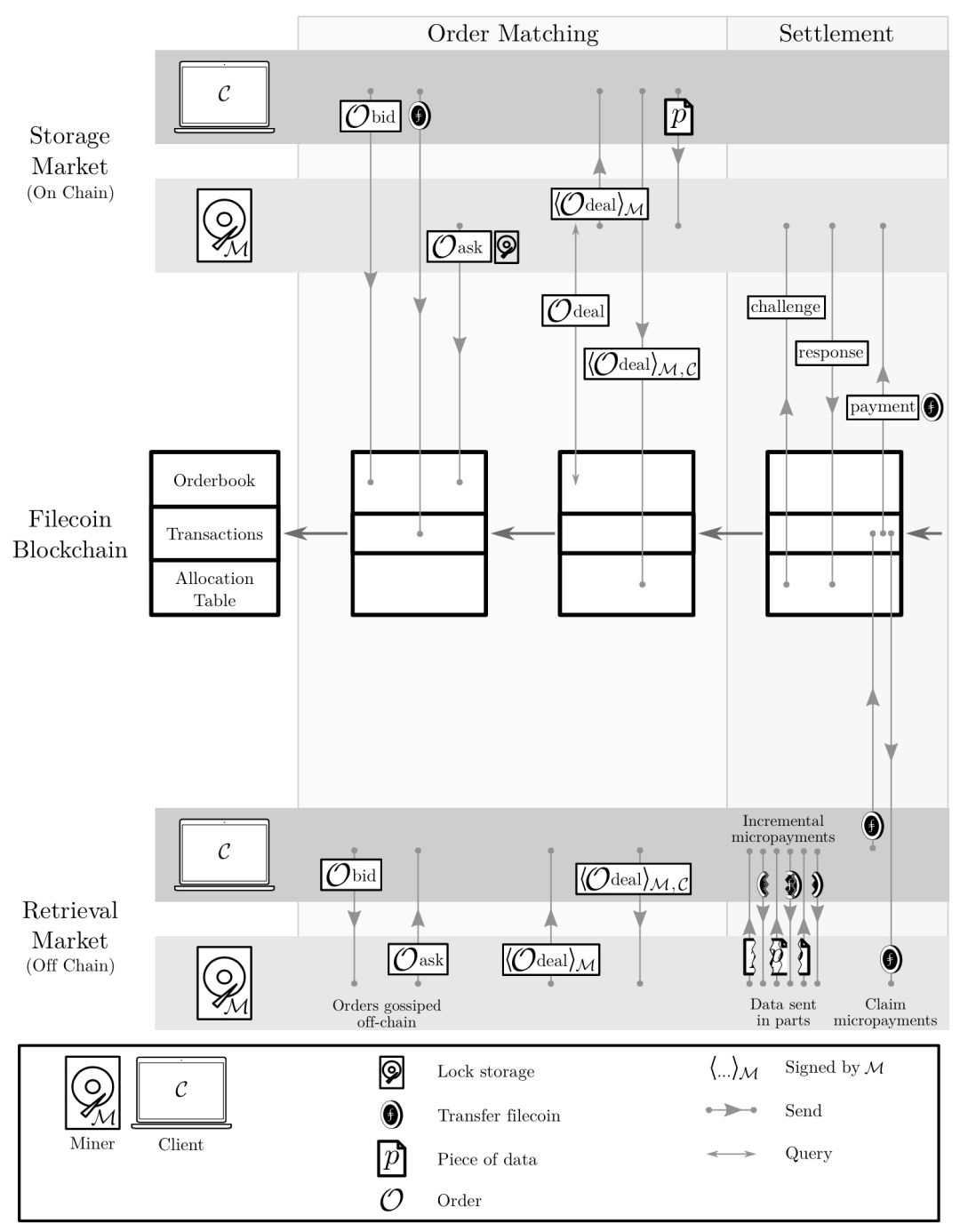 As shown in the figure above, the Filecoin architecture includes three parts, namely the storage market, the Filecoin blockchain, and the retrieval market. The corresponding types of miners are storage miners and retrieval miners, and repair miners may appear in the future. As the name suggests, storage miners are mainly responsible for storing files and maintaining Filecoin's blockchain. Correspondingly, the benefits of storage miners include storage fees, block rewards and transaction fees. The main task of retrieving miners is to retrieve data, and the profit obtained is the retrieval cost. In the early stage of the Filecoin mainnet, due to the limited storage capacity, there is not much retrieval demand, but as the amount of data increases, the retrieval revenue may be higher than the storage revenue. The source of income of various mining tool bodies is shown in the following figure:

Filecoin uses the EC (Expected Consensus) consensus, which can be simply understood as a revision of the PoS consensus. In the PoS consensus, the equity represented by the mortgage token determines the probability that the miner will obtain the packaging right. In the EC consensus, this kind of Equity has become effective storage, that is, the amount of effective storage determines the probability that a miner will obtain packaging rights.

What is effective storage? In simple terms, effective storage is the stored data that is ultimately generated after running PoRep (Proof of Replication) and PoSt (Proof of Spacetime). PoRep and PoSt are the characteristics of Filecoin, and their main role is to prevent the mining work from malpractices or launch some malicious attacks. PoRep is also called copy proof, and its main role is to prove to another node that it has stored a copy of the corresponding file. PoSt is also called spatio-temporal proof. Its main function is to prove that a node has stored the corresponding file within a certain period of time. PoSt is executed according to a certain period. The main purpose is to prevent miners from deleting data after the proof is completed.

4 Is the GPU solution really used to replace the CPU solution?

In fact, in the early days of Filecoin's launch, most miners' income did not come from storage orders, but block rewards. Therefore, most miners choose to fill their hard disk space with junk data as soon as possible to obtain as much effective storage as possible. The ideal situation is to quickly turn all their own storage space into effective storage as soon as possible. When the storage order is generated, the original junk data is gradually deleted, and the corresponding order data is stored.

The reason why there are so many misunderstandings is mainly because many people do not understand the Filecoin mining process, and take this process for granted with bitcoin mining. Bitcoin mining has gone through several stages of CPU, GPU, FPGA, and ASIC, so many people think that after using Filecoin's GPU solution, the previous CPU solution will be unusable. What's more, they believe that Filecoin will produce ASIC mining machines. .

What does the official GPU solution mean? In fact, the main reason is that Protocol Labs has modified the PoSt algorithm. The PoSt calculation must be completed within one block cycle to obtain the packaging right. At this time, the performance of the general CPU cannot meet this condition, so the GPU is required to perform Internally accelerated operations. Unlike Bitcoin mining, which evolved from CPU to GPU, the main reasons for Bitcoin's evolution from CPU to GPU are that GPUs run faster than CPUs, have better parallelism, and can perform more Hash operations at the same time. Filecoin currently uses GPUs only because the calculation speed of GPU's PoSt is faster than that of CPU, and PoSt only needs to calculate once in a block cycle to obtain the packaging right. There is no such thing as GPU instead of CPU. Protocol Labs also officially stated that adding more GPUs does not increase revenue. On the contrary, if one GPU can be used for multiple machines, it can reduce costs to a certain extent.

In simple terms, Filecoin mining is not simply a matter of improving CPU performance to achieve higher mining returns. Filecoin has a very complicated calculation process. At present, the GPU cannot play a significant role in other aspects of the process, and compared to the cost of the GPU is higher than the CPU, so it is not cost-effective to use a pure GPU solution. At present, the GPU is more of a supplement to the existing solution than a replacement. Filecoin's block reward mainly depends on effective storage. Therefore, those who participated in the early stage will have certain advantages and there will be a certain Matthew effect. However, after Filecoin miners have turned all their own storage space into effective storage, they will be packaged. The probability of weights will be continuously diluted with the increase of the effective storage capacity of the entire network. At this time, there will be no higher requirements for performance. Therefore, after the storage space is saturated, the demand for performance will further decrease. In the long run, the need for hardware performance optimization is not strong during Filecoin mining.

Jia Nan Technology Zhang Nanyu: R&D in the field of blockchain chips has a great impact on the entire semiconductor design industry