In 2015, Ethereum ushered in a new era in the blockchain world: the era of tokens.

In a broad sense, "token" represents a utility or asset and is usually issued on a blockchain. In contrast, "coin" refers to a cryptographic asset that is native to a chain and is mainly used as currency ("coin" and "token" are common in some cases, but in the context of this article Is different). For example, BTC and ETH belong to the coin category, while MKR and BAT belong to the token category.

Before the birth of Ethereum, the concept of digital tokens existed in various forms. For example, "colored coins" can use BTC to tokenize an item without issuing a new asset. This process is called "coloring", that is, using the OP_RETURN opcode to mark a particular coin. Another way is to agree to use Satoshi (the smallest unit of BTC) to represent a certain asset in the real world.

However, Ethereum has adopted a completely new way to create tokens, which is more user friendly. With a simple smart contract, anyone can easily issue their own token on Ethereum.

Soon, thousands of tokens were released on Ethereum. With the skyrocketing types of tokens, it is urgent to solve the problem of token standardization to ensure that different types of tokens can be interchanged. ERC-20 implements a standard interface that can make transactions between different ERC-20 tokens easier and also make it easier for wallets and dApps to integrate ERC-20 tokens. In early 2018, ERC-721 was also adopted as a formal community standard, specifically to represent non-homogeneous tokens with digital scarcity (for example, a crypto cat or a unique cryptographic artwork).

Since then, the evolution of Ethereum tokens has continued to accelerate.

One way to measure the value of a token is to compare the market value of the native currency (ETH) on Ethereum with the total market value of all tokens published on the platform. As Chris Burniske proposed, we call it the "wide network value / token value (NVTV)" ratio. 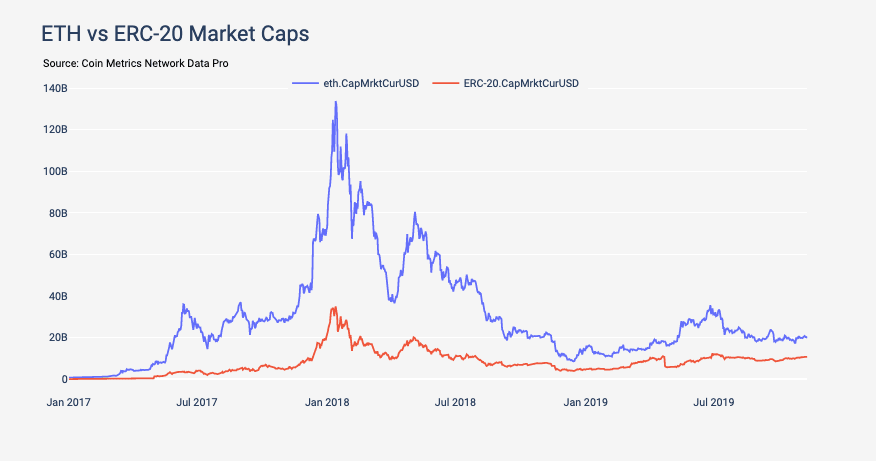 Judging from the realized market value, Ethereum's NVTV ratio has been steadily declining, and has now fallen to 2.57, a record low. It can be seen from the decreasing NVTV ratio that the ERC-20 token is steadily approaching ETH in terms of valuation. 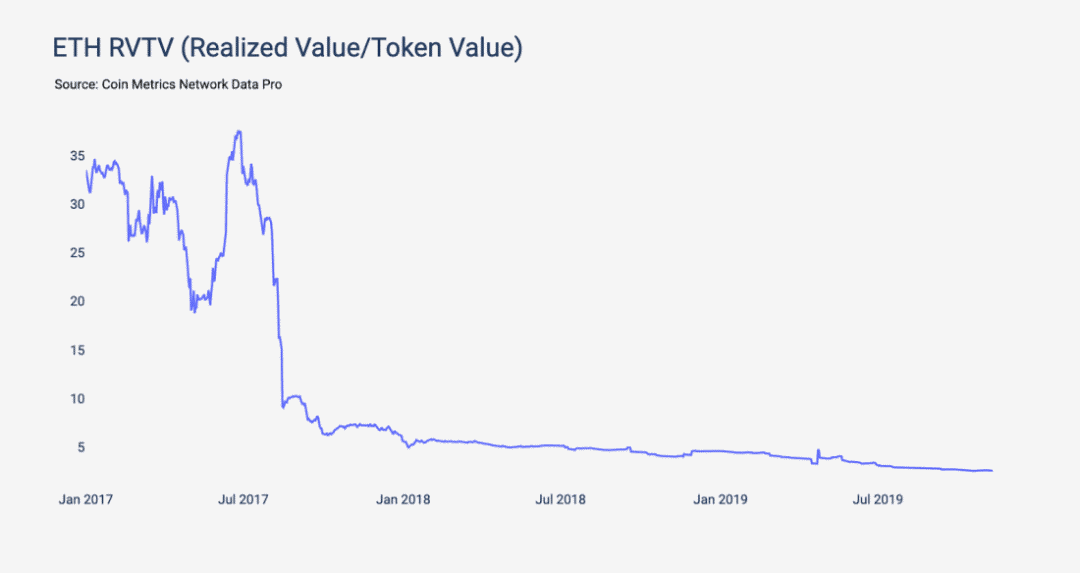 Since mid-2018, this part of the growth has come mainly from a certain type of ERC-20 token: stablecoins.

The following figure reflects the market capitalization of utility tokens, exchange tokens, and stablecoins. We use a simple method to abstractly classify these tokens; however, other classification methods can be used.

"Utility tokens" are a type of "ensure that buyers can use certain products in this network to fund the entire network (the definition is taken from BitcoinWiki)". Utility tokens are usually issued during the ICO boom, used to raise funds, as a payment method in the ecosystem, to obtain a certain service or function, or to participate in activities such as voting.

"Exchange token" is a type of utility token created by a digital currency exchange (such as Binance's BNB token). Exchange tokens are usually used to raise funds and used to deduct some transaction fees.

A "stable currency" is a type of token that anchors its value to another asset, usually a fiat currency such as the US dollar. By most measures, Tether is currently the largest stablecoin. Other stablecoins built on Ethereum include DAI, USDC, PAX, and TUSD.

Although the exchange token development momentum is strong in early 2019, BNB changed from the ERC-20 version to the mainnet version (Bin's own mainnet) in April, which caused the market value of exchange tokens on Ethereum to plummet.

The following figure shows the market share of each of the three types of tokens. For each category, the list of assets we have selected is shown in the footnote below. 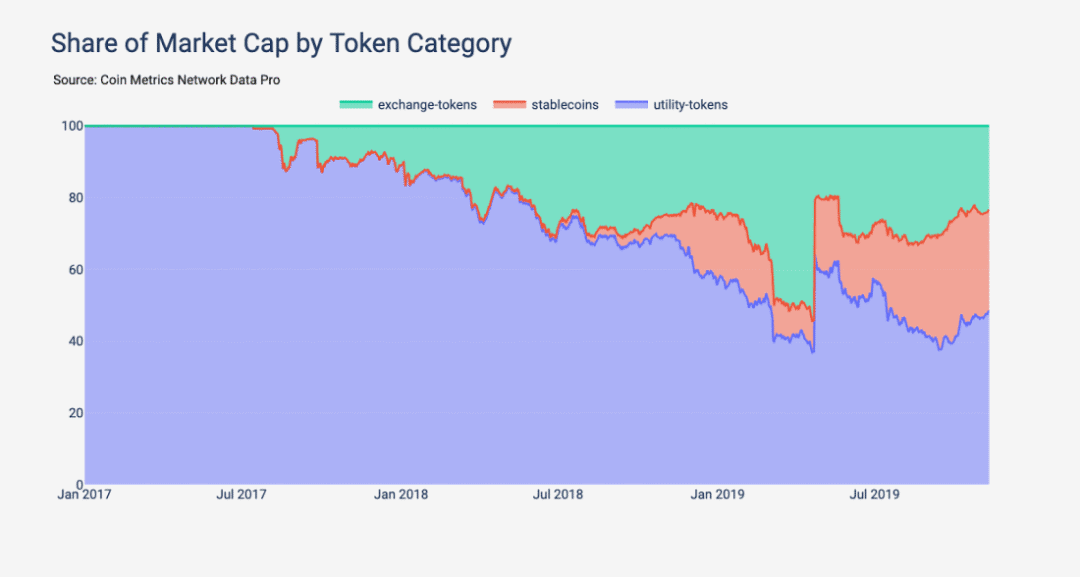 In addition, most of the growth comes from a stablecoin, Tether (USDT).

As we mentioned in the previous article on the state of the network, Tether is spread across multiple different protocols, the biggest two of which are the Omni protocol (built on the Bitcoin blockchain) and the Ethereum protocol. Over the past few months, Tether usage has shifted from a version based on the Omni protocol to a version based on the Ethereum protocol. 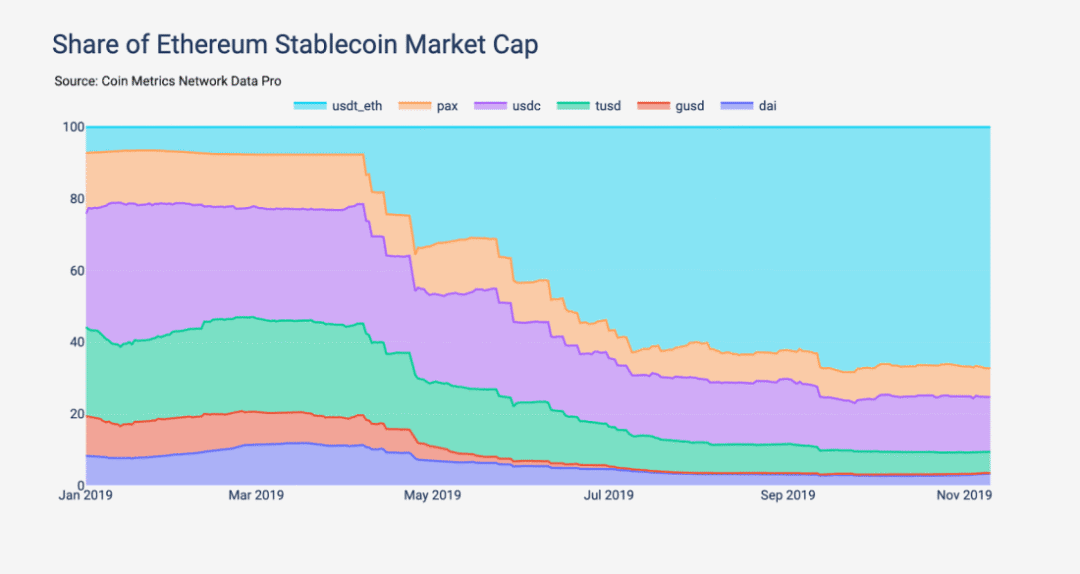 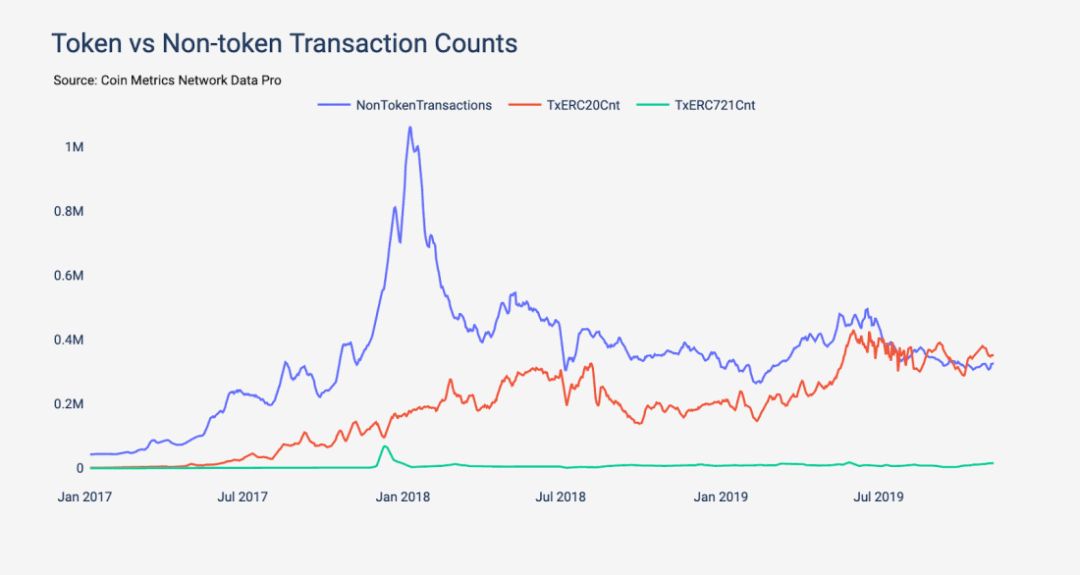 Although ERC-20 tokens have always been the main token type, ERC-721 tokens are on the rise. 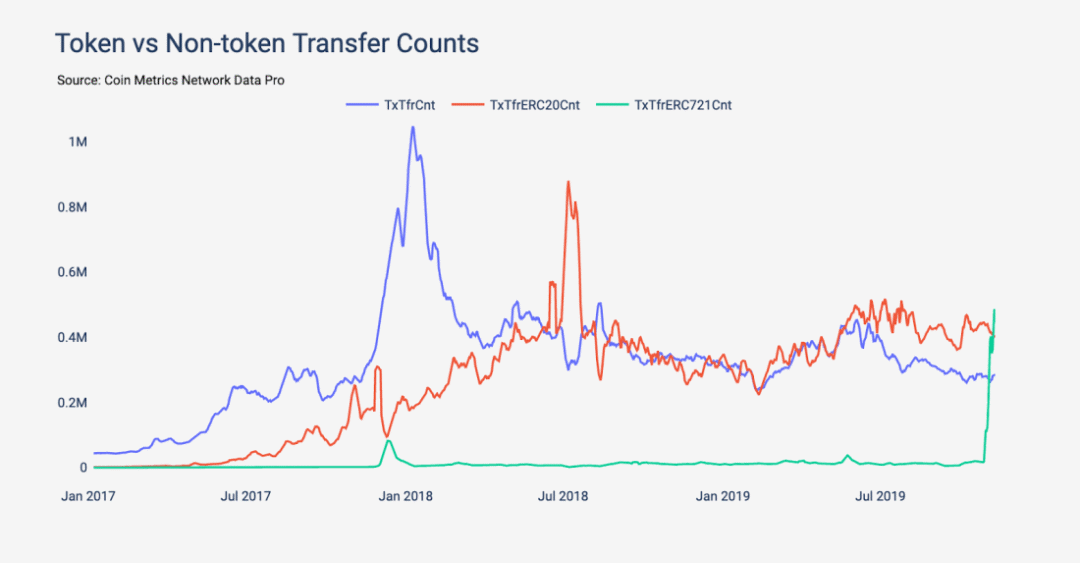 The reason why the number of ERC-721 token transfers rose sharply was mainly due to the card game "Gods Unchained" on Ethereum.

Gods Unchained is a trading card game similar to Hearthstone. Unlike Hearthstone, Gods Unchained is built on the Ethereum blockchain, and each card is an ERC-721 token. In other words, each user can truly own his or her own card and trade freely in the open market like other cryptocurrencies. 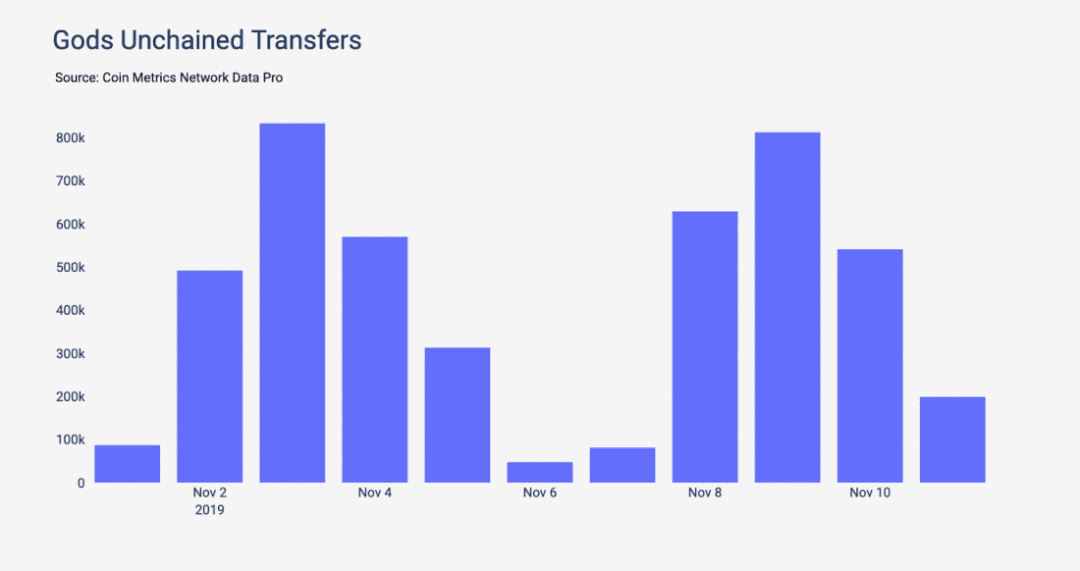 Although still in its infancy, Gods Unchained is one of the practical use cases for cryptocurrencies in the gaming industry. Players on the chain can control their assets in the game. In other words, their assets cannot be taken away or reviewed. There are many on-chain games using non-homogeneous tokens (NFT), and Gods Unchained is just one of them. NFT is also used in applications such as Ethereum Domain Name Service and on-chain games such as Decentraland, and various other types of games will emerge in the future. 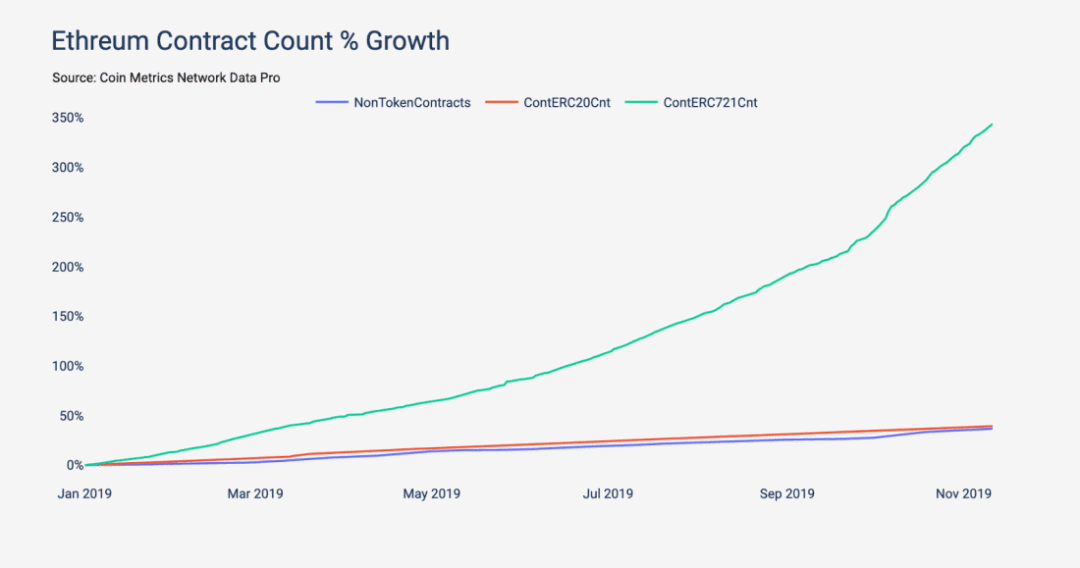 The following is a statistical table of the number of Ethereum contract calls based on the 7-day rolling average. 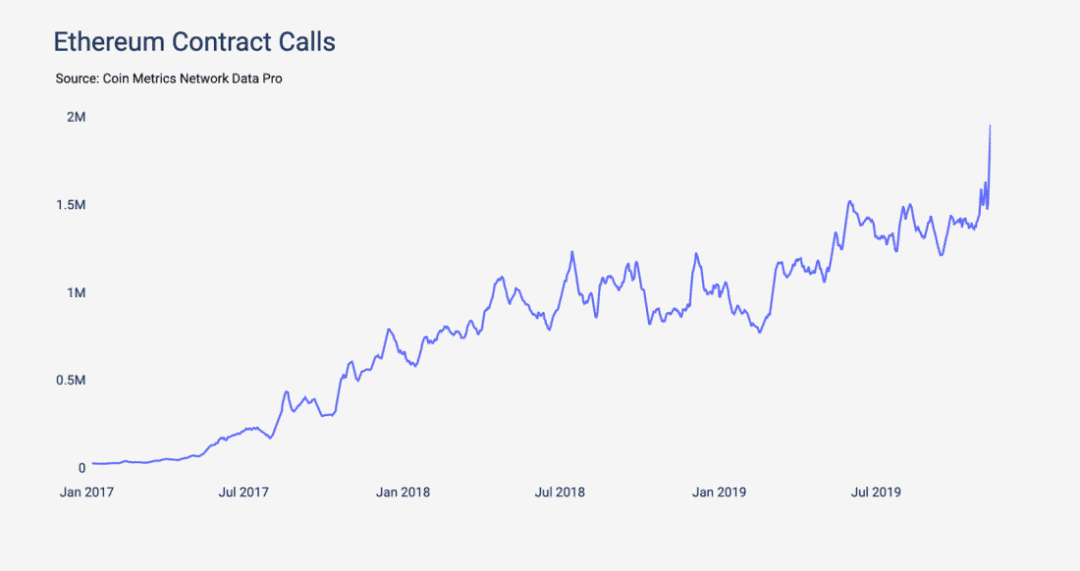 Ethereum tokens have developed tremendously in their short life cycle, and they are bound to change with further development. We will continue to pay close attention to the development of Ethereum's NVTV, stablecoin on Ethereum, and the development potential of ERC-721.

Yang Fan: Both legal and folk digital currencies are virtual currencies, and they are different algorithms and games.