The second article in this series, using supermarket receipts as an example, described the specific process of Arithmetization. This article will be based on another example, while reviewing the Arithmetization process, the content will be extended to the polynomial LDT process.

Alice Claim: "I have 1000,000 numbers and they are all in the range [0,9]". In order to facilitate the verification of the verifier Bob, Alice first needs to perform Arithmetization transformation on Claim. The process is shown in Figure 1 below (in the figure: the black arrow represents the main flow, the red arrow represents additional explanatory information, and the yellow circle corresponds to the index detailed below) 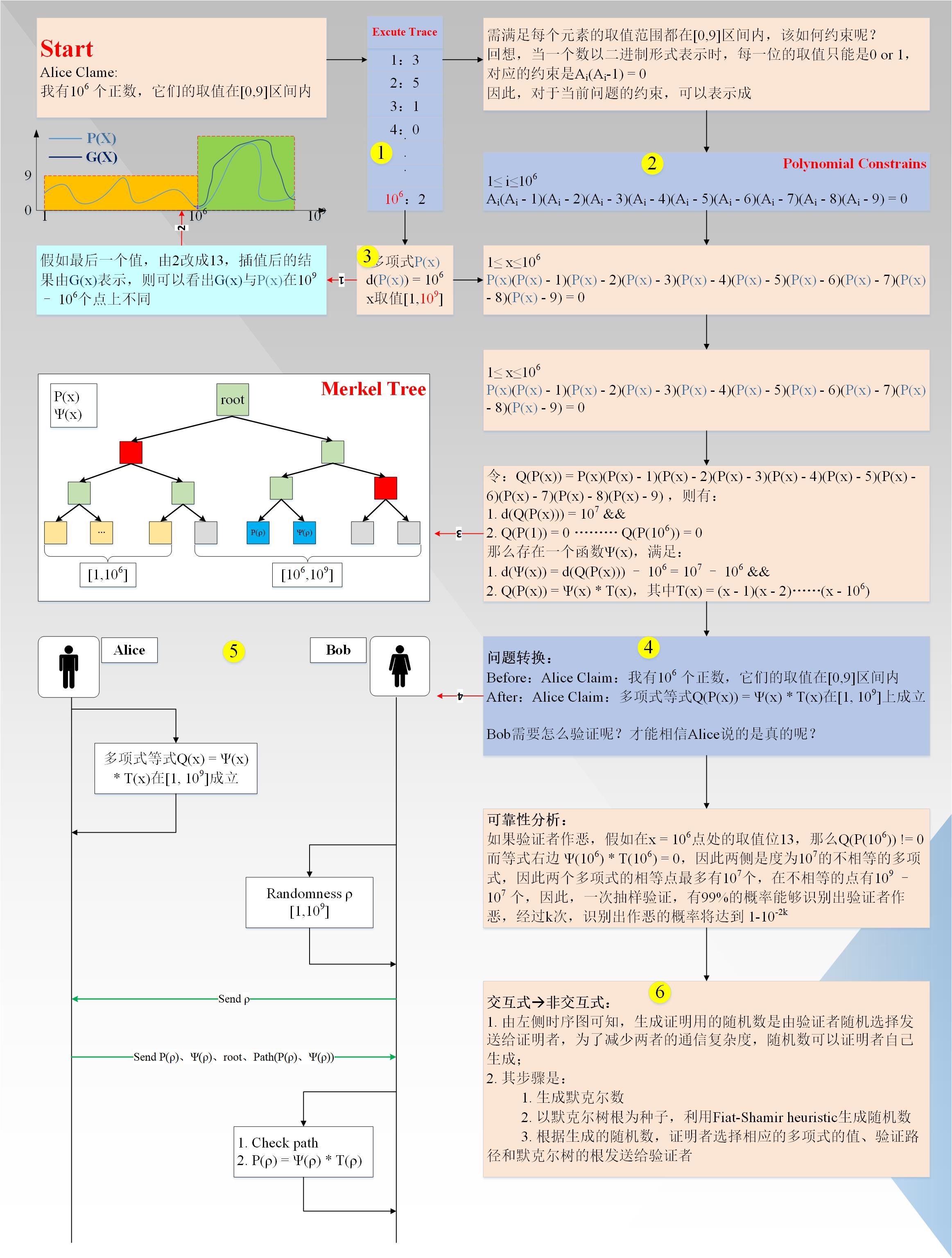 The following details the corresponding process:

We ignore an attack method, that is, for each number x, the prover randomly generates p, and then according to Ψ (x) = Q (p) / T (x), these points are not at any degree less than 1000,000. Polynomial, but can be verified by the verifier. As shown in Figure 2: 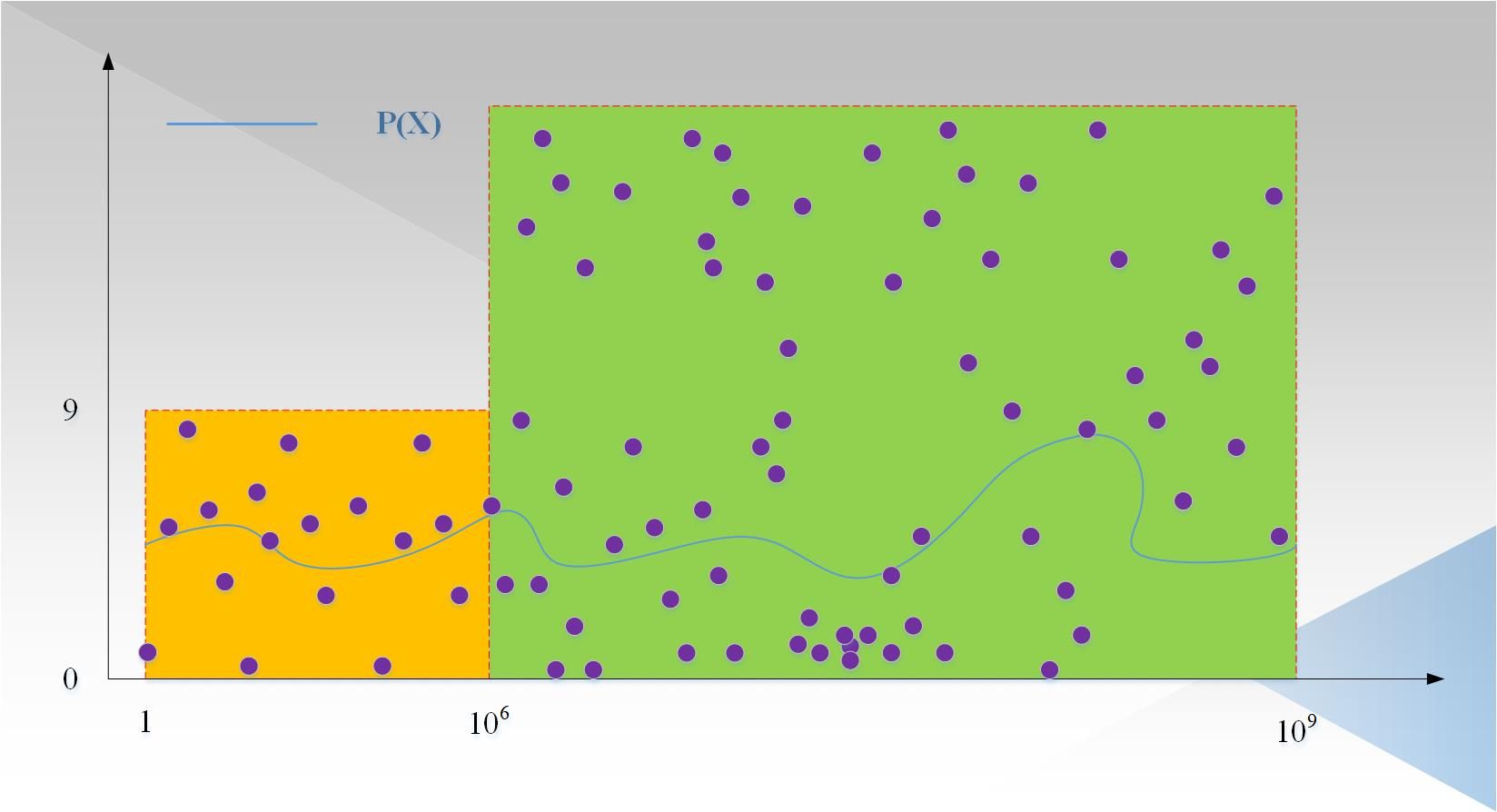 In the picture: The purple points are randomly generated points p. These points have a high probability that they are not on a polynomial with a degree less than 1000,000 (in fact, the first 1000,000 points can be disregarded, because the verifier will only start with 000, 1000,000,000]. Because even if 1000,000 points are selected to interpolate a polynomial with a degree less than 1000,000, other points cannot be guaranteed to be on this polynomial, because other points are randomly generated. Therefore, a way is needed to ensure that the degree of the prover P (x) is less than 1000,000, and the degree of Ψ (x) is less than 10,000,000-1000,000. This is the goal of LDT. What is the specific process of LDT? please watch the following part.

For example, if Alice wants to prove that the degree of the polynomial f (x) is less than 3, it may be 2 or 1 degree. The general process is as follows:

Returning to the general situation, the process can be represented by the following figure 3: 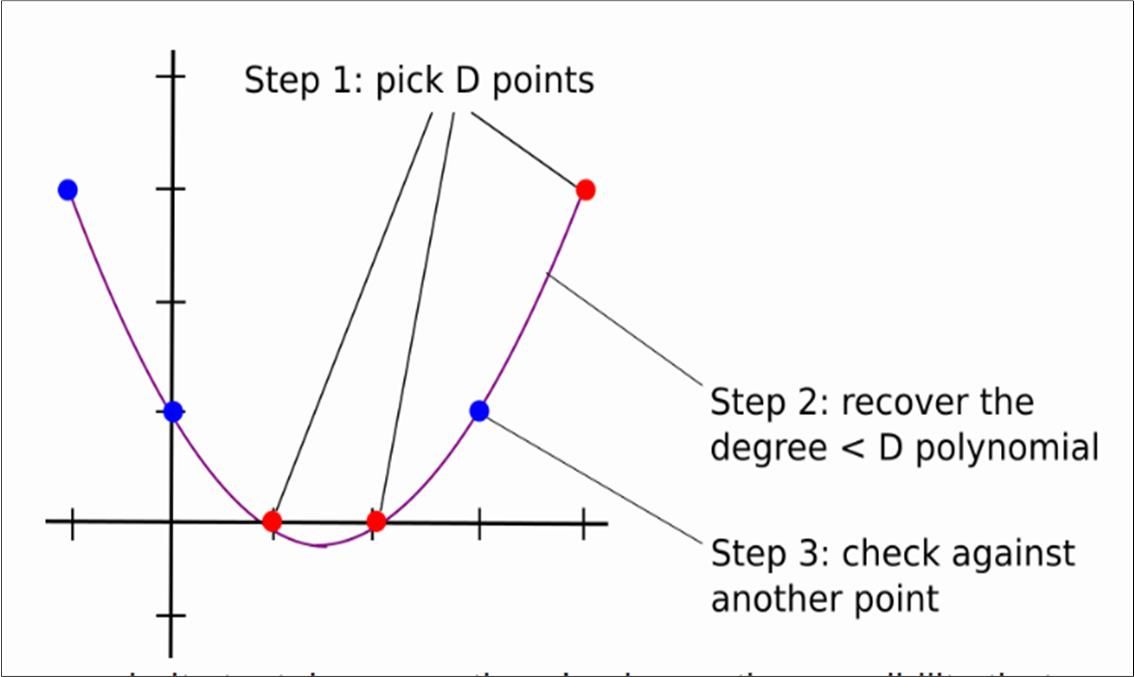 It can be seen that if D is large, the number of interactions between Alice and Bob is D + k, and the complexity is high; is there a way to make the number of interactions between the two less than D, making the verifier I believe that the degree of the polynomial is less than D, and it is definitely impossible to directly return less than D points, because it cannot uniquely determine a polynomial with a degree less than D, so the prover needs to send some auxiliary information. Below we take P (x) as an example to elaborate this process (in fact, it should be proved that the linear combination of P (x) and Ψ (x) is less than 10,000,000-1000,000. This article focuses on LDT, so only P (x x) as an example, this does not affect the understanding of LDT). 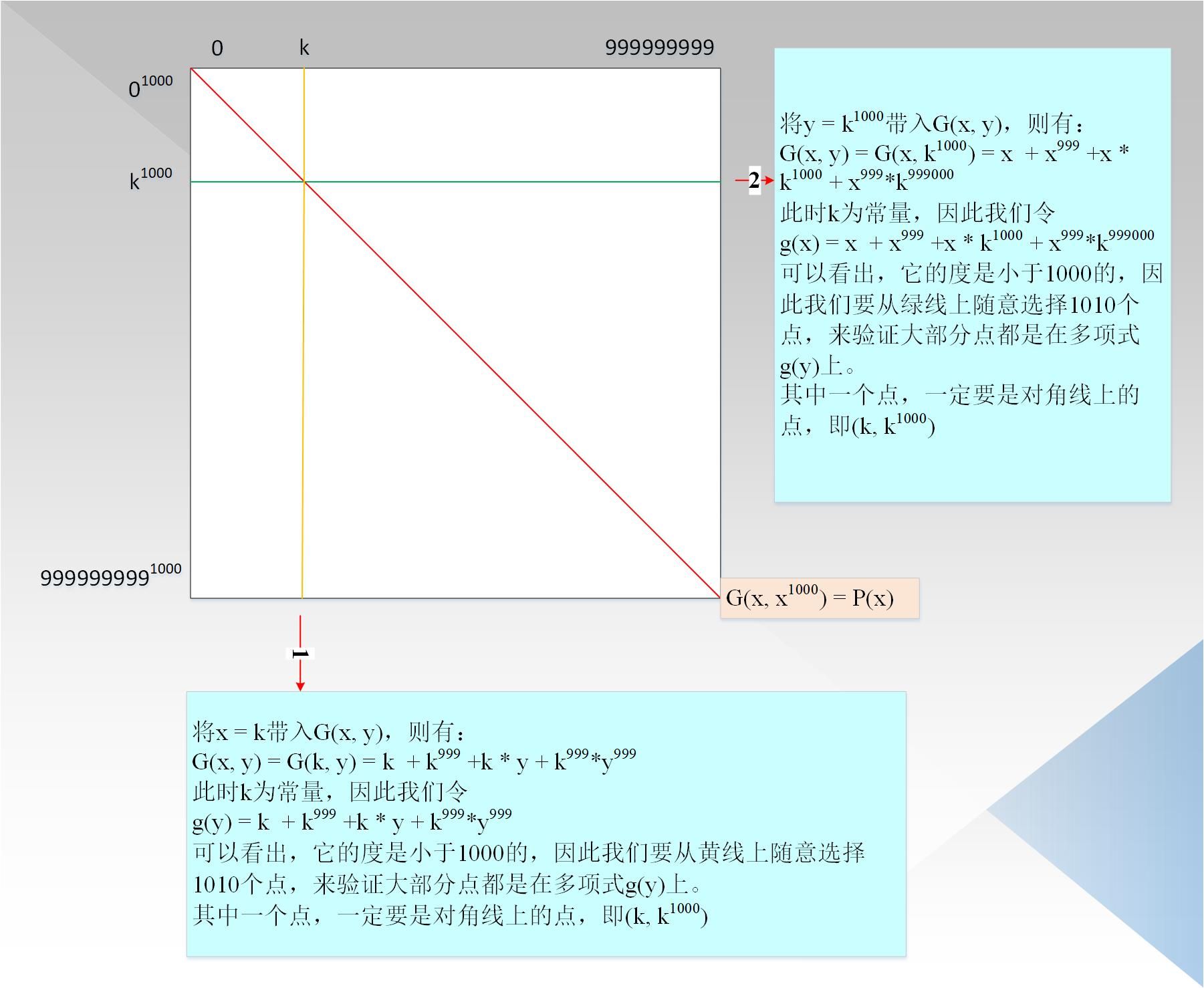 Therefore, if the verifier chooses exactly the intersection of two polynomials, the verification will pass. In fact, the two polynomials have at most about 1,000,000 intersections. However, since the randomly selected points are not selected by the prover, they are determined by The root of the Merkel tree is randomly generated by the seed, so the prover has no chance to do evil, and can choose those points that can pass the verification. 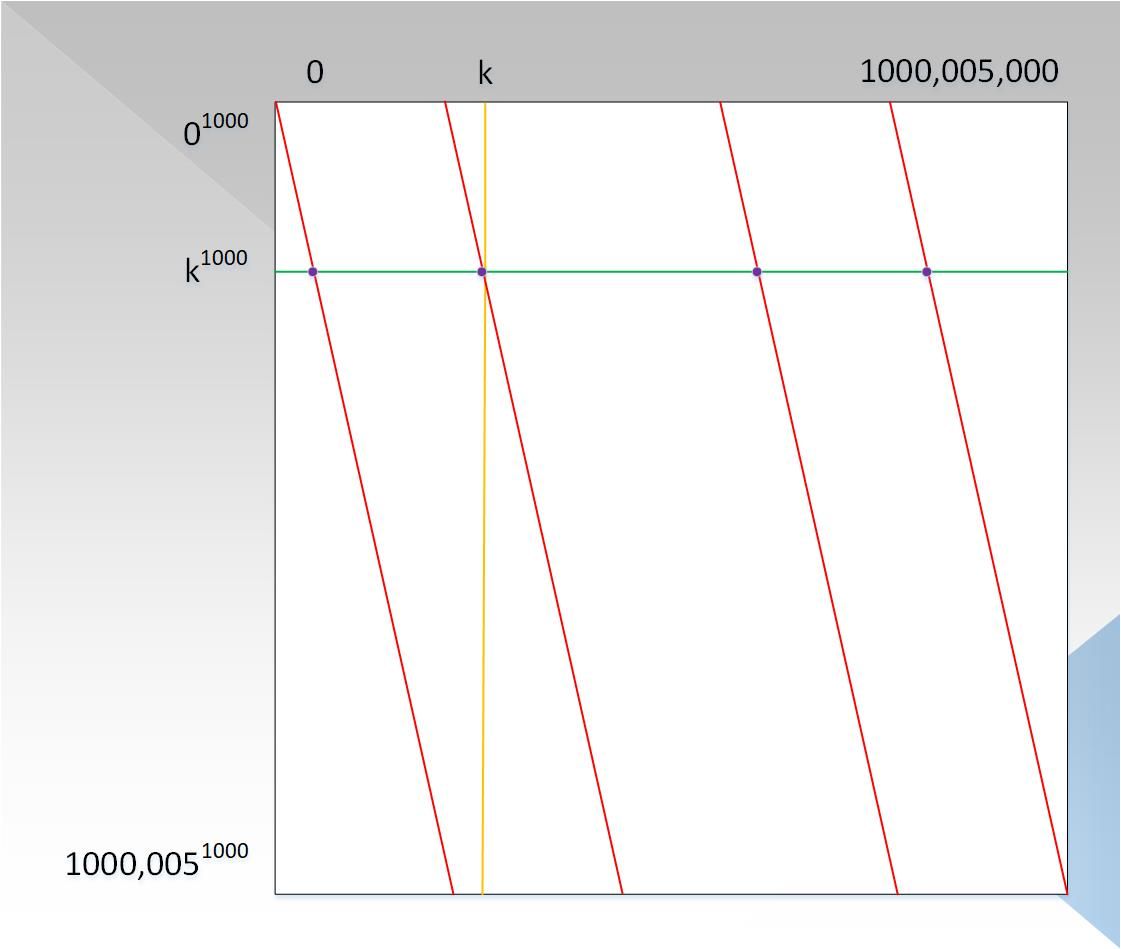 It can be seen that the column coordinates have become 10 ^ 6 elements, and the diagonal lines have become parallel lines, with a total of 1,000. Remember the special phenomenon of Fermat's Little Theorem above? This is the reason for the distribution of diagonals. The reader tries to understand (maybe the reader will think that the diagonals should be zigzag, not this parallel form. Maybe you are right, but this does not affect the verification process. ). At this time, the complexity of the prover has been reduced from 10 ^ 18 to 10 ^ 15, and the proof and verification process is still the same as described in step 3.

We can see from the figure:

As for the detailed process of LDT, it will be left to the last article in this series, so stay tuned.

Thank you all, welcome criticism and correction, if you have any questions or questions, you can leave a message.