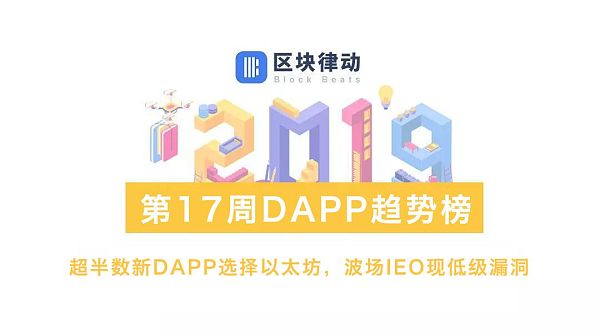 | Welcome to add the author WeChat qkldlinda to communicate with him! Reproduction without authorization is prohibited!

However, in terms of the trueness of the trading volume, the situation in Ethereum has always been better than the wave field and EOS. This is because ETH needs to charge a fee for each transaction, so the DAPP data on ETH is less likely to be false and more likely to reflect the user's actual behavior.

The same is true for Ethereum in terms of developer selection. According to Dapp.com , there were a total of 504 new DAPPs in the first quarter of 2019, of which more than half were based on Ethereum . This shows that Ethereum is still the first choice for developers to build DAPP.

In this week's wave field data, TRXMarket performed better because the project TRONAce (ACE) was launched on the 18th wave of the decentralized exchange TRXMarket's IEO platform LaunchBase. The ACE rose 8 times on the opening night. Due to the need to snap up with TRX, the volume of TRX has increased.

However, it was later reported that some investors used the loopholes to modify the local time to complete the IEO in advance. According to the video of the breaking news, some investors will adjust the local computer time by one hour before the purchase , and then refresh the webpage to synchronize the modified time, and then order the order one hour in advance . TRXMarket has not yet responded to this.

The scammer disguised as a project to let Newdex counterfeit, and the exchange admitted that the review was not strict.

On April 18th, block rhythm BlockBeats quoted Beincrypto as saying that a Russian scammer managed to get a fake token on the well-known EOS decentralized exchange Newdex and successfully defrauded a small number of users who bought the fake token.

It is reported that the fake token display content was released by EOS's gaming application Poker Chained game development team, and then carried out a typical pull-up shipment fraud. But the PokerChained team has not sent their own tokens, and there is currently no currency plan. Shockingly, the Newdex exchange recently launched a non-existent PokerChained token PKD.

The PokerChained team contacted the Newdex exchange and successfully blocked the PKD transaction and removed the fake token. However, several users have bought the token and become a victim of fraud. Newdex admitted that they had put the fake tokens on the shelves without in-depth research and agreed to compensate the users for the losses.

The top 3 EOS charts in this issue are Lore Free, Hashbaby, and PRA Candybox. EOS last week was 114,572 active users.

The top 3 of this ETH list are called My Crypto Heroes, CDP Portal and IDEX. ETH last week was 10,316 active users.

Brazilian encryption company GBB is accused of fraud, and its CEO 25,000 BTC is forfeited