"Isn't this the IEO of the currency circle?"

On November 26th, Eastern time, the New York Stock Exchange (hereinafter referred to as the "NYSE") submitted an application document to the United States Securities and Exchange Commission (SEC), and proposed to modify the relevant regulations on direct listing.

Direct public offering (DPO for short) means that an enterprise can go public on the exchange without a roadshow without going through investment banks and other underwriters. Earlier in February 2018, the U.S. SEC approved a proposal submitted by the NYSE in March 2017 to modify the listing process.

In 2018 and 2019, Spotify, the world's largest streaming music service, and Slack, an office application development company, respectively listed on the NYSE in this way. In 2019, China Index Holdings, which was spun off from SouFun, was also listed on Dasdaq by direct listing.

However, DPO can save listing costs, but cannot issue new shares, and can only buy and sell old shares, which means that companies cannot raise new funds.

The application of the NYSE is to change relevant regulations to allow direct listed companies to issue new shares to raise funds at the same time, so that the cost of raising funds is lower than that of an initial public offering (IPO). At the same time, the NYSE also recommends that the market value of new shares issued in this way should not be less than 250 million US dollars in order to provide the market with appropriate trading liquidity. . This is mainly to motivate companies to go public at low cost.

As soon as this news came out, the rules for direct listing triggered discussions in the currency circle. Odaily Planet Daily noticed that some people in the currency circle forwarded and ridiculed in the WeChat circle of friends. The DPO mentioned in the document and the IEO (Initial Exchange Offering) model of the currency circle are exactly the same, and there are no third parties. Get involved and go directly to the exchange for trading.

The DPO bypasses the underwriters required for the IPO, allowing corporate employees, insiders, and investors to sell their existing shares directly to the market without selling new shares, there is no problem of dilution of new shares, and no insiders have Restrictions on selling shares such as lock-up periods allow institutional and individual investors to purchase equities on an equal basis. In traditional IPOs, the NYSE and Nasdaq require original shareholders to lock in for six months.

Like IEO, the purpose of DPO is not to raise money. For companies that want to list through DPO, what they want more is the high liquidity of the stock.

Generally, companies have two main purposes for listing. One is to raise funds for development, and the other is to obtain liquidity. The latter includes other objectives such as the withdrawal of early investors.

DPO is an old stock trading, so there is no financing. Its biggest purpose is to float the company. The most important thing for a DPO is liquidity, and the transaction volume is "water". Once no one buys or sells, no one recognizes it, and the company is an empty shell. Finally, the fundamental significance of DPO is lost.

In contrast, the fundamental of IEO is to solve the problem of token circulation. The difference is that the IEO pioneered by Binance is more like a new stock market in the traditional financial market. Before the official launch of the exchange, the project party must take out a portion of the early investor's quota at a low price and give it to participants, attracting more retail investment at a time Those who come to the exchange to trade, improve the liquidity of the Token.

If the application of the NYSE is approved, the issue of new shares also bypasses the underwriter, it is really that the NYSE also played IEO.

"Liquidity is king, as long as they can come to trade, they are all good kids." Some people in the industry once commented on DPO. Under the IPO winter, the NYSE is also doing all it can to attract corporate IPOs.

According to 36 氪, after 2000, the IPO of American technology companies was sluggish, and they preferred to choose private equity financing rather than go public. Equity capital markets (ECM) revenue in the United States in 2017 was $ 7.3 billion, accounting for only 43% of 2000. Data show that the number of IPOs in the United States in the third quarter of 2019 decreased by more than one-third compared with the second quarter.

Erin Griffith of Fortune Magazine once commented on DPO.

Industry insiders dubbed this direct listing model without underwriters: "No middleman makes a difference." In the past, companies often needed to invite investment banks as underwriters to conduct IPOs, and they also needed to spend a lot of money to help them prepare for listing.

For enterprises, cutting off underwriters means that the cost of listing is greatly reduced, which is the biggest advantage of DPO. But KEx, director of investment analysis at OKEx, believes that "the middlemen not only make a difference, but also play a funnel."

In addition to providing process services, IPO underwriters also help companies endorse, publicize, and communicate with investors. This is equivalent to helping companies sell their shares. It also provides a certain degree of liquidity for companies that have no visibility in the US capital market. Sex and price underpinnings.

Lord K does not think that DPO is progress, it is likely to be a retrogression. DPO removes the underwriter, and it is likely that liquidity risk and valuation risk will occur. "This is a reduction in costs in exchange for risk exposure."

Once a company's listing is expected to be too high, it is very likely that after listing, there will be no investor acceptance and the stock price will fluctuate violently. This is the biggest controversy facing the DPO so far.

Due to the lack of new shares and the lack of liquid stocks, the stockists who have just been listed are higher than the market's reasonable price, and the lack of professional underwriters roadshows and inquiries. The fluctuations may also be greater.

The current IEO has been developed by some exchanges into a "ten times opening" fast-running game. The currency price has skyrocketed and plunged too quickly. Many retail investors have no time to run, and have become high-end "receivers." quilt. This is still the case for IEOs that require some private equity investors to lock their positions. Is there even a DPO with no lock-up period? Will it be even worse?

DPOs speak for themselves

DPO and IEO seem similar, but the internal logic is not the same.

The less well-known Bitcoin blockchain project is willing to endorse itself with IEO; DPO may be a well-known unicorn.

Considering a company that is listed directly, it generally needs the company's reputation to be large enough and sufficient cash to pay the investment bank underwriting without roadshow advertisements. If it is not known at all, there is no roadshow without an underwriter to help the company's tray. Fall to the heart.

Currently, there are only two companies listed on the U.S. stock market as DPOs. One is Spotify Technology SA, an online music company, and the other is Slack Technologies Inc, a recently listed company that works with SaaS.

Although the profit is negative, the loss is small, and there is no shortage of capital market support.

In addition, Slack's reputation in the market is also large enough. Since 2009, Slack has experienced 10 rounds of financing and a total of 1.2 billion US dollars. In the early days, it has received support from world-renowned giants such as Andreessen Horowitz and Accel Partners. Andreessen Horowitz It is one of the world's largest technology-based venture capital companies, at the same level as Japan's SoftBank (SoftBank) and San Francisco's Sequoia Capital, both of which have a market capitalization of more than $ 1 trillion. Top venture capital Accel Partners was an early investor in Facebook and Dropbox.

All these factors have laid the foundation for Slack to go public via DPO. Spotify, the world's largest streaming music service, is also a household name in the United States. At present, the stock prices of both companies have not exceeded the listing date. 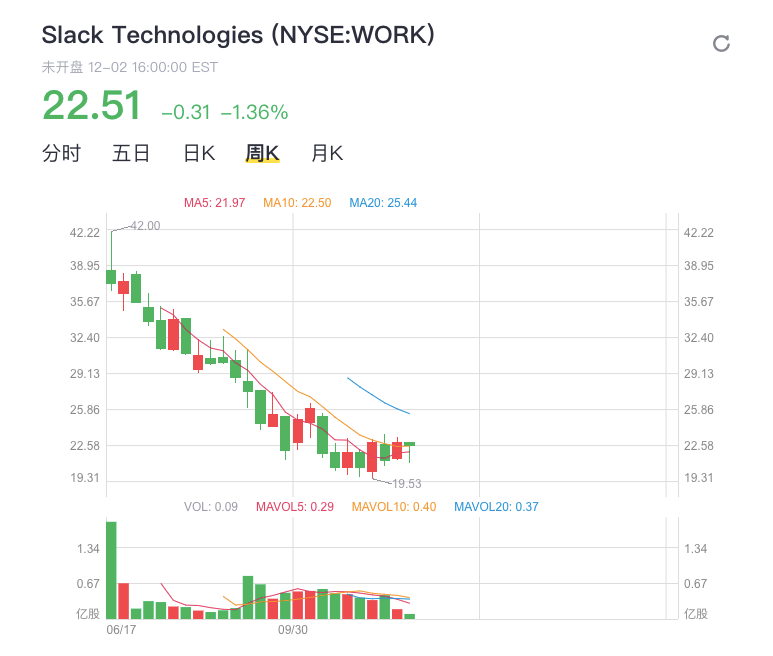 IEO relies on the trading platform to endorse assets. Generally, the blockchain projects that choose to conduct IEO are some very early projects. The Tianwang level project does not need to carry out IEO.

As for those projects that are still relatively early in development, their tokens have no value and no liquidity. They can only rely on the reputation of the exchange to endorse themselves to attract investors to trade. However, the liquidity of the token obtained in this way is only short-term. If the project party does not act on its own, it will not do technical development and scenario landing to increase the value of the token. In the end, it still cannot escape the fate of becoming an "air coin".

Although the DPO and IEO are similar, there is no lack of ridicule, but in summary, we can feel that the same thing is that in the environment of a bursting capital bubble, difficulty in raising funds, difficulties before listing, and frequent breaks after listing, everyone is in Explore the way forward.

Why did Slack go public? Did you make it?

What is the difference between a direct listing and an IPO?

Director of the Technology Department of the Central Bank: Blockchain and other technologies provide development opportunities for improving the quality and efficiency of financial products and services

Sheknows | Hu Jie: At present, DC / EP has taken the first step of trying, and its role is limited