According to the incomplete statistics of the Interchain Pulse Institute, in November 2019, a total of 86 blockchain application projects were disclosed worldwide, of which 57 were disclosed by China, an increase of about 110% from the previous quarter. In comparison, overseas markets are extremely deserted. In November, the number of blockchain application project disclosures after China was the United States and Japan, with nine and four respectively; Australia, Singapore and Thailand followed closely, with three countries each having two disclosure projects. 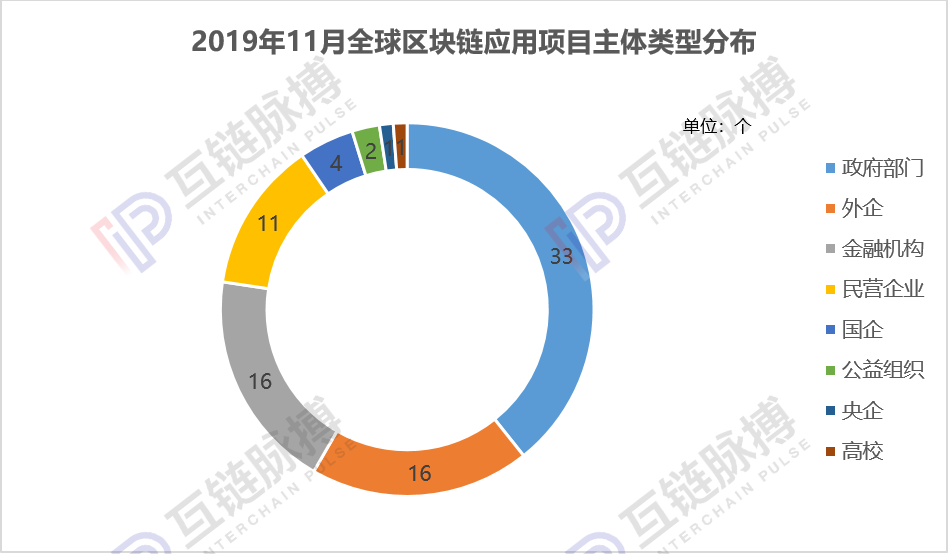 According to statistics from the Interlink Pulse Research Institute, in November 2019, the number of application projects disclosed in the two major areas of finance and government affairs was 25 and 23, accounting for 29.1% and 26.7%, respectively.

For example, in terms of cross-border financial services, the China Trade Finance Cross-Banking Blockchain Platform, led by the China Banking Association, with 11 head banks and 4 technology companies, has realized the implementation of domestic letters of credit and forfaiting on the chain; The cross-border financial blockchain service platform promoted by the Shanxi Branch of the State Administration of Foreign Exchange officially entered the pilot; the Everbright Bank's cross-chain blockchain Forfaiting Trading Platform (BCFT), which was established by Bank of China, Bank of China, China CITIC Bank, and Minsheng Bank, was officially launched.

In the field of government affairs, the blockchain application projects in November were mainly focused on taxation, electronic certificates and justice. For example, in terms of taxation, the Shenzhen Traffic Police Bureau issued the first blockchain financial electronic bill; the Tax Service Office of the Nanshan District Tax Bureau of Shenzhen launched a vending machine capable of issuing blockchain electronic invoices; in addition, Thailand's consumption tax The department is about to establish a blockchain-based tax refund system for oil exporters.

In terms of judicial application, Beijing Chaoyang Court launched an online platform for the management of contradictions and disputes based on blockchain technology; the information platform for sentence reduction and parole independently developed by the Tianjin People's Procuratorate was officially launched in November.

In automotive manufacturing and sales, U.S. blockchain company HashCash Consultants develops a blockchain-based supply chain network to track the origin of minerals such as cobalt, tungsten, and lithium used in automotive and battery production; Lamborghini will Trial blockchain technology in its supply chain operations.

Finally, in the field of public welfare, Guangzhou's first Internet + Smart Library public welfare program was launched, which used blockchain technology to connect donors and interact with the recipient's information to make the donated book public welfare more transparent, warmer and more credible; and Nanjing Jian'ou District The Taoyuanju community has piloted the storage of public welfare time in Alipay, redemption of pension services, and the entire process was recorded on the blockchain. In the United States, the AGC Foundation officially launched a blockchain environmental protection public welfare platform to encourage all people to participate in waste classification.

According to the analysis of the Interlink Pulse Research Institute, the policy of the "1024 Conference" has been overweight, and it has "ripe" a large number of blockchain application projects in a very short period of time. However, this kind of policy "ripe" is essentially a double-edged sword. On the one hand, it does promote the development of the blockchain industry and the application of blockchain technology to a certain extent. On the other hand, in the current district, Blockchain landing applications are still at the stage of "throwing stones and asking for directions". A large number of blockchain application projects are rushing on. If the application landing results are far from expected, after the boom, the entire blockchain industry may return to a trough.

Grayscale Investment CEO: Digital assets such as Bitcoin will continue to exist and challenge the specifications of existing commodities

Analysis: The futures market has a long-term spillover of 11.05%, and the over-the-counter operation has increased in the evening.

Former Italian Minister of Economy Giulio Tremonti: Cryptocurrency is the future in Rome