On November 28, the founder of doublespend.cash, a website that tracks and collects Bitcoin Cash (BCH) network double payment attempts, stated that only 1 out of 1,105 double payments were broadcast within one second after the first transaction. The site's creator emphasized that in most cases, "only if you submit at the same time, double payment can succeed."

Bitcoin Cash (BCH) proponents have been interested in concepts such as zero-confirmation transactions and double payment proofs, as these concepts can greatly enhance instant transactions. In essence, double payment refers to someone trying to spend the same BCH to two different addresses. Although this is not common, double payment may still occur on digital currencies such as BTC, BCH, and BSV. The website doublespend.cash keeps track of successful and successful double payments on the Bitcoin Cash (BCH) blockchain. On Reddit, a user named Dagurval (the founder of the Bitcoin XT software development and data website) explained to people on Thursday: If double payment is to be successful, it must be sent simultaneously.
Founder Dagurval told Bitcoin Cash (BCH) proponents on Reddit: "Of the 1104 double-payment attempts, only 1 succeeded after broadcasting for more than 1 second … the chart between the first and the second 'Time' shows the time difference between seeing two transactions. "He also added:
It shows that in most cases double payments can only be successful if they are submitted at the same time. It also shows that miners respect the "First Seen" mechanism. After Dagurval released the data, the Bitcoin Cash (BCH) community discussed the risks of double payments and certain situations between double payments and merchants. One user said: " It's good to know (the news), so this means zero confirmation is quite secure, and double proof of payment will make it more secure. " Others are less confident, saying, "Unless you Be able to gauge how much of this is deliberate fraud, or you won't be able to imply that number's security in some way. " Reddit user Jessquit wrote in response to the security breach: " [Data] means that merchants are willing to wait three seconds to see if there are duplicate transactions, and about 99.9% are safe when accepting unverified low value transactions. " The discussion was a hot debate on subreddit r / btc as this conversation is likely to be censored on the subreddit forum r / bitcoin. Dagurval's doublespend.cash statistics also led people to discuss the concept of double payment proof, a concept that some BCH developers have been trying in recent years. 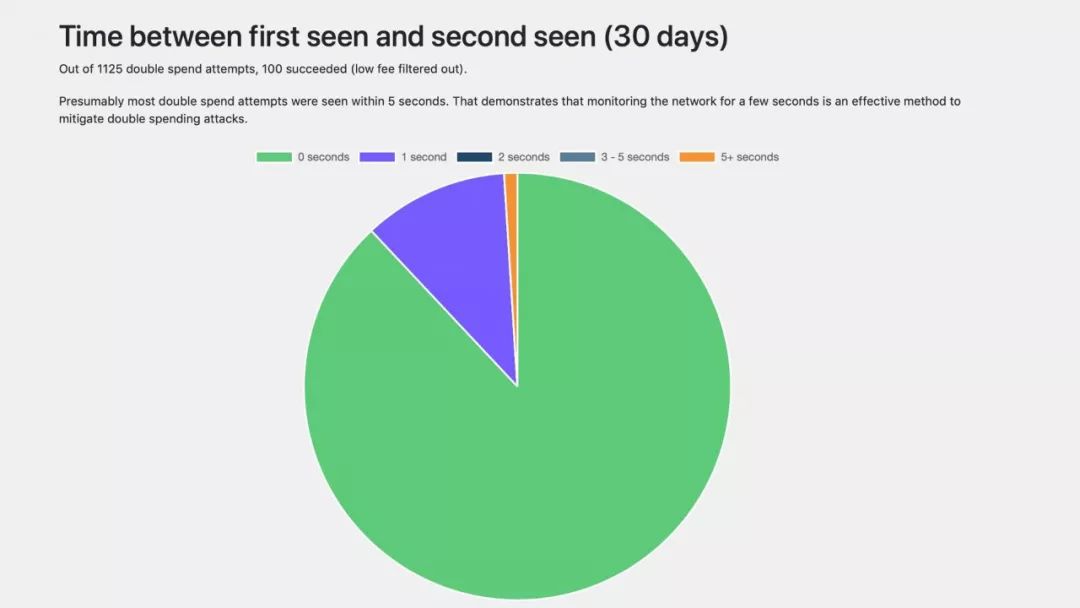 In July of this year, news.Bitcoin.com reported on Hubee's main developer Tom Zander's implementation of the dual payment proof of concept on Flowee. The protocol document was written by software developer Imaginary Username, and programmer Mark Lundeberg also helped; BCHD and Openbazaar developer Chris Pacia wrote documentation for a system called Double Spend Alert.
In 2015, Mike Hearn, a former Bitcoin developer, published a paper on the topic entitled "Double Payments in Bitcoin and How to Make It Harder". Hern's research points Gavin Andresen and Bitcoin XT developer Tom Harding work on dual payments. Harding has done a lot of research on this subject, and he discussed the dual payment relay detection system in his lecture "Prevention of Dual Payments" at the 2018 Satoshi Vision Conference in Tokyo.
Since the birth of Bitcoin, developers have been working hard to stop it, including the possibility of a successful double payment out of 1,105 attempts. Even Satoshi Nakamoto discussed the topic of accepting zero confirmations in July 2010. In a post called "Bitcoin Snack Machine" on the famous bitcointalk.org website, " I believe that for a payment processing company, in 10 seconds or less Inside, through good inspections, you can provide fast transaction distribution services. "

In the conversation with the vending machine, Satoshi Nakamoto also talked about compliance with the "First Seen" mechanism and competition between transactions a fraction of a second faster than the other party. Satoshi Nakamoto stated at the time:
Network nodes only accept the first version of the transaction they received to merge it into the block they will generate … When you broadcast a transaction, if others broadcast a double spend at the same time, it is a race to spread to the most nodes . If it is slightly ahead, it propagates through the network faster in a geometric manner and gains most nodes.
"Today's Topic"

What do you think about the concept of double payment proof?

Disclaimer: This article is translated from news.bitcoin.com's official website. If you need to reprint the content, please contact the official WeChat: BitcoinComChina, and mark the original link at the end of the article. Thank you for your support.