And the announcement of policy information is in a state of national linkage. In terms of supervision, the North, Shanghai, and Shenzhen have successively carried out investigations and crackdowns on virtual currency trading venues and virtual currency transactions. In terms of support, statistics on the pulses of inter-chains, a total of 16 provinces and cities have launched 27 policies on blockchain support this month. That is, on November 21st of this week, following Beijing and Shanghai, the Office of the Leading Group for the Special Rectification of Internet Financial Risks in Shenzhen City (Shenzhen Financial Bureau) released the "Reminders on Preventing the Risks of" Virtual Currency "Illegal Activities".

It is worth noting that the "Reminder" document pointed out that this action is related to the deployment of the National Mutual Funds Remediation Office, which is consistent with the notice issued by the Shanghai Mutual Remediation Office to Shanghai on November 15. Explain that this is a national operation.

Prior to this, the more important regulatory policy information for this month was that on November 6, the Hong Kong Securities Regulatory Commission issued the "Warnings on Virtual Asset Futures Contracts" and "Position: Regulating Virtual Asset Trading Platforms". Although regulated, most investors interpret the policy as "good." This move may open the way for the safe entry of hundreds of billions of institutional funds into the cryptocurrency market. 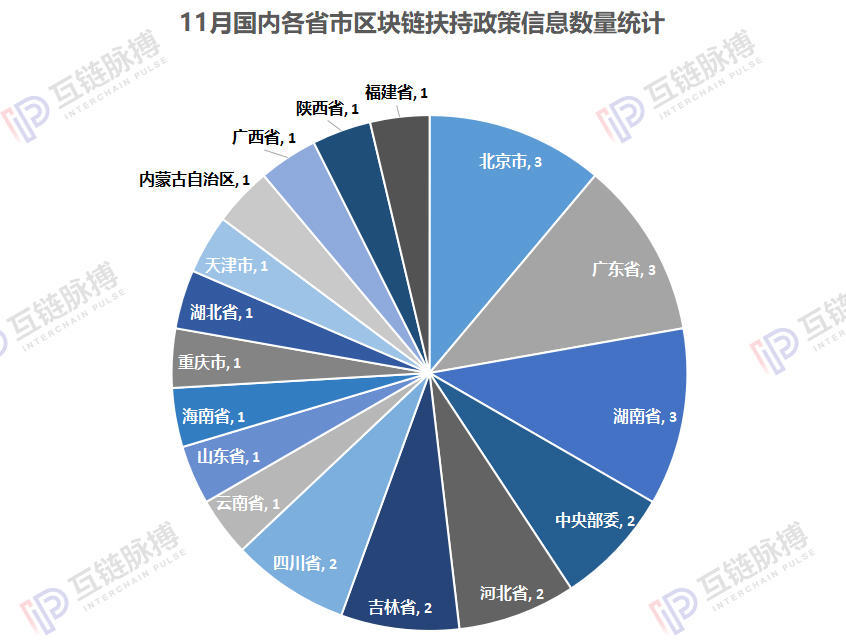 Among all the supporting policy information, Hebei Province, Jilin Province, Yunnan Province, Shandong Province, Guangdong Province and other 9 provinces and cities have proposed on the regional standing committee to support the development of blockchain, combined with the local industry to promote development; Zhuzhou City, Changsha City, Meishan City, Sichuan Province, Xi'an City, Xiamen City and other places have put forward the active layout of the blockchain field in their respective development plans, development opinions, and management measures.

The policy information related to Hainan Province is the "Implementation Plan for Supporting the Construction of a Free Trade Pilot Zone in Hainan and a Free Trade Port with Chinese Characteristics" issued by the Ministry of Industry and Information Technology on November 9th. Among them, 17 are proposed to support the development of the blockchain industry in Hainan. project.

In addition, on the evening of November 28, the "Guiding Opinions of the CPC Central Committee and the State Council on Promoting the High-quality Development of Trade" was released. The Opinions clearly stated that it is necessary to promote the organic integration of the Internet, the Internet of Things, big data, artificial intelligence, blockchain and trade, and accelerate the cultivation of new momentum.

Foreign Blockchain Policy: South Korea and Vietnam are heavily regulated, and many other countries plan for blockchain development in 2020

On November 21, the Korean Parliament's Administrative Committee approved a legal amendment to the report on information on specific financial transactions, which included relaxing related conditions for the licensing of cryptocurrency exchanges. The law amendment means that the cryptocurrency industry, which has been in a "grey zone", will be included in the system circle. On the 26th, the amendment was approved by the Korean Parliament's Administrative Committee. However, the final approval of this amendment requires the approval of the Legal Judiciary Committee and the Plenary of Congress.

On the other side of Vietnam, on November 8th, its Ho Chi Minh City plans to formulate a regulatory framework and policies related to blockchain technology to minimize the potential risks of building a smart city. On November 12, the National Bank of Vietnam is working on a new decree to regulate cryptocurrencies. According to the drafting agency, cryptocurrency is not a new currency, but simply a fiat currency in the form of an instrument or payment method used for payment transactions. 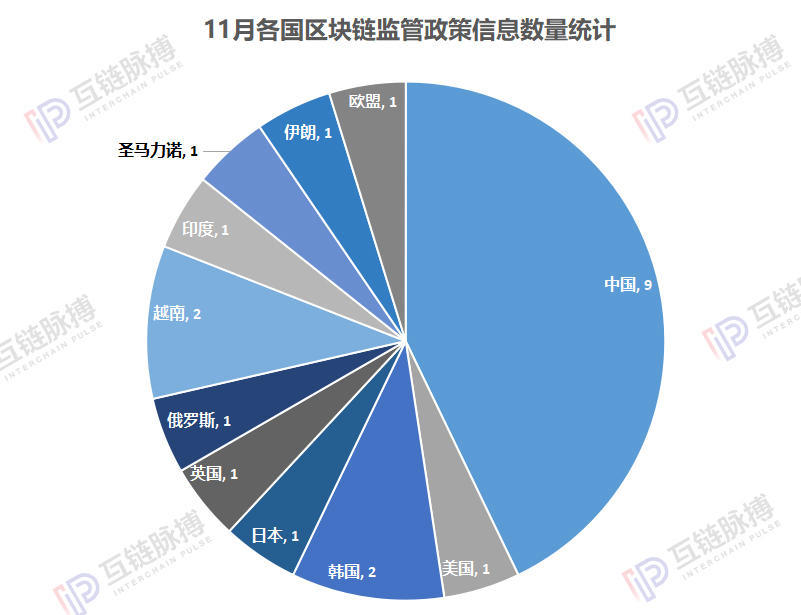 In addition, Japan, the United Kingdom, and Russia each have 1 piece of blockchain-related information, all of which are centered around digital currencies.

On November 5th, the Japan Financial Services Agency planned to formulate restrictions in 2019 to prohibit the composition and sale of trust investments that use virtual currencies as investment objects.

News on November 4th, the UK tax authority issued a tax guide for enterprises. The General Administration of Taxation and Customs states that it generally does not consider cryptocurrencies such as Bitcoin as currency or "stocks or securities", which largely exempts these cryptocurrencies from stamp duty. However, according to the guidelines, tokens used for debt transactions are still subject to stamp duty.

November 7 news, Russia is planning to formulate laws and regulations that allow the government to confiscate Bitcoin. The Russian Ministry of the Interior will work with several state agencies to develop a plan that may become law in 2021.

San Marino and Iran, which also have information on blockchain regulatory policies, are targeted at blockchain entities and illegal miners, respectively.

The Republic of San Marino officially adopted the "Blockchain Entity Registration" in November, inviting companies in the industry to apply for certification. It is reported that the project was initiated by San Marino's wholly state-owned technology innovation company San Marino Innovation Institute.

News on November 14th, as new regulations on the pricing of electricity used by cryptocurrency miners were introduced, Iran offered bounty to anyone who revealed that the country was illegally mining cryptocurrencies. 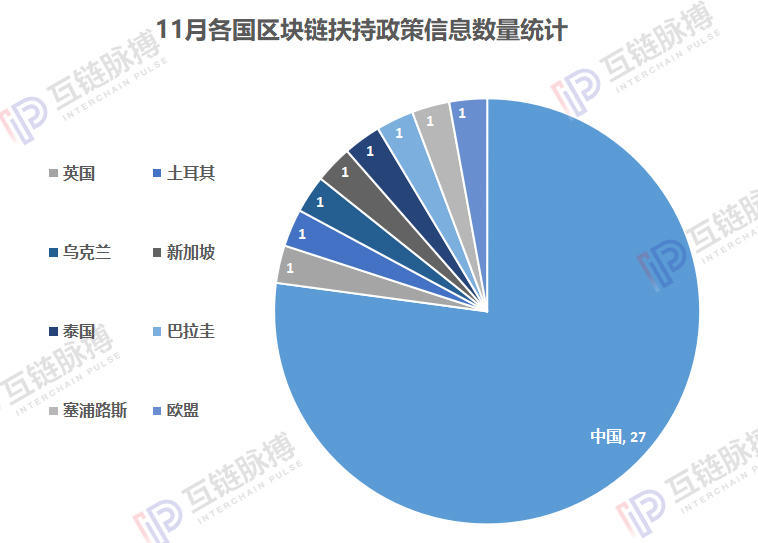 In terms of support, this month a total of 8 foreign policy information related to blockchain support were announced. Compared with 11 last month, the number also fell to a certain extent.

Subsequently, on November 20, the Monetary Authority of Singapore announced a plan to lift the ban, allowing crypto asset derivatives trading on authorized exchanges.

In addition to the above, Turkey, Paraguay, Thailand, the European Union and other regions have related policies in the planning and layout.

On November 5, the Turkish President instructed that the government should complete the test of the digital currency of the national central bank by 2020. According to the 2020 annual presidential plan, the Turkish central bank plans to issue a blockchain-based national digital lira.

On November 25, the Thai Securities and Exchange Commission plans to revise its digital asset business regulations next year to promote the development of crypto assets while protecting investors from unnecessary risks.

On November 29, the EU plans to implement a new proposal on the fourth anti-money laundering directive, which will allow banks to buy, hold and sell bitcoin. Aiming to relax strict rules that prohibit banks from providing virtual assets or providing custody services, the proposal is expected to take effect in 2020.

Economic Daily: Technology such as blockchain fundamentally changes the path of factor flow and spatial allocation