Bitcoin active user growth tends to stagnate, what does this mean?

The Bitcoin network has been expanding almost since its inception, but this trend may be about to reverse.

Based on the statistics of the daily active addresses of Coin Metrics, we observed the daily active Bitcoin address count from January 10, 2009 to December 1, 2019. Not surprisingly, the overall trend is upward. For example, the active address trend line from 2012 to 2018 is very clear-it continues to tilt upwards. 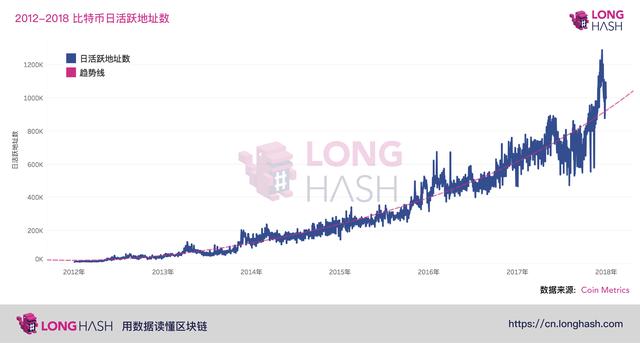 However, in the nearly two years since then, the growth of active Bitcoin users has slowed significantly. The chart below shows daily active user data for 2018 and 2019: 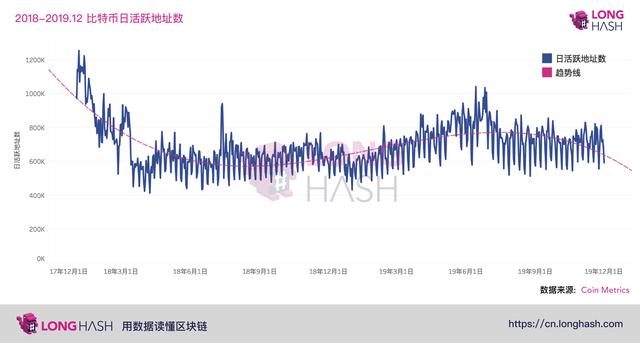 The upward trend has almost completely disappeared.Although the decrease in active users can be partly attributed to the bitcoin plunge in early 2018, it is worth noting that the number of daily active users has also been It really hasn't changed much.

Coin Metrics data also shows that the number of active Bitcoin addresses follows a trajectory similar to the price trend. Analysis of these two data (daily active address and daily closing price in US dollars) shows that the Pearson correlation coefficient is 0.76, which indicates that there is a strong positive correlation between the two. It's unclear what causality exists, but it does suggest that if the price of Bitcoin rises again sharply in the future, the number of active addresses may also rise. But what does all this mean for investors? It depends on what people think of the purpose of Bitcoin.

If bitcoin should become a payment method according to the earliest published Bitcoin white paper, then the stagnation of its active user network growth is indeed worrying. However, as many supporters now claim, if Bitcoin becomes a value store like gold, the number of active users may be much less important. After all, many users who highly value Bitcoin may not actively participate in transactions, and if Bitcoin is a value store like gold, this situation will not weaken its value.

Even so, the correlation between active users and prices is clear. Whether you want bitcoin to act as a payment method or a store of value, you may want the price to rise. The correlation is not causal, but the data shows that if the number of active users increases, the price of Bitcoin is likely to rise, so it is not bad to attract more people to the bitcoin ride.

Zhao Dong: Most people are not desperate, how can cattle come?

John McAfee allegedly released after being detained in the Dominican Republic

Cosine: Some C2 technologies for mining worms borrowed the Ethereum transaction record as a dynamic acquisition of C2 addresses.

Huaao Trust will use the financial technology platform of Lujin to increase the exploration and application of cutting-edge technologies such as blockchain.