After the bubble, DeFi, which survived the Ethereum ecology in the big waves, seems to be the only landing project that can justify itself.

ERC20 Token contributed to a large number of crazy financing of shitcoin, but only a few self-consistent projects on the DeFi track are still full of vitality. ERC721 Token was raised by CryptoKitty, but the current bleak market feedback seems to prove that raising cats with cats cannot maintain a healthy ecology. Just as the stablecoins in the ERC20 protocol family have completed the mission of value hedging in market fluctuations, if NFT does not have actual utility, but only as cats and dogs for the recreational speculation of the rich, it is destined to go to zero.

We believe that the Ethereum Naming System (ENS), which is currently buried in various NFT markets, is firstly an application scenario that is compatible with the blockchain, and secondly, it is a rigid demand that cannot be replaced in a better Web3 experience for users. The annual fee model used in the comparison can better solve the problem of cybersquatting, and its vision of accessing the global DNS domain name in the future makes it promising to feed back the Ethereum ecosystem.

Furthermore, from the perspective of Token economics, our domain name is no longer an asset hosted by a third party. After Tokenizing each ENS name, the user becomes the real master of each domain name, and the code and cryptographic weapons defend it. Domain names are such a scarce private property. The endogenous property of the blockchain is value transfer. In the domain name system, the value transfer scenario is truly expanded. There is no need to wait for the long-term oracle to go online. The domain name itself is an endogenous on-chain asset and it has value.

The fascination of ENS is similar to many DeFi projects. Developers do not need to submit an application for using Dai to Maker. Instead, they can apply this money lego directly to their projects. Dapps do not need to be audited by anyone. The smart contract of ENS is there, directly access it, and the user experience can be upgraded.

On December 2nd, a visualization tool developed by Dune Analytics analyzed ENS, launched the beta version, and got a lot of interesting statistics.

As of December 3, the number of Ethereum spent on ENS has reached 170,000 (statistics are derived from the Value value in event Hashed registered). This number includes those that were locked in contracts in the past commit-reveal auction model The number of Ethereum also includes the amount of Ethereum directly spent by users in short domain name auctions and the new annual fee model. As an inappropriate comparison, 170,000 Ethereum in the DeFi pluse can be among the top 6 on the DeFi track. The old domain name space ship under the leadership of ICANN has a hard time turning around, and the more responsible attitude towards users is not to subvert the DNS, but to respect the existing namespace and strive to become the driving force in the transformation of the old system. The ENS ecosystem does not create more TLDs, but chooses to use DNSSEC to access traditional TLDs including .com, .org, .xyz. Even aside from the blockchain project, starting in May 2017, ENS, which has only been launched for two years, is definitely one of the most successful new gTLDs.

The .eth suffix, which has only been launched for two years, ranks 15th in the new gTLD approved by icann. ENS has achieved the development trend of not losing the traditional TLD on the blockchain where the infrastructure has not yet been rolled out. ENS that supports multiple chains will grow with the development of the blockchain ecosystem (not just Ethereum). ENS is not limited to Ethereum, but can be used as an intermediate layer protocol for all public chains. Fang, but will soon access ENS).

The market has crashed, how to change ETH to DAI to hedge the fastest?

Before the emergence of DEX, we must first charge Ethereum in the wallet to the exchange, sell it and then buy DAI, and then withdraw the coin. Wait, a lot of exchanges have designed a 24-hour lock-up time, and they want to withdraw coins until tomorrow.

After the emergence of DEX, through the DAPP browser, jump to the corresponding DAPP interface, and log in directly with the wallet, eliminating the steps of charging and withdrawing money. The entire process can be completed with two to three transactions.

However, I just want to replace ETH with DAI. Is it really necessary to open the DAPP browser?

Already smart people have combined dex and ens. Now.eth uses the Uniswap decentralized exchange and the ENS domain name to solve this problem with a single transaction. Now just hit eth to dai.now.eth. After the transaction is successfully sent, it will be directly exchanged to the account returned by DAI according to the market price of Uniswap. The entire process does not need to open any DAPP at all, and if the transfer can be resolved, it is directly solved by transfer. Without ENS, such a user experience cannot be obtained at all. 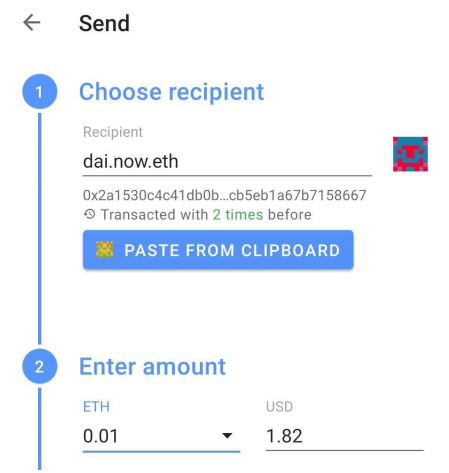 There is no simpler interactive operation than transfer. Now.eth makes full use of callback functions to solve the problem. Extending it, even if the original contract does not have a callback function like uniswap, you can write a contract with a callback function to make a call to the contract. In theory, any original complex DAPP operation can be realized through a transfer. now.eth gives a name to this kind of DAPP without UI, which can be used in any wallet through transfers-DAWNS, which is an interesting development path for DAPP in the future.

Imagine that without ENS, although these contract calls can be implemented, which user can remember the contract address of a 160-bit unsigned number?