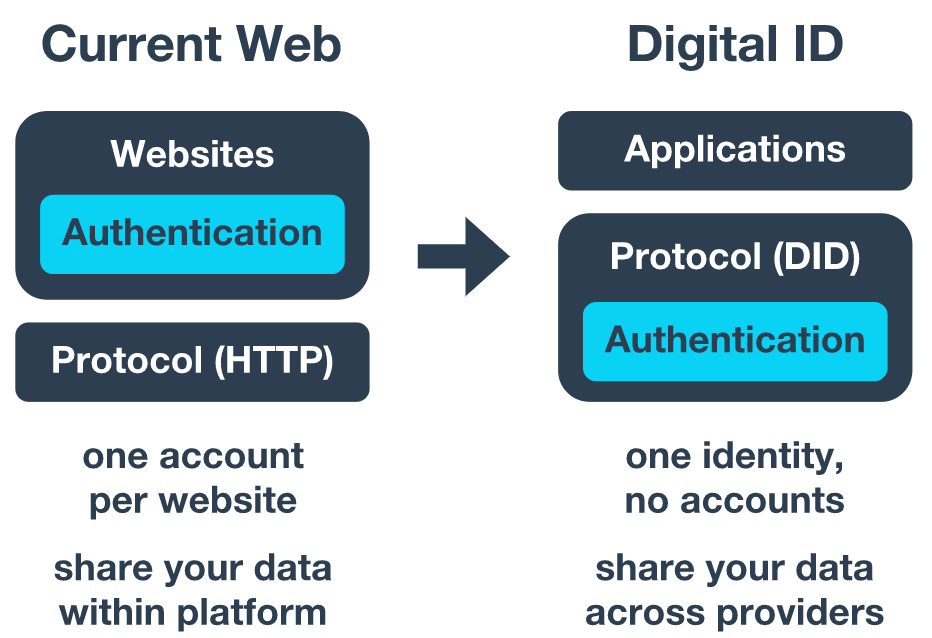 Over the past five years, with the advent of next-generation technologies, the identity management space has undergone a renaissance that transitions from complex systems such as CA and Microsoft Active Directory to more open systems such as Okta, Ping Identity, One Login, etc. API-driven platform, and the corresponding stack in cloud platforms such as AWS, Azure, or Google Cloud . These platforms move the capabilities of identity from private systems to open protocols such as SAML, OpenID Connect, and more.

Identity-based protocols : Currently, a large percentage of identity management solutions use protocols such as SAML and OAuth2 to interact.

Basic contradiction in enabling identity in the licensed blockchain

Putting all of these together, we get a picture where the user identity in the enterprise is distributed across many systems, but is enforced by the centralized identity provider. When it comes to identity, we need to address two fundamental contradictions between current enterprise architecture and blockchain technology . 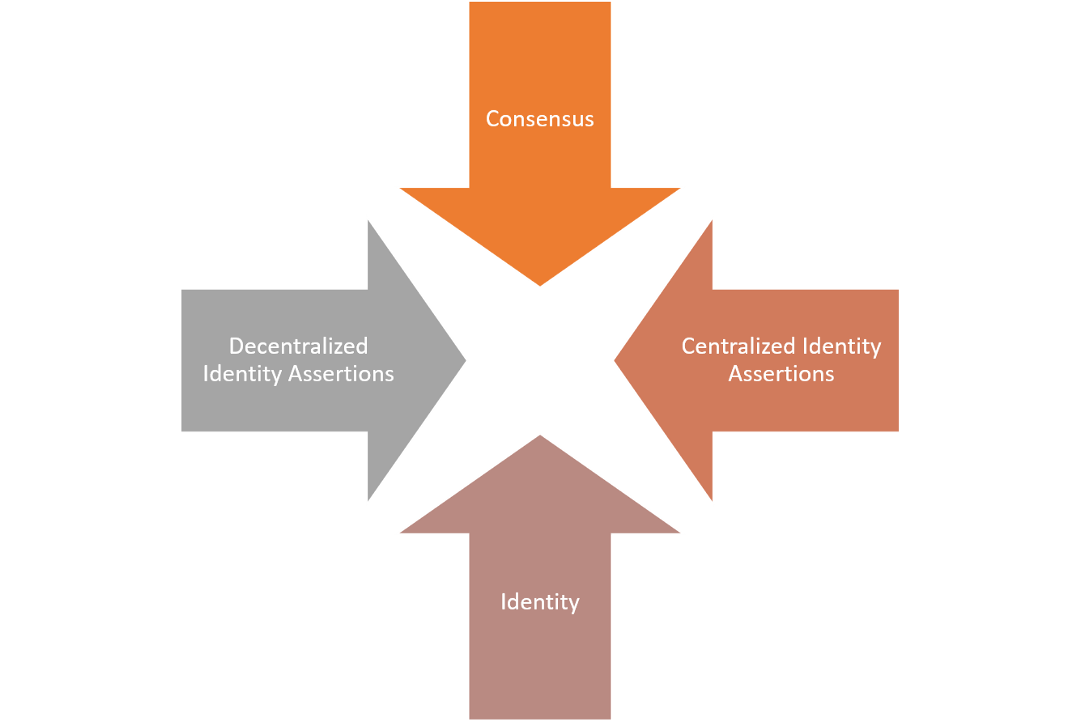 Enabling identity management in a licensed blockchain scenario is not only a technical challenge, but also a contradiction with the underlying principles of the decentralized layer . The biggest contribution of blockchain technology is that in the history of computer science, we have a model for the first time that can trust mathematics and cryptography rather than relying on centralized parties. Based on this principle, blockchain architectures are developed based on consensus protocols such as Workload Proof (PoW) or Proof of Entitlement (PoS), which rely on calculations to make decisions. In the decentralized world, identity is not a basic building block because dynamic networks can achieve optimal decision making .

The computation-based blockchain consensus model is in stark contrast to enterprise solutions . In this sense, in a world of known identities, consensus agreements provide very little information.

The current architecture of the identity management system relies on a centralized gateway administrator to create assertions about user identities , and it is no easy task to coordinate this model with a distributed ledger architecture. Ideally, we need a model that allows identity assertions to be encoded and distributed to the relevant network in an encrypted manner over the chain .

Building a decentralized identity module in the licensed blockchain

To address these challenges, there are some technical components that are very relevant to the licensed blockchain architecture.

Proof of Authority (PoA) is a consensus mechanism proposed by Gavin Wood, co-founder and former chief technology officer of Ethereum in 2017. This consensus model leverages the value of identity and relies on a limited number of block verifiers, which means that being selected as a block verifier relies not on the cryptocurrency of the mortgage but on the personal reputation. Therefore, the authority proves that the blockchain is protected by an arbitrarily selected verification node with a trusted entity.

In an enterprise blockchain scenario , the PoA consensus is important because it leverages the existing identity of users and systems , rather than relying on computational challenges. There are a number of license chain PoA consensus implementations that have several implementations related to the licensed blockchain, including parity and Microsoft Azure.

For the past 20 years, Microsoft has been one of the leaders in identity management, but even they realize that the blockchain needs a new identity model to run. Inspired by DIF, Microsoft recently proposed a forward-looking architecture to support the decentralized identity of the blockchain. 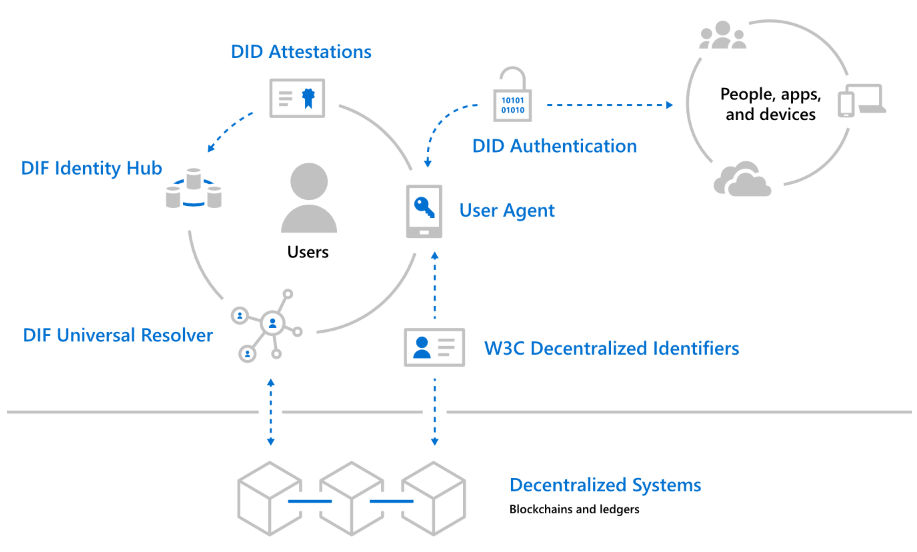 DID User Agent : The User Agent application helps create DIDs, manage data and permissions, and sign/verify claims with DID links . Microsoft will offer a wallet-like application that acts as a user agent for managing DIDs and related data.

DIF Universal Parser : A server that uses a set of DID drivers to provide standard lookup and parsing methods for cross-system DIDs.

DID Certification : Certifications signed by DID are based on standard formats and protocols. They enable identity owners to generate, present, and validate claims , which form the basis of trust between system users.

Under the framework of the licensed blockchain, the decentralized identity protocol establishes a clear bridge between the traditional enterprise identity management system and the blockchain DApps.

The concepts of authentication , declaring, and decentralization are some of the most important principles of the decentralized identity model. An interesting idea is to combine the concept of decentralization with a zero-knowledge proof protocol (such as zk-SNARKs) to add another layer of privacy to DIDs while allowing other protocols to verify identity . This concept can be called zero. Knowledge identity is stored and accepted by protocols such as uPort.

As a new technology, decentralized identity has some relevant cases to provide inspiration for the securities-based certification agreement .

uPort : uPort has been steadily building a set of protocols and solutions for managing identities in decentralized applications. The current stack is compatible with Ethereum Smart Contracts and can be used in licensed blockchain applications . 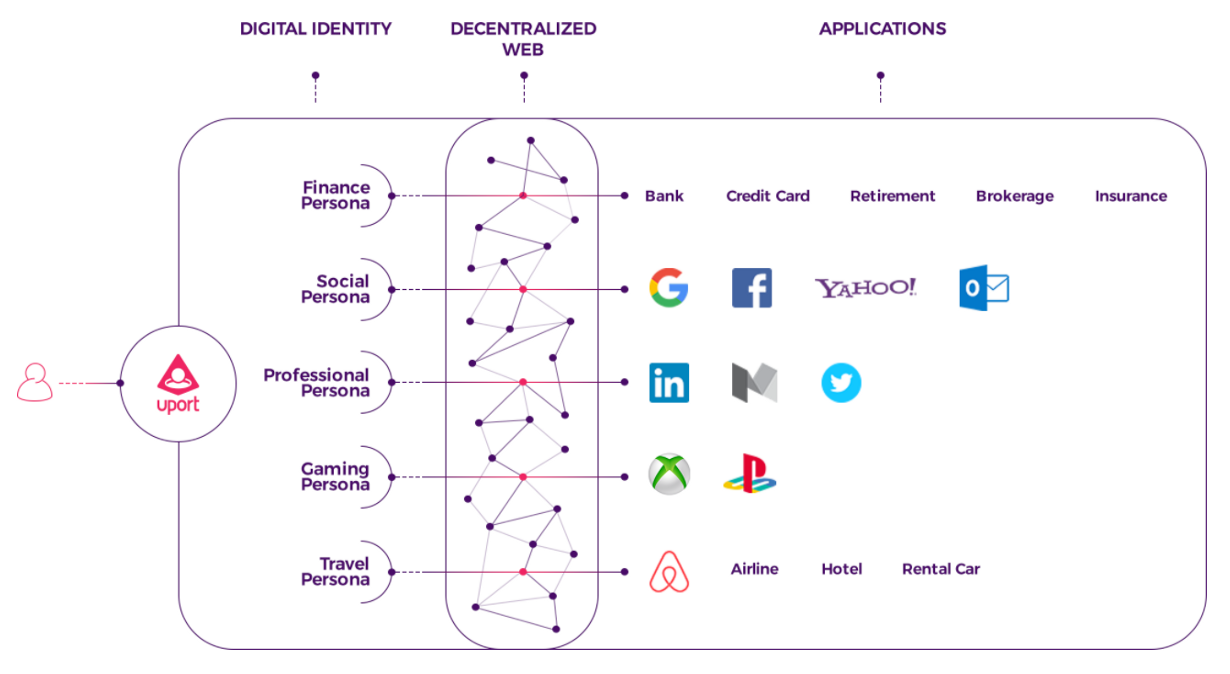 Azure BaaS : The Azure team has spoiled the core protocols of different blockchains to take advantage of Azure Active Directory identities. A recent example is the implementation of the PoA Consensus Protocol in the Ethereum application . 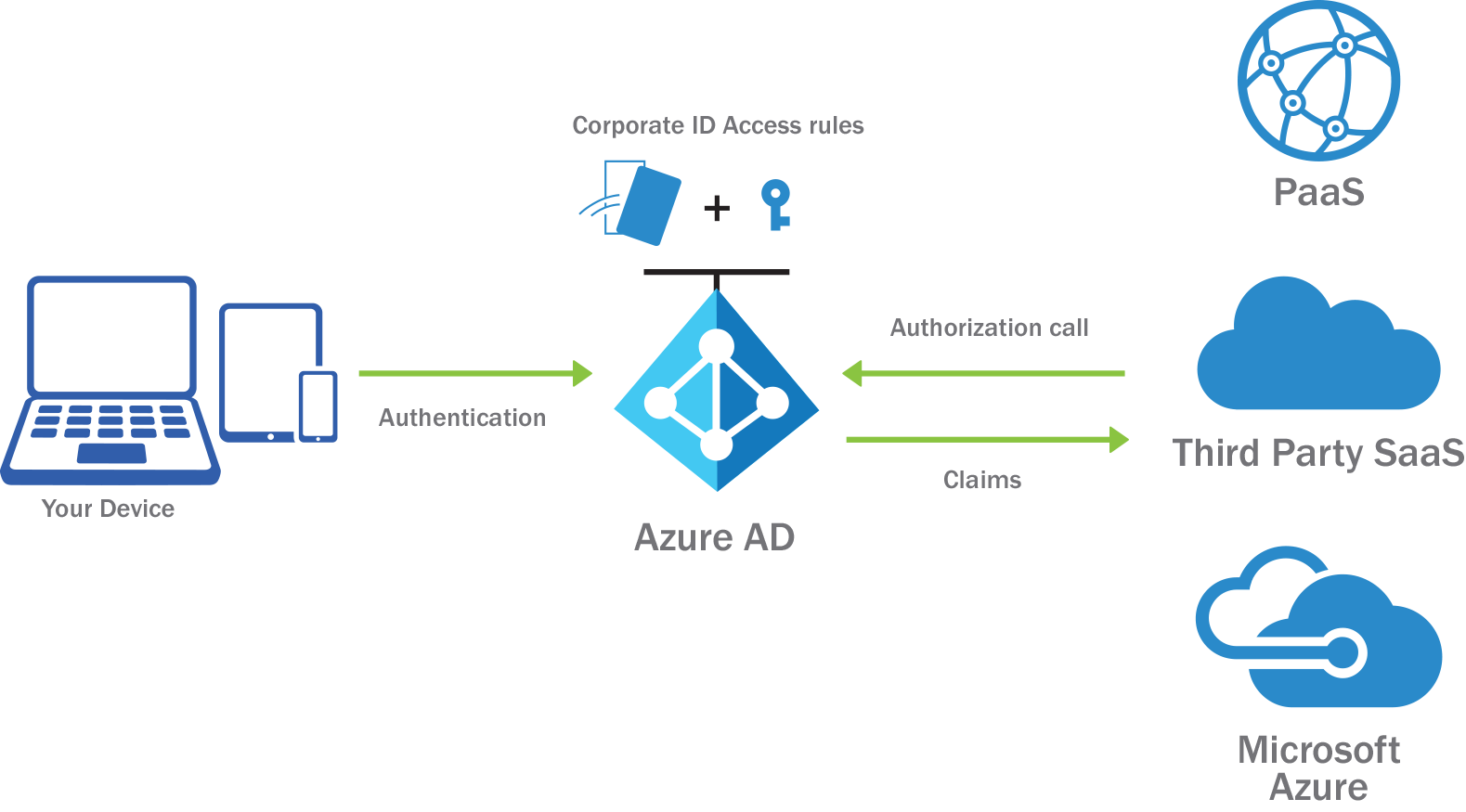 Sidetree : It is a combination of code-level components, including deterministic processing logic, addressable content storage abstraction, and stateful verifier that can be deployed in a Tier 1 decentralized ledger system (such as a public blockchain). On to generate a Layer 2 DID network without permission .

Hyperledger Indy : Indy provides one of the most complete stacks to support identity management . The current version of Indy includes tools and libraries that are some of the most common modes of implementing a decentralized identity solution.

As one of the basic modules of the blockchain application , decentralized identity is still in the process of being adopted by the mainstream , and still needs to solve the problem of how to connect with the real world . However, some organizations are working hard in this area. For example, the Decentralized Identity Foundation (DIF) is working to bridge the gap between traditional identity systems and blockchains . Although there are some protocols and tools in this area, enabling identity capabilities in enterprise blockchain solutions will still be a fairly complex task that requires the joint efforts of the blockchain industry and technology companies .

David Marcus: I started to appreciate Bitcoin very early, but it is not a good trading medium.

In the recruitment season of the year, the police reminded the companies that advocated the new concept of new words such as “blockchain” and “digital currency”. 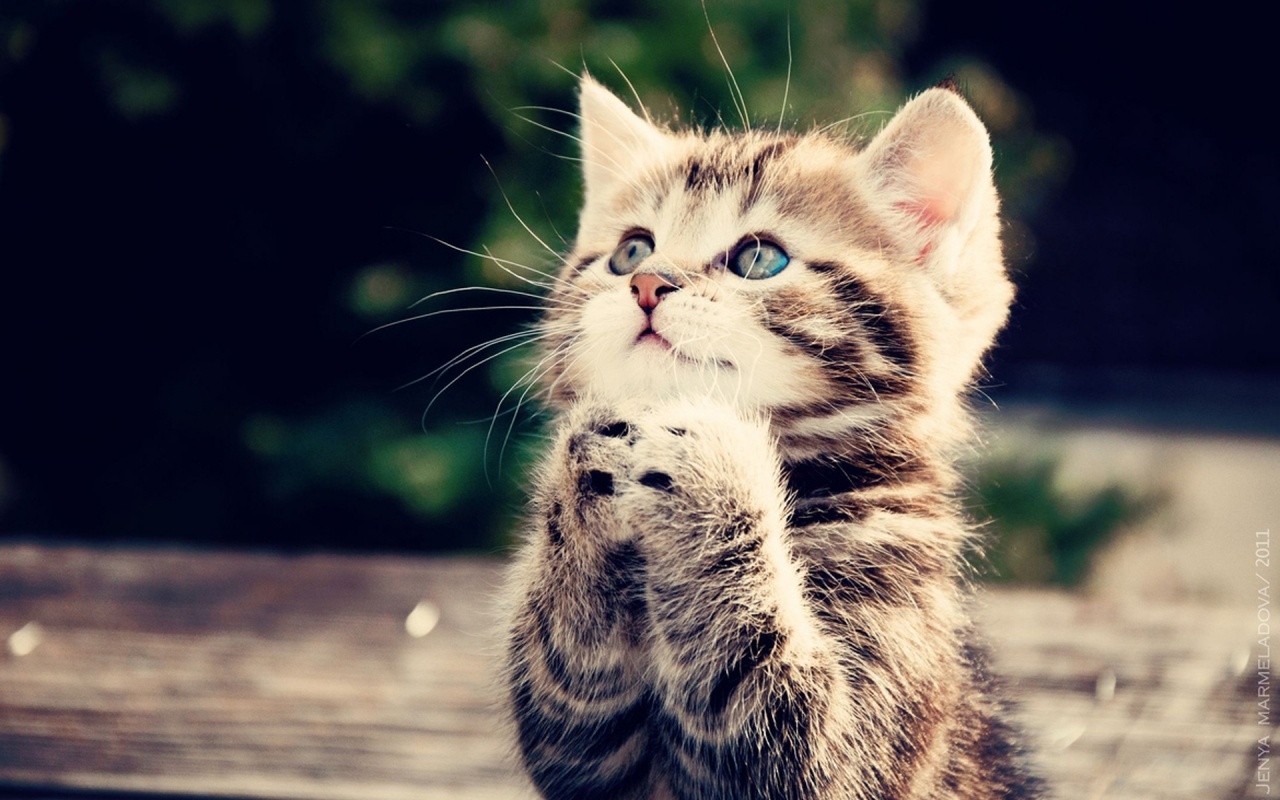 Xiao Lei: The Politburo collectively studies the “blockchain”, and China and the United States compete for the commanding heights of technological innovation.