Through the acceleration of procurement and bidding, we can understand the corresponding layout of the government.

Recently, the pulse of the mutual chain has counted the procurement information of blockchain-related projects announced by the government bidding network in 2018 and 2019. In 2018, there were 14 government bidding projects related to blockchain. By 2019, the number of projects has more than doubled, with a total of 31.

From the perspective of the winning bidders, compared with large-scale technology companies such as BAT, small and micro enterprises are more involved in the government's blockchain bidding activities, and have become popular. In 2019, the highest bid price for government procurement projects based on blockchain is 8.995 million yuan. This procurement project is a "Blockchain-based Development Zone Government Big Data Platform Project" initiated by the Information Technology Office of the Beijing Economic and Technological Development Zone Management Committee. It was also awarded by Shenzhen Miracle Smart Network Co., Ltd., a small and micro enterprise.

Subject of tendering: more regional departments and institutions will participate in 2019

In recent years, especially in the recent past, many blockchain procurement projects have been launched. So who initiated these projects?

If we focus on the Beijing area, it can be seen that in 2018, only the China Cyber ​​Security Review Technology and Certification Center conducted three purchases around the research on blockchain technology security assessment technology and certification needs. In addition, national institutions such as the Procuratorate Technology Information Research Center of the Supreme People's Procuratorate, China Industrial Economics Federation, China Press and Publication Research Institute are all engaged in the procurement of blockchain projects.

In 2019, Beijing has more regional departments and institutions to participate. In addition to the China Welfare Lottery Issuance Management Center, the Water Transport Science Research Institute of the Ministry of Transport, and the China Academy of Information and Communication Technology, there are also Beijing Municipal Science and Technology Information Research Institute, Beijing Haidian District Government Service Administration Bureau, Beijing Finance and Trade Vocational College And other agencies for procurement and tendering.

Most of the remaining regions are also involved by regional agencies. In 2018, the procurement of the Sichuan Province blockchain project was initiated by the Chengdu Hi-tech Industrial Development Zone Planning and Land Construction Bureau, and Beihang (Sichuan) Western International Innovation Port Technology Co., Ltd.

In 2019, more regions such as Fujian Province, Yunnan Province, and Guangxi Zhuang Autonomous Region will participate.

Procurement project: 6 times the number of government blockchain applications in 2019 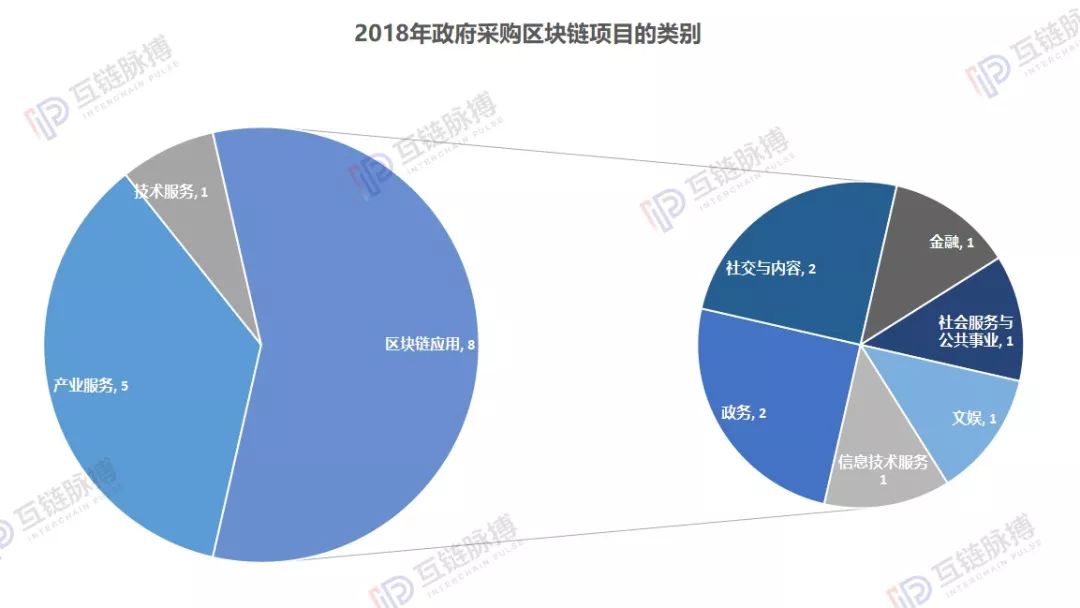 The pulse of each other chain then observes the blockchain application projects of government affairs. In 2018, the government application of blockchain government affairs was focused on the judicial and micro-government fields. First, in December 2018, the Procurement Technical Information Research Center of the Supreme People's Procuratorate conducted a tender for the "Intelligent Procurement and Innovation Institute Blockchain Electronic Data Storage Platform" tender; the other was, in July, Chengdu's high-tech industry The bidding of the Development Zone Planning and Land Construction Bureau is based on the "High-tech Zone Network Reservation Taxi Micro-Government Platform Purchase Project".

By 2019, the application of blockchain government affairs will mainly focus on housing provident funds. 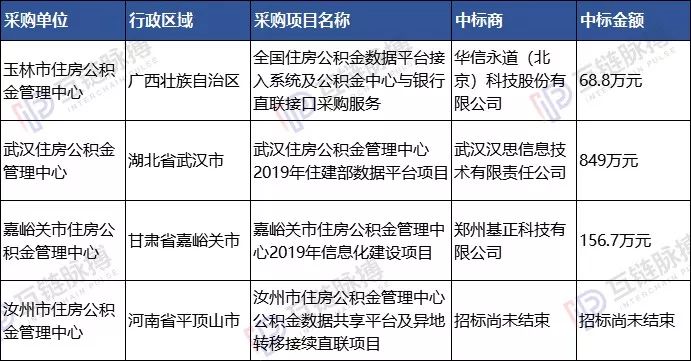 In addition to the housing provident fund field, the blockchain government application in 2019 also includes aspects such as digital identity, customs supervision, and taxation. For example, the "Rongcheng Blockchain Government Integrity Assessment System Project" initiated by the Rongcheng Social Credit Management Office is centered on digital identities; the "Tianjin Customs Technology Division Blockchain Technology Service Project" initiated by the Tianjin Customs Logistics Management Center of the People's Republic of China "It belongs to the customs supervision in the field of government affairs; the" State Administration of Taxation Yunnan Provincial Taxation Bureau's Electronic Archive System Construction (Optimization and Upgrade) Project "initiated by the Yunnan Provincial Taxation Bureau of the State Administration of Taxation belongs to the tax category.

In the category of blockchain applications, in addition to government affairs, the financial sector also occupies a certain proportion.

In 2018, the "Blockchain Intelligent Reinsurance Operation Management Platform" project of the People's Property and Casualty Insurance Company of China was an insurance application in the financial field.

In 2019, the four applications in the financial field will focus on financing, payment, and bills. 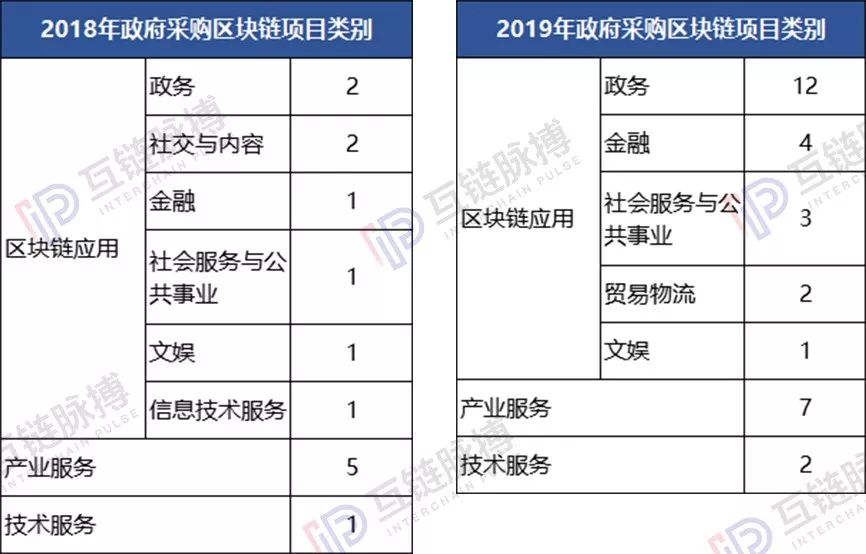 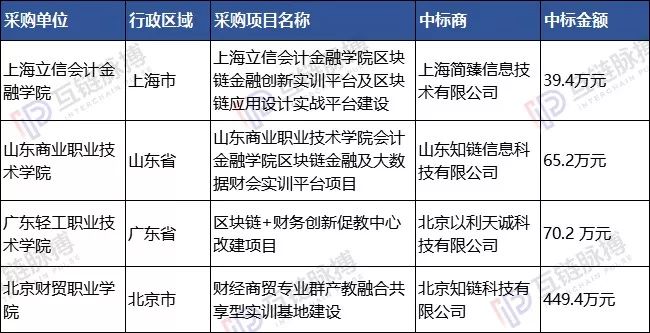 The mutual chain pulse observation, the development of this type of project is to provide various colleges with a block chain teaching management system, a block chain experimental scientific research platform, a block chain-based related curriculum and related practical training. This will enable students to become familiar with blockchain technology through the platform and empower them with related disciplines.

Successful bidders: Small and micro enterprises are the most popular and the highest bidding price reaches more than 8.5 million

In addition, the procurement of blockchain projects often follows the "closest principle". Therefore, in the past two years, the successful bidders for government procurement of blockchain projects have been concentrated in Beijing. By 2019, the rise of science and technology enterprises in Guangdong has leapt to the second place in the number of successful bids, followed by Shandong Province.

And if you look at it from the perspective of the winning amount, in 2018 only the blockchain-based projects, the highest winning amount is the "Community Correction Blockchain Data Sharing and Linkage Platform" of the Chancheng District Judicial Bureau of Foshan City. The project was finally awarded by Light Load Infinite (Beijing) Technology Co., Ltd. at a price of 4.94 million yuan.

It is reported that Light Load Infinite was established in 2016. It is an innovative business group under Century Internet Holdings and belongs to small and micro enterprises. In 2014, the technical research and development and application research of the Atlas blockchain was carried out, and the construction of a new generation of network information business infrastructure supported by innovative technologies such as the blockchain was promoted.

Looking again at 2019, the highest bid amount for the blockchain project is the “Blockchain-based Development Zone Government Big Data Platform Project” of the Information Technology Office of the Beijing Economic and Technological Development Zone Management Committee. Ten thousand yuan won the bid. Founded in 2013, the company is an AIOT (Artificial Intelligence Internet of Things) system and solution provider, which also belongs to small and micro enterprises.

The third place in the bid amount was the "Blockchain Scientific Device Virtual Infrastructure" project of Pengcheng Lab. Shenzhen Xinwangdian Technology Co., Ltd. won the bid with 4.662 million yuan. The company was founded in 2005 and is a desktop centralized management technology research and development company.

Observing several companies with higher bids, we can see that government-purchased blockchain projects are not only undertaken by small and micro enterprises. And it's not just about blockchain companies. On the contrary, companies that have both blockchain technology and other information technologies seem to be more favored.