This article from the Medium, the original author: Anthony Bertolino 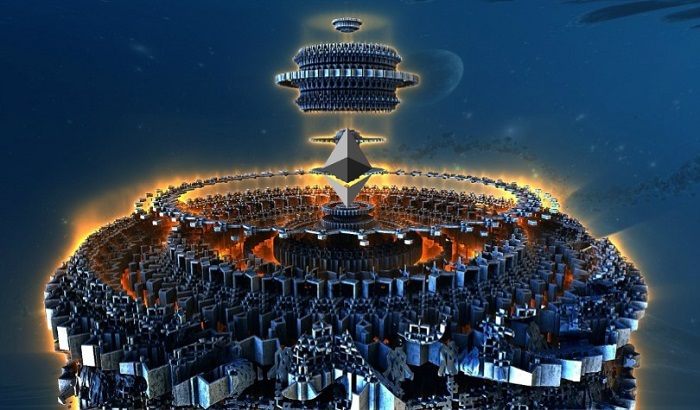 No matter if you are an investor, a trader, or just an ordinary person, now you have to get up to 12 points to take a look at this article.

Let me ask you a question first: Ray Dalio, Bitcoin minimalist, conspiracy theorist, gold fanatic, what do they all have in common?

No more circles, the answer is:

They all believe that the current global financial system will undergo major changes in the near future.

Ray Dalio, the founder of the well-known investment fund company Bridge Water Associates, has recently gone to great lengths to remind the market of one thing: a major change in the financial system is coming. In fact, Ray Dalio has been very active on the global stage, and has experience in the media industry, and even publishes a book for free, and his purpose is to remind others that a shift in investment paradigm is about to happen.

2. What is a reserve currency?

3. How does our fiat currency system work?

4. A major change is coming. Are you ready for a huge debt crisis?

Do you know the answers to these questions?

In fact, in the history of modern financial development, the most important change is the end of the Bretton Woods system and the gold standard. Since 1971, the dollar has become the world's legal currency. Overnight, the U.S. dollar changed: from being anchored by gold reserves, to being backed by the trust of the central authority—the Fed.

Since then, the U.S. government has shown an unimaginable appetite for debt. The following chart illustrates the trend of U.S. government debt over the past seventy years: 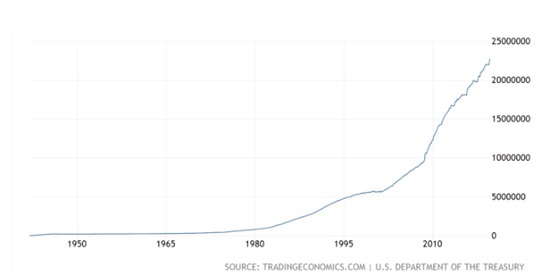 However, the United States is not the only country in the world that is "criminal" because in the past 50 years, almost all economies in the world have fallen into a debt frenzy. The following figure fully shows the global credit market debt Development trends in arrears: 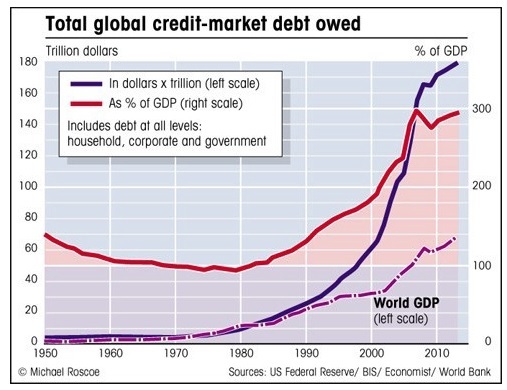 Generally, once debt reaches excess levels, the economy will experience deleveraging. According to the monetary policy tools that the US government chooses to deploy, they may implement a "beautiful" deleveraging strategy and burst the bubble that "blows out" in the past.

At the 2019 Annual Meeting of the International Finance Institute, Ray Dalio explained that the most powerful monetary policy tool of the past (reducing interest rates) is no longer useful because interest rates are now close to zero. The question is, when the interest rate approaches zero, what effect will it have on the future economy? Perhaps we can see the answer in the 10-year government bond yield chart below. Ray Dalio further explained that due to the current economic environment, the second-best monetary policy tool (printing money, or more academically: quantitative easing) is also unlikely to have much meaningful impact. Although the quantitative easing policy has indeed given a huge and positive boost to the economic recovery in the past, it now seems that it cannot function as it used to. According to Ray Dalio, it is time for people all over the world to need a brand new monetary policy tool and modern monetary theory (MMT) to cope with the coming paradigm shift. In response, he stated:

"During the paradigm shift, most people get trapped and do injuries when they do overly popular things. On the other hand, if you can understand these paradigm changes very keenly, then you can guide yourself well. , Or at least protect yourself from the negative effects of paradigm changes. "

According to Ray Dalio's analysis, the upcoming paradigm change is mainly caused by three reasons:

If you are a smart investor, then you first need to have a better understanding of your existing portfolio allocation. Assuming all portfolios remain the same, once the paradigm changes, it will definitely make you uneasy. Ray Dalio added:

"After the new paradigm arrives, it may no longer be safe to store your money in fiat currency and bonds. Bonds are a form of currency ownership. In order to repay debt, the government may continue to print currency to devalue the currency, although The easiest way to reduce the debt burden without increasing taxes is also the most controversial one. "

Ray Dalio further explained that digital currencies will have greater value, and depositing cash into vaults may now be an outdated method. In this case, most people will consider Bitcoin, in Ray Dalio's own words:

"Bitcoin's final fate may be like a BlackBerry, and everything will change when Ethereum comes along."

There is no doubt that Ray Dalio's point of view and the upcoming paradigm shift confirm one thing: we need to build a whole new financial system.

Welcome to Ethereum and the new open financial system

This open financial system will provide a new native currency in its own base layer. For Ethereum, their underlying currency is Ether (ETH). As the monetary policy is more superior, the value of Ethereum's native tokens will be Gradually exceed the value of the dollar. If Ethereum Finance is open to global citizens, regardless of nationality, age, race or gender, and provides many of the same functions as traditional financial systems, including credit, stocks, commodities, bonds, gold, real estate, stablecoins , Exchanges, insurance, and even identity systems, you can access these services as long as you can connect to the Internet.

One of the biggest benefits of this new open financial system is total transparency. Existing financial systems allow banks, financial institutions, and regulators to control the flow of information, which can easily lead to catastrophic events, such as the 2008 financial crisis, because these entities choose to disclose the information they want to disclose, and not just one person You can audit it, for example, you ca n’t go into a bank and tell them, “Hey, I ’m here to see your books.”

The situation of open finance is different, because in an open financial environment, all data can be made publicly available to everyone on the chain. The open financial system hopes to rebuild things from scratch through the two advantages of transparency and real-time data. If you're interested in tracking open financial activity, check out DeFi Pulse, DeFi Prime, and ETHHub.

Of course, it should be noted that we are at the beginning stage of this new financial system. As this system becomes more and more mature, we may also encounter various problems. But rest assured that so many dedicated developers and thriving communities are doing their best to ensure that the world has a new, fairer and accessible way of financial activity.

PwC executives: The unicorn in the encryption field can expand the ecosystem by acquiring auxiliary service companies

The data shows that the number of active addresses on the Ethereum chain is gradually increasing.