On December 5th, the People's Bank of China issued an announcement saying that it supports Beijing to take the lead in launching a fintech innovation supervision pilot in the country. Beijing Exploration will explore the use of flexible management methods such as information disclosure, product disclosure, and social supervision, and explore the construction of a prudent and inclusive Chinese version of the “supervision sandbox”.

Recently, the relevant person in charge of the Business Management Department of the People's Bank of China revealed some details of the "Beijing Regulatory Sandbox": Currently, it must be licensed financial institutions to enter. This is the bottom line and will not be included in online loans, virtual currencies and other institutions. There are projects launched by Fintech companies in cooperation with licensed institutions. In addition, some 46 fintech pilot projects approved in Beijing may enter Beijing's “regulatory sandbox” in the future. It is understood that the central bank, together with relevant departments, has launched fintech application pilots in 10 provinces, including Beijing, Shanghai and Guangzhou. At present, the working procedures, content and organizational structure of Beijing's "supervision sandbox" have been formulated.

According to statistics from the Science and Technology Daily, global fintech financing in 2018 was US $ 111.8 billion, a surge of 120% from 2017. Among them, mega mergers and acquisitions and acquisition transactions are the main factors driving global fintech, and regulatory technology and blockchain are highly sought after . According to iResearch data, in 2018, China's financial institutions invested 228.73 billion yuan in technology funds. By 2020, China's financial institutions will invest 403.47 billion yuan in technology funds, of which the proportion of cutting-edge technology investment will increase to 35.1%. 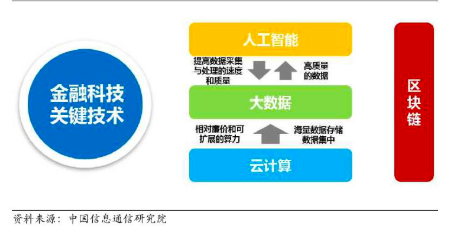 At present, China's fintech has experienced a regional development trend in the ecological structure. The number of fintech companies in Beijing, Shanghai, and Zhejiang occupies the top 3 in the country. According to data from enterprises, Beijing currently has more than 10,000 fintech companies and more than 2,000 blockchain-related companies.

Beijing proposed to build a Beijing financial technology and professional service innovation demonstration area last year. In October last year, the Beijing Municipal People's Government pointed out in the "Beijing Planning for the Promotion of Fintech Development (2018-2022)" that it will focus on supporting enterprises and research institutions as the main body to carry out research and development of key underlying technologies and cutting-edge technologies. A number of intellectual property rights and patents will be formed in the technological field as soon as possible to create a frontier for innovation in fintech.

Focusing on artificial intelligence and big data, comprehensively promote research and development and applications, and strive for a leading position in innovation at home and abroad;

With interconnected technology as the core, continue to promote technological progress and upgrade, and consolidate the foundation of financial technology;

Focus on distributed technology, strengthen the widespread application of cloud computing, and strive for mature applications of blockchain;

With security technology as the guarantee, escort for the innovation and development of financial technology.

In January 2019, in the comprehensive pilot work plan for the expansion and opening up of the service industry in Beijing approved by the State Council, it was clear that a national financial technology demonstration zone should be established in Xicheng District. In response to the “Beijing Regulatory Sandbox”, Huo Xuewen, director of the Beijing Municipal Bureau of Financial Work, said in July that the “Supervisory Sandbox” focuses on three areas: unified system access, and providing a secure, compliant, and efficient testing environment for enterprises. ; Credit restriction mechanisms such as active disclosure and public supervision; prudent and inclusive system rules such as third-party depository, product registration, and information disclosure.

Is blockchain the future of fintech? Blockchain broke away from cryptocurrencies in 2017 and began to enter the public vision in the form of pure technology. This year, it became a national strategic technology after the "1024" conference. Blockchain has become a trend.

The Goldman Sachs report shows that blockchain or distributed ledger technology can save the financial industry $ 5-7 billion in costs each year. IDC pointed out in the latest "Global Semi-Annual Blockchain Expenditure Guide" that the financial sector and the power industry have the most abundant and fastest-growing blockchain application scenarios. Global blockchain spending in 2019 will reach nearly $ 2.9 billion, compared with $ 1.5 billion in 2018, an increase of 88.7% is expected, and it is expected to reach $ 12.4 billion in 2022.

At present, the application scenarios of China's alliance chain are gradually enriching, mainly including cross-border payments, supply chain finance, bills, asset securitization, and public welfare donations. Traditional Internet companies and financial institutions such as major banks have greater demand and have developed rapidly. Ali, Baidu, Tencent, etc. have all created their own BasS. State-owned banks such as Industrial and Commercial Bank, China Merchants Bank, China Everbright Bank have also established their own alliance chain systems. It is worth noting that China's current public chain is still immature and lacks research on underlying key technologies.

In the "China Fintech Industry Research Report 2019", iResearch pointed out that the main difficulties of fintech landing at this stage are the difficulty of data sharing and the unclear value of the blockchain landing. Therefore, the main point of fintech's landing at this stage is to gradually penetrate into the main business scenarios such as blockchain + supply chain finance , and the issuance of digital currency by the central bank will allow bank-based financial institutions to accelerate the investment in blockchain scenario exploration and further realize The release of blockchain technology efficiency.