According to the statistics of the Zero One Think Tank, 215 blockchain concept stocks are distributed in the five cities of Beijing, Shanghai, Guangzhou, Shenzhen and Hangzhou, with 43 in Beijing, 40 in Shenzhen, 13 in Hangzhou, 10 in Shanghai and 8 in Guangzhou. From the perspective of the industry, companies in the fields of computer, media and electronics are mostly. The blockchain business involved in concept stocks is dominated by physical application scenarios, accounting for 56.3%, followed by financial application scenarios, accounting for 14.0%, and infrastructure technology & technology solutions, accounting for 13.5%.

The development of 215 concept stocks' blockchain business is different. Nearly 30 companies have publicly stated that they have not actually launched business. At least 30 companies have launched blockchains through investment, holding, participation in shares or setting up subsidiaries in blockchain companies. Business and other methods are related to the concept of blockchain.

In the past few years, there has been constant noise around the blockchain and digital currency industries, but the role of blockchain technology in promoting the digital transformation and upgrading of the physical industry has been explored and recognized by more and more companies, and it has also been the highest in the country. Layer of affirmation. Driven by market, policy and other factors, many companies are actively deploying blockchain business. Among them, the listed company group has become more active in developing blockchain-related businesses by virtue of its capital and technology reserve advantages. The layout in the blockchain field can also better reflect the relatively advanced development of the industry.

(I) Listed companies in Beijing, Shanghai, Shenzhen and Hangzhou are active

In terms of geographical distribution, the listed companies registered in Guangdong and Beijing are the most active in the blockchain field. Among them, there are 57 blockchain concept stocks in Guangdong Province and 43 in Beijing. 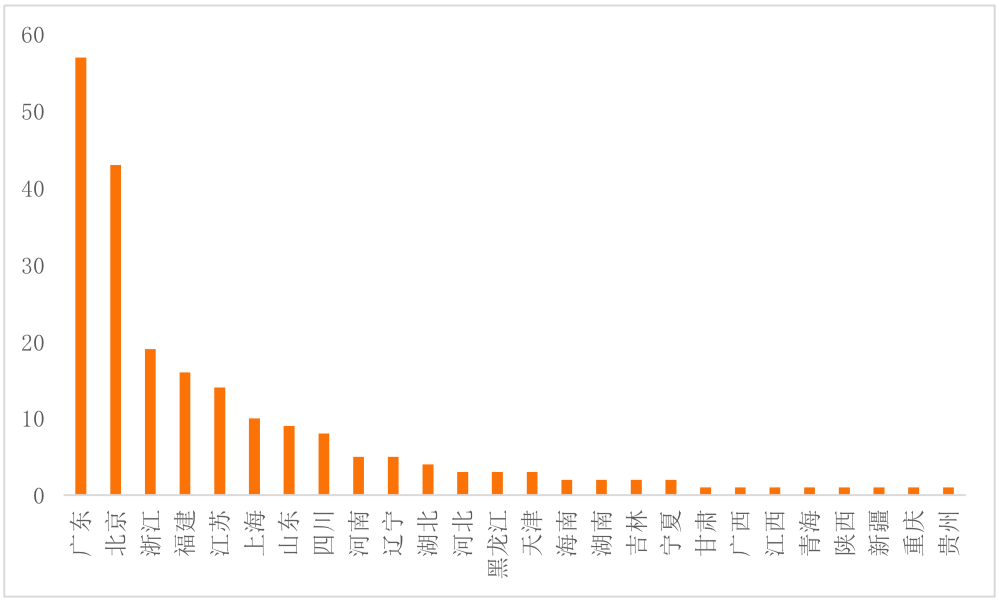 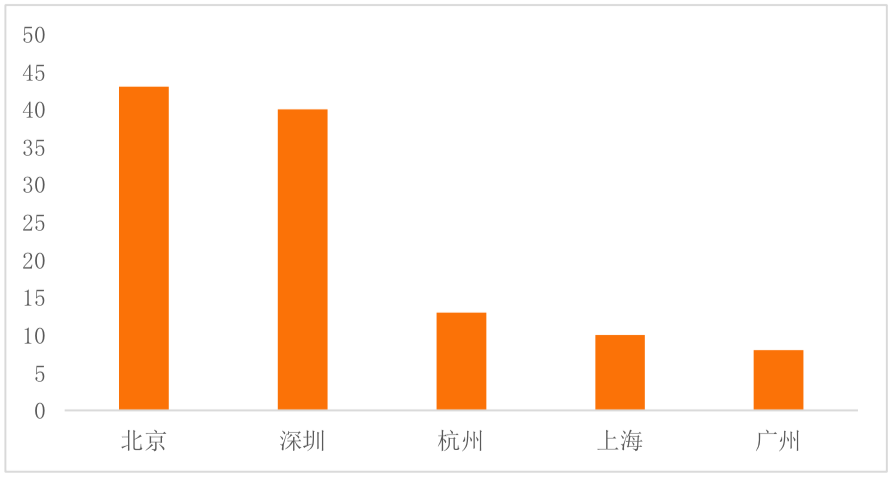 The State Council mentioned blockchain for the first time in the "Thirteenth Five-Year Plan" National Information Plan released in December 2016, emphasizing that it is one of the key cutting-edge technologies and needs to strengthen its innovation, testing, and applications. In June 2017, the "13th Five-Year Plan" for China's financial industry's information technology development plan issued by the central bank also clearly proposed to actively promote the application of new technologies such as blockchain and artificial intelligence, and at the same time organize the trial of national digital currencies.

In addition, from the perspective of market atmosphere and industrial structure, first-tier cities are high-tech industrial clusters and are most sensitive to high-tech such as blockchain. They are more likely to develop R & D applications on such technologies. At the same time, the advantages of first-tier cities in terms of talents and funds are also more conducive to promoting the application of blockchain technology.

From the perspective of industry distribution, the industries to which the concept shares belong are mainly computer (84), media (33), electronics (12), and communications (11).

Flushing is a leading Internet financial information service provider in China. Its main business is to provide software products and system maintenance services, financial data services, etc. to various types of institutional customers at home and abroad. In July 2019, Flush stated on the interactive platform that certain blockchain-related technologies have been reserved, and actively explored the application of blockchain-related technologies in the field of Internet financial information services.

Figure 5: Proportion of concept stocks in the seven business categories 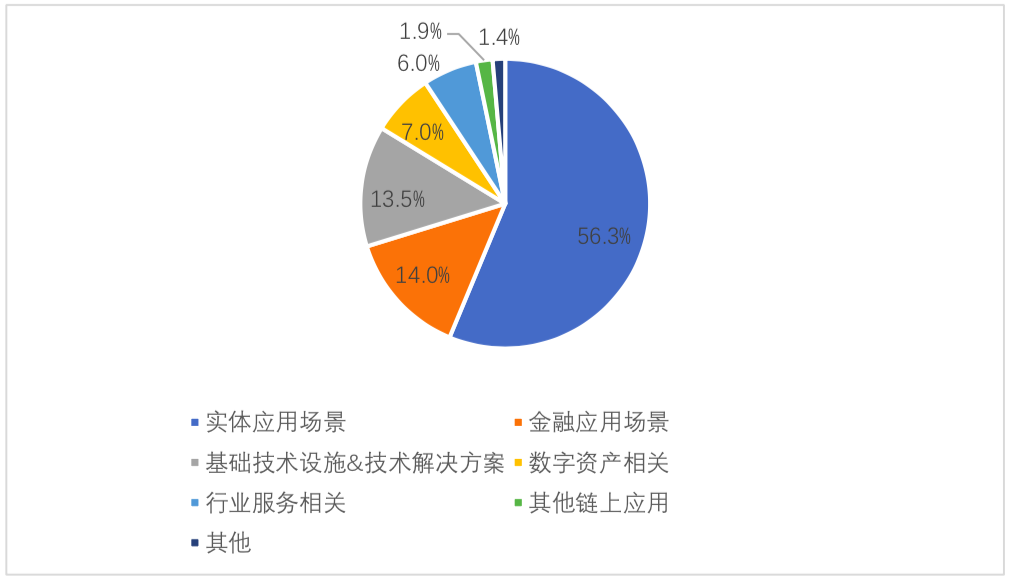 From the perspective of the blockchain business mainly involved in concept stocks, the number of enterprises in the physical application scenario category is the largest, accounting for 56.3%, and involves specific applications such as traceability, certificate storage, e-government, Internet of Things, supply chain, and digital marketing. The second is the financial application scenario, accounting for 14.0%, involving supply chain finance, credit reporting, insurance, and points. And infrastructure technology & technology solutions, accounting for 13.5%.

(I) Nearly 30 companies have not actually launched blockchain business

According to the incomplete statistics of Zero One Finance, as of November 15, at least 20 companies out of 215 concept stocks have demonstrated through the investor exchange platform or other public channels that the companies are not currently conducting actual blockchain business, and at least 6 The company indicates that it is carrying out related R & D or has related reserves.

Table 1: Concept stocks that have not actually launched a blockchain business

Table 2: Concept stocks that have been researched on blockchain

(II) At least 30 companies are associated with the blockchain through investment, equity participation, etc.

Among the 215 concept stocks, at least 30 companies are associated with the blockchain concept by investing in, holding stocks, participating in shares or setting up subsidiaries to conduct blockchain business. Among them, Xinhu Zhongbao, Zheda Wangxin, and 3D Communication are all concept stocks related to the fun chain of blockchain enterprises. Baosteel Co., Ltd., Xinhuanet.com, 236, and the venture-backed black horse companies have related products or services to obtain blockchain information services for the record.

Third, the related listed companies from the blockchain record information

Since 2019, the Cyberspace Office has released two batches of 506 blockchain information service filing numbers before and after, involving 414 companies and 42 associated listed companies (the blockchain service belongs to the company itself or its subsidiaries, Sun (Owned by companies, joint stock companies). 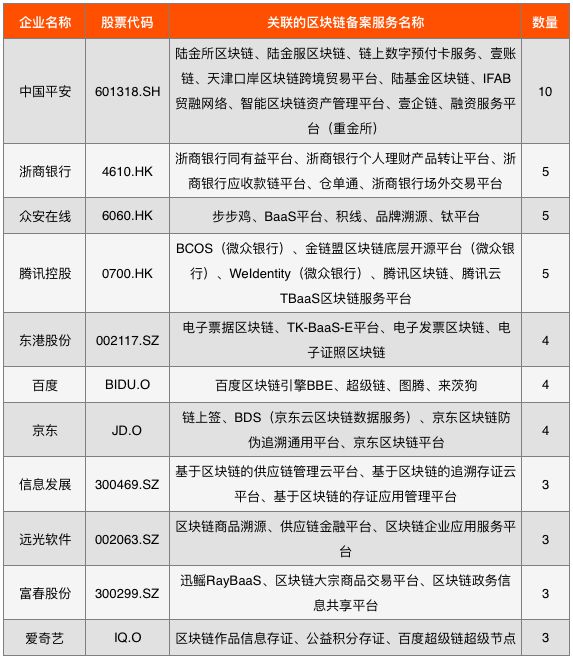 As shown in the table above, the three traditional Internet giants of Ali, Tencent and Baidu and the two e-commerce giants of JD.com and Suning Tesco have corresponding blockchain information service filings.

In terms of financial institutions, there are four banks, such as Industrial and Commercial Bank of China, Ping An Bank, Zheshang Bank and Bank of Jiangsu, as well as Ping An and Zhongan Online.

In addition, enterprise service software provider Kingdee International, a good future in the field of education, Midea Group in the field of home appliances, and courier are also leading SF Holdings, and BGI in the field of medicine and biology are on the list of blockchain information services.

In the development and application of emerging technologies, Internet giants are always at the front end, and the blockchain business of giants such as BATJ is also the reference focus of other domestic companies. In addition, the financial industry is considered to be the most suitable application scenario for blockchain technology, and financial institutions' application of blockchain technology has also attracted much attention. In this section, Tencent, one of the Internet giants, and Zheshang Bank and ZhongAn Online, which are known as the "first block chain banks", will be taken as examples to show the progress and development status of the blockchain business of listed companies.

Among the three traditional Internet giants, Tencent and Ali were the first to deploy blockchain. Tencent established a blockchain research and development team at the end of 2015.The development of its blockchain business has evolved from early technology research and development to the construction of the Baas platform, opening it up to a large number of business scenarios in 2017 and 2018, and at the same time, it continues to promote ecology Cooperation is established. 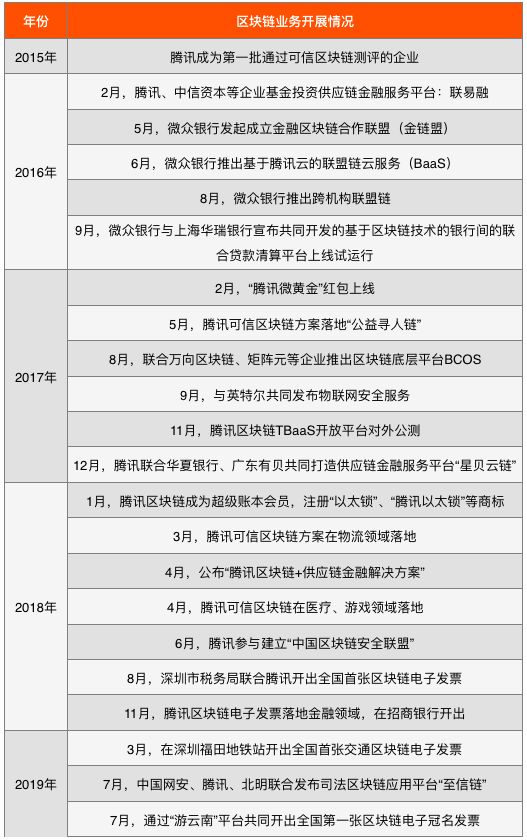 Source: Incomplete statistics based on publicly available information on the Internet, Zero One Think Tank

ZhongAn Online (full name "ZhongAn Online Property Insurance Co., Ltd.") is the first Internet insurance company in China. Its shareholders include Ant Financial, Tencent, and Ping An of China. It was approved by the Banking Regulatory Commission to open in 2013. September 2017 Listed on the Hong Kong Stock Exchange. In the development process, ZhongAn Online even more emphasized the use of science and technology to reshape the insurance value chain. In terms of the development and application of blockchain technology, Zhongan Online has established a blockchain team since 2105. According to information, the team has submitted a total of 129 blockchain-related patents so far, and 112 can be checked through public examination.

In November 2016, Zhongan Online established a subsidiary, Zhongan Technology, which will conduct business development and layout in the blockchain field. While using blockchain technology to improve the operating efficiency and quality of its insurance business, it will also Output blockchain solutions to empower the industry.

In October 2018, ZhongAn Technology launched an insurance product-based blockchain asset protocol, the Policy Backed Token (PBT), to achieve the tokenization of insurance assets. The application scenario of the insurance token is mainly used in the reimbursement of medicines, which can be realized without advances, and reimbursement at the same time.

In the filing of the blockchain information service, there are 5 items of record information associated with ZhongAn Online, including: Step by step chicken, BaaS platform, Jiji, brand traceability, titanium platform.

Among them, the BaaS platform is a product launched to reduce the threshold for enterprises to use the blockchain. It can realize sub-module design and visual operation. Jiji is a point issuance system for point marketing and point system construction. The brand traceability platform provides Based on the blockchain's traceability and certificate storage function, the product information can be chained and anti-counterfeiting queries can be implemented. In the field of traceability, Zhongan has precipitated technologies such as diamond traceability and food safety traceability. The titanium platform includes titanium contracts, titanium certificate deposit services, Users provide a series of cloud services such as electronic contract signing, certificate deposit, verification, and certificate issuance.

Afterwards, Zheshang Bank began to explore the asset securitization of blockchain receivables. In August 2018, it successfully issued the "Zheshang Chainrong 2018 Phase I Enterprise Receivables Asset-Backed Notes." Data show that as of now, Zheshang Bank has issued a total of 12 issues of corporate receivable asset-backed notes (ABN) for a total of 5.985 billion yuan, serving hundreds of physical enterprises. The report shows that for every $2 spent on the BTC in the dark-net transaction, the corresponding amount of legal money laundering is as high as $800.