At around 2 am on December 12, the Filecoin test network, which was postponed several times, was finally launched.

As the first and most important application of the IPFS (InterPlanetary File System) -based distributed storage and transmission protocol, Filecoin aims to provide strong incentives for IPFS, and is regarded as a feasible solution for the implementation and promotion of IPFS technology.

Once the project was proposed, it attracted great attention. "Usd 200 million US dollars an hour of huge financing", "supported by many top investment big coffee", "backed by Protocol Labs" … star project aura. Because of this, the launch and launch of the Filecoin testnet, which has experienced multiple delays, is still receiving much attention.

The role of the test net is mainly to allow various service providers to insert distributed servers into the IPFS network for data access services to verify whether the space-time certification and storage certification mechanism can be fully operated, and to test the entire IPFS incentive layer FIL. See if there is a difference in the distribution model of Filecoin's incentive mechanism or there are some problems and defects, of course, the official will also focus on the previously developed data modules in this test network to test the entire network data modules.

After the onion query, Filecoin ’s official testnet blockchain browser data shows that as of December 13th at 12:30, the current block production time of the Filecoin testnet is 45 seconds, with an average block production time of about 47 seconds. The block generation time is 1.5 minutes. At present, the block height has reached 2793, the total network computing power is 32.76TiB, and the average gas fee is 0.68.

Probably because the testnet was recently launched, many powerful miners could still join in the future, and the official also stated clearly that the FIL tokens generated during the testnet had nothing to do with the subsequent mainnet tokens and had no value. "Mining" incentives have not yet started, so only 11 miners have mined the block at present. Starting from the 12th place, the mining power of all other miners is 0.

According to the official Filecoin blog, the testnet phase will continue until March 20, 2020, and the mainnet launch window will be from March 23 to April 24, 2020. 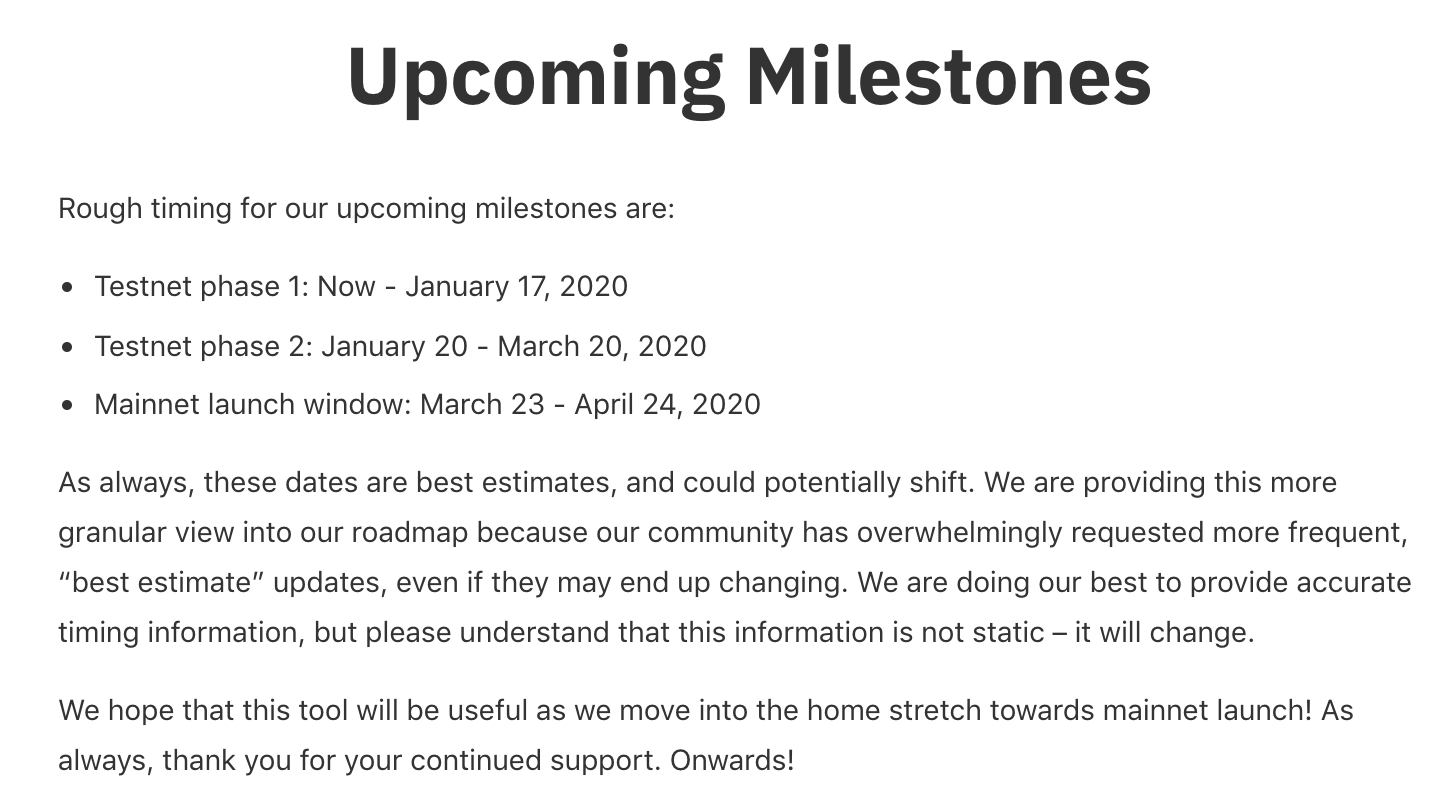 Among them, the test network will go through two main stages.

On the working Gantt chart shared by Filecoin, you can view the key work path and update time information of the project.

Where do the expectations for IPFS and Filecoin come from?

Despite four postponements, the launch of the Filecoin testnet and the approach of the mainnet still attracted great attention and added a touch of vitality to the weak market environment at the end of the year.

Investigating the reason, Filecoin and its underlying protocol IPFS brought great imagination and expectations from the beginning. Its technical goal of "replace the http protocol and build a faster, safer, more robust and durable web network" has been proposed once. It has attracted the attention of many technology enthusiasts.

As we all know, the development of the Internet is inseparable from the hypertext transfer protocol http, but with the explosive growth of the Internet, the disadvantages of the http protocol have gradually been exposed.

The http protocol relies on a centralized service network. Once the server fails or is shut down, users will not be able to access it. The centralized storage model has many shortcomings such as vulnerability, high cost, weak security, and weak privacy protection.

Unlike the http protocol that relies on a centralized service network, the IPFS protocol released by Protocol labs in 2015 is essentially a fusion of point-to-point network technology, BT transmission technology, Git version control, and self-certification A number of technologies such as file systems and decentralized point-to-point hypermedia transmission protocols are designed to change the existing storage and transmission mode of the Internet and build a faster, more secure, and more robust web network.

Comparison between http and IPFS

However, IPFS is only a low-level transmission protocol used to locate and transfer data and exist as an infrastructure; therefore, Protocol labs has launched the Filecoin blockchain project as an economic incentive system on IPFS, combined with the Token incentive model. A decentralized storage market has emerged.

It can be said that IPFS and Filecoin are closely related. Without Filecoin, IPFS is difficult to get up and running; the continued development of IPFS provides important basic support for Filecoin, and the popularity of IPFS will stimulate the market's demand for more secure and efficient distributed storage Filecoin.

Filecoin testing online, is there a new opportunity?

At present, the strong market influence of IPFS and Filecoin is mainly reflected in two aspects.

As early as the beginning of 2018, many institutions and communities have promoted IPFS as the next new mining currency with great potential. The pre-sale and bidding of IPFS mining machines have also been swept up by MLM, and retail investors are scrambling for IPFS. Mining machine, the "early bird" for investment mining.

Later, due to the slow progress of the Filecoin project, and the official has repeatedly stressed that mining will not be started before the mainnet launch, the "IPFS mining heat" gradually cooled, but with the launch of the Filecoin test network, the mining heat was activated again. , Many mining machine manufacturers have begun to promote

IPFS mining is different from Bitcoin and Ethereum, and IPFS itself cannot be directly mined without tokens. The Filecoin-issued token (FIL) is the only token in the IPFS system. The “IPFS mining” as advertised by the market is strict It should be called FileCoin (FIL) mining.

Only storage miners have systematic rewards. In fact, "IPFS mining" is for everyone to be a storage miner, and the mining of storage miners is the act of sharing hard disk resources and obtaining compensation. The total circulation of FIL is 2 billion, 70% of which is allocated to the miners of the Filecoin network, that is, rewards to users who provide bandwidth and storage, which undoubtedly greatly stimulates the enthusiasm of miners and improves the consensus of the project.

However, in the past two years or more, Filecoin has never officially disclosed the standard configuration of hardware equipment supporting Filecoin network mining.

Filecoin's proposed standards for hardware are:

1) Sector size: It should reach 32GiB. At present, the Filecoin testnet will temporarily support 1GiB "test sectors" to facilitate the miners to easily join the network, but such a small scale is not realistic for the mainnet. After the testnet is started, it will stop the 1GiB through a fork upgrade. "Test sector" support.

2) Mining machine size: at least guarantee 512GiB disk storage space, and the demand for storage space may be greater after the mainnet is launched. If the mining machine storage space is lower than 512GiB, it will not be able to get block rewards, and the completed Storage work will not count towards the computing power of the total network.

It is worth noting that Filecoin officially stated in this blog that these hardware parameters (sector size, effective storage, etc.) will be further refined during the testnet test, so "the first batch of hardware test configurations announced are not guaranteed "When the Filecoin mainnet is launched, it is still applicable to the storage mining of the mainnet FIL", "the standard test configuration of the mainnet may change." It is recommended that users who want to participate in the test do not purchase more hardware than the number required for this test.

Since then, on December 11th, the official Filecoin blog stated again when it released the future circuit plan that it would release an updated mainnet hardware test configuration in the second phase of the testnet (2020.1.20-2020.3.20).

It can be seen that there are still many variables in Filecoin's mining configuration. It is too early for users to start layout of Filecoin's mining. The majority of users should also pay attention to investment risks while approving the potential of the Filecoin project.

Study: long-term holders have not lost faith in Bitcoin 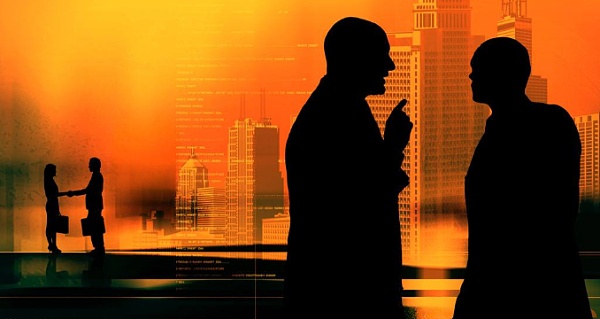