It is worth noting that during the same time period, the decline of Ethereum was even worse, from $ 141 to below $ 130, a drop of nearly 8%, a new low since mid-March.

At the same time, the declines of LTC, EOS, and XLM are also more prominent, all falling more than 7% in 24 hours.

However, about four hours before the major currency plummeted, data analysis company Chainalysis released a report on the crypto scam Plustoken.

With almost no bad news, the market seems to have found a culprit for the plunge. Some traders believe that the report's conclusions triggered panic in the market, which led to the plunge.

In addition, the company states that individuals associated with Plustoken have liquidated $ 185 million worth of stolen Bitcoins.

How does Plustoken running funds launder and cash through mixers and OTC brokers?

Scallion previously mentioned that according to a August information from the People's Procuratorate Information Public Network, the People's Procuratorate of Yancheng Economic and Technological Development Zone, according to law, was responsible for Chen Bo, Ding Zanqing, Peng Yixuan, Wang Renhu, Gu Zhijiang, and Yuan who were suspected of organizing and leading pyramid schemes The park approved the arrest and the case is now under investigation.

A spokesman for the Yancheng Public Security Bureau said that the police have arrested six suspects of PlusToken and are still trying to arrest the principal of PlusToken.

Although six people related to PlusToken have now been arrested, running funds are still circulating and cashed through independent OTC brokers, which mainly operate on the Huobi trading platform.

Although Chainalysis has tracked a total of $ 2 billion worth of cryptocurrency about the scam, part of it has been paid to early investors (perhaps to maintain investor fantasies about its high returns).

The company finally determined that about 800,000 Ethereum and 4.5 BTC were transferred to Plustoken's own wallet for money laundering.

To cover up the flow of funds, scammers have transferred more than 24,000 bitcoins using more than 71,000 different addresses.

Most of these transactions are made through mixers such as Wasabi Wallet. The mixer uses the CoinJoin protocol to obfuscate the flow of funds. 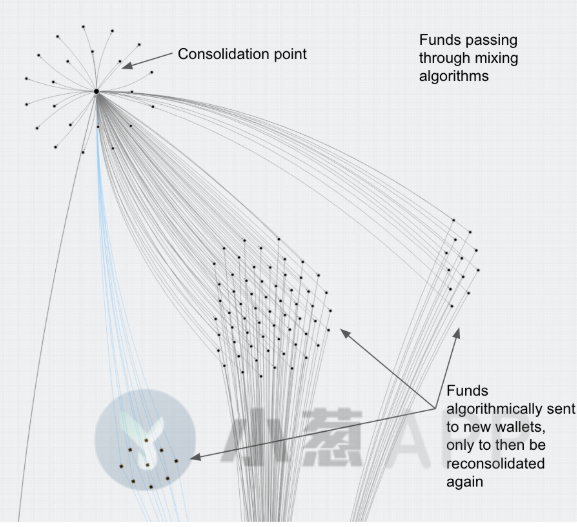 The typical way these mixers work is to split the funds into many new addresses before merging.

Of course, fraud also uses other more complicated methods (such as Peel chains) to confuse the flow of funds. Entities send funds continuously and quickly through multiple wallets, usually cashing a small amount of money at each step, and then transferring most of the cryptocurrency to the next wallet.

So far, PlusToken scams have cleared at least $ 185 million of stolen Bitcoins through OTC brokers.

2. Trading volume (USDT / BTC). This refers to the number of bitcoins that are traded on Huobi through Tether. PlusToken scammers have been swapping stolen Bitcoins for USDT, and may later convert them into fiat currencies. However, since these transfers are only recorded in Huobi's order book (not on the blockchain), we can't tell which of them are PlusToken scammers selling Bitcoin.

In terms of on-chain transaction volume, it can be seen from the figure below that starting in mid-April, the Bitcoin transferred from the PlusToken wallet to OTC gradually increased and surged before being arrested in late June. 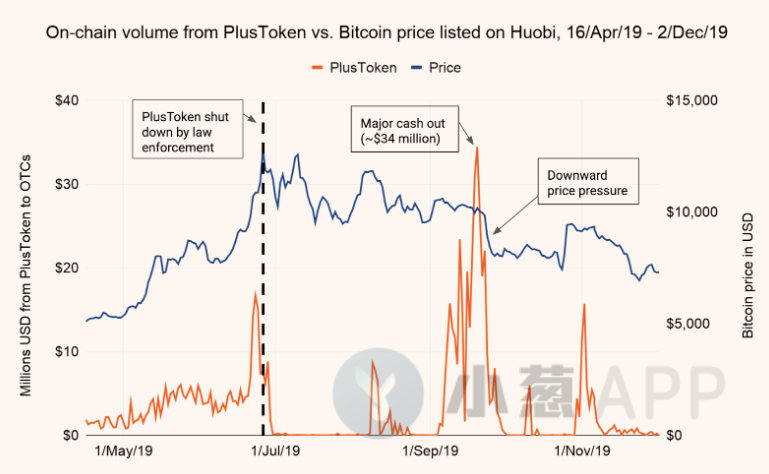 In the following months, the price of bitcoin was roughly in line with the peak value of bitcoin transferred from the PlusToken wallet to OTC.

As we have assumed, the peak of the on-chain transaction volume flowing to OTC has a certain correlation with the drop in Bitcoin price.

However, as Bitcoin transferred to the exchange did not start trading immediately, there may be a lag. On September 20, PlusToken wallet transferred 34 million USD worth of Bitcoin. The price of Bitcoin gradually decreased from September 24th to 26th, from more than 10,000 US dollars to about 8,000 US dollars, and adjusted around 8000 for about a month.

In terms of transaction volume, as we expected, starting on September 23, just a few days after the PlusToken wallet sent a large amount of bitcoin to Huobi OTC brokers, we saw an increase in bitcoin transaction volume on Tether. . Soon after September 24, the price of Bitcoin began to fall. 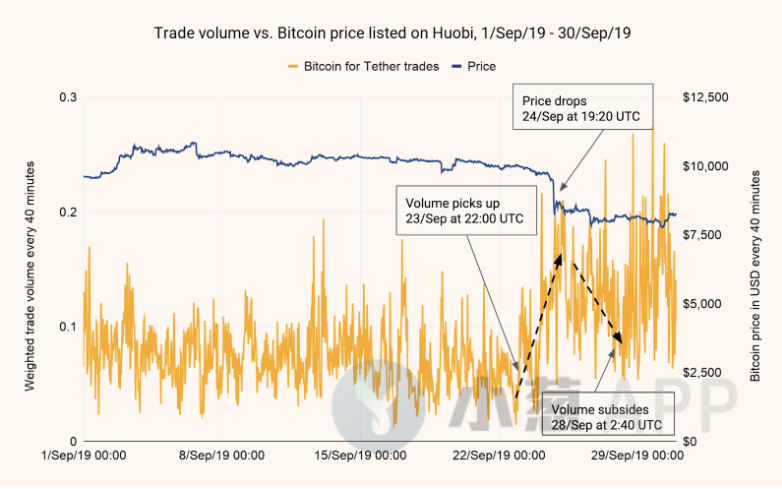 Therefore, we can initially conclude that the cashing of PlusToken running funds is related to the decline in Bitcoin price.

However, it is worth noting that we cannot prove a causal relationship between the two. Falling prices may happen by chance after cash out, or they may actually be caused by other reasons.

To address the cause-effect relationship, we performed a regression analysis to test how the increase in transaction volume between September 23 and 28 affected the price fluctuations of Bitcoin. We will analyze by volatility.

The regression analysis results show that from September 23 to 28, there is a positive correlation between the transfer of PlusToken to Huobi OTC brokers and the fluctuation of Bitcoin price.

Cashing out can lead to increased Bitcoin volatility in one of two ways. Either by directly increasing the supply of bitcoin, or by indirectly affecting traders' perceptions of the market, volatility is exacerbated.

Although PlusToken cashout is just one of many potential effects on the price of Bitcoin. But in the absence of the influence of PlusToken, during the time period we studied, media manipulation, algorithmic trading errors, or many other factors could not provide a convincing explanation alone.

At the end of November, data from cryptocurrency analyst Ergo showed that Bitcoin's drop to $ 6,600 or large-scale liquidation attributable to the PlusToken scam. Most public reports estimate that the company holds about 200,000 bitcoins. Ergo, after considering hidden funds and mixed currency transactions, found that the company holds about 187,000 BTC. One of these addresses liquidated 22,378 BTC in November alone (on average slightly more than 1100 BTC per day). Analysts point out that assuming all the mixed coins (129,000 BTC) have been sold so far from early August to today, an average of about 1,300 BTC will be sold per day. Then there are still about 58,000 BTC of unmixed coins in the addresses associated with PlusToken. If they continue to sell 1,000 to 1500 BTC per day, the duration of the remaining sell-off is between 1.5 and 2 months.

As it is not possible to distinguish between the PlusToken scammers and the OTC brokers on the trading platform, we cannot say with certainty that the PlusToken cashing has caused the Bitcoin price to fall. However, the liquidation of Plustoken running funds did result in an increase in the volatility of the Bitcoin price, and showed a significant correlation with the decline in the price of Bitcoin.

As mentioned earlier, at least 20,000 BTC (valued at $ 137 million) and 790,000 ETH (valued at $ 102 million) are still under the control of PlusToken scammers and have not been honored. In light of the above analysis, this is likely to continue to drive down the price of cryptocurrencies.

How do analysts, brokers and traders look at the market outlook?

Onion mentioned earlier that the latest weekly CME Bitcoin Futures Weekly Report (December 4-December 10) shows that larger brokers are still bearish on the outlook. The specific performance is that the long positions fell from 93 to 56 again, just giving up all the gains of the previous period of data, and the short positions rebounded from 256 to 285, basically recovering all the declines from the previous period of data. After the net position of this type of account was converted to net short, last week was the first time that there were more obvious signs of warming up, and with the results of this week's position adjustment, the impact of the position adjustment last week was partially erased, so it can be considered that Investors who have always been in the "leading position" of the market are still more resolute towards the market outlook, and the position adjustment in this period can be said to avoid short-term "turning more" changes in the previous period of data to "mislead" the market. .

In addition, with the continuous growth of long positions in Bitfinex exchange investors, short positions in the past week have seen a very significant reduction in holdings. This trend is consistent with the changes in retail positions in the CFTC positions report. However, during the past weekend, the bitcoin contract positions of the exchange continued to grow steadily, and the short positions showed a wave of jump performance. This performance to a certain extent shows that the short-term price has continued to fall After the multiple key supports officially approached 7000, the short-term market selling pressure actually showed more obvious signs of aggravation, which may mean that BTC's further breakthrough may be "inevitable."

Cryptocurrency rating agency Weiss Ratings tweeted today that despite recent ups and downs, most crypto assets remain above key support levels, but it remains to be seen whether they will continue. For now, the most reasonable expectation is more sideways.

This article is compiled exclusively by Xiaosong APP, and the full text is deleted. Please indicate the source when reprinting.