At present, one problem that runs through the field of digital assets is the pattern of excessive obsessive supply shortages.

The ultimate goal of creating digital gold is to rely on its scarce nature to give digital asset holders access to wealth that exceeds the value of the digital asset itself. This is like a seemingly useless physics that is valued through social consensus.

Therefore, the founder of a certain crypto asset will have a limited or fixed supply plan before it is released. When limited supply cannot meet the growing demand, the digital assets held by the holders will increase.

Hypothesis: Deflation is better than inflation 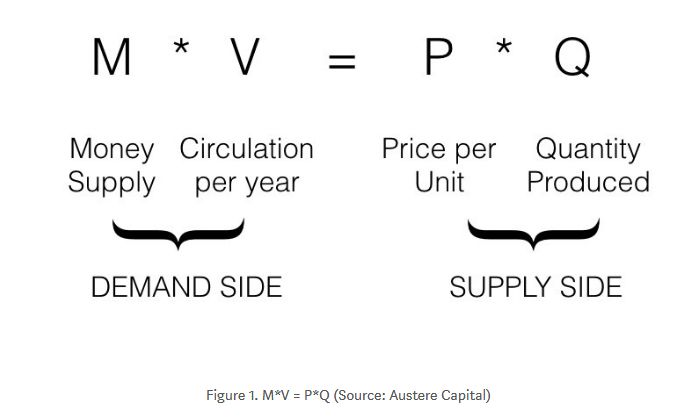 For a period of time,

M is the average amount of money supplied to the name in an economy;

V is the velocity of money circulation;

P is the price level;

Q is an indicator of the actual expenditure on new output goods and services.

Therefore, PQ is the level of expenditure on the name.

When Fisher first proposed the Fisher exchange equation , the Fed had not yet been established. In the era of gold and silver, the money supply needs to be backed by real money.

This currency-linked “golden” model puts the economy at a low-speed growth, as capital flows (such as investments in new businesses, loans, etc.) are suppressed by the available money supply, and accordingly, the money supply is again subject to the amount of gold reserves. And growth rate limits. The growth of gold reserves depends on the speed of gold mining. Therefore, the amount of money remains basically unchanged. On the surface, money looks "safe" but at the same time scarce.

Money linked to gold is vulnerable to bank runs. In uncertain times, holders will flock to banks to exchange their holdings for the same amount of gold.

In fact, the outbreak of the First World War severely affected the gold standard. In the 1930s, a worldwide economic crisis broke out, causing the "gold standard" to collapse completely. Countries have tightened trade controls, banned gold from free trading and import and export. The open gold market lost its foundation and the London gold market closed. It was reopened in 1954 until 15 years later. During this period, some countries implemented the “golden standard system” or “gold exchange standard system”, which greatly reduced the currency function of gold and made it withdraw from the domestic circulation payment field. However, in the international reserve assets, gold is still the final payment. Means, acting as a world currency, is still strictly regulated by the state.

Before the collapse of the gold standard in the 1930s until the end of the Second World War, the chaos and turmoil in the international monetary system seriously damaged the interests of all countries in the world.

In 1944, after fierce debates, the United Kingdom and the United States reached a consensus. In May of that year, the United States invited 44 representatives of the government to participate in the preparation of the United Nations to hold a meeting in Bretton Woods, signed the Bretton Woods Agreement, and thus established The gold standard system "the second international monetary system of mankind after the collapse.

In 1971, the United States announced that it would close the gold exchange window and stop fulfilling its obligation to exchange gold for the foreign government or the central bank to the United States. Due to the continuous depreciation of the US dollar, March 1973 once again triggered a wave of European countries selling dollars and snapping up gold. The Western European and Japanese foreign exchange markets had to be closed for 17 days. After consultations and final agreement, the Western countries abandoned the fixed exchange rate and implemented a floating exchange rate. At this point the Bretton Woods system has completely collapsed.

One of the shortcomings of monetary policy is that the central bank cannot directly influence the velocity V of the currency.

After the 2008-2009 financial crisis, even open market operations could not prevent the decline of the market. Faced with low employment rates and lost repayment capacity, consumers and investors have chosen to hold cash to hedge.

The Federal Reserve and other central banks have implemented the most daring policy experiment – "Quantitative Easing Policy (QE)." After implementing the zero interest rate or near zero interest rate policy, the central bank will increase the supply of basic money by purchasing medium and long-term bonds such as treasury bonds, and inject a large amount of liquidity intervention into the market to encourage expenditure and borrowing. Add banknotes.

Price stability and inflation M*V=P*Q is useful in helping central bank policy makers set an optimal monetary aggregate value so that GDP, or P*Q, remains at a steady growth level. The formula is particularly important after the abolition of the “gold standard”. On the other hand, the velocity V is calculated by dividing P*Q by M. Once we have calculated V, we can assume that V is constant in the short term.

For example, in the case of constant V, the total amount of money M is proportional to P*Q. In the short term, as long as M grows, GDP will grow. However, Q, which is constrained by the actual expenditure of new output goods and labor, and slow growth, can also be regarded as a constant in the short term, then M grows, correspondingly P growth, that is, inflation, and may even lead to hyperinflation .

Therefore, the monetary aggregate M can be used to control inflation, by increasing or decreasing to maintain price stability. In this way, central bank decision makers will enhance investor and consumer confidence in the economy, stimulate investment and consumption, and thus maintain stable economic development.

The issue in the field of cryptocurrency is obsession with the fixed money supply, in other words, the belief in the nature of deflation. The scarcity of money leads to currency appreciation, which is contrary to the nature of the depreciation of the French dollar (US dollar).

However, deflation is not a good thing in the real world. In fact, this is similar to the “gold standard”. In a deflationary environment, people tend to hoard money because they think they will add value. This hoarding behavior leads to a recession and, ultimately, to a vicious circle of deflation.

It can even be assumed that in a world without central bank cryptocurrency, no one will provide liquidity injection when capital flows are limited, which may cause the currency flow rate V to rapidly fall to zero, and the cryptocurrency market will quickly slide into one. In the long and desperate Great Depression.

So, while from the perspective of fiat investors, the parabolic growth of cryptocurrency prices is tempting, but for the real users of cryptocurrencies, this growth is very bad. Perhaps only one percent of short-term speculators enjoy this geometric growth.

But if you apply this equation to cryptocurrency valuations, you need to forget these complex economic relationships for the time being .

In cryptocurrency , M*V = P*Q is usually used to determine the target price, market capacity, market value of the Token , and even the valuation of the dApp and the protocol network .

His hypothesis is that by selling tokens to the agreement customers, Token holders can earn the revenue generated by the network or the agreement each year. In other words, the expected dollar-denominated income P*Q is divided by the Token supply M to get the flow rate V. The result can be considered as the target price, which is the price at which the cryptocurrency is traded with the US dollar.

There are two problems with this.

First, it is very difficult to calculate the income P*Q of an encrypted network because there is no revenue at all. (Some people say that trading income is also a gain, but the transaction income obtained through price increases cannot be counted as income, because this kind of income essentially depends on a mechanism similar to the Ponzi scheme. In other words, it is necessary to continue to have new leeks to take over. New admission funds support the so-called “revenue”)

Second, the author believes that V must be calculated in order to calculate this equation . Unlike the case of the traditional economy, V is a dynamic indicator that can be estimated and then used to calculate M.

A V that can be arbitrarily assumed, that is, a variable V that assumes a hypothesis without considering any token model and economic stimulus to the token holder, does not meet the criteria for becoming a quantitative.

In order to determine Token's dollar pricing, we need to estimate P*Q in US dollars. Logically speaking, this is reasonable – after all, almost all goods and services are currently denominated in French currency and will not change in the long run.

Therefore, the right side of the equation M*V = P*Q is in US dollars. This is an extremely important step.

We are now starting to calculate the revenue of the cryptocurrency network in US dollars.

The conclusion is that MV=PQ cannot be used to calculate the target price of the cryptocurrency at all.

Some people may think that we have been using the US dollar to analyze and compare the GDP of different countries. Similarly, there may be some way to compare different cryptocurrency economies in dollars.

All we need to do is calculate the P*Q with the native Token and convert them to US dollars at the end of the year.

However, this is not possible. Because the P*Q side is calculated from the currency at the beginning.

The utility of the network or protocol will always be measured by the value exchange medium under the chain. The network always uses French currency to get its value in the market, and Token's price has nothing to do with whether the customer is willing to pay for the service.

It's no wonder that the creators of these cryptocurrencies allowed the token to be divided into many smaller units to facilitate their use in the real world.

However, the ability of blockchain startups to influence Token supply can be theorized based on the observed circulation speed V, which can help the company regulate the actual price paid by end users. Regulations are made in the protocol design by issuing or destroying Tokens on their own.

Encryption project designers can closely monitor the circulation speed V to monitor the continuous and efficient operation of the distributed network. If V is too low, either due to protocol design or incentives for participants and users, the Token price will be raised, but this will result in a blockchain network that is not commercially viable.

However, estimating these values ​​is also very difficult because the circulation speed V is based on the frequency of use of the network by the project users and the incentives of the Token holders, but these conditions cannot be predicted in advance.

In addition, the more popular the blockchain network, the more users there are, the greater its Token value. This causes speculators and holders to hoard the token instead of applying the token to the decentralized platform.

For cryptocurrencies like Bitcoin, this cyclicity is not apparent. We think this is because Bitcoin has a transaction price that is completely unrelated to its intrinsic value. There may be other reasons, such as speculative or tax avoidance, which raises bitcoin prices, but this is beyond the scope of purely economic analysis.