Author: Yuan interlinked pulse still without authorization, shall not be reproduced!

NetEase circle officials announced that it will cease operations on February 1 next year, and a friend said that you should write something. After all, as soon as this product hits the market, you see its death.

Not only NetEase circles, including the universe developed by Baidu and 360 Love Diamond developed by 360, have also entered the ICU ward, only to officially issue a "death certificate".

Guoxin Securities made a more popular distinction. According to the agency, the main role of the Internet is to allow information to circulate on the Internet, and information is transmitted by copying (A to B). The "ledger" constructed by the blockchain is based on the characteristics of openness, transparency, immutability, peering, and easy traceability. It builds an infrastructure based on trust mechanisms to allow the value of data-based digital assets to circulate efficiently on the Internet. Value transfer occurs on the Internet (transfer from A to B, not copying from A to B).

In the information Internet paradigm copied from A to B, because of unlimited replication, data is not regarded as an asset and its value is not protected. Internet companies provide products to users for free: news content, information services, community exchanges, search services , Antivirus software, etc. This led to a malformed business model: wool came out of dogs and pigs to pay for it. Most of the business models of Internet companies are realized through advertising, commissions and value-added services. All three monetization modes require traffic, so "traffic is king" is hanging on the lips of Internet practitioners. Burning money to buy traffic has become the conventional way of Internet competition to the second half of the game. Taojiji, small yellow cars, and Panda live broadcast all burned to death.

The advent of the blockchain has allowed many Internet companies to take the lead in seeing the value of their incentive mechanism-originally paying for traffic, now they can "issue coins" or issue "tokens" in exchange for traffic. Money is spot and currency is futures; money is the actual debt to be repaid, and currency is the virtual debt that is not to be repaid; money is limited and coins are unlimited. Even if it does not involve financing, coins or tokens seem to be the perfect solution for Internet traffic. 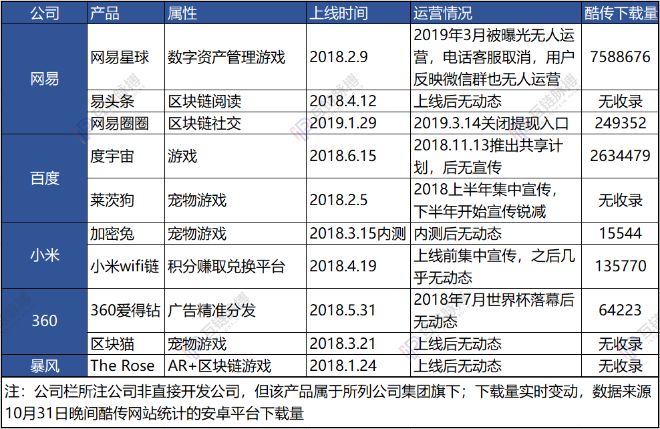 And these products have just brought a lot of traffic as soon as they are on the market. According to incomplete statistics from Kuchuan, NetEase's planet has more than 7.5 million downloads, the universe has 2.6 million downloads, and NetEase has 250,000 downloads.

I always have to pay back when I come out. The blockchain products developed by these Internet companies generally have a short life span, and most of them have no sound in 2019. The official announcement by Netease Circle that it ceased operations on February 1, 2020 is also considered honest. According to mutual chain pulse understanding, although there is no official death sentence for many products, it is virtually unmanaged.

Some people say that for NetEase, cheap traffic has accumulated, which means success. However, if there is no so-called blockchain concept + token incentive, there will not be so many users download. When users use these very low-value products in order to obtain a token, who will waste the social cost? NetEase Planet has stated that the application can help users manage digital assets such as credit data, attention, and Internet traces through blockchain technology to discover and guarantee the value of personal information.

However, the generation of digital assets is not so easy.

According to British classical economist David Ricardo, "the exchange value of effective goods comes from two aspects, one is scarcity, and the other is the amount of labor necessary to obtain it." Even digital assets need labor if they are to be converted into valuable tradable goods.

The product designers of the above-mentioned blockchain products are too casual about the definition of labor in the design of the token model.

First of all, consumer consumption behavior cannot be regarded as labor. Many so-called blockchain products treat users' consumer behavior as labor, such as reading articles and buying goods. Interesting headlines motivate users to consume content for the sake of traffic, and the consequence is sinking into financial mud. Blockchain products incentivize these consumption behaviors at the cost of their own tokens being worthless.

Secondly, don't expect users to make unilateral labor contributions to the product in the market. We saw that including NetEase Planet, Universe, etc., all called on users to pull people's heads for products, and then gave token incentives. But the product side does not need to repurchase these tokens in real gold and silver, so the value of the token will also be zero. It's like an offline shop, because the middleman brought him a lot of passenger flow, and then gave the middleman a check, saying that you find a store next door to exchange, are you willing to exchange it?

Third, if the token is digested in the system, the energy of the token will become lower and lower. Assume that the tokens generated by products such as NetEase are really valuable, but the consumption is to allow these tokens to participate in internal games and betting, and cannot exchange value with the outside to obtain energy, then the entropy of this system Will grow bigger and bigger, eventually entropy. The value of the token is also reset to zero.

Finally, how to create a production relationship of unfamiliar collaborative labor through token design. It is said that blockchain is a comprehensive technology that changes the production relationship. Based on the trust mechanism established by the blockchain, more strangers and organizations can work together to achieve large-scale collaborative labor that is difficult for individuals and existing social organizations to achieve. Or collaborative labor that requires the involvement of key intermediaries. Product functions such as NetEase Planet, NetEase Circle, and Universe can be implemented in centralized products, and blockchain cannot be used.

Unfortunately, the blockchain products developed by the aforementioned Internet companies are winning in all four of these points.

In turn, Internet product managers may avoid the above problems when designing their products, and their token model may succeed. Product managers must first abandon traffic thinking and turn it into value thinking. When designing a token, it is necessary to clarify that the value of the token comes from labor, and that the digital assets formed by labor are scarce and practical in the market. Such labor is best based on untrustworthy relationships, which can be trusted through blockchain.

For example, in the field of supply chain finance, companies use labor to digitize their accounts receivable, warehouse receipts, and logistics information, and use the blockchain's token credit records to achieve lenders' credible loans to enterprises.