At the moment, blockchain has become a hot spot for capital. From the central to the local, the blockchain has been mentioned many times, and many companies have cut into the blockchain circuit. Today, blockchain technology has extended to all aspects of economic and social aspects such as digital assets, financial applications, commodity traceability, copyright protection, financial management, and intelligent manufacturing. According to incomplete statistics of the Zero One Think Tank, as of November 30, 2019, a total of 1,543 venture capital investments were made in global blockchain projects, and the total amount of publicly disclosed financing exceeded 79.2 billion yuan (509 projects did not disclose the amount of financing).

The projects that were won were mainly concentrated in the two directions of digital assets and infrastructure / solutions. The number accounted for more than 58% and the amount accounted for more than 69%. In the segmented track field, exchanges maintain a high level of financing enthusiasm, financial and physical application scenarios or future development directions.

At present, start-up companies have emerged in the global blockchain field in various subdivisions, from the upstream underlying technology and hardware to the downstream vertical applications in various industries and peripheral services.

Source: The industry distribution of the Global Blockchain projects invested by Zero One Think Tank is relatively concentrated, mainly in digital asset related and basic technology facilities / solutions, with the number accounting for more than 58% and the amount accounting for more than 69%. In addition, the number of investment in industry service projects reached 204, and the number of financial, physical and on-chain application scenarios was over 100.

Figure 2: The amount and amount of the first-level classification financing of blockchain applications 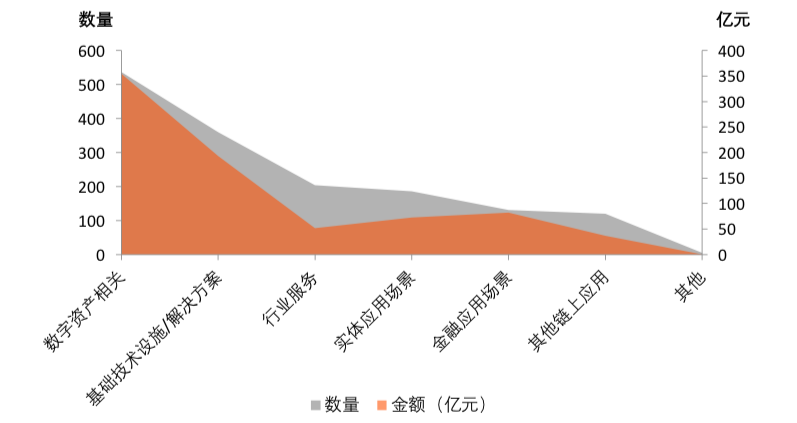 From the perspective of blockchain project financing over the years, digital assets have led the strongest market, and the proportion of financing each year remains high. Of the 19 financing projects in 2013, 12 were related to digital assets; in 2018, they reached a peak of 216.

From 2018 to 2019, the gap between various types of projects has gradually narrowed, and blockchain applications have become more diversified. As the value of blockchain is widely recognized, more and more industries are proposing their own blockchain solutions.

Figure 3: Trends in the amount of financing in the first-level classification of blockchain applications over the years 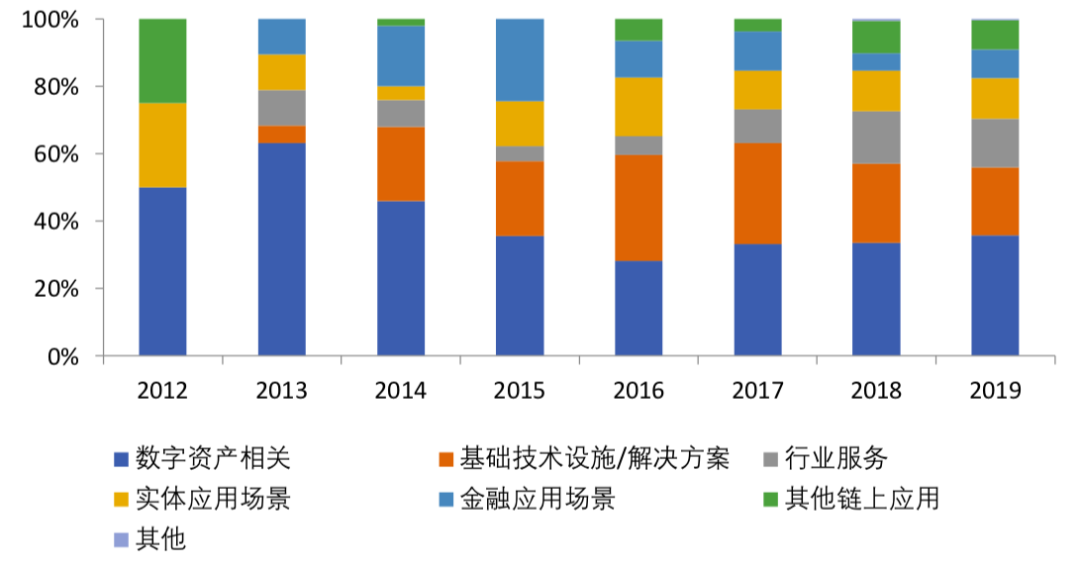 Source: Open Channel, Zero One Think Tank It is worth noting that since 2012, the amount of blockchain financing has maintained a steady growth trend. In 2019, except for financial application scenarios, the remaining 6 types of financing have all fallen by about 30% compared to 2018. Especially after the 10.24 speech, the industry services mainly based on research consulting, website & media were greatly affected, and the amount of financing in November was almost cut. 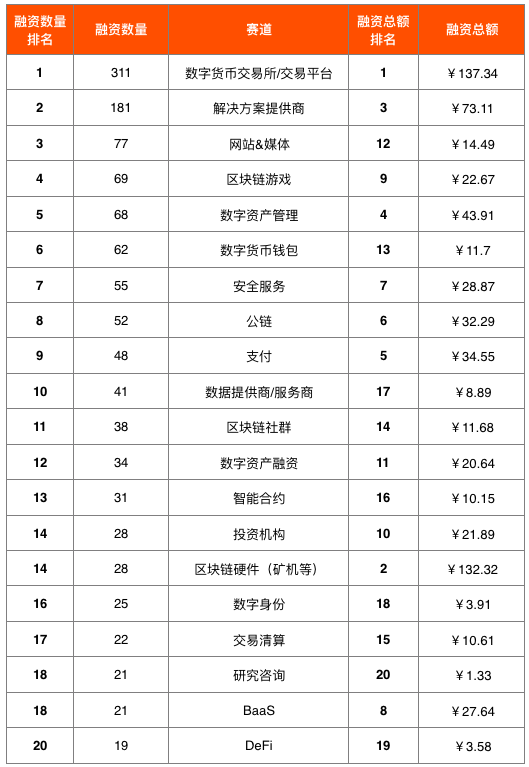 Note: Zero One Think Tank only counts the publicly disclosed financing amount, and converts the amount into RMB at the exchange rate on November 30.

In the Top 20 list of global blockchain financing tracks, the first-level classification of digital asset-related, infrastructure technology / solutions and industry services has the most subdivided tracks on the list, with 5, 6, and 4 sub-sectors respectively ; in finance In terms of physical application scenarios, there are fewer tracks on the list. Only the three tracks of payment, transaction clearing and digital identity have more projects to be financed.

On October 24th, the Political Bureau of the Central Committee of the Communist Party of China conducted the eighteenth collective study on the current status and trends of the development of blockchain technology. Innovative development.

CCTV commenters also pointed out that the application of blockchain is not speculation, but hopes to support the real economy through this technology. The perfect combination of blockchain and application scenarios is the correct way to open in the future, and it is also the direction strongly advocated by the country.

Most of the leading companies in the United States, financing rounds focused on strategic investment

From the perspective of the number of blockchain financing tracks, the digital currency exchange / trading platform has always been the most popular track in the blockchain field, and it is also the most crowded track. The track's head project financing is in the middle and late stages, and the average investment for a single project is more than $ 100 million. Among them, Bakkt topped the list with $ 182.5 million in Series A funding; Coinbase has received two rounds of $ 100 million in funding.

The United States has the largest number of blockchain projects, with 13 distributed on various mainstream circuits. There are 6 in China, focusing on websites & media, and also involving application scenarios such as blockchain games. From the perspective of financing rounds, 56% of the projects received large financing in the strategic investment stage. The round A and previous projects generally had lower financing amounts. Only the US cryptocurrency investment management company CoinTracker received $ 225 million in round A financing. 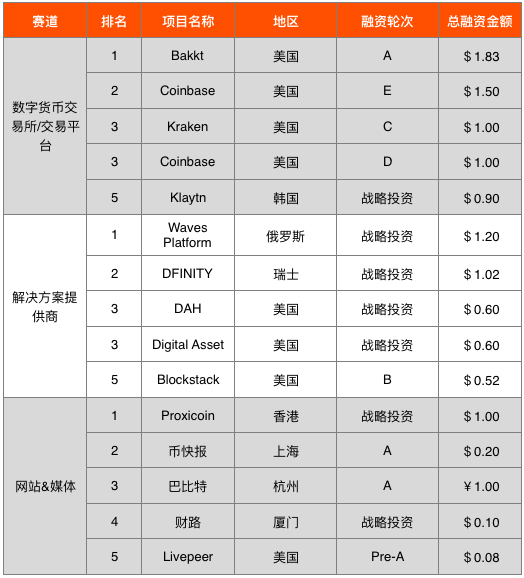 Morgan Creek CEO: Bitcoin should be in everyone's portfolio